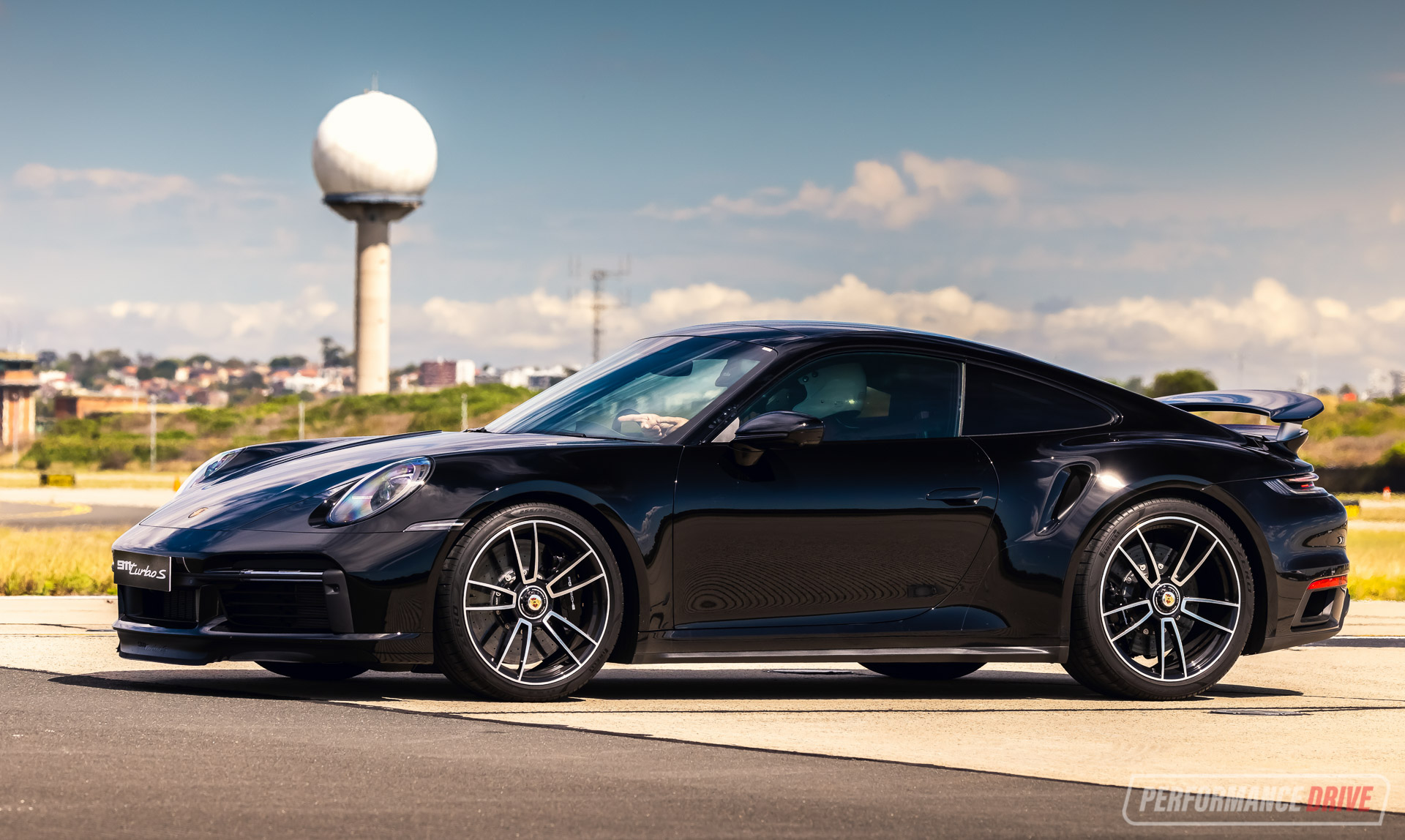 The Porsche 911 Turbo is a proper legend of the motoring world. It’s been around for generations, and the same essential formula has been carried through the entire way. That alone draws in, justifiably, a huge amount of respect from car and driving fans. And now the all-new model has just arrived in Australia. What better place to sample it than on an international airport. 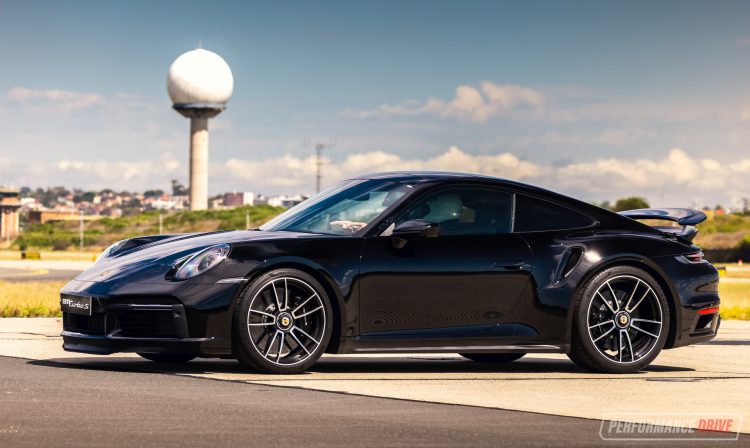 Wait, what? Yep, Porsche Australia has managed to find and pull all of the right strings to book out a runway at Sydney’s international airport for a day of launching starts and high-speed runs in the 2021 Turbo S. And we mean high speeds. We hit around 306km/h (it could have been more but we weren’t concentrating on the speedo), and the instructors were hitting 320km/h.

Keep in mind this isn’t technically a supercar or a hypercar. This has four seats, power everything, climate control, and normal door trims and a decent boot. Even so, it is one of the fastest and quickest-accelerating combustion-engined vehicles currently on the market. Porsche claims 0-100km/h takes just 2.7 seconds, with 0-200km/h crossed off in 8.9 seconds. 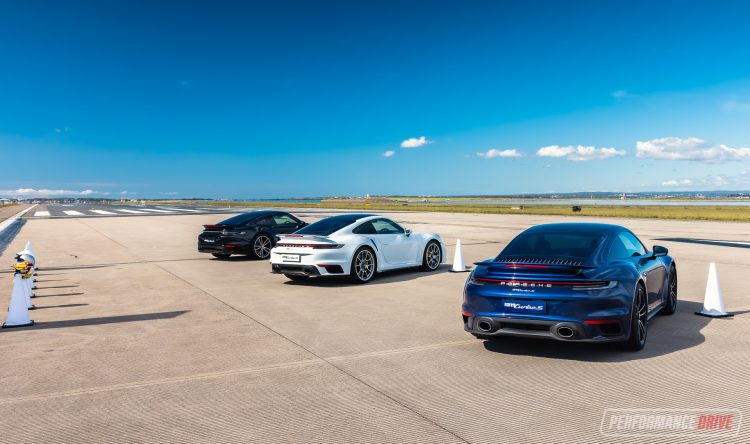 It definitely feels it. Porsche gave media a couple of runs on runway 16L/34R (for all the airport fans) to try it out. Unfortunately we weren’t allowed to attach our Vbox to the car, or tack on our GoPro to record the runs due to strict security measures and time constraints. But we were able to sample the insane launch control system over a 0-400m run, and then for the second run stretch the 911’s legs over 1000m with a rolling start.

Off the line, even as a driver, prepared for the impact, it is pretty much impossible to keep your head completely stable during launch control. It is that sudden. The instructors were telling us the car generates about 1.2G during this process. We’ve driven hundreds of cars over the years, including AWD Lamborghinis and fast Ferraris, but we can’t remember there ever being a car that takes off quite like this. 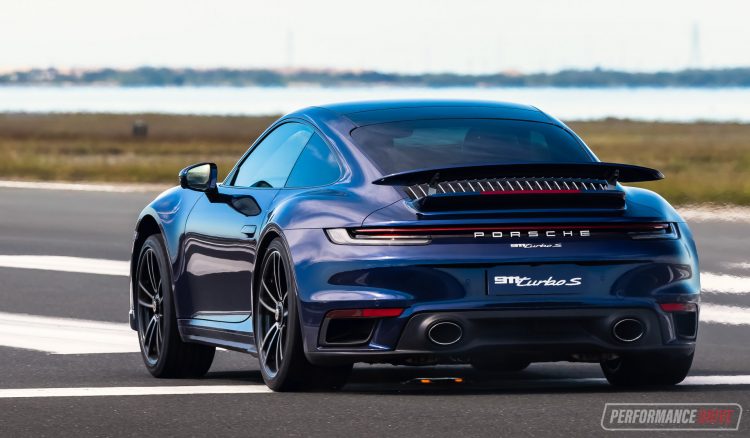 There is absolutely no wheelspin. Not a hint. It almost pops the front wheel into the air. And it’s easy to launch. You just need to press the brake pedal hard, in Sport or Sport Plus mode, mash the throttle, wait a second or so for the boost to build, then release the brake. It’s off. There’s a slight thud as the dual-clutch transmission engages, but from there it catapults ahead, hard and relentlessly, through each gear until you’re fizzing with anxiety.

Usually when cars pass around the 250km/h mark they start to slow as the laws of aerodynamics really come into effect. But in this, it seems like you’re driving in space. It’s not until about 290km/h that it starts to slow its rate of progression, but only slightly. This isn’t a supercar so it isn’t quite as sleek as one, and Porsche had applied drastic changes to the aero for this new model to help it stick to the ground. And in that sense, 300km/h in a relatively short distance is double-impressive. 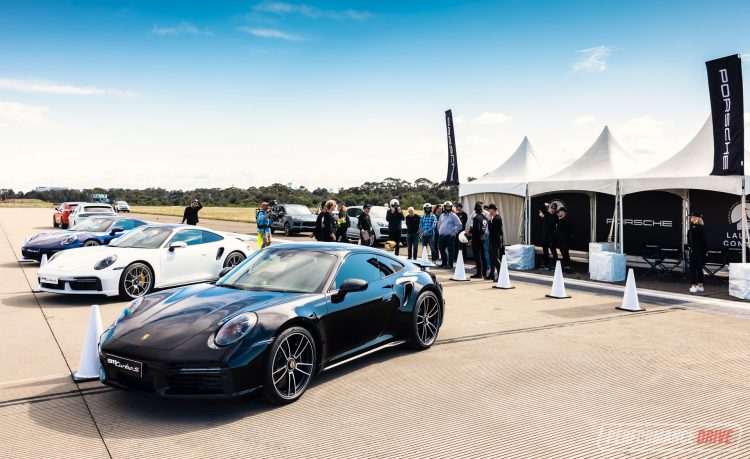 For example, there’s a new pneumatically-controlled front spoiler system that moves around to accommodate the conditions and the drive mode selected. The electronic rear spoiler is also larger than before and 440 grams lighter, and can be set to three different positions including a new wet mode setting. Obviously the underbody is pretty much completely flat, overall helping to see a 15 per cent increase in downforce over the old model. In fact, in the Sport Plus mode the car is able to generate up to 170kg of downforce.

At about 300km/h the instructor suggested we gradually back off and apply some braking. It’s here where we could really feel all of this advanced and active aero doing its thing. At the end of the strip there’s a slight kink back towards the taxiway. So, after hitting 306km/h, or whatever it was, we needed to jump onto the anchors, hard, then dial in a small amount of steering. This is a recipe for disaster, in a normal car.

The rear end is suddenly unweighted and then lateral force comes in, which could send the rear end out and around. Not here. The mighty 911 Turbo S just walks around like it’s not even bothered. It really is a sensational vehicle, and a masterclass in engineering especially with the engine’s weight sitting behind the rear axle. 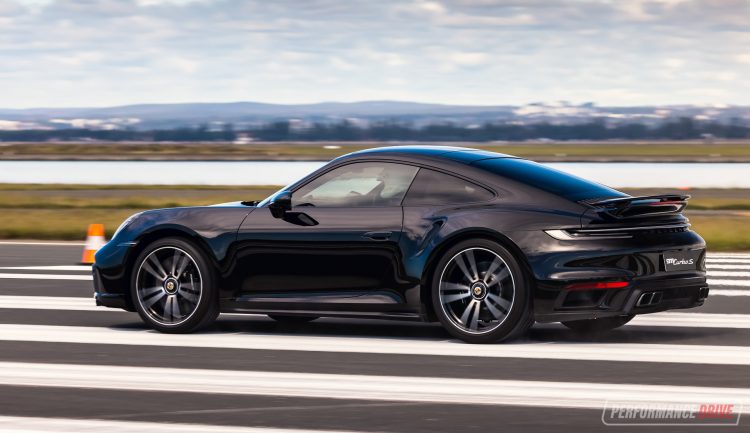 As for the engine, it is a new 3.8-litre twin-turbo flat-six, just like past generations – why fix it if it ain’t broken, right? Well, it seems pretty similar to the previous engine but there are many new parts and a new tune. Two variable geometry turbochargers are used, with larger turbine wheels (61mm, up from 55mm), with electronically-controlled wastegates to optimise response and consistency. There’s also piezo injectors, and a completely new intake system with four intake points overall.

In recent tradition, the 911 Turbo has featured big scoops behind the doors, in the rear guards. These have, up until now, fed the intercoolers, with extraction vents behind the rear wheels – like on the retro 959. Now, these big, iconic side pockets feed the engine’s intake. The air filters are essentially in the rear guards. 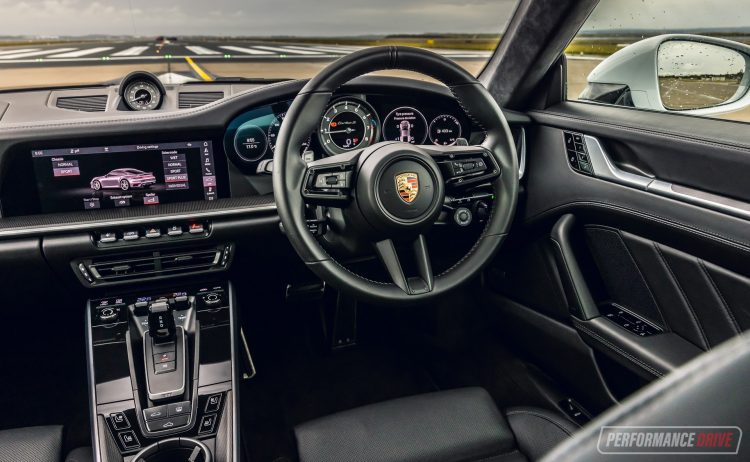 Although this is not a complete review, you might be wondering are there any downsides? Well, the price is definitely one. Yes, the performance and heritage is unrivalled. But the asking price is $473,900, which is up from the previous Turbo S starting price of $461,200. Another thing, the official fuel consumption has jumped from 9.1L/100km with the old 427kW engine, to 11.5L/100km. However, much of this is due to a switchover to the more realistic official testing protocol. The average emissions has also climbed from 212g/km to 263g/km.

Overall, what a car and what an experience. Obviously the coronavirus pandemic has opened the door for events like this, as Sydney Airport (like others) is running significantly reduced operations. For me personally though, the 911 Turbo is what will remain firmly etched in my memory bank for decades. It has always been my one-and-only dream car. And this is the first time I have driven one. They say you shouldn’t meet your heros, but I’m glad I have. It has verified all of those boyhood dreams.