TeamVodafone drivers Craig Lowndes and Warren Luff have taken out the first V8 Supercars endurance race of 2012 at the Dick Smiths 500 at Sandown Raceway. 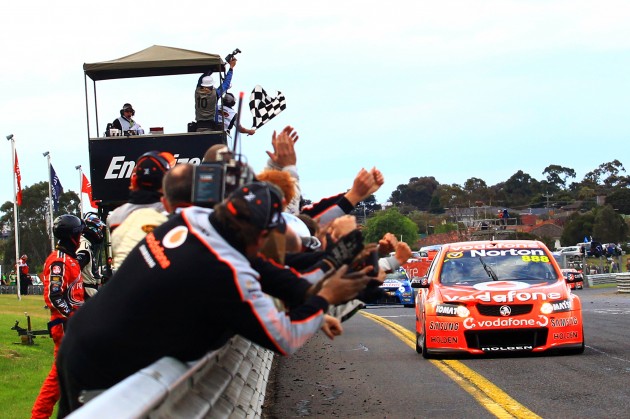 The talking point of the race however was what happened in deciding the two following positions. Ford Performance Racing’s Mark Winterbottom (co-driven by Steven Richards) led home Lowndes’s TeamVodafone teammate Jamie Whincup (partnered with Paul Dumbrell), but the Ford pilot did it the hard way with a very aggressive move late in the race.

The reigning champion wasn’t happy with Winterbottom’s move (check out the race highlights below and have your say) which saw his Commodore run off the circuit and nearly into the sand trap. Whincup refrained from making any bold statements about the incident post-race.

“I’d be lying if I said that pass was on at the end, it was a late lunge,” Whincup said.

“I congratulated Frosty after the race but I didn’t think that pass was on. At the end of the day it’s not a huge deal because my car wasn’t fast enough to win the race. But that’s just my opinion.

Winterbottom naturally had a different side of the story and believed the overtaking move was perfectly legal.

“Sometimes you are on the end of it and sometimes you are the guy who does the pass. No doubt if I was in the same position Jamie would have done the same to me. I feel good,” Winterbottom said. 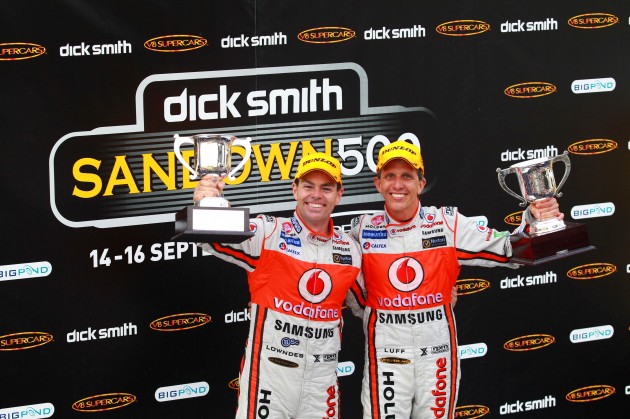 “The only place I had a really good run was at turn six. I braked deep in there, made it stick and got P2. I was really happy with the result.
Lowndes had little to complain about after the race with his eighth 500km endurance race win (fifth at Sandown).

“It was a very straight forward race for us,” Lowndes said.

“We worked on the car over the course of the stops. It wasn’t quite what we liked at the begining, but at the end of the day we got a good sweet car. It’s balance was really nice and I could really push on.

“We had one little issue in our last stop, so we lost a little bit of time to Jamie. But we were still second and with his little mistake at turn two gave us the lead of the race. From then it was really head down and bum up and drive the car as fast and hard as we could, as smooth and straight as possible.

“To bring it home, the victory was all the more sweeter to have my 100th victory and to give Warren Luff his first V8 Supercars victory for me was more exciting.”

Despite bringing up his century of wins, Lowndes had his eyes on the next race which happens to be the biggest in Australian motorsport.

“We’re looking at three weeks time and getting another victory around the mountain,” Lowndes said.