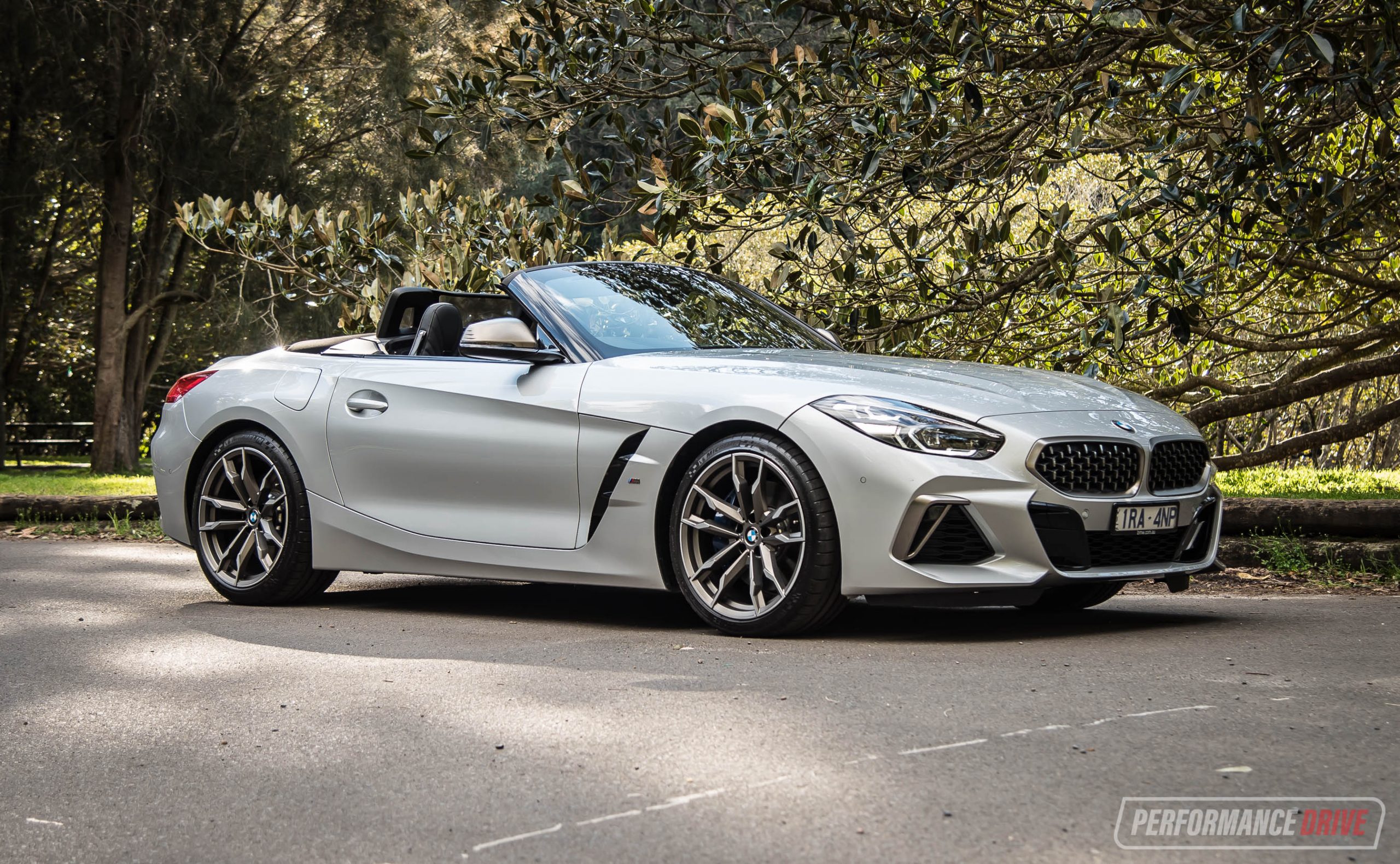 Have you been waiting for BMW to offer a convertible version of the M2? Well, that probably won’t happen but this, the 2020 BMW Z4 M40i, is pretty much the next best thing. It offers similar power and performance, only it’s based on the company’s more modern CLAR platform as opposed to the old 2 Series layout. This means it comes with the latest and greatest in driving dynamics, safety, and technology from BMW. 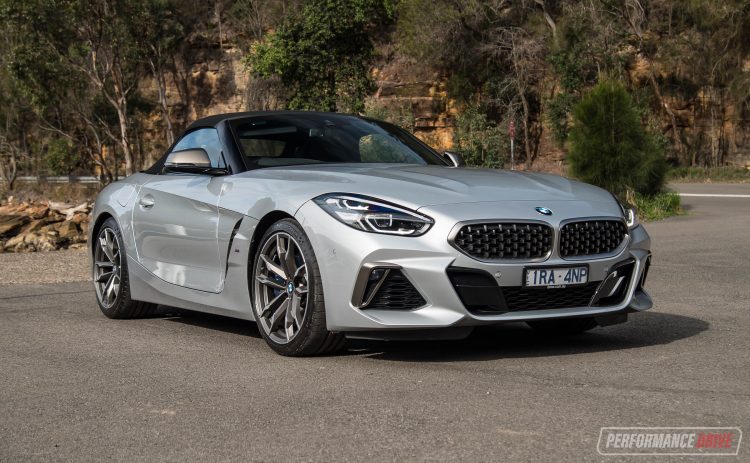 BMW announced an engine tune update for the flagship M40i not long after launching the new Z4. The B58 3.0-litre turbo inline-six originally developed 250kW and 500Nm, but now that’s bumped up to 285kW – a similar update will soon arrive for the Toyota GR Supra, which shares the same BMW platform and powertrain. 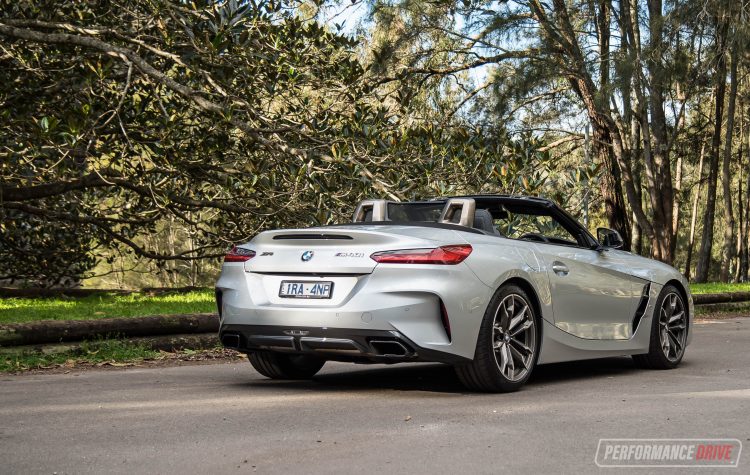 It’s a classic roadster design, the new Z4, with a textbook side profile incorporating a long and elegant bonnet, set-back cabin, and stubby rear end. We especially like the deeply-cut side vents behind the front wheels. They don’t look that prominent in photos but in person, they’re really deep and aggressive. And genuine, too, helping to extract heat/turbulence from the front wheel well.

Going for the M40i means you get dished 19-inch alloy wheels with staggered widths, measuring 9.0 inches wide on the front and 10 inches on the rear. These are wrapped in the excellent Michelin Pilot Super Sport tyres, with 255s on the front and 275s on the back. Behind these you’ll find a bespoke M Sport braking package, denoted by blue-painted calipers. The M40i also comes with sports suspension with adaptive dampers. 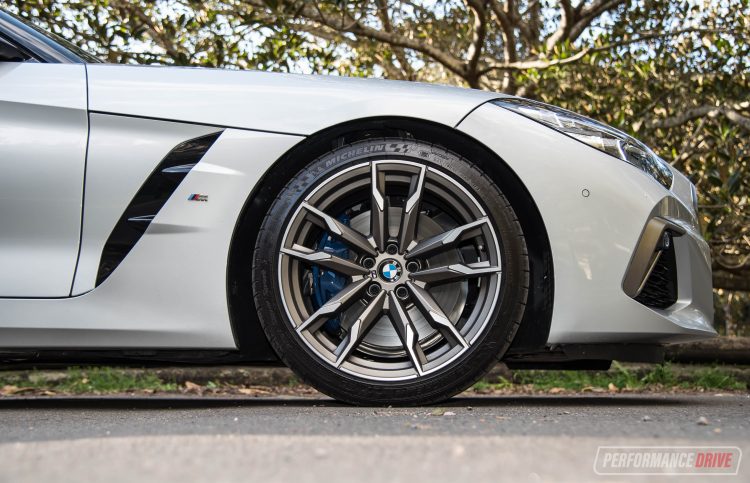 Taking a look inside, we love these stylishly-stitched leather sports seats. They look cool, which is pretty important on a convertible as the seats will be seen by onlookers, as opposed to a closed-roof vehicle. Not only do they look cool though, they also cuddle you nicely, and you have adjustable side bolsters to play with so you can adjust how big the hug is.

The seating position is very low, in character of a traditional sports car, but you can adjust the seat height if you’re feeling a little too submerged. With the roof down the open-top experience just takes over, making you feel as free as a bird. With the roof closed though it can feel quite enclosed and almost claustrophobic. Even more so than a typical coupe because at least with that you have the added cabin volume of the rear seat area. 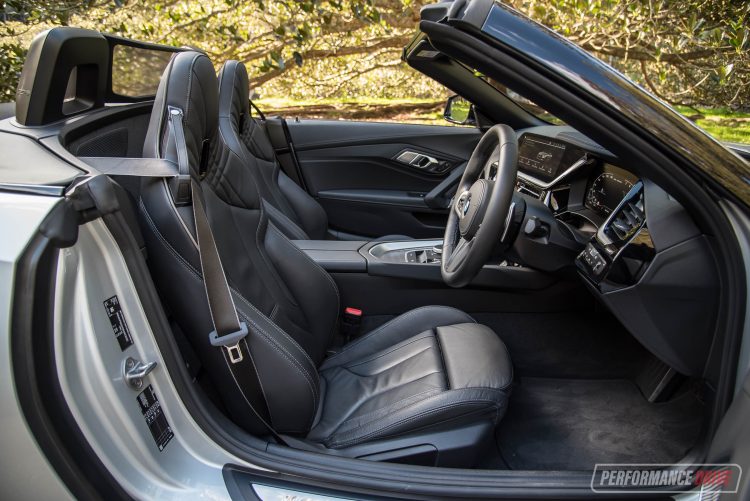 Speaking of space, there isn’t much of it for random nicknacks. You have a shallow centre console bucket with a split lid setup, opening to two cup holders and a small cavity in the middle. This means you need to leave the split lid open to carry drinks, although BMW has been a bit clever about it by allowing you to close the driver’s side lid panel.

In front of the gear lever there’s a wireless phone charger pad, and then slender door pockets, and a narrow shelf in the bulkhead behind the seats. The bulkhead also incorporates a small box to secure more sensitive items, and there’s a portal to the boot area. 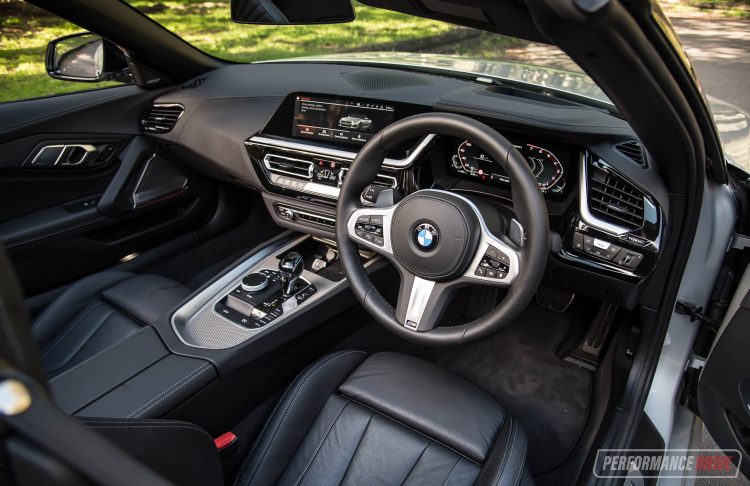 There is a decent-size boot, for a sporty roadster. The specs say 281L but it actually seems a bit bigger than that. We guess the main cumbrance is that the floor doesn’t drop very deep, but it is wide. Being an electric-folding soft-top, the design has to allow for storage of the roof when it’s down. On that note, the roof can be raised or lowered at speeds of up to 50km/h, and the operation takes around 10 seconds.

As for the standard tech and gizmos, the M40i is the flagship model so it’s no surprise it comes with all the fruit. The dashboard showcases a 10.25-inch multimedia screen, with touch or iDrive controller functionality, and the instrument cluster houses another 10.25-inch digital screen with configurable display options, including real-time power/torque readouts. 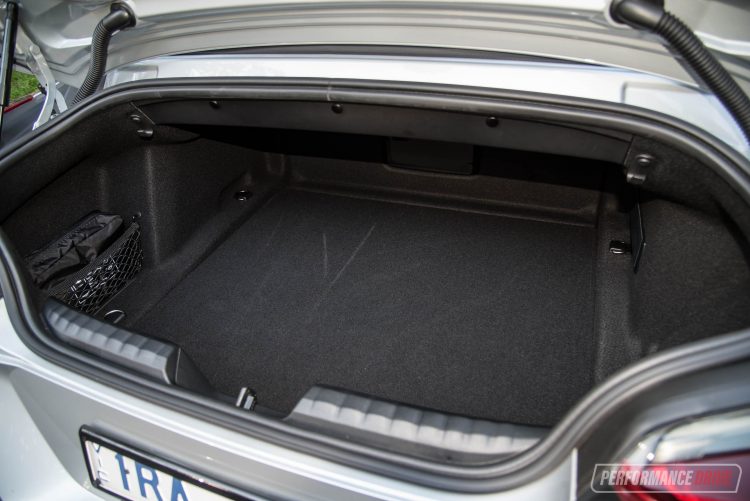 The power from this seemingly innocent 3.0-litre turbo inline-six is incredible. Under full throttle kick-down, from, say, third gear into second, you get this enormous force that pushes you hard in the back, accompanied by rapidly-accelerating scenery and squirming rear tyres as they bite for traction. During our testing on a private road we were not expecting it to dip below the 15-second mark across 0-200km/h.

It achieved it easily. We clocked the hauling sprint in just 13.97 seconds. That’s an insane time for something that isn’t pitched as a hardcore sports car. Our Vbox Sport, which runs at a highly accurate 20Hz as opposed to some data loggers (including the old Vbox) that run at 10Hz, showed a 0-100km/h time of just 4.23 seconds. 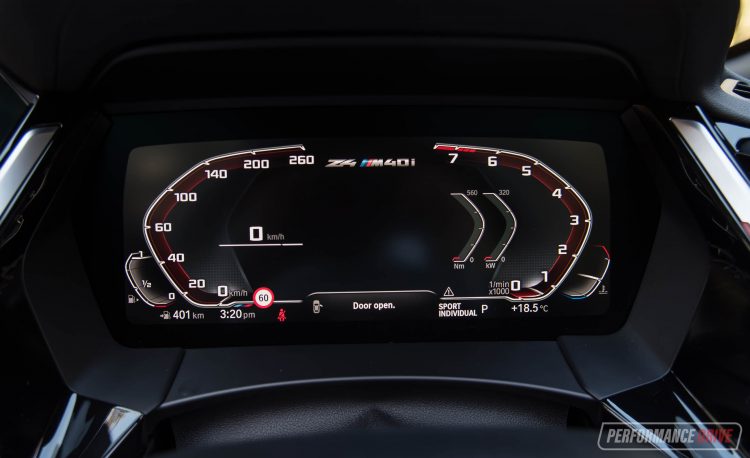 Although our 0-100 dash couldn’t quite hit BMW’s claim of 4.1 seconds, we think, on a proper drag strip, the car could easily achieve the claimed time. Our performance tests are conducted more to give you an idea of what the rear-world performance is like. And in that regard, 4.23 seconds from just 285kW is astonishing.

Peak torque is unchanged from the pre-update, at 500Nm, but it is spread wider across the rev range. All of it is now available from 1800rpm to 5000rpm, whereas before it was spread more thinly, between 1600-4500rpm. And you can feel it out on the road. Find yourself a nice windy road and just leave it in third gear and this engine will provide more than enough grunt and response. It is, needless to say, more fun to use the paddle shifters and really engage with the car, however.

Fuel consumption has gone up, unfortunately… by 0.1L/100km, to 7.5L/100km on the official combined cycle. During our week we recorded an average of 11.6L, which is a big step up from our previous 8.0L in the 250kW version. We think we just had a bit more fun with the go-pedal this time around. In the real world, after extended ‘normal’ use we’d be confident in saying you could expect around 9.0-10L/100km. That’s not bad for a car with this level of acceleration and speed. 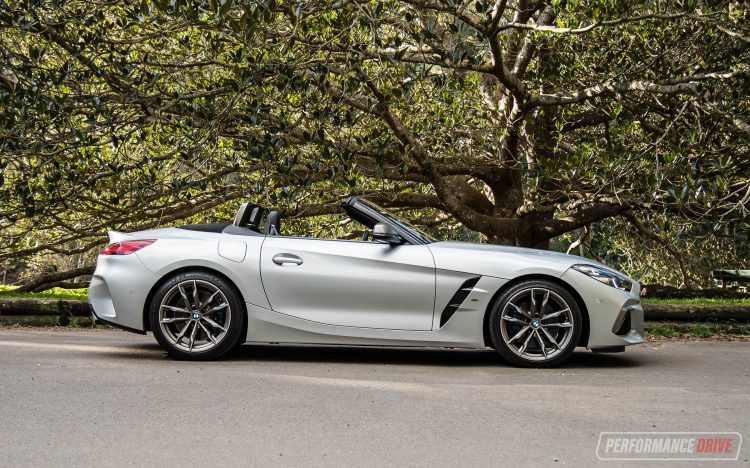 It also translates to excellent power efficiency. Using a little calculation we like to include in all of our reviews, dividing the power by the official fuel consumption, we see this equates to 38kW:L/100km. Anything over 30 is usually awesome. It essentially means the engine is extracting every bit of performance from every drop of fuel. Obviously this engine doesn’t consume the official 7.5L/100km while generating 285kW, but it gives you an ideal of its broad capability.

Around corners the Z4 really excels. We took this test car for a blast along one of our favourite winding roads and couldn’t really find a fault. The ride is pretty firm in normal conditions, but it totally makes sense during high-tempo driving. You can chuck it from left to right, through switchbacks, and the rigid CLAR platform and taut suspension keep the car confident and stable.

You can apply bags of power at the apex and the 275 rear tyres hook up beautifully as well. Even if you’re a bit early on the gas, the outfit just catapults away from bends. Throwing some mid-corner bumps into the mix is usually a real test of a car’s rigidity and control, but this seems to always maintain its commitment, with all wheels feeling firmly planted on the ground. It’s a lot of fun to drive. We really should have put together one of our ‘4-minute fang’ videos for you so you can see for yourself. 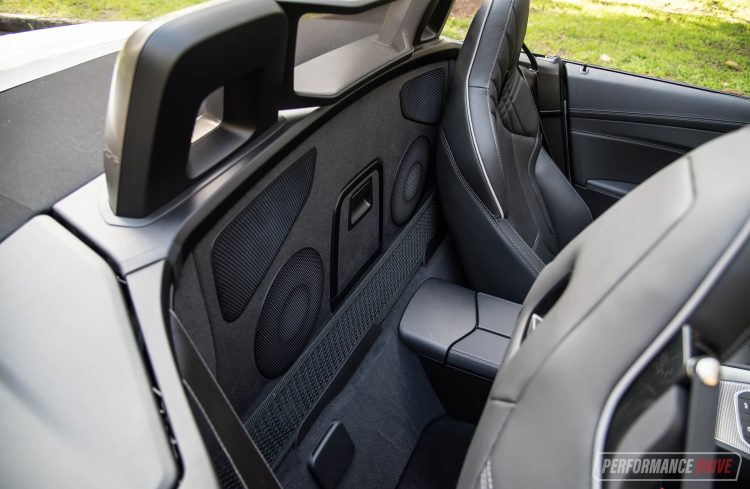 This is a sick little roadster. There’s so much power and that howling inline-six engine sound is to die for. Really, we can’t think of a better combination for a fun, open-top sports car; smooth and luscious inline-six with more than enough grunt, and all held together by BMW’s solid CLAR platform.

The Z4, like many roadsters, is often labelled as or regarded as a soft, hairdresser’s car. If you take one of these for a proper test drive though, along a nice windy road, with the roof down, you’ll see it’s actually a hard-edged weapon. It offers sensational grip and cornering capability, and superb powertrain performance and engagement. Both of which are unmatched in this market segment as far as we’re concerned. It is, as suggested at the beginning, a BMW M2 convertible. It’s just a shame about its price, which is actually $25k more than the M2 Competition.