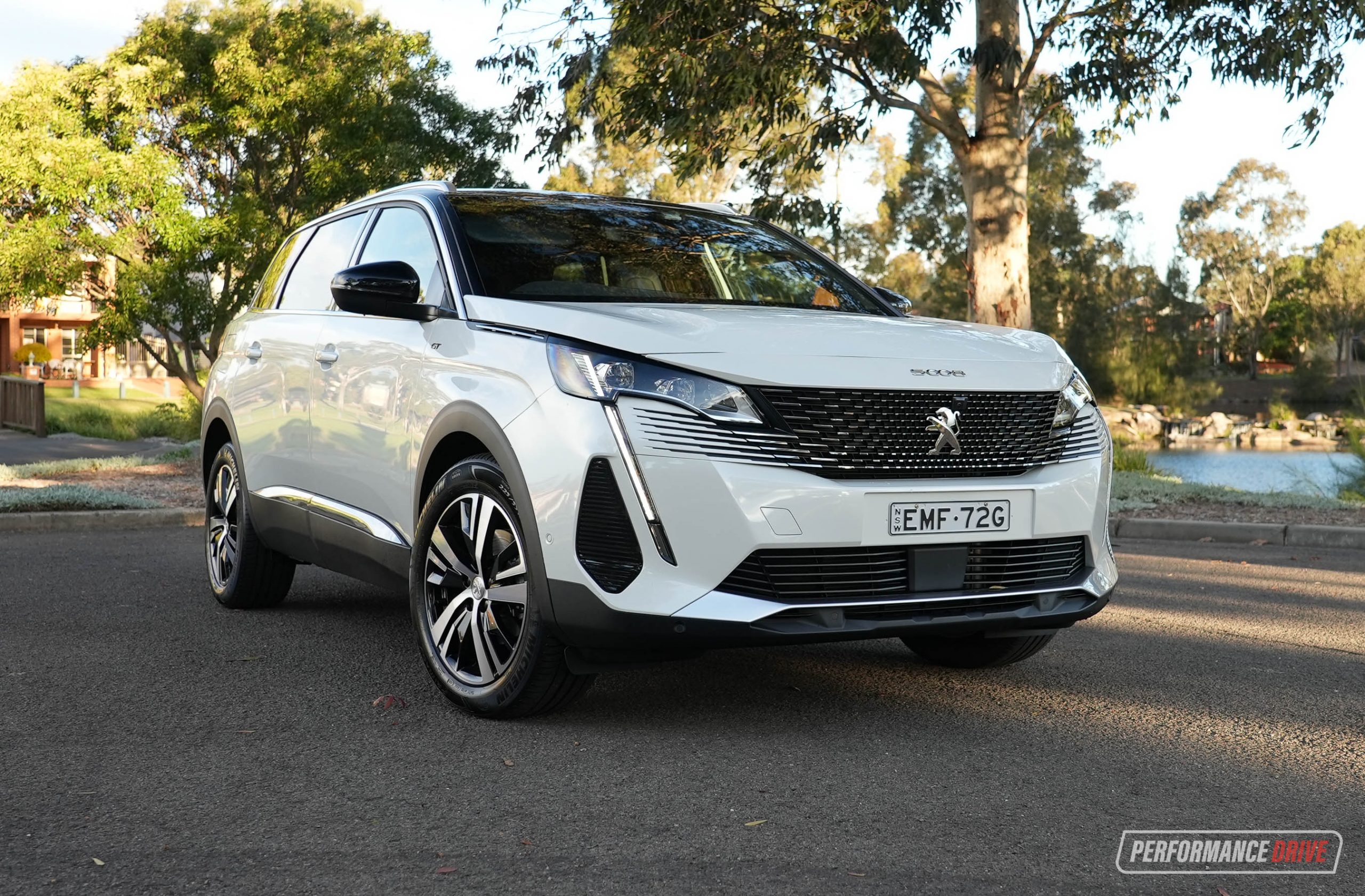 Part people mover, part SUV. The 2021 Peugeot 5008 GT is an interesting concept as it blends a versatile interior with the go-anywhere attitude of an SUV, while showing off a very suave and sophisticated European design. 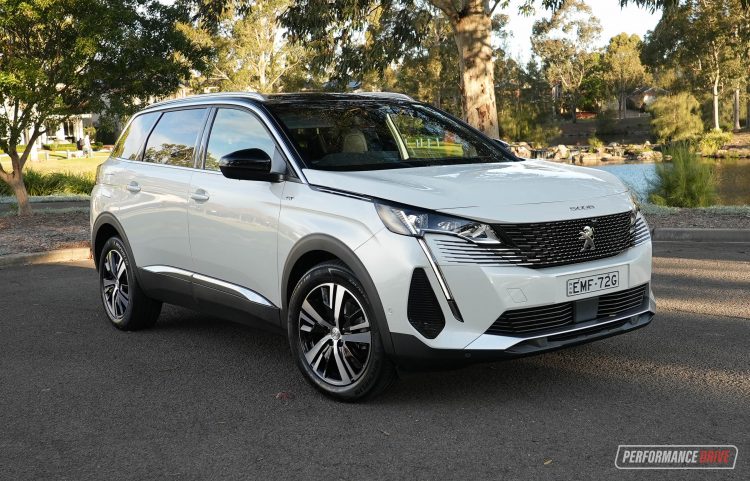 Here we’re checking the flagship GT variant, with the petrol engine option. It’s one of just two variants offered in Australia for the 2021 model. And both wear the GT badge. This example pairs a six-speed auto with a 121kW/240Nm 1.6-litre turbo-petrol four-cylinder, while the diesel comprises of an eight-speed auto and 133kW/400Nm 2.0-litre turbo.

You do have to pay for the privilege of more power and all of that torque in the diesel. Prices start at a reasonable $51,990 for the petrol, which is quite attractive for a top-of-the-range SUV in this mid-size SUV class. But the diesel kicks off from $59,990. Even though the 5008 does offer seating for seven, unlike many of the key rivals such as the Mazda CX-5 and Toyota RAV4, we think $60k is a bit much for this class. (Prices exclude on-road costs.) 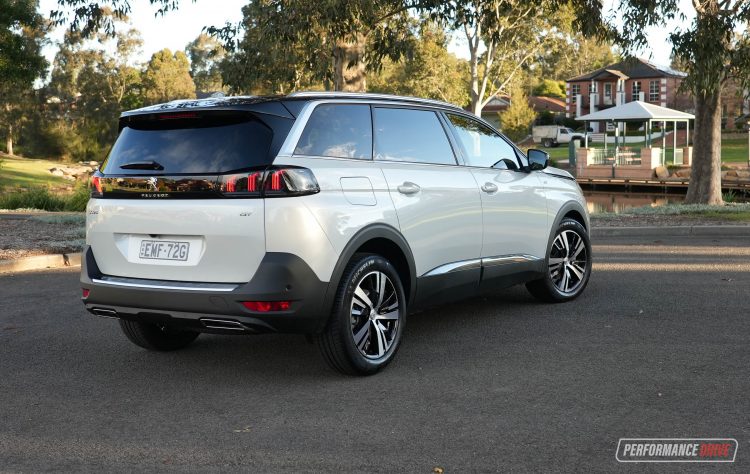 On first impressions, we love the attention to detail in the exterior design. It is properly stunning when you take a close look. The headlights and taillights, in particular, really stand out in this market segment. The latest model also features Peugeot’s new claw-style lighting theme, with classy brushed metallic trimmings, along with a fashionable black roof and blacked-out window surrounds.

While the exterior is very stylish for what it is, the interior simply blows you away. Considering this is not a premium SUV, the quality of design in here is outstanding in our opinion. You’ve got latin wood veneers across the dash and door cards, beautifully sculpted switchgear across the centre stack, and blue ambient lighting that really sets the mood at nighttime. 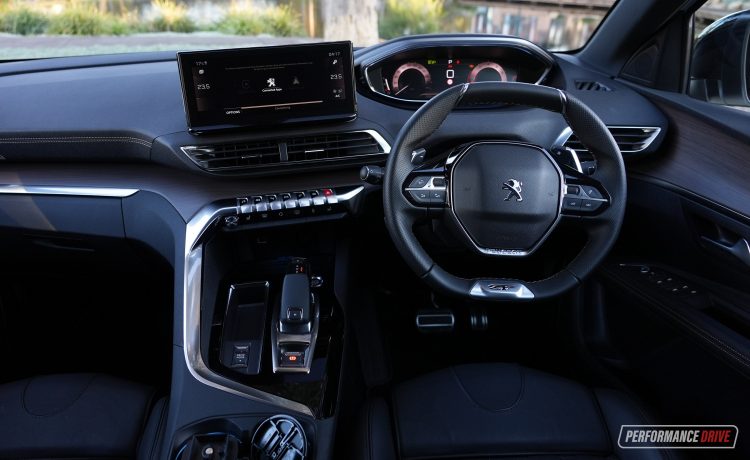 As standard the new 5008 comes with a 10-inch touch-screen packed with Android Auto and Apple CarPlay, digital radio, and a surround-view parking camera system, while the driver views Peugeot’s “i-Cockpit” digital gauge cluster. The cluster is mounted right up high, so it’s almost like a head-up display. We’re not a fan, as the steering wheel completely blocks the view of the screen (including speedo) in our seating position. The tiny steering wheel doesn’t feel right in a car like this either.

Passenger space is good in the front, and the seats are wrapped in classy stitch patterns for that chic, Euro effect. You can option for higher-quality Nappa leather, and it includes a soothing massage function for the driver’s seat. Although it is a $3590 option, we’d recommend you tick it if you can, as the massage service can be just what the doctor ordered after a busy day. 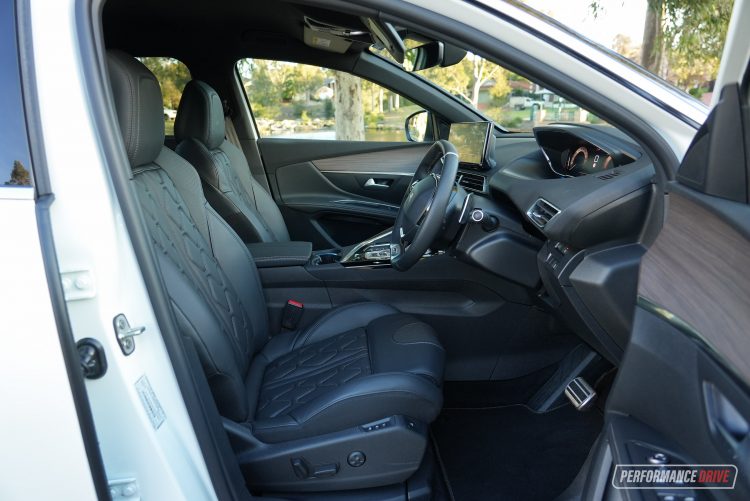 Legroom is especially impressive in the second row. There’s even fold-down tray tables, multiple charging ports, and climate vents. All three seats are fully adjustable too, with recline and slide functioning. Pair that with a completely flat floor and it’s almost as versatile as an MPV.

The third row is very tight and best left to kids. Legroom is restricted due to an inconveniently-positioned step in the floor, while headroom is okay. However, it is a point of difference over the common rivals in this class having these seats available in the first place. And again, you can move the second row about to best allocate space where it’s needed most. 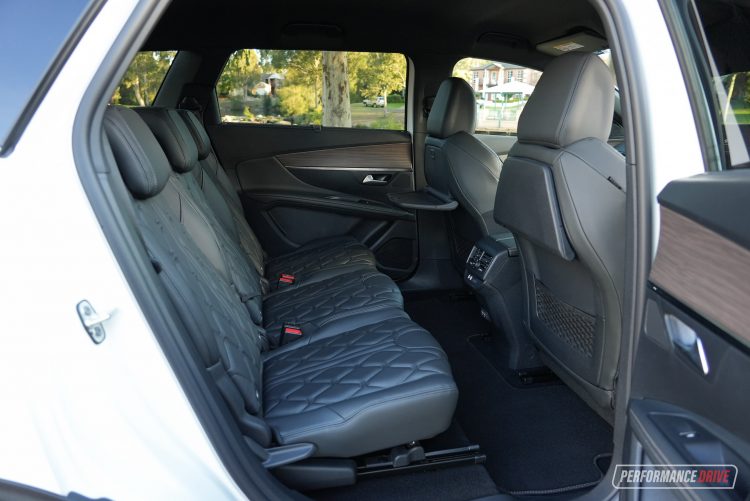 Boot capacity has most competitors shaking in their boots. You get 591L in the five-seat layout, or 1670L with the second and third row folded down. Compared with the most popular rivals, the top-spec Mazda CX-5 GT (AWD) offers 442L/1342L, and the Toyota RAV4 Edge (AWD) presents 542L/1690L. Although, with so many seats here, you aren’t really left with a completely flat loading surface when they are folded down. 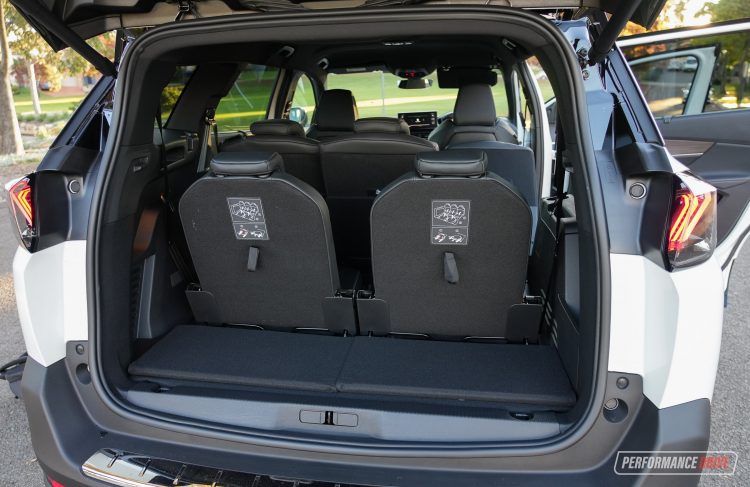 Powering the GT petrol is a 1.6-litre turbo. With 121kW and 240Nm, it’s obviously not going to set any speed records. But we did manage to improve on Peugeot’s official 0-100km/h claim of 10.5 seconds, clocking a time of 9.68. Going for the diesel option might be the better choice, as it delivers a more useable 400Nm, and features an eight-speed auto over this six-speed unit. We tested 0-100km/h in 8.99 seconds in the pre-facelifted diesel in 2018.

With an official average fuel consumption of 7.0L/100km, and a 56-litre fuel tank, the theoretical average range is 800km. That’s not too bad for a mid-size SUV. However, if you opt for the diesel, its 5.0L/100km consumption rate and same size tank equates to an average distance of 1120km. In other words, if you do a lot of travelling or you’re planning some road trips, the diesel is probably more suitable for you. 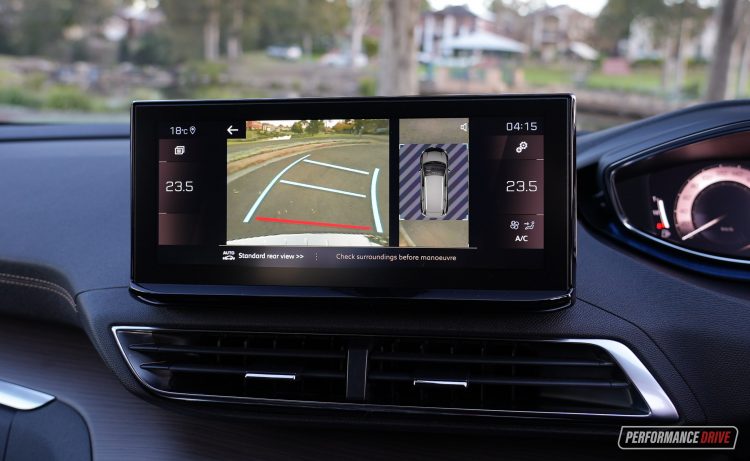 On the other hand if you do spend a lot of time in the city or suburbs, the petrol could be a better fit. In recent years, with a wave of new emissions-fighting technologies coming in, there is evidence to suggest repeated short trips can be damaging for diesel engines. Especially if the engine isn’t able to get up to normal operating temperature. This is mainly due to how emissions systems operate, requiring fully warmed-up engine temps to work properly. If the engine never warms right up before you turn it off again, the gear can run into trouble.

As a family-hauler, the 5008 is very easy to drive and thread through town. That tiny steering wheel helps to make it feel more nimble and sporty. Overall, it enjoys pottering about and getting on with the daily errands. This turbo engine is quiet and refined too, measuring just 77dB under full acceleration during our tests. This is much lower than many of the rival petrol engines.

Being a French car, the ride comfort is excellent. There’s plenty of suspension travel to soak up broken roads and speed bumps, and there’s a very competitive 236mm of ground clearance – though, it doesn’t look that tall. Being front-wheel drive only, there isn’t much hope for off-road capability. The clearance does provide an ambitious stance though and you can clamber over surprisingly chunky and uneven ground. 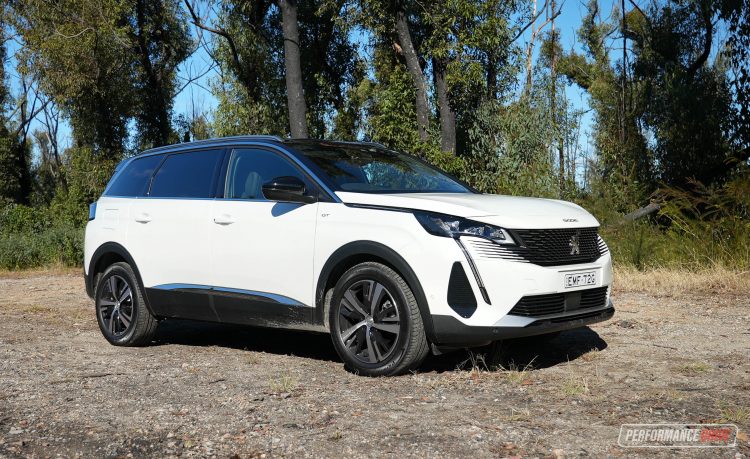 Peugeot needs to stop with the tiny steering wheel and high-mounted gauge cluster, as these do ruin the ergonomics in our opinion. The lack of an all-wheel drive option could turn away some potential buyers as well.

However, we admire the way Peugeot walks a different path to the common, follow-the-leader rivals in this space. The design, inside and out, is truly stunning, and the interior almost offers the practicality and versatility of an MPV. These turbo engines are also commendably efficient and refined in comparison to some. It’s a package worth checking out, especially if you want something that’s a bit unique and you appreciate Euro flair.