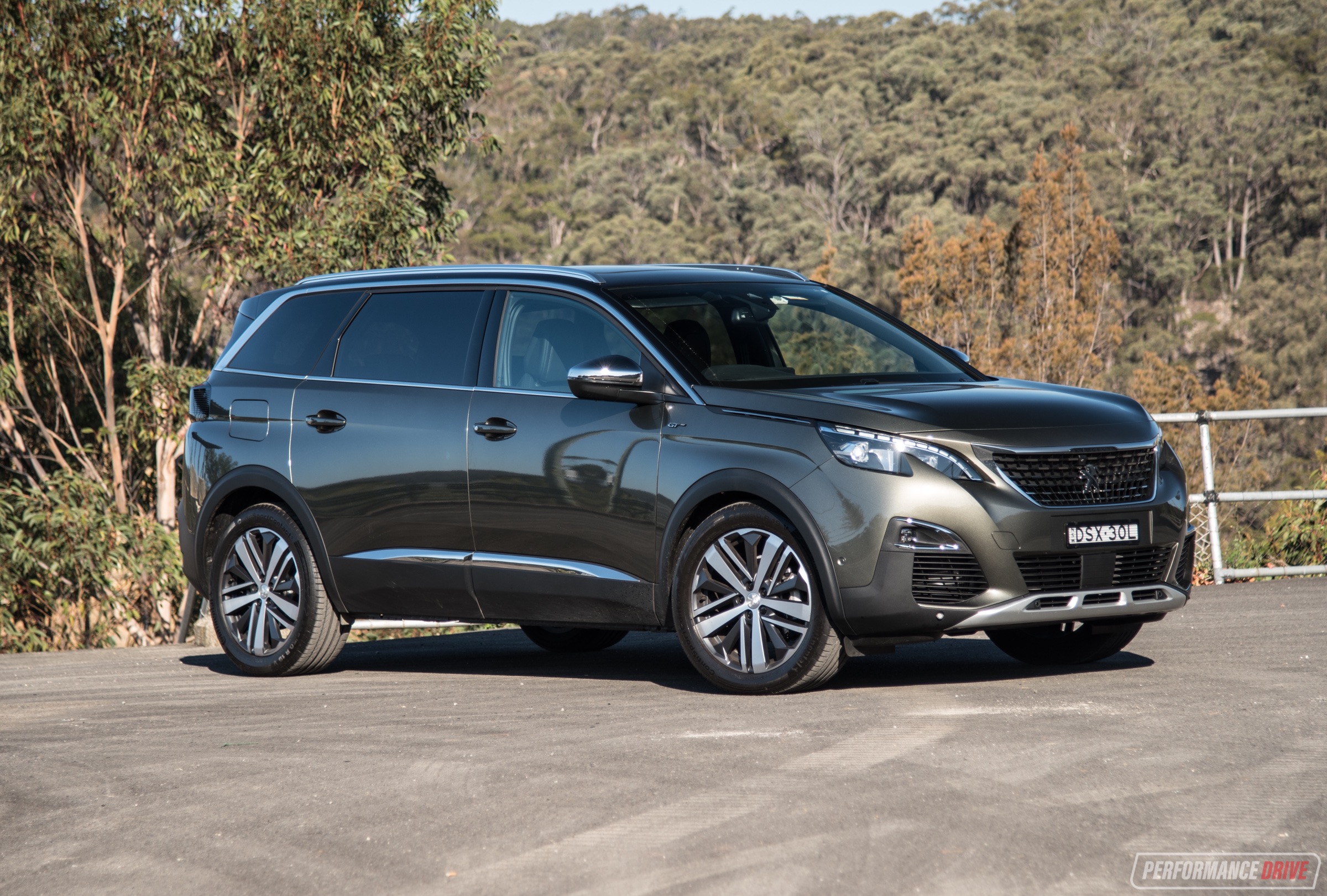 Peugeot is spearheading its stake in the SUV market with the introduction of the new 2018 Peugeot 5008. It joins the recently updated smaller 3008 soft-roader, and the baby Pug, the 2008. The 5008 will appeal to drivers with large families, and those who are looking for something a little more adventurous and attractive than a traditional people-mover. 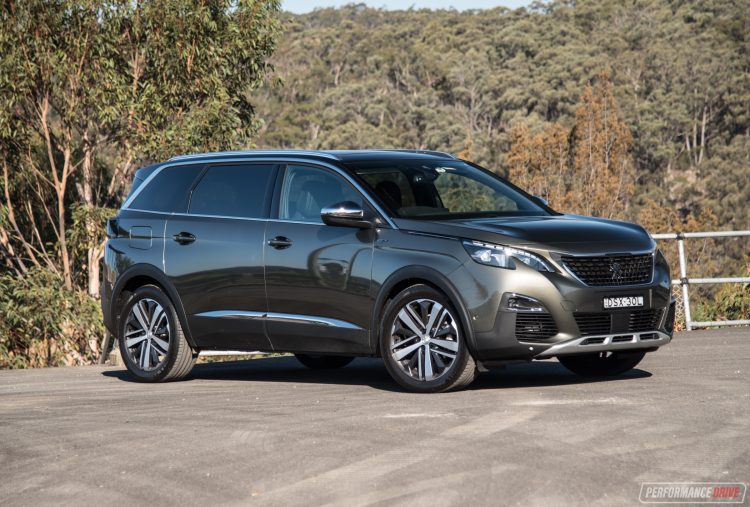 Once again, Peugeot has decided to omit the offering of 4×4 – like with the new 3008 – which shows the 5008 is essentially a people-mover with a bit more ground clearance than your average MPV. And this is not a bad thing. You get the seating you need, at an easy-access height, all the while not wasting fuel on driving all four wheels like in a more conventional 7-seat SUV.

The lineup for Australia is limited to just three variants. The entry Allure, the mid-level GT-Line, and the flagship GT. All come in front-wheel drive with a six-speed auto. These are split up by two engines; a 1.6-litre turbo-petrol four-cylinder that produces 121kW and 240Nm, and a 2.0-litre turbo-diesel engine that produces 133kW and 400Nm. Both engines are seen in the smaller 3008 sibling. Allure and GT-Line come with the petrol, and the GT comes with the diesel. 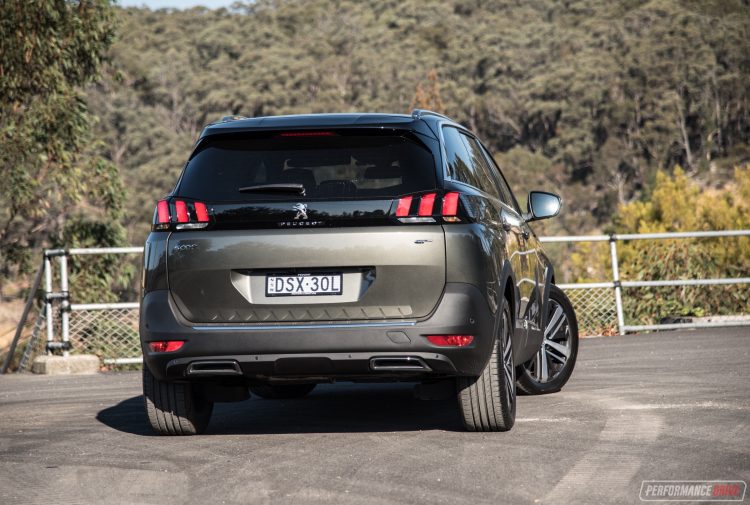 This Peugeot is French-built from the ground up. The design steals cues from other current models, which helps to concrete Peugeot with a familiar look. We love the distinct taillights that light up from the mysteriously dark fascia, and the body conveys a sleek stance, with a flare of shapes and angles flowing from front to rear.

The interior continues with a similarly stylish theme, except there seems to be more acute shapes that angle towards the passengers. Highlights are the attractive fuzzy grey felted trim sections, the brushed metal buttons in the centre of the dash that look like large talons reaching out to you, and the customisable night-time ambient lighting. And you can’t go past the flashy and fully customisable digital instrument cluster. Overall, the interior wins with its contemporary yet groovy character. 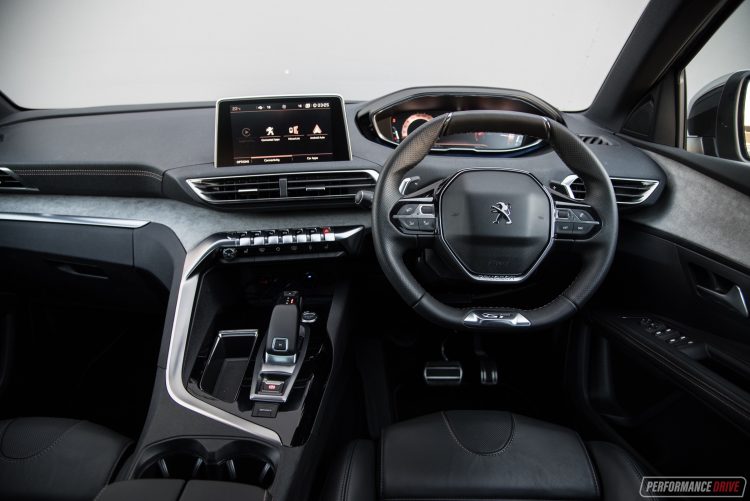 The infotainment touch-screen works well to bring you all the functions quickly and intuitively. It protrudes out of the dash in the same way that Mazda and BMW cars do, which proves to be a bit of a stretch if you’re a taller driver that positions the seat further back. The main screen also controls the air-conditioning variables, which can be a little distracting for first time use if driving. But at least there are hard wired buttons separate to the screen to access the main menus; climate settings, audio, sat-nav etc. 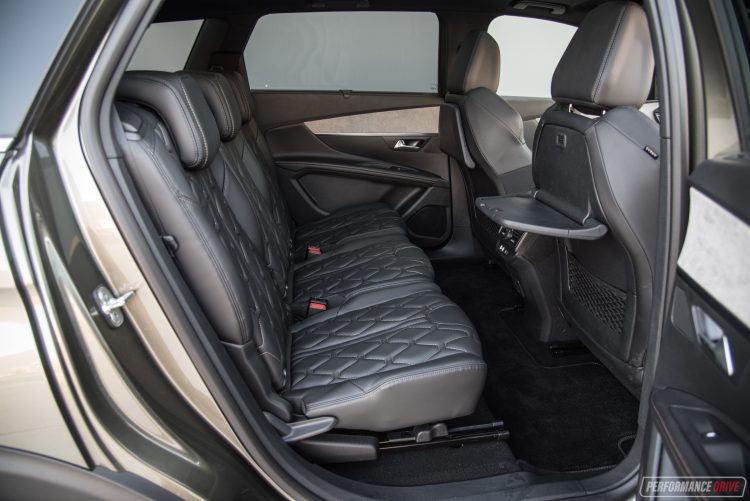 Comfort from the pattern-stitched leather seats is very high. They are moderately bucketed in the front and will compress around your derriere if you’re of a larger physique. In the rear, the legroom is practically endless and comfort is again high thanks to essentially individual seats for all three across. You’ll easily fit five adults with long legs in the second row. And if you have an even bigger family, the third row suffices for short distances. Cleverly, each of the three middle row seats are adjustable, so you can slide all or any of them forward to open up more room in the third row.

Space and practicality is where the 5008 outshines most in the class. It’s just so practical and well thought out, that it’s obvious Peugeot engineers consulted with actual families to devise the layout. There are loads of storage solutions throughout the cabin, including a giant centre console bin and big door pockets. One gripe we have, though, is the miniature glove box. It’s a family SUV and we’ve seen bigger glove boxes in tiny city hatchbacks.

If you go by the official measurements, boot space is class-leading. Measuring in at 780 litres, or 1940L with the second and third row folded (and they fold flat), technically makes it one of the biggest boots in the class. In the real world though it seems brands like to measure their boots differently, as some rivals do present more usable space in our opinion. Even so, we love the way the third row folds away completely concealed within the boot floor, and we like the neat little storage bin in the side and the cup holders for the third row. 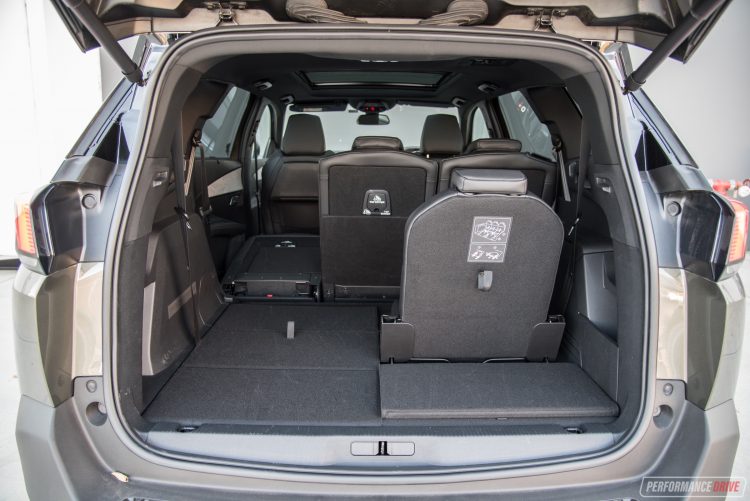 Ordinarily for Australia, European brands don’t offer all engines that might be available closer to their homes. But at least we have the option of a petrol and diesel with the 5008. And the diesel engine in the GT is probably one of the best on offer from Peugeot back in France anyway. It’s not exactly a powerhouse, but it proves to be a capable one for everyday use. 133kW peaks quite high in the rev range for a diesel engine, at 3750rpm. But a handy 400Nm of torque more than gets the job done. And it helps the 5008 is quite light for an SUV (1575kg). Official figures claim 0-100km/h at a moderately sluggish 10.2 seconds, but our testing using a Vbox revealed a respectable 8.99 seconds.

The six-speed auto has some delays in initial acceleration, in terms of the time the pedal is pushed and the actual reaction. But it’s not as noticeable as it is in the 3008 featuring the petrol engine combo. It seems the transmission is better calibrated to the torque of the diesel. With all of that 400Nm available from just 2000rpm, it means it has no struggle building speed from high gears, even at low revs.

Regarding the driving dynamics, the Peugeot 5008 is based on PSA’s latest EMP2 platform, shared with the likes of the Citroen C5 Aircross and the new 3008. It undertakes corners with minimal body roll, with plenty of confident energy during initial turn-in making it feel more animated and exciting than many rivals. You receive adequate feedback through the tiny steering wheel, resulting in a surprisingly fun driving experience. 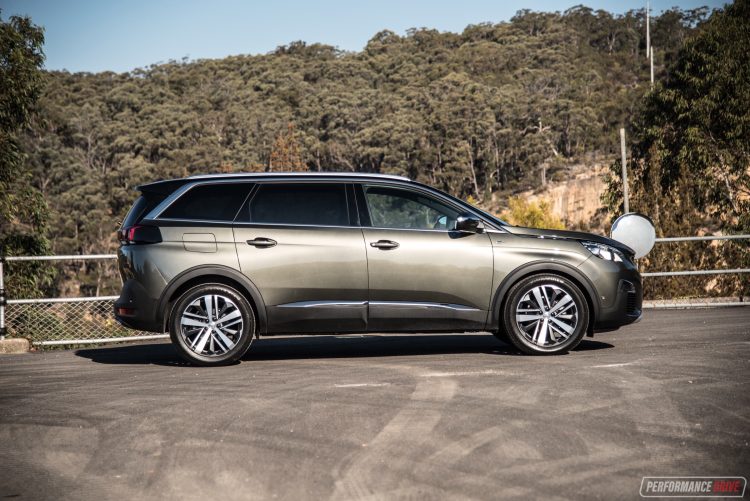 That small steering wheel makes every day driving light and less tiring in the city than its counterparts, too. However, we noticed that it can be tiresome to keep the vehicle in the centre of the lane during highway driving due this almost touchy steering/steering wheel combination. It seems to wander left and right, like you’re constantly performing a balancing act. This is mainly on the open road highways.

Those European dynamics do not seem to compromise ride quality one bit. Bumps and ditches are well absorbed on rough country roads. And that’s about as rough a terrain you’d want to take this Pug. There is no option for all-wheel-drive; only an optional extra to add selectable driving modes. But how useful would they be, given that you’re only driven by the front wheels? That’s why the 5008 should be regarded as a soft-roader at most, or a modern and more fashionable interpretation of its predecessor, which is an MPV.

During our testing, the overall average fuel consumption was displayed at 6.5L/100km. It’s official rating of 4.8L/100km makes the 5008 diesel one of the most economical larger soft-roaders in this class. However, there is a small catch; the engine requires AdBlue. This is an additive that needs topping up with your diesel fuel about every 10,000km to 15,000km. And not all service stations sell it.

Peugeot as a brand has not had the greatest reputation for long-term reliability, running costs, and re-sale value. Like other models in recent years, the 5008 certainly presents itself as a change in the right direction. And to help lure new customers in while reassuring loyal buyers, Peugeot Australia offers an impressive five-year/unlimited kilometre warranty. As a bonus, servicing is only required every 20,000km, or 12 months, whichever comes first. 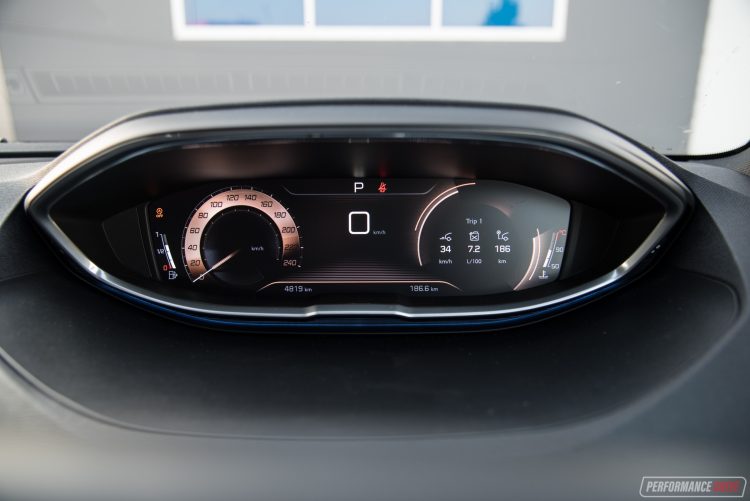 Our week with the 5008 GT BlueHDi has shown us that Peugeot can lead the way in various areas in this medium SUV segment. The GT is loaded with technology and safety, with plenty of space and practicality for larger families, with a handful of clever innovations thrown in. There are only two other models in this SUV class that offer seven seats; the Nissan X-Trail (not available in flagship Ti trim) and the Mitsubishi Outlander. Both of these fall short of the 5008’s overall interior capacity and comfort. So although slightly smaller, its closest competitors in our view are the Kia Sorento GT-Line diesel and the Toyota Kluger Grande FWD – the 5008 GT is about is $6k cheaper and $13k cheaper, respectively.

For buyers who want to go off road regularly, there are more suitable options out there. If you like the thought of packing the car for a weekend adventure that might involve a light dirt road though, the new 5008 should be taken very seriously. We adore the refreshing design for this demanding segment, inside and out, and the family-focused appointments and functions, as well as the strong diesel engine and fun-yet-comfortable Euro handling character. There are a few minor niggles, but many of these may well be resolved by simply getting used to the vehicle.