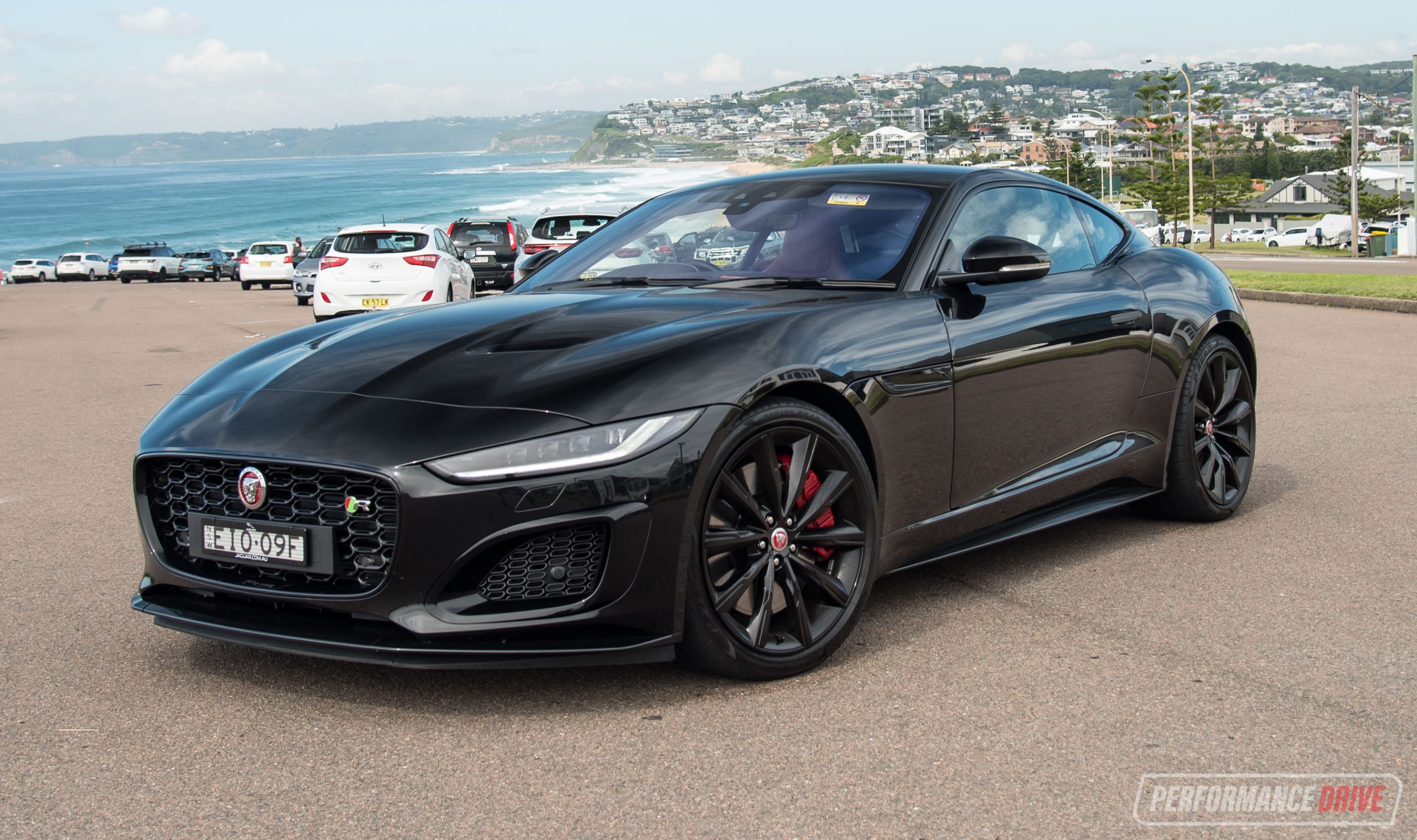 It is undoubtably one of the sexiest sports cars on the market, the Jaguar F-Type. And now it has been given a refresh for 2021, adding improved technology, slender front end design, revised chassis and reduced overall weight, and, most importantly (for us driving geeks) more power. 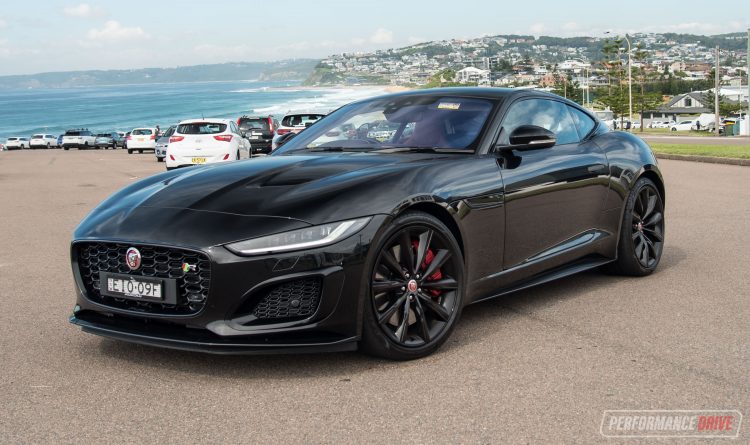 The F-Type was originally created as a spiritual successor to the classic E-Type. However, it arrived in 2013 which means, up until this point, it was starting to fall behind the times. Nobody ever complained about the exterior design, but some of the in-car features and technology left something to be desired.

With this new version though most of those potential concerns have been addressed. Prices have climbed as part of the updated model, with the new R commanding $262,936, up just over $10,000 over the equivalent previous version. 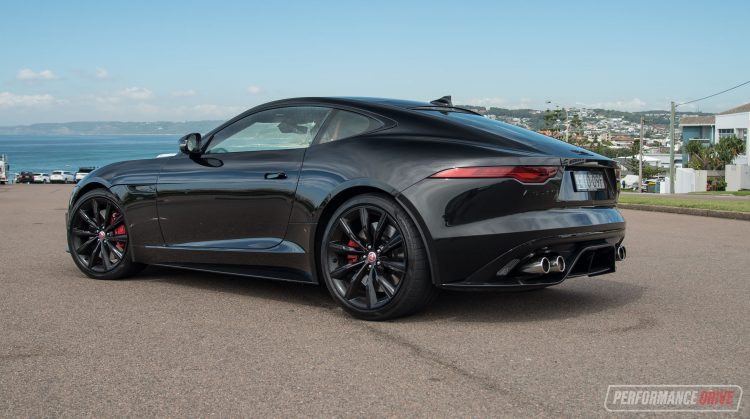 Various changes have been introduced for the interior, but mainly in terms of technology. For instance, the new 10-inch media interface now runs Jaguar Land Rover’s Touch Pro operating system, while the previous mechanical dials within the instrument cluster have been replaced by one 12.3-inch TFT display. Both screens present sharp graphics and an attractive colour palette, especially the gauge cluster.

Touch Pro is simply the latest layout for the in-built apps, and you can swipe across from page to page for the different menus. Functionality and user-friendliness is hugely improved over previous systems fitted to the F-Type, and Android Auto and Apple CarPlay are standard. 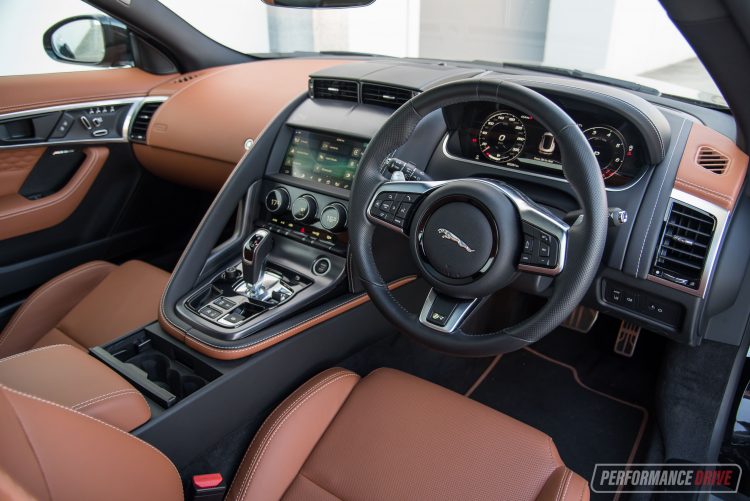 Although the climate control switchgear carries over from before, we quite like the three main controls and their little digital screens. Being a sports car the cabin is pretty tight, but a pair of cup holders and a centre console box provide some practicality. A rear-view camera is standard, although, it would be good if Jaguar offered a surround-view system – preferably as standard for this pricey top-price R. Strangely though it’s not even an option.

The seating position is very hunkered down which certainly amplifies the overall excitement of the car, with an excellent driving position and plenty of seat and steering column adjustment available. Parking in tight spots can be tricky as a result of the low stance, as it can be challenging to judge the exact length of that long bonnet. 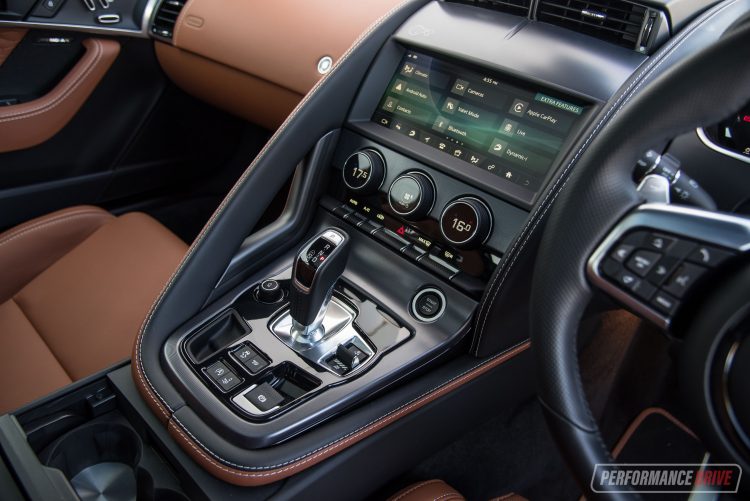 Rearward visibility is acceptable through the rear windscreen (for a sports coupe), but again, the enlarged panels over the rear wheels mean it can take a moment to align the car parallel. The rear track is also 26mm wider than the front. That’s a more exaggerated front-rear ratio than even the Porsche 911 Turbo S (17mm wider at the back).

Boot space is pretty poor to be honest, especially with the spare wheel option in place. In saying that, the boot can accommodate a weekend away… so long as you’re prepared to go without luggage cases and instead just shove your clothes and belongings into the corners of the boot. In all seriousness though, it is rather small in comparison to the external perceptions. 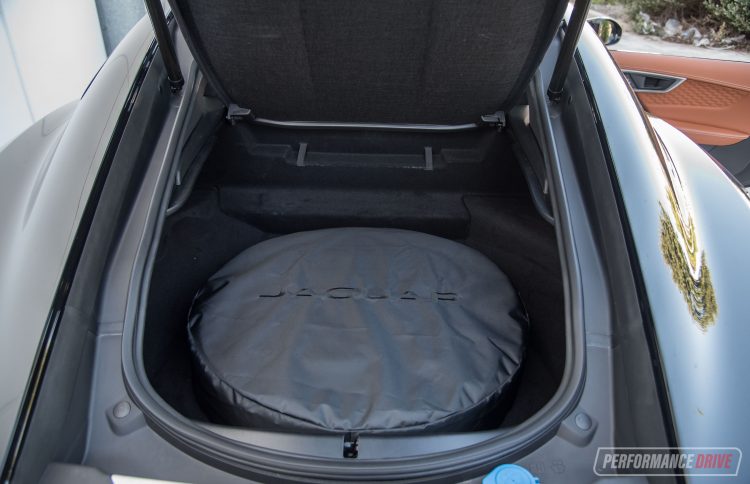 Jaguar could have gone all eco and installed its new 3.0-litre turbo-petrol inline six in here, with mild-hybrid tech. But, thankfully, it has retained the gargling and crackling 5.0-litre supercharged unit from the predecessor. It is a perfectly fitting engine for this stunning piece of design we reckon. It’s also one of the most responsive engines on the market. You only need to breathe on the accelerator pedal to get a hint of the enormous performance that’s waiting to pounce.

It is a tad disappointing the R with the V8 is no longer available with rear-wheel drive. However, frankly, trying to get 405kW down to the ground in the previous F-Type R RWD was a challenge. Now with the 423kW tune as seen in the previous F-Type SVR, taking off without leaving a giant cloud of tyre smoke would have been difficult. And if you enjoy the excitement of a playful tail or a spot of drifting on the track, the RWD P380 3.0-litre supercharged V6 will more than suffice. 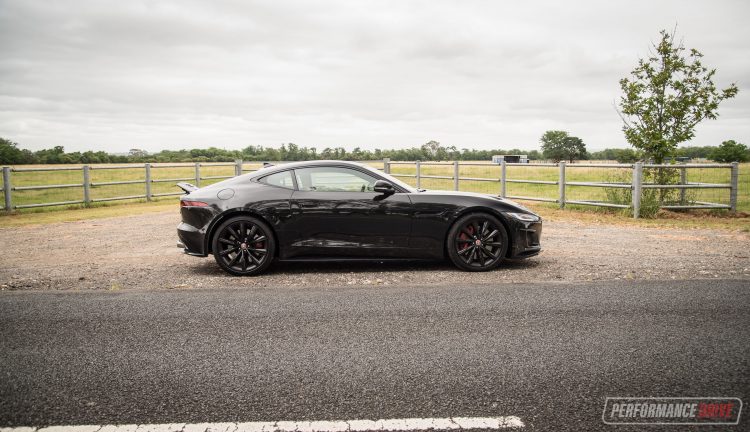 In all other circumstances the R with AWD is the more complete and competent all-rounder. Although the F-Type is characterised as a sports car, the R also provides grand touring qualities. All-wheel drive grip means it’ll demolish a slippery mountain pass, and even cope in mild snowy conditions. If it retained rear-drive such versatility just would not have been possible. You could also argue that the F-Type’s key rival is the Porsche 911. And at the top of its range, the 911 Turbo also features all-wheel drive.

There is no hesitation or any hint of wheelspin whatsoever getting off the line. This AWD system hooks up brilliantly, even with traction control off. Jaguar claims 0-100km/h takes just 3.7 seconds, and we clocked a best of 3.81 seconds (during pretty warm conditions). We also clocked 0-200km/h in just 12.25 seconds, and the 1/4 mile in a shade under 11.90 seconds at 197km/h. This is a seriously quick machine, make no mistake. So it’s great that it’s not all show (and sound) without the go to back it up. 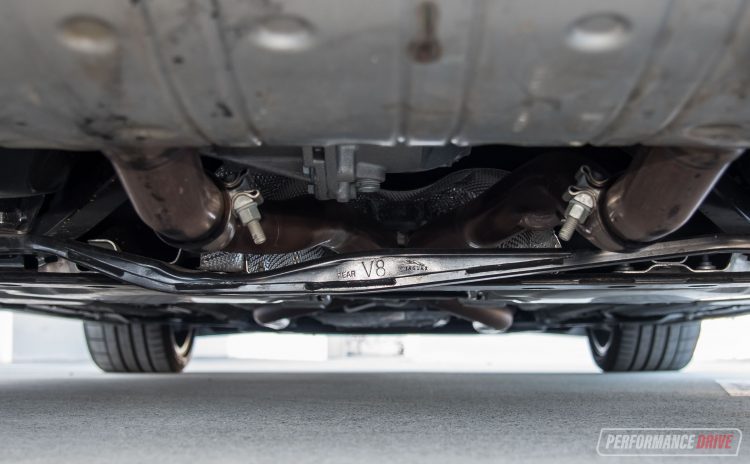 Jaguar has cut a lot of weight for the new model. In fact, according to the specs, this example has a tare weight of 1705kg compared with a hefty 1847kg (tare) in the equivalent previous AWD R model. It doesn’t necessarily feel light and snappy on the road. Instead, there is a definite planted and solid demeanour conveyed through the steering wheel. In a good way, because it means there is no nervousness behind the wheel.

The weight is somewhat detrimental when it comes to quicker switchback corners and when you need to change directions rapidly. In the standard Comfort driving mode we experienced some catchup characteristics with the chassis. For example, dipping hard into a tight righthand turn and then transitioning to a left bend of similar sharpness, there seems to be a tiny albeit noticeable moment of delayed weight shift. Like a wobbly aftershock. It’s only very small but it can put you off slightly when pushing hard. 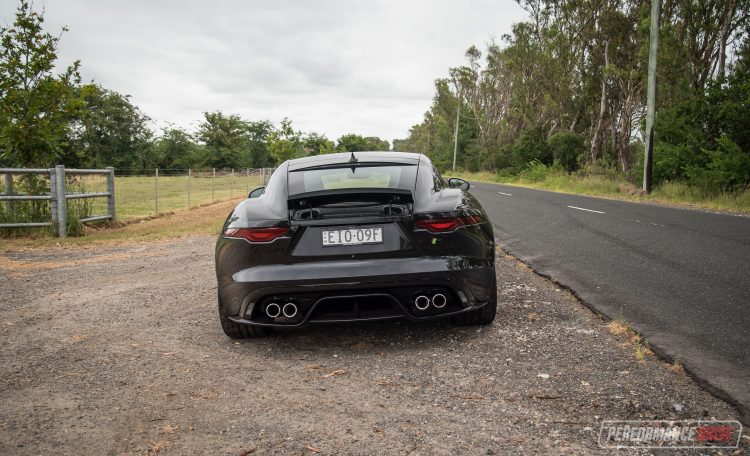 Fortunately, to remove this you only need to flick it into Dynamic mode. Doing this firms up the suspension and completely eradicates any unfavourable weight transition characteristics. You can point the nose in fast by dialling the direct and responsive steering, and the outfit (all of it) will follow your command instantly. It is a superb-handling sports car. And AWD grip means you can lean on the power quite early if you want to.

Speaking of different modes, ride quality in the Comfort mode is really quite good. You might not expect it, given the performance and the gob-smacking design, but bumps on country roads and whatnot rarely disturb the peace in the cabin. It happily cruises along. Jaguar says it has introduced new springs and dampers with the new model, along with stiffer rear knuckles for improved response. Yes, other Jaguars are softer and more relaxing to drive. But for a very serious sports car like this, we think the level of suspension travel and its ability to soak up reasonably deep surface imperfections is commendable.

As for fuel economy, if you’re wondering, this 423kW engine is now rated at 11.3L/100km. That’s exactly the same as the old 405kW AWD R variant. We’re guessing the weight loss program has helped in this department. During our week we averaged 12.4L/100km. In our opinion, that isn’t too bad for the level of performance. The engine is surprisingly power-efficient too, with a ratio of 37.43kW:L/100km (calculated by dividing the power by the official average consumption). 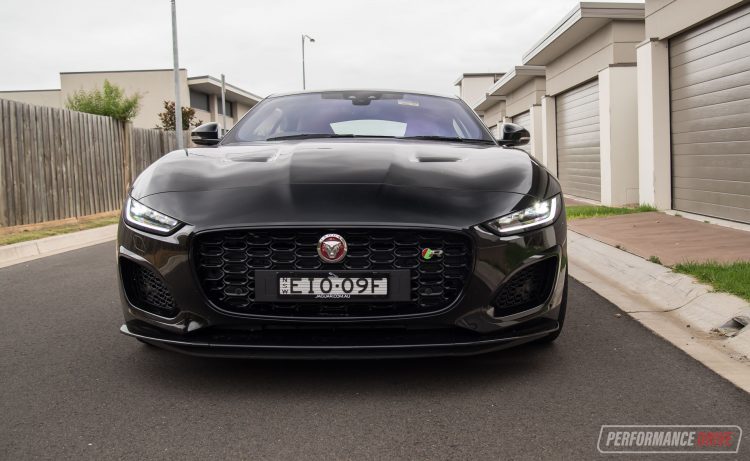 We feel like the F-Type R is a cross between a cold-blooded predator and a giant but friendly bear. The power and torque is massive, and the speed it can provide is breathtaking. Yet, with AWD and a very attractive design, it isn’t intimidating or frightening. The chassis can easily manage the power, and most driver skill levels will be able to enjoy a decent range of the car’s overall potential.

In terms of the updates, specifically. We’re not sure the interior has had enough done to it for a car that probably needs to last into 2023 or beyond. The digital screens are fresh, but the rest is pretty much the same as before. Some of the controls and switchgear seem a bit 2015, and the fact that many physical controls still exist at all is some evidence of its age; the current trend is to do without as many buttons as possible for a cleaner look.

Overall though we are so glad cars like this still remain on the market. It is drop-dead gorgeous to look at. Really inspiring stuff. And it has the muscle under the bonnet to back it up. Most importantly of all, it is outrageously fun to drive.