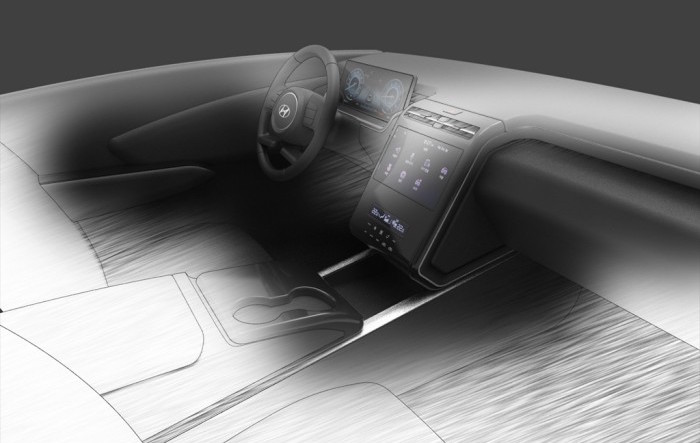 What appears to be an official sketch showing the interior of the 2021 Hyundai Tucson – codenamed NX4 – has surfaced online, giving us a pretty good idea of what the new cabin will entail. It looks like Hyundai wants to really amp up the technology and modern design for the popular SUV.

The sketch shows a smart and sophisticated cabin layout incorporating minimal buttons and controls. Instead, it looks like most functions are packed into the large, almost-square centre touch-screen. It’s mounted flush on a floating fascia, with climate vents neatly integrated along the top.

Below the main media screen is what looks to be another thin digital screen for the climate controls. It’s hard to tell if the buttons below it are physical or blended in with the screen. Either way, the controls appear to be flush with the dash fascia as well for a super-clean and flowing design.

Behind the steering wheel is wide-screen digital instrument cluster. It’s showing twin gauges, likely for the rev counter and speedo, with driving information in the middle. We suspect there will be some degree of adjustment with the display, perhaps with some configurable layouts that drivers can choose from.

Also new is a rather intriguing four-spoke steering wheel. We’ve seen a similar design on the 2021 Sonata and the new Genesis G80. Maybe this the the steering wheel theme of the future for Hyundai? It continues to offer some button controls on the two main spokes. 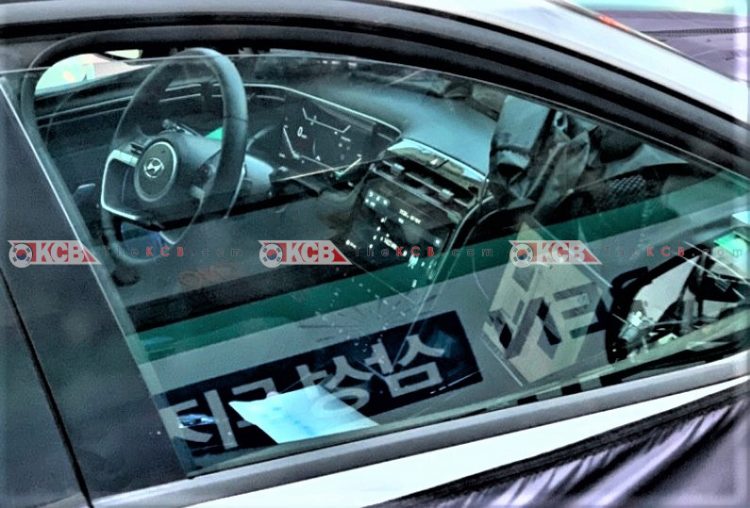 The source of the image isn’t exactly known. Hyundai has not officially sent out any information in this regard. However, judging by spy photos of prototypes seen in Korea, this sketch shares plenty of resemblance. For example the spy photo above, published by Korean Car Blog, shows a similar touch-screen and steering wheel. Only the lower climate control panel looks a bit different but this could be due to different trim levels and so on.

In related news, the Korean website seems to have confirmation that there will be 2021 Hyundai Tucson N-Line. It’ll apparently follow in the footsteps of the upcoming Sonata N-Line and feature the same new 2.5-litre turbo-petrol four-cylinder engine. Power is set to be around the 213kW mark, although the same engine produces up to 224kW in the case of the G80. Either way, this unit could help the new Tucson become the most powerful SUV in its class.