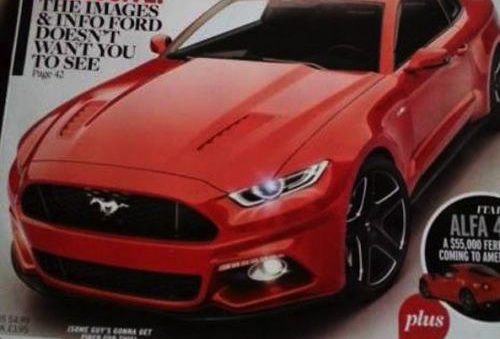 Is this the face of the new 2015 Ford Mustang? The latest issue of Car and Driver magazine in the US features an intriguing image, claiming to showcase what the new model will look like.

It’s hard to tell if the image is simply a digitally generated artistic interpretation. If it is, it’s possible the publication had some inside knowledge or guidance in drawing the image. On the other hand, it does look quite realistic considering Ford’s latest design direction.

The front end incorporates a rounder and thinner grille than the current model, as expected, while the headlights are much thinner and more modern, similar to those seen on the Evos Concept car, again, as expected.

The rest of the iconic coupe appears to be similar to the current model only the wheel arches and panel contours are curvy and do without the various panel lines.

As for engine options, official details are still under tight wraps at the moment. Speculation suggests the new model will be available with a four-cylinder, potentially a 2.4-litre turbo producing around 230kW. Other likely engines include a 4.9-litre V8 with around 320kW and an entry-level 3.8-litre V6 with around 224kW.

The new model is anticipated to be revealed in the very near future. It will, as previously reported, officially go on sale in Australia in the next couple of years.