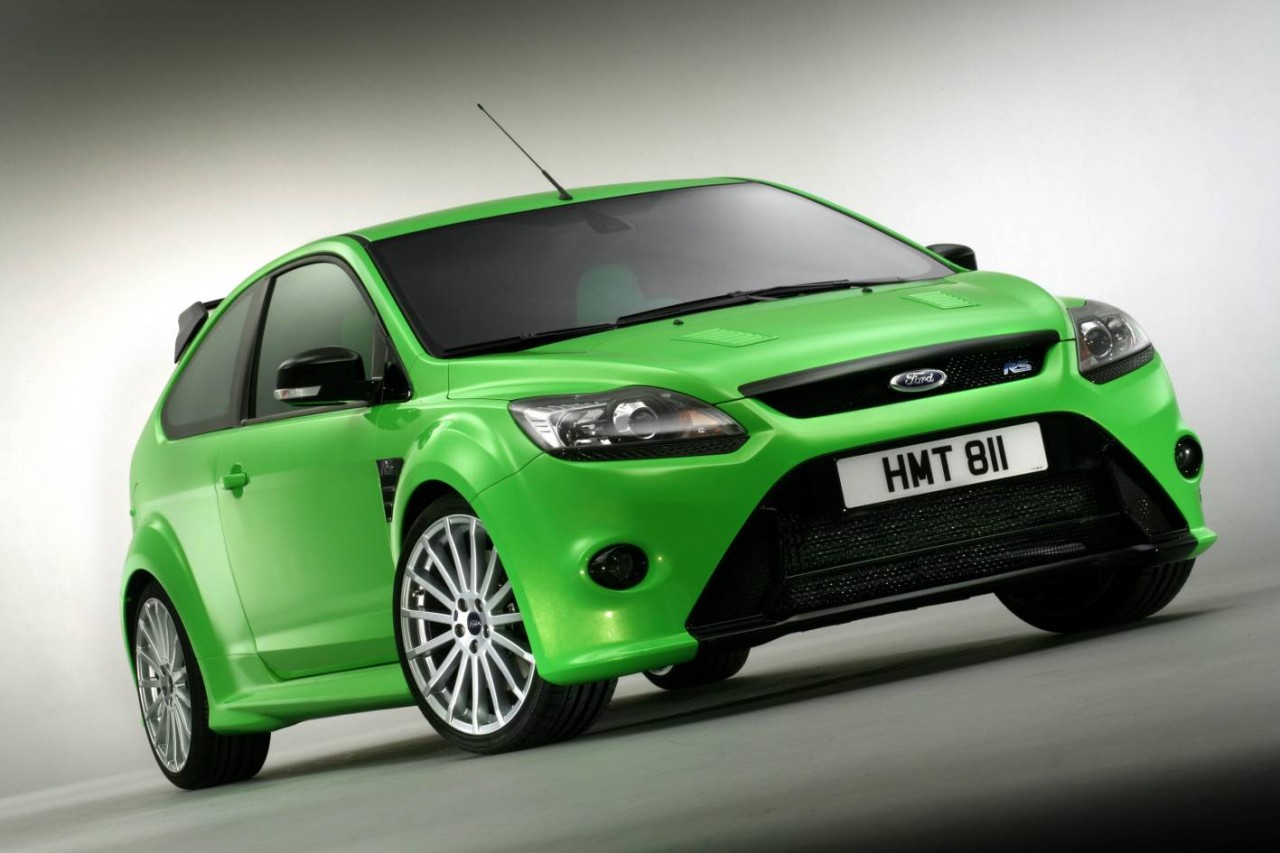 Hot hatches such as the 2010 Ford Focus RS waken the fire within every petrol head. It has rivals such as the Renault Megane Sport Cup 250 and Golf R shaking in their boots. Forget Danny Green, this is the real ‘green machine’. 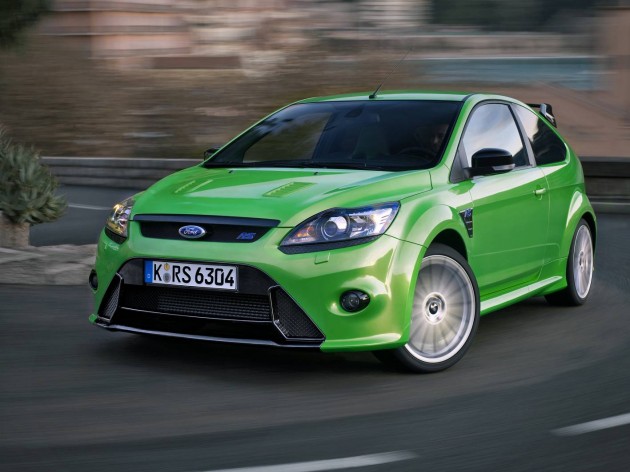 The RS badge has a long history in the Ford stable, Europe in particular. Over the years the RS badge has been the sign of pride, only placed on cars that have that ‘beast’ instinct true petrol heads look for. The 2010 Ford Focus RS is no exception.

While the Ford Focus’ mass purpose is to keep people mobile, Ford doesn’t forget the select few of us who want more than just ‘A to B’. Ever since the Ford Focus reared its head in ’98, it has proven to be quite a sprightly little hatchback. The RS is no exception, with its 2.5-litre turbocharged Volvo-sourced five-cylinder engine, coupled to a six-speed manual transmission, things haven’t been this electrifying since the Ford Escort RS Cosworth.

So, given it’s been three decades since the last RS Ford hit Australian shores, we ask ourselves has it been worth the wait? Sure, there’s been other models us Aussies never got, but like the saying goes, beggars can’t be choosers – Australia quite often misses out on exciting performance cars i.e. Renault Clio V6. 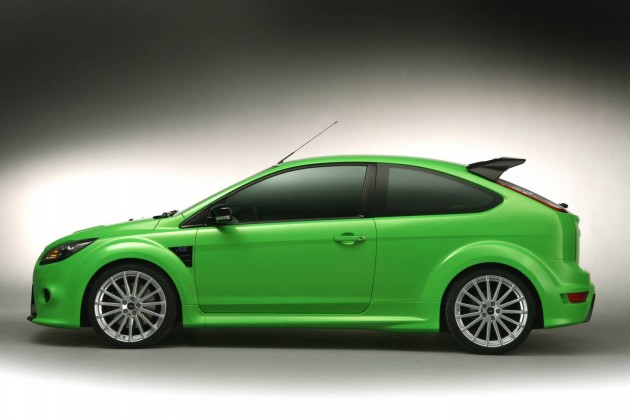 So what’s it like to drive? Initial take off is somewhat tricky to get used to as revs feel doughy down low, but you get used to it. It won’t take you long to become familiar with the six-speed gearbox, it’s a pleasure to use and it provides well-spaced gearing, so there’s always a suitable ratio for the circumstance. However, all this is good and well, right up until you get on the gas. From there on, everything changes and things can get a little nervous.

Ford says the new Revo-Knuckle front suspension and driveline system has conquered torque steer, but because the Focus RS is able to dial up plenty of torque at relatively low revs, it asks upon a huge task for the front wheels to maintain traction and directional stability. When you drive hard and take the engine to its peak torque level (5500rpm), you can feel the wheel wiggle in your hands – very common in powerful front-wheel drives.

Spontaneous mashings of the right pedal are best done with two hands on the wheel, otherwise you might just find yourself swapping lanes. The ‘wiggling’ isn’t enough to scare you, it just adds some extra character to the drive, character that you have to be ready for. And in days of electronic steering racks and other numb-like devices, we reckon a slight tug at the wheel is a good thing. It let’s you know you’re driving the car, not the car driving you. 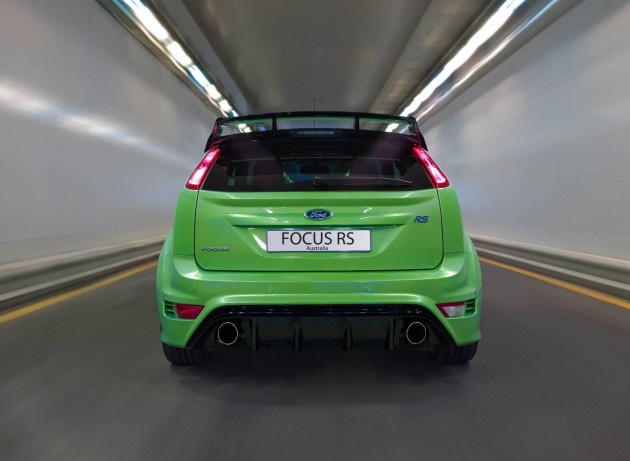 Now, in most front-drive hatches, hit the go pedal hard mid corner and you’ll no doubt push to the outer line of the corner. The Focus’ Revo-Knuckle system however, splits the torque between the front wheels helping you to stay on the apex whilst maintaining acceleration. The differential does this by directing power over to the outside wheel, helping to pivot the front end around the corner.

In our test, not even bumps or pot holes seemed to throw you off the targeted line. What about weight-shifting under sudden power-off during mid corner? Surprisingly, the tail stays well planted, unless you really provoke it with aggressive wheel work. On paper, the combination of 224kW of power in a small front-drive hatch doesn’t sound too secure. But it feels really solid on the road, and quite heavy too. It does weigh 1492kg but it feels chunkier than that, in a good way. A true credit to the Ford engineers.

Where the car can become quite a handful is in wet weather. If the RS were rear-wheel drive, we’d be smiling, but 224kW through the front wheels just doesn’t like slippery surfaces. If you try and drive hard, it’ll just spin, pulling you across lanes and not in the direction you plan on going. It is possible to drive fast in the wet, but you need to focus harder and apply power with more thought. Do this, and you can have a whole load of fun no matter the conditions. 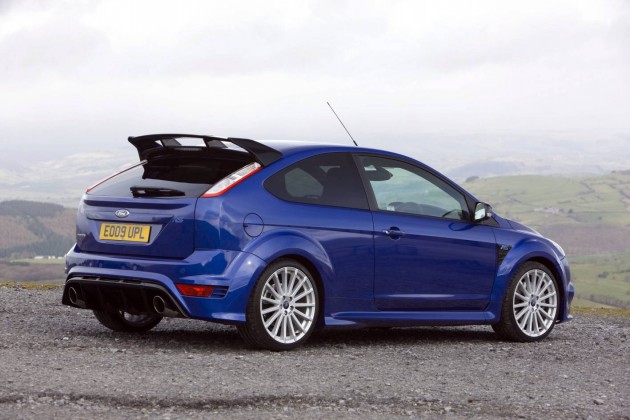 The five-cylinder engine used in the RS is very similar to the one in the XR5 turbo, however, the RS features all new forged internals, a larger-diametre turbo, and revisions to the intake and exhaust manifolds ensure the hero status of the RS badge is kept intact.

Ford prides itself on the fact it only gives the RS badge to something that has that beast instinct we all look for in performance cars. Key areas that are crucial to the RS’s success are the handling. Somehow, even though sometimes it still spins under accelration in low gears, you can still manage to keep things under control – the way it can get the 224kW to the ground via the front hoops at all boggles us. If there was a negative point to car’s handling, it’d be that the ride is very bumpy on rough surfaces, which can be super annoying when you just want use the car for daily duties, and as explained earlier, torque steer can be an problem. Would any of this stop us from buying one? No.

Ford have really gone to town on the styling of the RS. Everything from the huge rear wing, to the massive rear diffuser put this car in supercar territory, in terms of visual attraction. The pumped front and rear wheel arches are filled with 19-inch alloy wheels, taking up almost every bit of space available. Bonnet vents also help everything in the engine compartment keep at its correct running temperature. 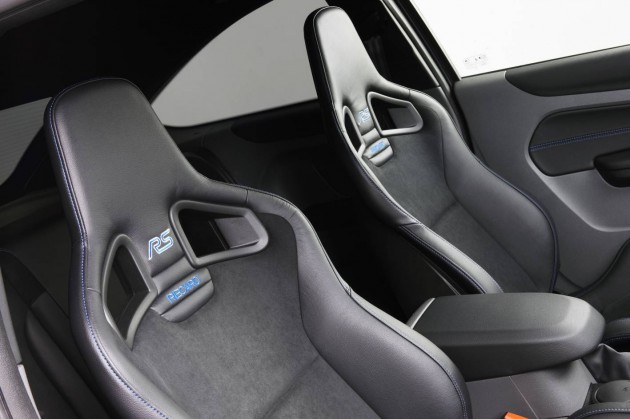 The seats are Recaro, and if you’re interested in performance cars at all, you’ll know the Recaro name means business. They’re super supportive through the twisty stuff and reasonably comfy for long trips. They provide the perfect compromise.

All the regular equipment such as MP3/iPod compatible media player, electronic stability and traction control, are standard. There’s also a dash-mounted boost gauge, and push-button start – which funnily enough has the word ‘power’ written on it – remind you of the extra $30,000 you spent over the regular Focus. Overall build quality of the cabin is good, however, in our test car there were a few tiny rattles that got a tiny bit annoying.

There is a warm safe feeling about the cabin. You almost feel like you’re in a tiny cave as the privacy tint on the rear and side windows is very dark. Not really a big issue. In other areas, the centre of the dash does look a bit ‘90s, and the radio is just awkward to figure out; you’ll need to persist with it for a while to get the hang of it.

The Ford Focus RS asking price of $60,000 will certainly have a few consumers scratching their heads, as it is pricey for a car with a Focus badge. The price also seems a lot for a hot hatch, but if you consider its performance capabilities compared with an STI or Evo X – both of which are fractions of a second away in common acceleration tests – it’s the perfect car if you want something a little different, something a little more exciting than those main rivals. 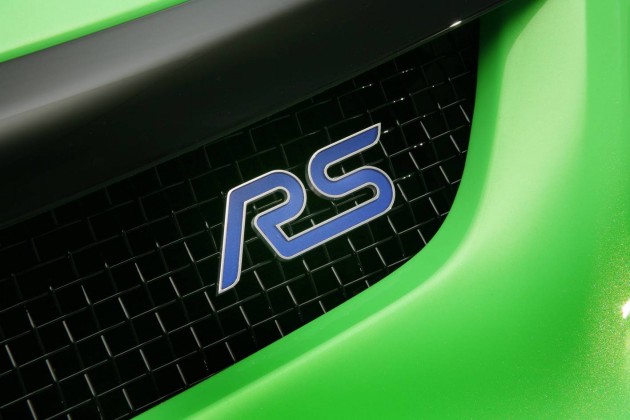 Given there’s only 315 in the Australia, exclusivity is pretty much guaranteed. As previously stated, the last RS to be imported into this country was more than three decades ago. Let’s cross out fingers it’s not another 30 years before we get to see another Ford adorn the RS emblem, because they’re just brilliant.