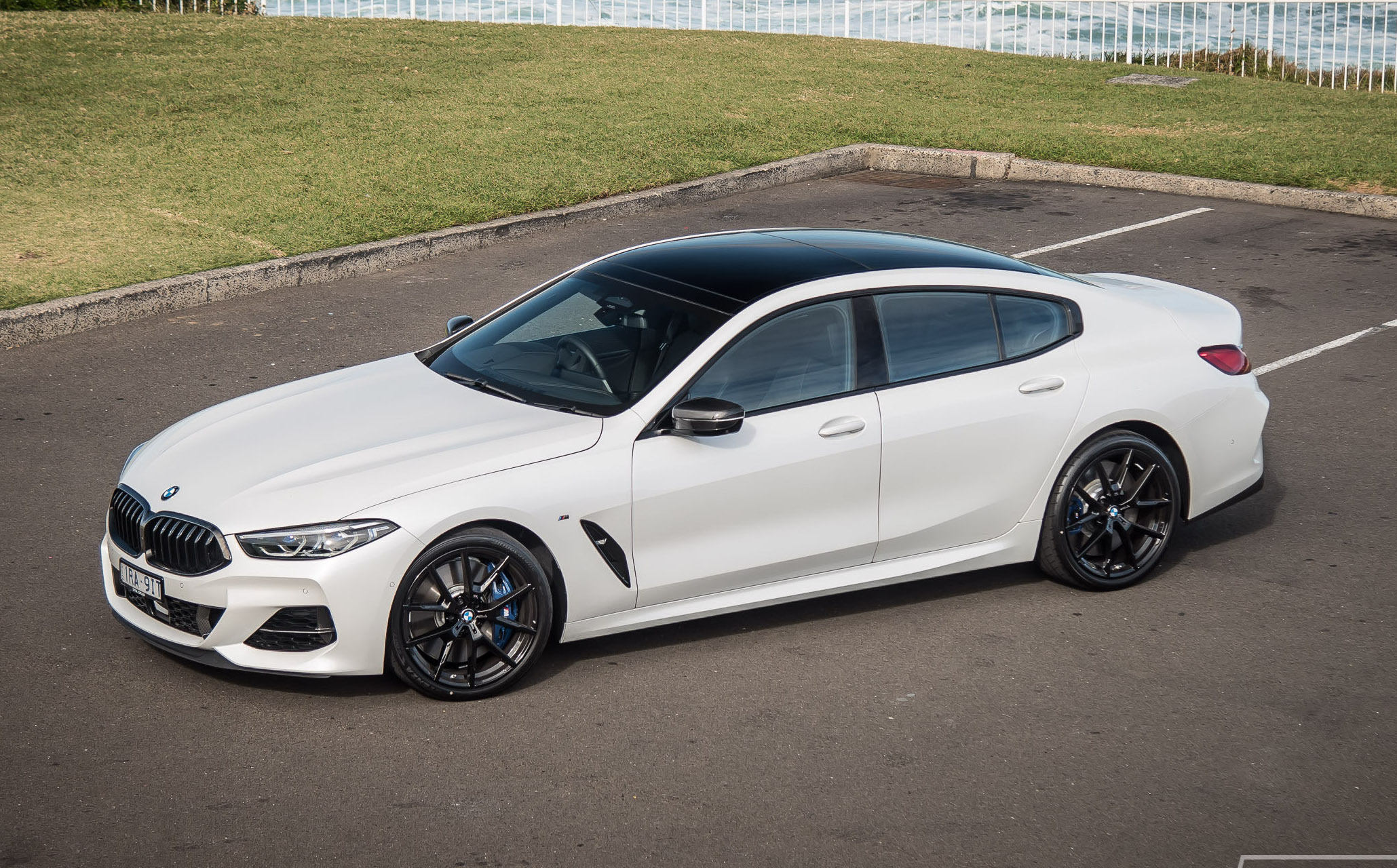 If grand and imposing is what you want, the 2020 BMW M850i Gran Coupe could be just what the doctor ordered. It joins the all-new 8 Series lineup and sits at the top of the tree in BMW’s regular showroom range. 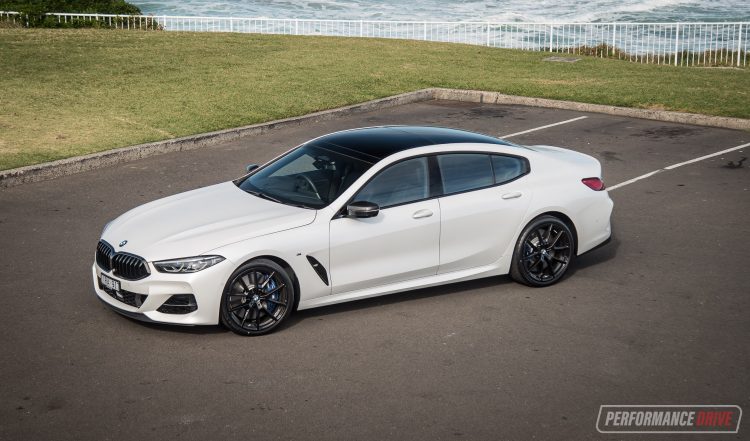 Yes, there’s also the BMW M8 Gran Coupe but that’s a completely different animal. It’s much more focused and serious, and it is developed by BMW M division predominantly on race tracks. The M850i is developed by BMW’s M Performance division, so it’s key philosophy remains luxury and prestige, with a dash of mega speed and power. Buyers can get the M850i in coupe and convertible form as well. 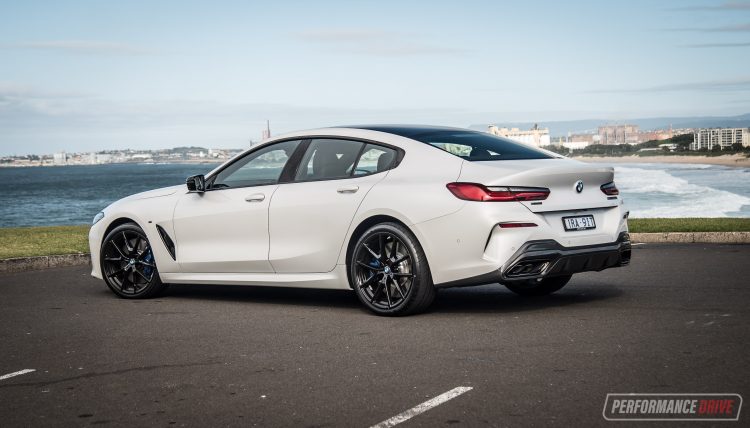 Those who know their BMWs will instantly recognise the 8 Series nameplate as the pinnacle of grand touring luxury from the brand. We haven’t seen the name since the 1990s. But in today’s lineup the 8 Series enters the showroom as the sporty version of the 7 Series – a bit like what the 4 Series is to the 3 Series.

This means it’s always going to have a whiff of sportiness to it. This starts with the CLAR-based platform that’s largely made from aluminium, including the doors and bonnet. Magnesium is used for the cockpit support, and the centre tunnel is constructed from carbon fibre (BMW Carbon Core) to minimise weight and to ensure optimum weight balance. 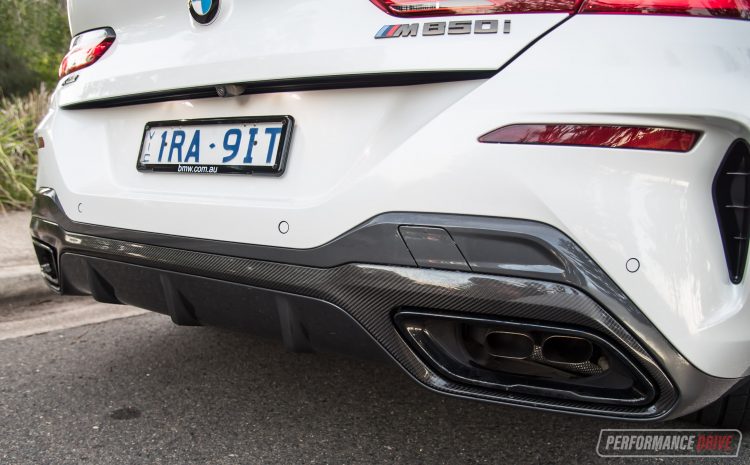 To further spice things up buyers can option for the BMW M Carbon exterior package ($6900), which is what this test car shows off. Carbon fibre is placed discreetly, lining the front air ducts, garnishing the side mirrors, and wrapping around the rear diffuser element. A full carbon fibre roof can also be added as a no-cost alternative to the panoramic glass roof as featured here. BMW does say the carbon roof reduces the M850i’s centre of gravity, but to what degree exactly is unknown.

Speaking of weight, as extensive as BMW’s efforts may have been the Gran Coupe weighs about 100kg more than the two-door coupe; 1846kg vs 1951kg, according to Redbook. But in our opinion that’s a great effort considering the weight of two doors alone would come close to that, let alone with 223mm of added body length (including 201mm in the wheelbase). In fact, the Gran Coupe measures an entitling 5074mm long. You said you wanted grandeur? 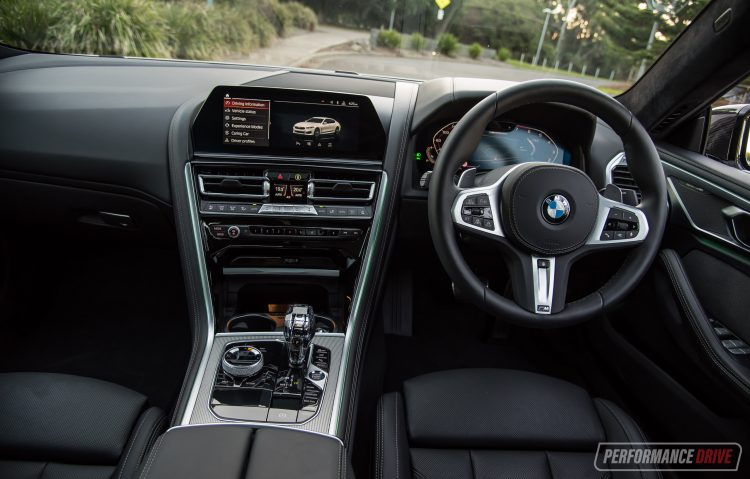 As you’d expect, the interior is sumptuous, sophisticated, and stately in BMW tradition. One of the first things you might notice is the exquisitely sculpted glass for the gear shifter and iDrive controller. It’s a work by CraftedClarity. BMW interiors are usually all business and very little flamboyance. But these glass items are a befitting certification for the 8 Series we think. They help put the nameplate, suitably, on a pedestal.

Most of the controls and technology in here is familiar BMW stuff. Up on the dash is the now-superseded 10.25-inch media screen – a 12.3-inch screen has since rolled out in BMW’s upper-end models, and we suspect it will be introduced for an 8 Series update soon. Even still, it does run BMW’s latest 7.0 operating system and includes Apple CarPlay. There’s also a 16-speaker sound system included, but what you need is the spectacular Bowers & Wilkins 16-speaker optional unit, as fitted here ($8200). It sounds superb. 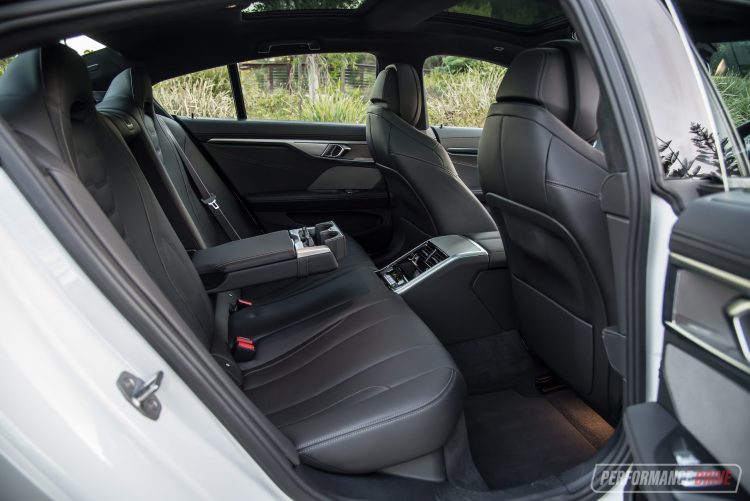 Rear passengers are carted around like royalty. BMW calls it a 4+1 layout as there is a centre seat, but it’s really only suitable as a last resort or for short journeys. This is a four-seater at heart. Although, if you really do need five seats the Gran Coupe is the only option. The two-door coupe and convertible are strict four-seaters. With two somewhat separated outboard seats there is enough room for a proper centre console to run through the middle. It presents individual climate control, twin USB-C charge ports, and some storage.

Storage in the boot is boosted to 440L in the GC over the regular two-door coupe’s 420L. On first impressions the boot actually looks a lot bigger because it stretches in deep, and its completely flat floor provides easy loading. However, the space isn’t all that wide. Don’t worry though your finest luggage set will fit in with no problem. 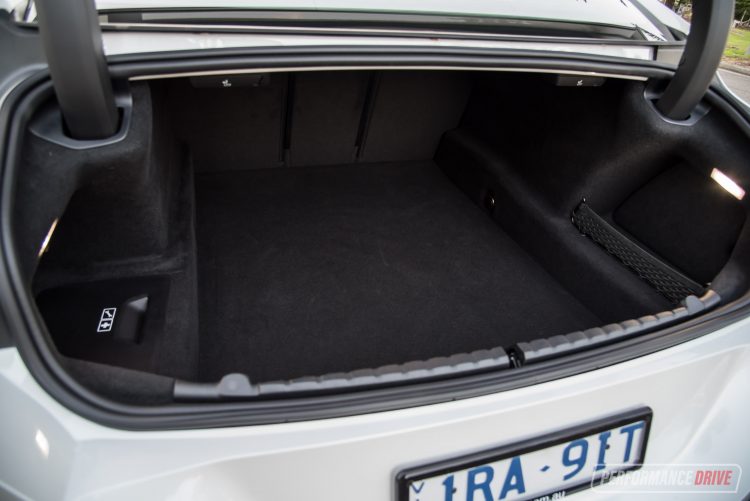 With fairly serious efforts in weight reduction and optimisation, and BMW’s renowned telepathic-like steering, does the M850i Gran Coupe drive little a nimble sports car? In short, no. It’s more majestic than that. It glides around, partly thanks to the standard Integral Active Steering (rear-wheel steering). Drivers can also toggle the standard Adaptive M suspension ‘Professional’ grade, which includes Active Roll Stabilisation.

In tighter bends, such as exciting mountain passes lined with many hairpins, the M850i can seem long-legged. But with that breathtaking 4.4-litre twin-turbo V8 pounding the tarmac, the time spent between corners is seriously limited. A clever all-wheel drive system means you can literally nail the throttle right at the apex and the big daddy GC catapults immediately and relentlessly. It climbs speed with rapid-fire gearshifts, and well before you know it you’re already at the next corner. 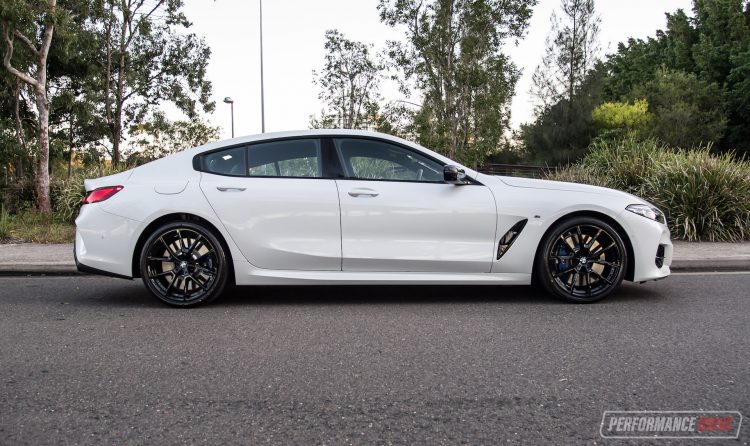 We love this engine. You could mistake it for a full BMW M engine. There’s a storyline, a series of characteristics that it goes through as it builds revs, with the bi-modal exhaust gargling and bellowing all kinds of tantalising noises along the way. At 6000rpm the unit produces 390kW, which is huge for a non-M model. But it’s the torque that really blows your mind. Between 1800rpm and 4600rpm there is a 750Nm meteorite that gravity has to deal with.

Pair all of that with the all-wheel drive system and the quick-shifting ZF eight-speed auto, it’s no wonder 0-100km/h is done and dusted in just 3.95 seconds, according to our Vbox (BMW claims 3.9). We also clocked 0-200km/h in an incredible 13.08 seconds, and the quarter mile in 12.06 seconds. Interestingly, these times are slightly behind what we achieved in the M850i convertible last year (3.93, 12.88, and 11.98, respectively). The differences are so minor though it could be down to something as trivial as wind direction or fuel level. 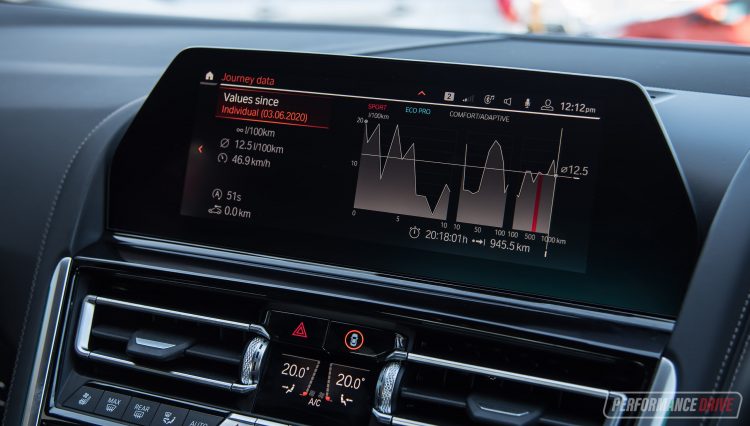 What will really appeal to buyers in this market is that, despite all of that acceleration and cornering capability, the M850i GC is a fine luxury car. BMW hasn’t ruined the ride quality by fitting really stiff suspension. And the steering is pleasantly light but with enough feel to support enthusiastic driving. Having recently driven the proper M8 (review coming soon), we can confirm the M850i will appeal to traditional 8 Series fans whereas the M8 is more of a hardcore driver’s machine. There are compromises in the M8, but not with the M850i.

This powertrain is fairly practical and suitable for everyday use as well. You can leave the exhaust valve closed so it quietly purrs through town, and the fuel consumption isn’t as bad as you might think. According to the official stats the combined cycle is rated at 10.7L/100km – not bad for an AWD V8. During our week of testing (945km), which included a run up to the Blue Mountains from Sydney and some performance testing, we averaged a respectable 12.5L/100km. 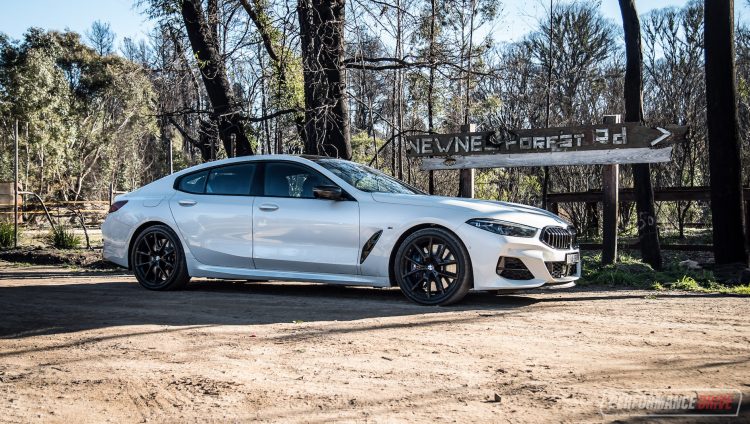 BMW hasn’t just reinvented the 8 Series nameplate and what it stands for, it has reinvigorated the idea of the stately, super-fast large sedan by giving it a modern and fashionable four-door coupe body. Sedans might be dwindling in popularity, but this swooping alternative should attract both traditional and brand new customers.

In M850i form, the Gran Coupe is ridiculously powerful and fast, yet very smooth and comfortable. We think it will be the pick of the entire 8 Series range for the majority of buyers. It does the most things, and it does most of them extremely well.

CONS:
– Front end a little too soft at times, it can bounce and bottom-out on humps
– Very expensive