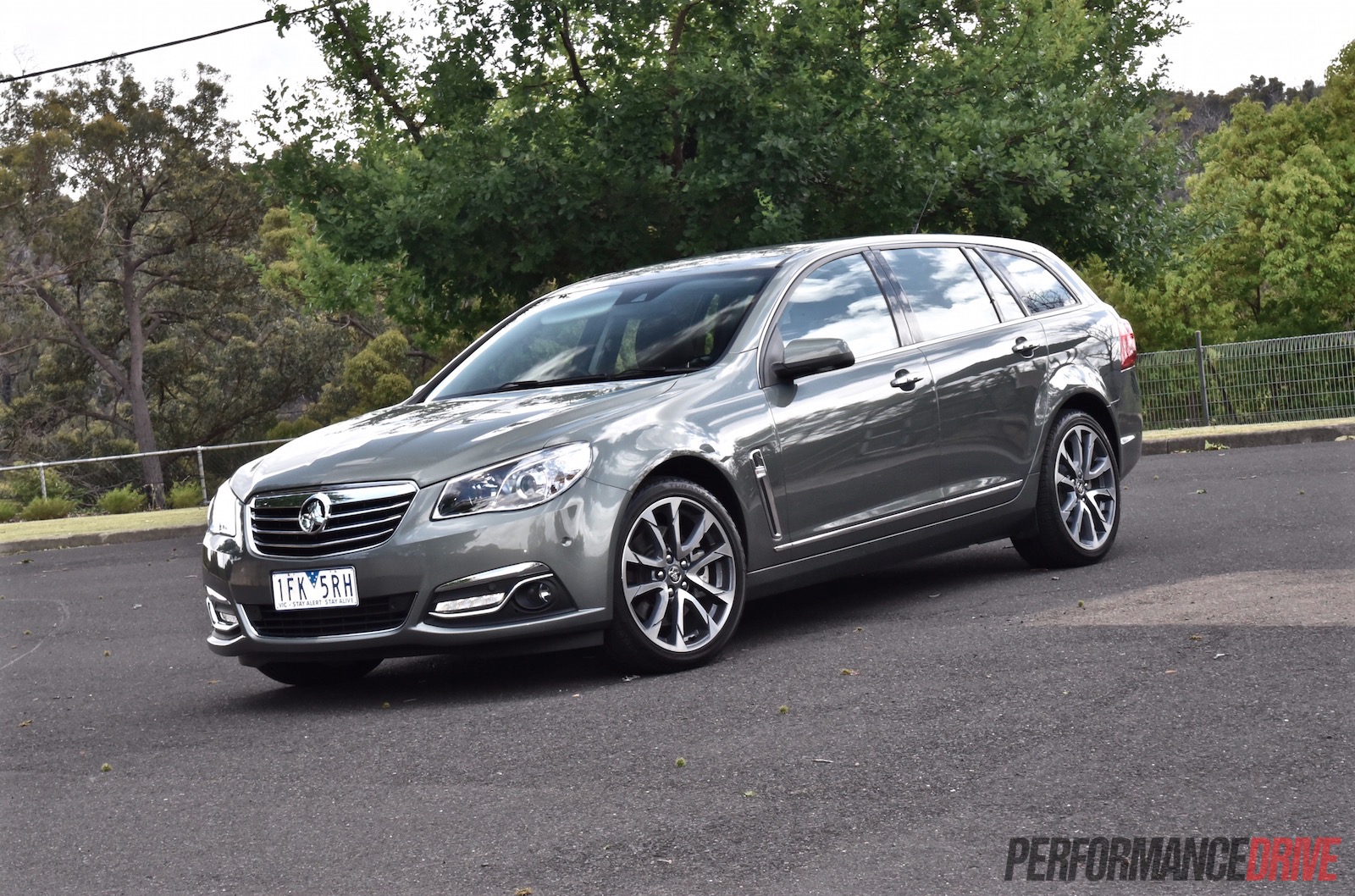 The new 2016 Holden VF Series II Calais V Sportwagon sits in the market as the only, rear-wheel drive V8 luxury wagon priced under $100k. Unfortunately, it won’t be around for much longer. We’re going to miss it. A lot. 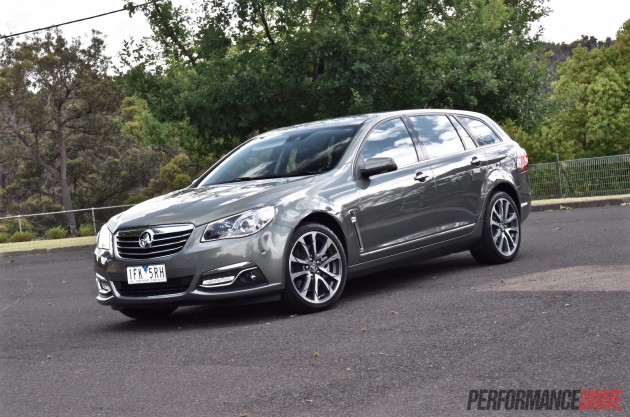 There’s something admirable about a vehicle that can take the family, pets and every piece of luggage you own on a comfortable long distance trip, yet when the mood strikes, throw you back into your seat to the sound of a bellowing V8 soundtrack.

The Calais V is one of a few new VF II Commodores that are available with an all-new optional LS3 6.2-litre naturally aspirated V8 engine. This is the most powerful V8 Holden (not HSV) has ever fitted to any production Commodore, generating 304kW and 570Nm. 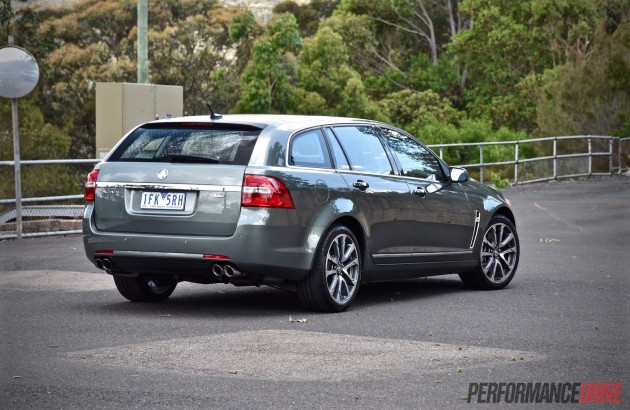 Approaching the car, it’s hard to deny that the design language employed by Holden makes the Calais an attractive proposition. The subtle lines making their way down the bonnet allude to a monster lurking beneath, and chrome highlights add a more premium aesthetic.

Stepping inside the Calais for the first time, you’re welcomed into an undoubtedly large and comfortable environment, filled with black leather and cream suede-looking contrasts around the cabin. Overall, no changes have been made since the 2013 introduction of the VF, and there remain some cheap plastics employed. Nevertheless, nearly all surfaces offer a premium touch, and fitting within the vehicle’s price tag.

With prices kicking off at under $58k, you’d expect the Calais V to come very generously equipped. And it is. After, it is the most luxurious Commodore Holden makes. Standard features include cruise control, power windows and mirrors, keyless entry and start (with remote starting), a multi-function trip computer, dual-zone climate control, heated front seats, electrically adjustable driver and passenger seat, rain-sensing wipers, and a head-up display with adjustable brightness and height and multiple display modes. 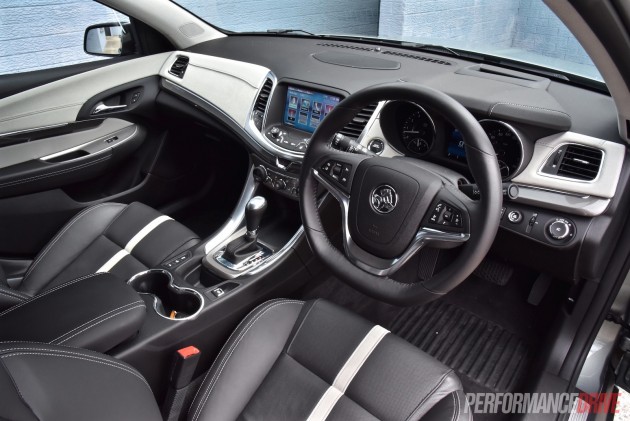 The eight-inch MyLink infotainment system features Bluetooth, aux and USB input, as well as navigation, with audio apps Pandora and Stitcher. The system is the same one employed across almost all of Holden’s modern range. It works well, albeit a little slow to load. It’s not quite as advanced or as fancy as some of the rivals systems either.

In terms of practicality, there is more than adequate room for all passengers, as well as an 895-litre boot (with the seats up), and a massive 2000 litres with the rear seats folded down. In other words, if it exists, there’s a high chance you’ll be able to fit it in. 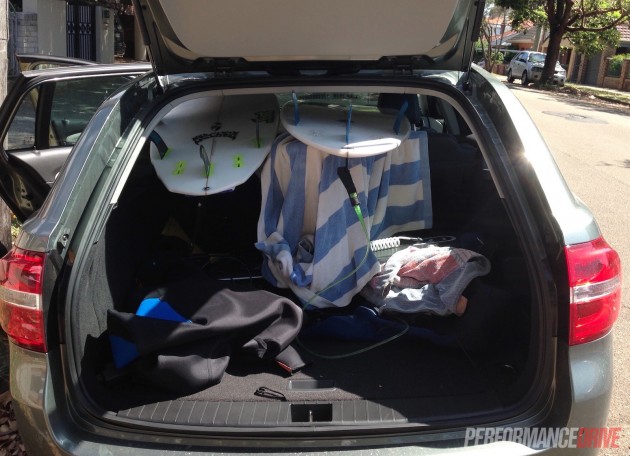 Holden has managed to engineer a vehicle with two distinctly different personalities… Who doesn’t like getting two cars for the price of one? Let’s start with how it handles the urban run-around.

Pressing the start button is like awakening a sleeping beast, with a roar, crackle and pop from the bespoke, Baillie-tip exhaust system to remind you of the power of the LS3 engine. Despite having been fitted with an engine large enough to power a medium-sized city, the Calais proves to be an undeniably relaxing, effortless, and in the best sense of the word, boring car to pilot through the city. Simply throw it in D and waft away on the ample amount of torque available anywhere in the rev range.

The Calais hovers around town comfortably thanks to its suspension calibration, which has an emphasis on touring rather than blistering lap times – after all, who wants to take the family on a long distance trip in a car that feels like a jackhammer? Bumps and divots are absorbed without a fuss, and the Calais simply soldiers on with no complaint transferred into the cabin. The six-speed automatic transmission is up to the task too, offering smooth gearshifts around town. Altogether, the Calais feels soft, mature, sophisticated, and dare we say, almost European… Almost.

Holden has fitted the Calais with a bi-modal exhaust system which really adds to the appeal of this sleeper. Thanks to this, under normal throttle input, the Calais remains quiet. Really quiet. You could be driving a four-cylinder Cruze for all you know. However, when the road opens up and an overtaking lane appears, all valves open up in the rear mufflers to produce what can only be described as the world’s most brutal symphony of eight cylinders. There is also a mechanical sound enhancer, which transmits ungodly notes from the engine bay into the cabin.

Speaking of which, the main event… What does a nearly two-tonne (1820kg) station wagon feel like in some fast bends? As it turns out, an absolute riot. 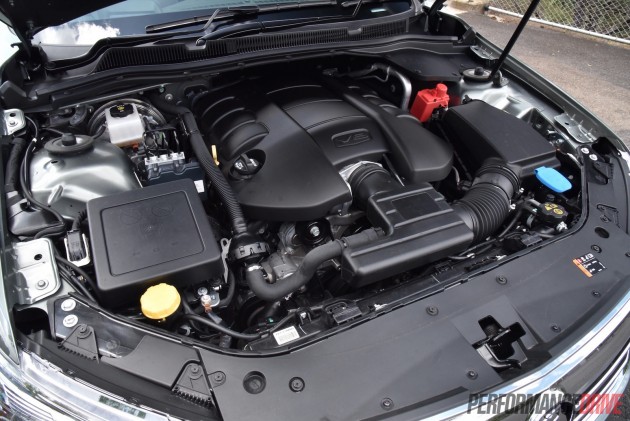 Holden has ditched the L77 6.0-litre V8, producing 260kW, in favour of a 6.2-litre LS3 V8, which churns out a monstrous 304kW at 6000rpm, and a stomach-shifting 570Nm of torque at 4400rpm. In a world fast-filling with forced induction, the linear and relentless acceleration from the naturally aspirated V8 is a breath of fresh air. The power is impressive and instant, and should leave no enthusiast disappointed by the acceleration. We timed 0-100km/h in 5.2 seconds.

Sure, there’s a 6.2-litre V8 ready to tear your head off, but Holden has held onto the soft touring suspension setup, which makes performance that much more accessible for those of us who aren’t Lewis Hamilton. This isn’t a car to set a new PB on the track, but it is a car that can fit almost all your belongings, and encourage you to take the long, windy road home instead of the motorway.

The VF II Commodore has been developed and engineered for Aussie conditions, on tracks like Phillip Island, and roads in Alpine Ranges and the Surf Coast. Suspension-wise, the MacPherson strut system at the front and multi-link system at the rear of the Calais have been engineered to deliver an impressive amount of grip at the front axle, especially considering its weight. The steering feel is direct, nicely weighted, with a muscle car-like heaviness transmitted through the wheel, informing the driver exactly what the front wheels are up to.

Under harsh braking, you can feel the rear-end wiggling around trying to maintain composure, and under some prolonged punishment, the steel discs translate some fade back to through pedal. But again, this isn’t a track-bred model. The fact it can perform at these impressive levels of performance is a testament in itself.

Combined with new 19-inch alloys wrapped in Bridgestone Turanza 245/40 R19 front and rear rubber, and the traction and stability control systems switched off, the Calais has absolutely no problem getting its rear end out – we’ve driven shopping trolleys that are harder to manage than a misbehaving Calais. Thanks to its independent rear suspension and standard limited-slip differential, oversteer is lively yet easy to manage.

All of this fun does come at cost, of course. The Calais is very thirsty. If this is a genuine qualm for you dear reader, please note the more economical 3.6-litre V6 Calais variant will save you $7500 and offers an average consumption of 9.3L/100km. The combined cycle figure for the V8 is 12.9L/100km, which we were able to better on the highway. Though, our combined cycle returned a figure of around 14.8L/100km. This consumption rate is about three times your average hatch, which means you’ll be spending about three times as much money at fuel stations. You do get impressive performance, but it is something you need to think about. 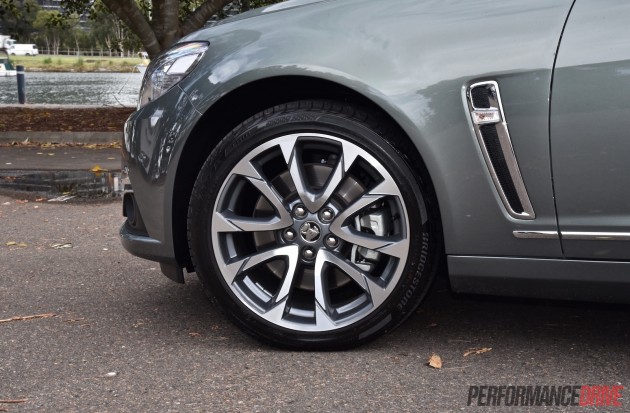 Sure, this isn’t the cheapest wagon on offer from Holden, but in the same respect, we challenge you to find another sporty wagon out there packing this kind of heat and offering this much space for less than $60k. Its generous levels of equipment and blistering performance combine to be one of Holden’s most impressive all-rounder achievements. Ever.

Yes, it’s thirsty, but let it be said that buying this car and complaining about its economy is like eating at a steakhouse and complaining about the lack of soup. It’s completely beside the point of what this product is about. In our eyes, it is exactly the send-off that the iconic Commodore deserves.