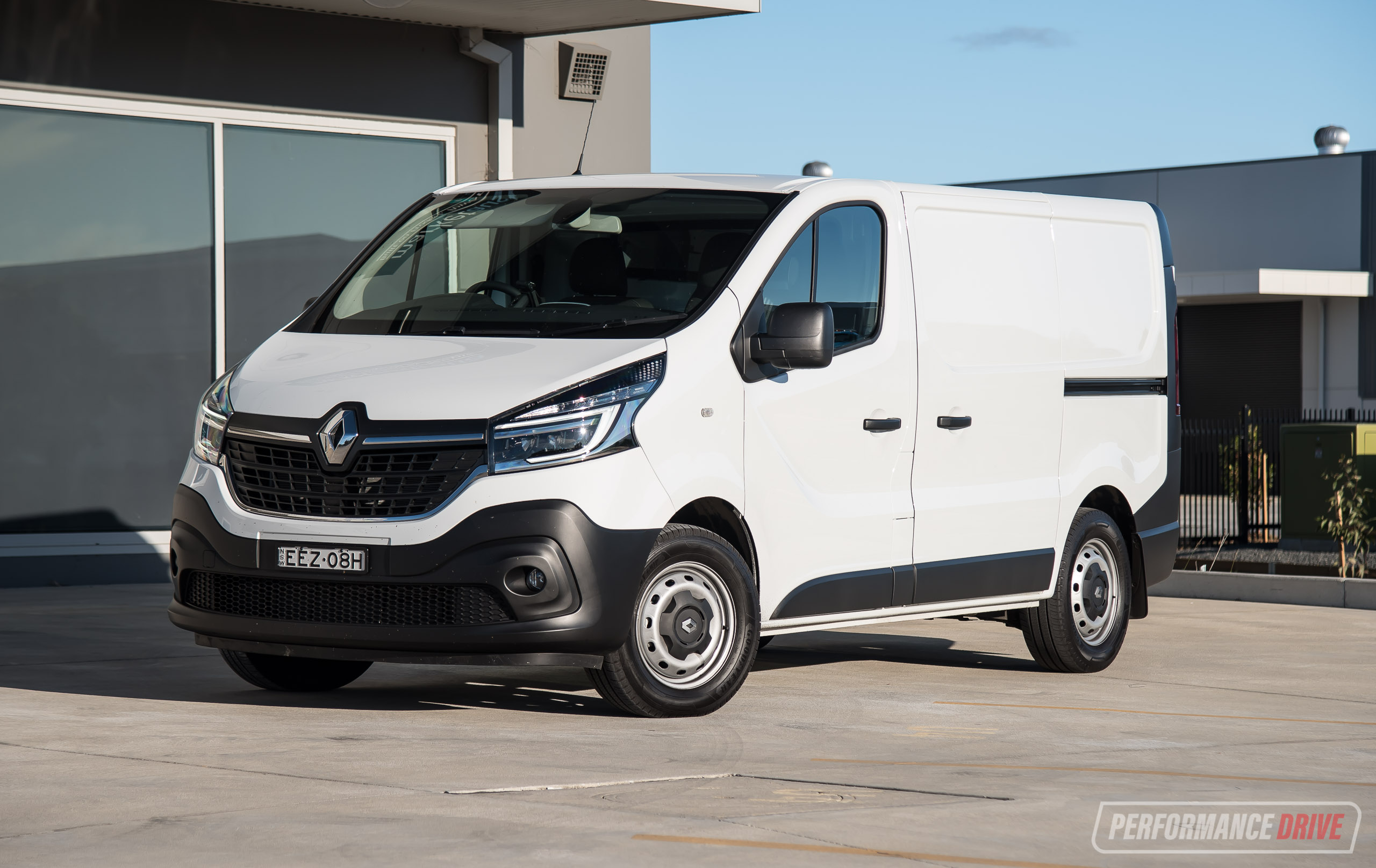 The 2020 Renault Trafic stands out in its class with impressive payload and towing capacities, a strong turbo-diesel engine, and some innovative features and packaging. It that enough to fend off the big guns? 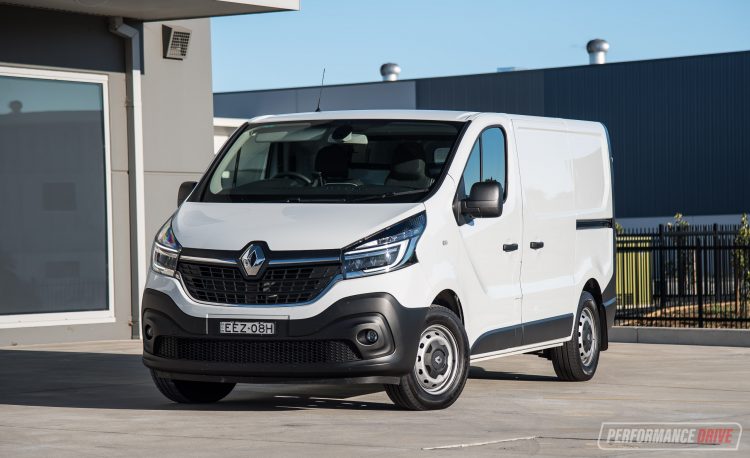 Specifically, the ‘guns’ we’re referring to are the Toyota HiAce and Hyundai iLoad. So far this year (through June) Toyota has sold 3262 examples of the HiAce in Australia, while Hyundai has shifted 1666 iLoads. The Ford Transit is also a very popular contender, contributing 1233 sales to the market segment. Where does that leave the Renault Trafic? The local arm has sold 784 units according to VFACTS figures, which is enough for a respectable fifth place.

Renault offers two main versions of the Trafic van in terms of commercial applications – an additional Crew Lifestyle model is available as well. There’s the tradie-spec Pro, only available with an 85kW 1.6L turbo-diesel and manual transmission, and then the Premium which comes with a 103kW 1.6 twin-turbo diesel manual or a new 125kW 2.0L turbo-diesel with an EDC auto. These come in short wheelbase (SWB) and long wheelbase (LWB) body styles. 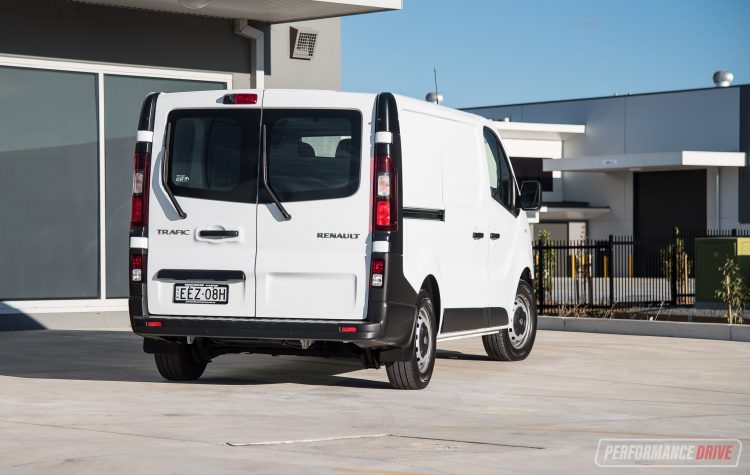 A suitably chic and interesting design has been applied to the exterior of the 2020 Trafic. Renault’s trademark diamond badge at the front, distinctive headlights with PureVision LED technology as standard, and a big smiley grille provide a unique theme for the otherwise boring and boxy vehicle category. Obviously hardly any buyers will put design as a top priority in this market, but it should be taken as a bonus in the case of the Trafic.

Stepping up into the cabin is easy thanks to a deep step platform, although, some extra grip groves would be welcome as the surface is plastic and can get slippery in wet weather. There isn’t a grab handle on the A-pillar either, like there is in the Toyota HiAce and Hyundai iLoad. But the seat height is just above the average hip point so it will be a matter of simply sliding in and over for most people. 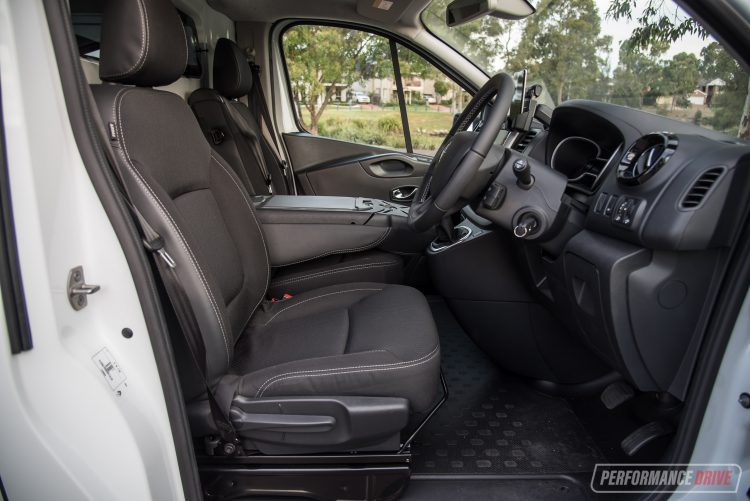 Lots of hard plastics are used for most surfaces inside, however, this is a good thing as the material is hard-wearing and great for protection against spills and muck. The floor is carpetless too, with textured plastic blending and moulding over the entire floor. It’s now illegal to eat a pie while driving, but once you’re stopped, all of that slopped sauce and gravy should be pretty easy to clean up.

Up on the dash is a comprehensive 7.0-inch touch-screen multimedia unit. It comes packed with Android Auto and Apple CarPlay as standard, as well as a rear-view camera and sat-nav. This stuff might seem pretty standard for a passenger car but it is impressive kit for a work van. There’s a USB port so you can play your favourite tunes as well, although sounds are sent through a basic two-speaker stereo. 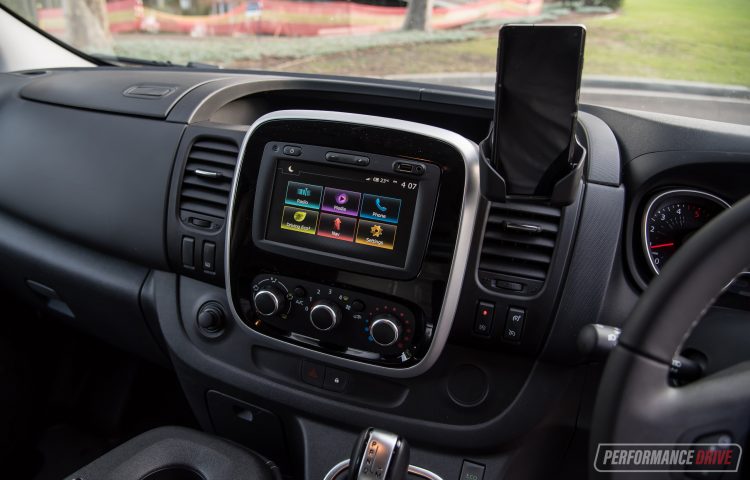 It’s disappointing to see Renault is persisting with offering uselessly shallow cup holders. There’s a flip-out one from the protruding dash fascia which really is completely useless, and another one that’s slightly deeper featured on the big flip-down centre console. You will find a deeper cup holder up in the corner of the dash, right near the A-pillar. But keep in mind whatever drink you place there will be subject to piercing sunlight.

Renault has been quite innovative by creating a special centre console area. It houses a clip-in clipboard holder, and it can be positioned to face either the driver or passenger. We feel there is a lack of general storage for smaller items around the place. There’s nowhere really for your wallet or snacks. Except, right up and over the centre of the dash there is a cove/cavity, but it’s a big stretch. The phone holder is a nice touch too but it doesn’t really hold modern phones (our Samsung S10 didn’t fit). Alternatively, you can just shove it into the lower section and it will remain fairly secure. 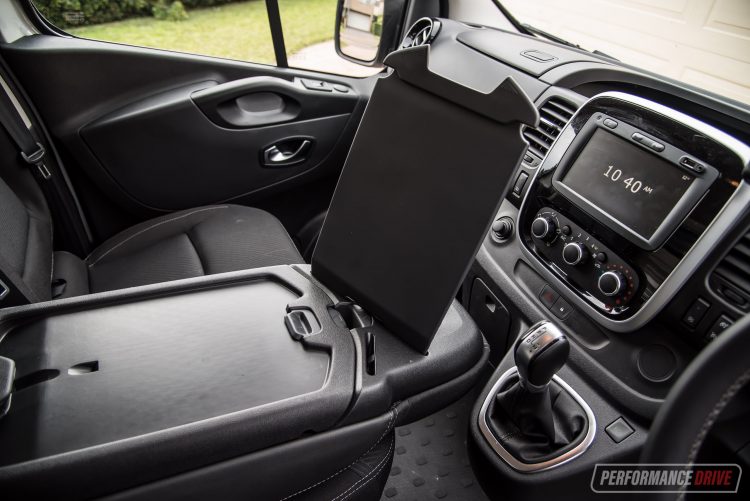 At first we had concerns that the combination of front-wheel drive and a dual-clutch auto might not be heavy-duty enough for this market segment. After all, dual-clutch autos are mainly designed for efficiency and performance. But even so the potential towing capability on offer here compares well to the leading rivals.

Officially in terms of towing, this Trafic SWB EDC auto is rated at 750kg unbraked and 1715kg with a braked trailer. That trumps the equivalent RWD Toyota HiAce diesel auto, which is rated at just 400kg and 1500kg, respectively. The payload capacity is also impressive, at 1216kg for this configuration. Toyota hasn’t provided an Australian payload rating for the HiAce, but for reference the Hyundai iLoad (also RWD) diesel auto is rated at 1096kg.

The cargo area is measured at 5200L, and presents 16 tie points, a 12V socket right at the back, and two lights. You also have a load width of 1662mm, or 1268mm between the wheel arches, and a load area length of 2537mm. Going for the LWB version sees the length grow to 2937mm (payload also increases to 1250kg). A cargo area height of 1387mm is shared across SWB and LWB body types. 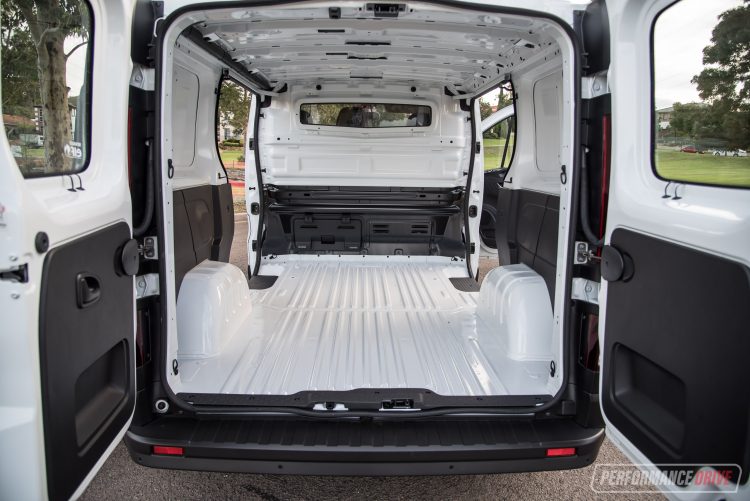 This engine, despite being a diesel, is surprisingly refined, smooth, and quiet. According to our decibel gauge the peak noise level is 79dB across the 60-110km/h sprint. That includes during kick-down, which happens very quickly and almost seamlessly thanks to the dual-clutch auto. That’s a low noise figure, let alone for a hollow commercial vehicle. We think the rigid steel bulkhead behind the cabin certainly helps in this department, optimising the vehicle’s long-distance comfort while potentially reducing fatigue.

With an 80-litre fuel tank and an official average consumption of 7.3L/100km, the theoretical range is 1096km. During our week of testing, which included a few decent highway runs (70km at 110km/h), the Trafic averaged a reasonable 8.3L/100km. That means you could expect a real-world range of about 964km. Keep in mind our testing included a number of full-throttle performance runs but it was also driven with little to no load in the back for most of the week. 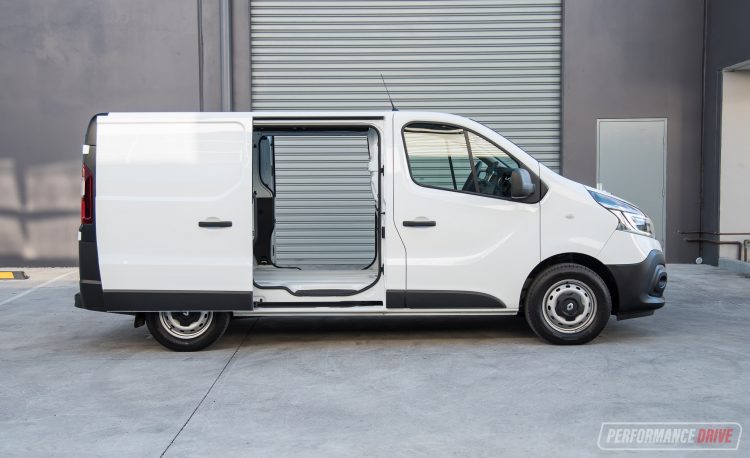 When it comes to turning and making your way across a country road, the Trafic is genuinely fun to drive. The outward visibility, as with all vans, makes for a really engaging journey. The sense of speed is much greater than a normal car, for example. It also handles the bends well with its low centre of gravity, cornering flat and returning very little body roll. Eco-focused 215/65 tyres are industrial-strength but it means there is some tyre fold under strenuous lateral force.

Performance from the engine is definitely more than adequate for this class. We clocked 0-100km/h in 10.50 seconds, which is great compared with other vans that we’ve tested. During overtaking the engine is responsive, providing its full 380Nm from just 1500rpm. And while top-end power isn’t exactly exciting, the engine loves to surge through gears quickly and effortlessly, using minimal revs. We’re not sure most buyers will really appreciate or enjoy the EDC dual-clutch auto, but nonetheless it does provide instant shifts and supports rushed and energetic driving styles. 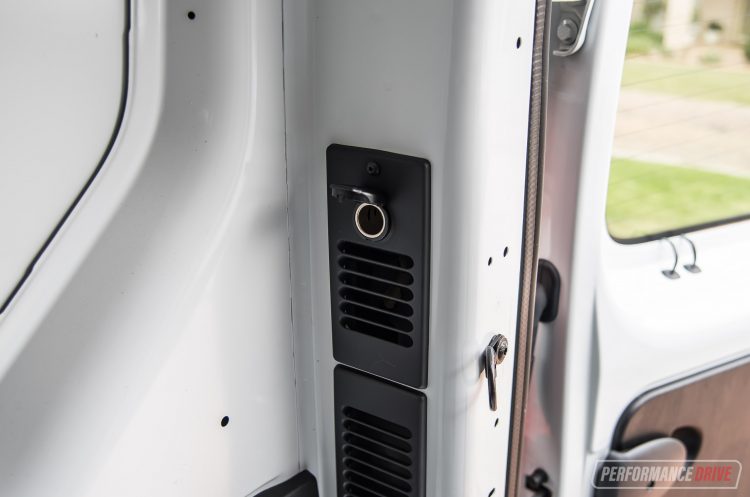 An area where Renault does fall it a bit short is with active safety. Autonomous emergency braking with pedestrian detection (and adaptive cruise control), rear cross-traffic alert, road sign recognition, and blind-spot assist are non-existent. These technologies are now standard on the latest Toyota HiAce, for example.

Renault has provided roll-over mitigation, traction/stability control, and hill-start assist. That latter feature comes in handy with the dual-clutch auto as it can otherwise roll back on hills.

This is a surprisingly fun vehicle to drive. The cabin seems well-insulated with very little engine noise entering the cabin, which means the drive is as refined as some passenger cars. Powertrain performance is certainly good enough to meet or exceed the segment expectations, and Renault has done some clever things inside, what with the standard media system and segment-minded features.

Really, our only concerns are the lack of general storage in the passenger compartment, the tiny cup holders, and the fact that it does miss out on some advanced active safety systems. It’s also worth noting Renault offers a three-year/unlimited kilometre warranty as opposed to the now-common five-year arrangements offered by most rivals.

CONS:
– Lack of general storage for nicknacks inside, useless cup holders
– Falls behind on some advanced safety tech
– 3-year/unlimited kilometre warranty is behind market benchmark