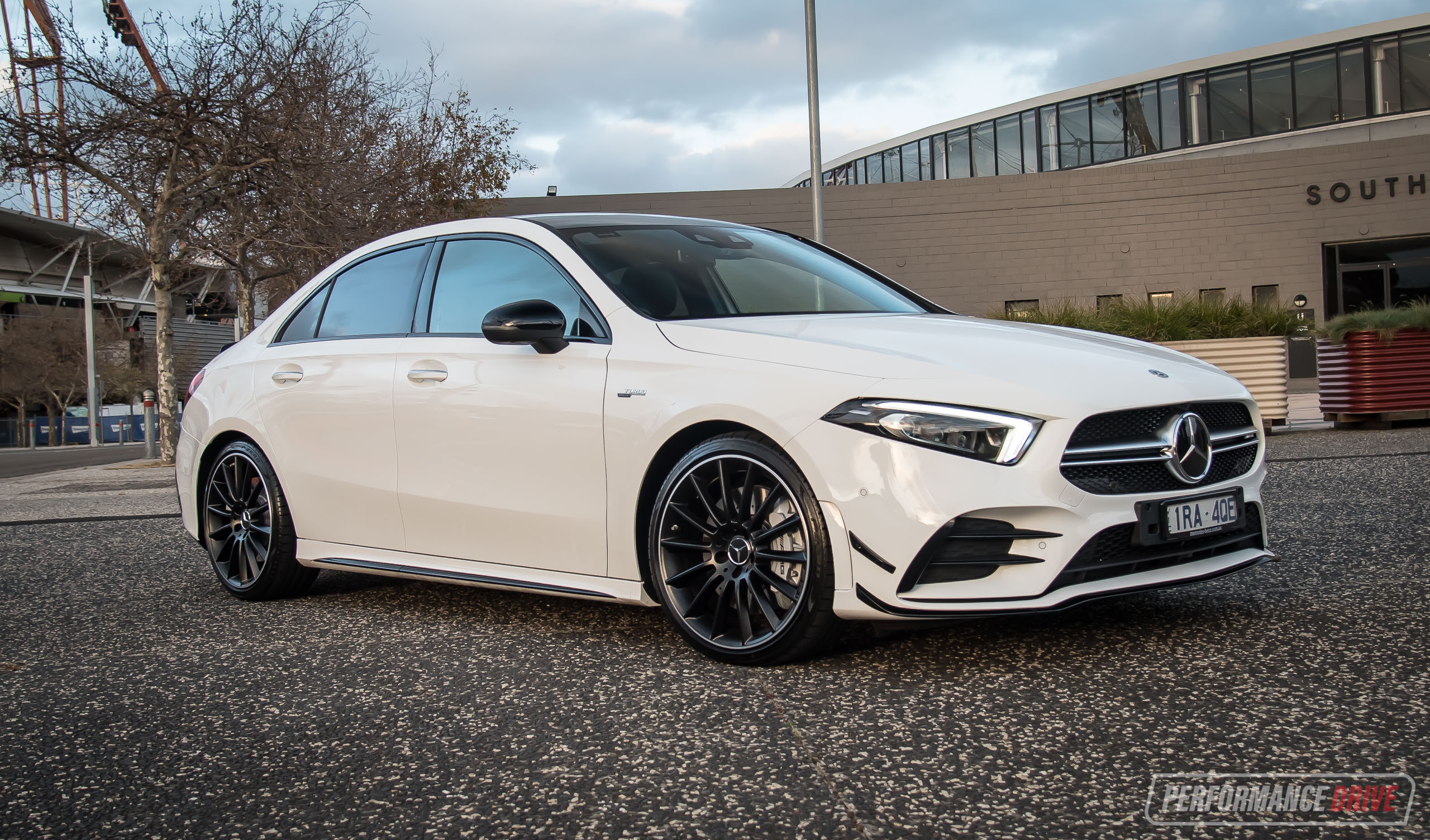 Looking to buy a fast hot hatch but find the current crop too ostentatious and boisterous? The 2020 Mercedes-AMG A 35 sedan could be the perfect alternative you’ve been looking for. 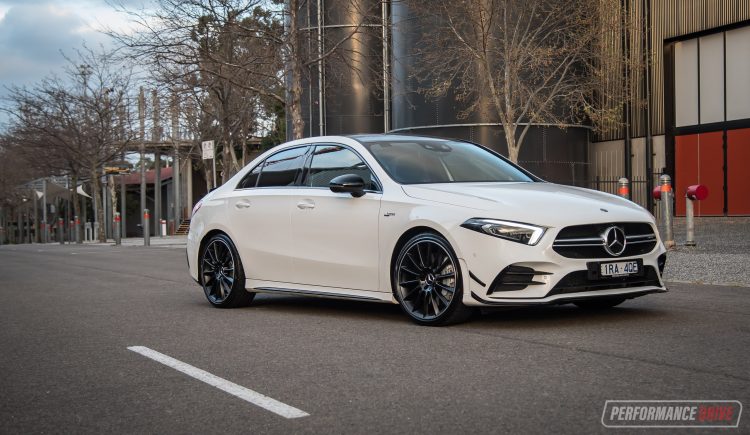 It sits in the quieter corner of the Mercedes-AMG showroom as the more sensible brother to the A 45 S. It is still very much a product of AMG, featuring bespoke suspension, interior, and powertrain tuning. But it’s simply turned down to level 9. In some ways, it is the cooler, more dignified option. 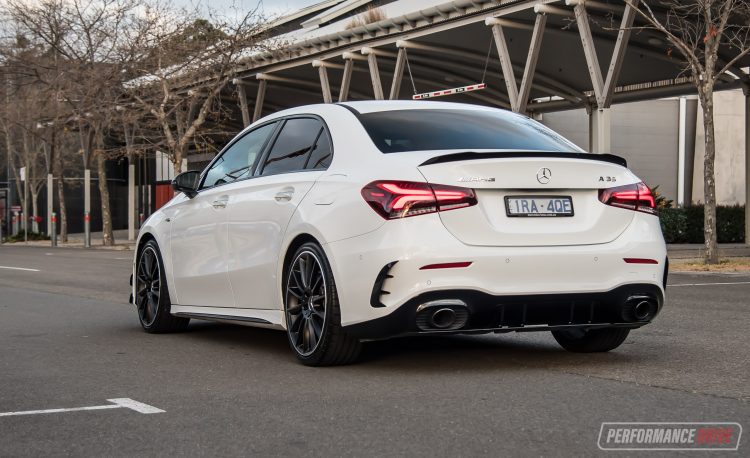 One of our favourite aspects to this car is its design. We love the subtle look, and it seems to go better in sedan shape. It almost blends in with the crowd, flying under the radar. Although, there are plenty of discreet telltale identifiers, such as four-piston AMG brakes, an AMG aero kit, and lowered sports suspension. This test car features optional 19-inch multi-spoke wheels in matt black – which are just $790 – contrasting perfectly with the white bodywork. It also showcases the AMG Aerodynamics package ($2490), which includes flicks on the front corners, more aggressive bumper bar vents, and the adorable little black lip spoiler at the back.

Speaking of options, Mercedes-Benz appears to have done really well to package the A 35, leaving little reason to option up. Having options on a premium car is good as it gives buyers the opportunity to personalise their vehicles. This is sometimes quite important for the premium market; if you’re buying something nice for yourself, chances are, you don’t want something that’s run-of-the-mill. 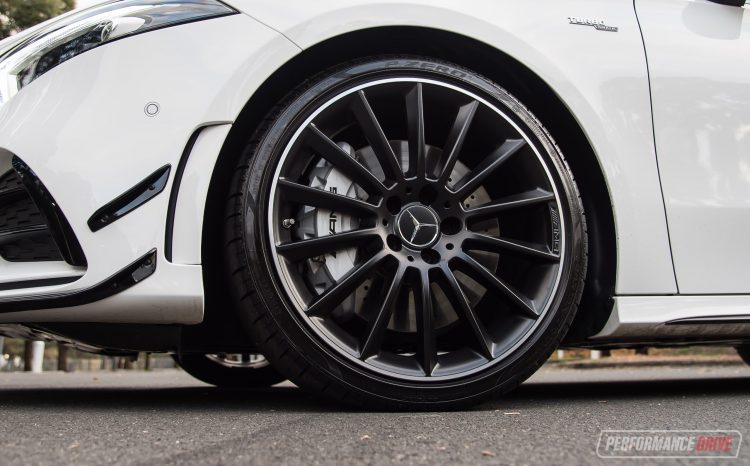 However, having a look at the spec sheet, it seems like most of the options available here are for a personalised touch. Bigger and unique wheels, the aero kit, and special AMG seats are pretty much the gist of it. You can opt for the Vision Package, which adds side and front cameras, and adaptive headlights with active shadowing for just $990. That’s really impressive. We could mention some other premium marques that charge an arm and a leg for that kind of thing. Heated and cooled front seats are just $790 as well.

Without ticking anything though, the interior of the A 35 presents really well. Two 10.25-inch screens sprawl across the dash, displaying some of the finest graphics we’ve ever seen. Particularly for this segment. These run the latest MBUX operating system with voice and touch control. A touch pad on the centre console is an easier reach than the screen, and there’s an exquisite rolling barrel, crafted from steel, providing volume control. 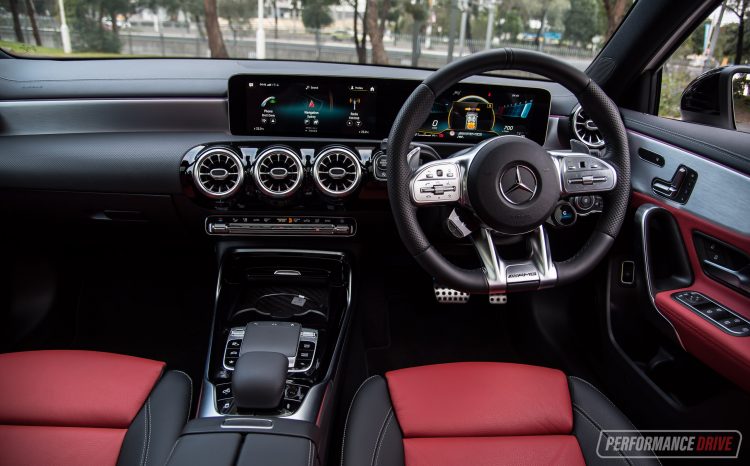 The driver also has two matching barrel-type rollers on the steering wheel, and two tiny touch pads which work a bit like mini joysticks for the corresponding left and right screen. While all of this is clearly very sophisticated, and the design is breathtaking (check out those awesome climate vents), we think Mercedes has placed fanciness in front of functionality in some areas.

Some of it is a bit over the top, in our opinion. This is a car, after all. And we think some of this stuff can be distracting while driving. There is a lot of information on display as well, including a cruise control ‘light’ that doesn’t seem to go away, even when switched off. Fortunately, there are a number of different display modes to choose from, including a reduced mode. 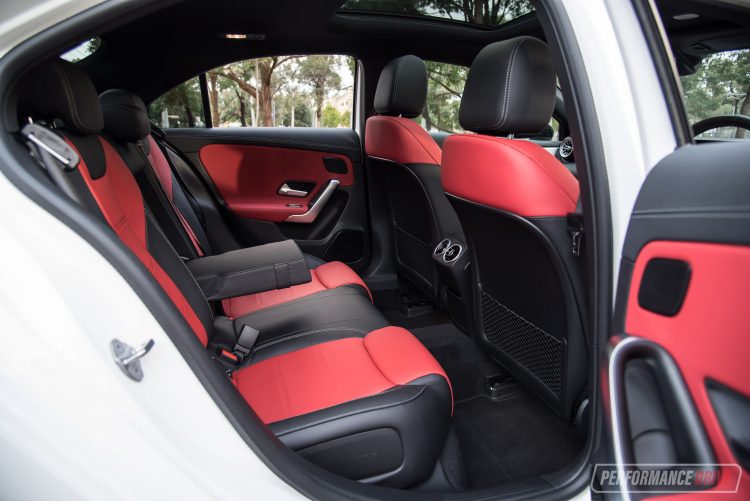 Another criticism is the touch pad system on the centre console. Now, it’s great that Mercedes is really pushing for voice command, which is, in our opinion, much safer that playing around on any touch-screen. And the voice command system here is very good, and can even learn your habits and common preferences. But we’re sorry, this touch pad is pretty much the same as Lexus’s infuriatingly fidgety touch pad system. It requires a lot of your attention to make menu selections, and some functions require too many movements. Again though, there are the controls on the steering wheel and the screen is touch-capable.

As for cabin space, this is a nice, natural environment. The driving position is spot-on, and there’s ample adjustment available, with wide-opening doors. Rear seat space is also good for this class, with those impressive climate vents carrying across into the back. Boot space is rated at 430L, which is up 60L on the hatchback. Although, the hatch can expand to 1210L with the rear seats folded down. Even so, 430L here is decent for this class. 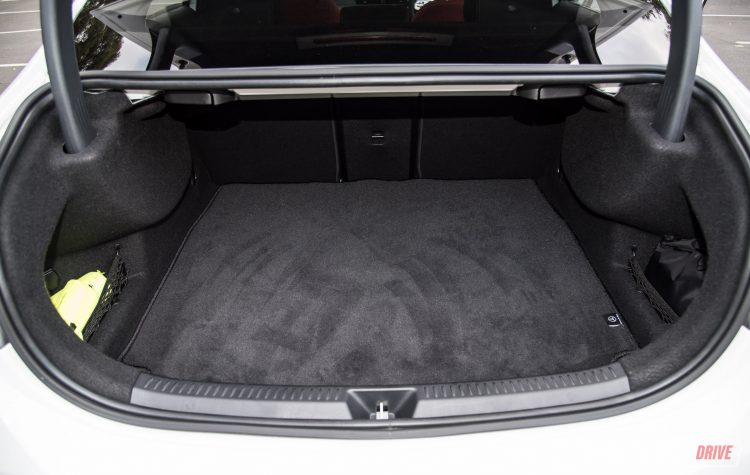 We can kind of sense this engine is capped in some way. Well, peak power (225kW) is available from just 5800rpm. It works through the gears effortlessly, and with completely linear acceleration. This isn’t necessarily a bad thing, and it certainly is in keeping with the A 35’s somewhat conservative personality. We just can’t help but wonder how hard and how high the A 45 S would scream. Peak power in that, a monster 310kW, is achieved at a much more hot-hatch-like 6750rpm.

It’s not simply a case where the engine has a restrictor shoved on it. Mercedes calls this engine the M260, while the A 45 engine is codenamed M139. We also notice the compression ratio in this is 10.5:1, while the A 45 is much lower, at 9.0:1. In terms of mechanical fundamentals, this means the A 35 should rev quicker, with less turbo-lag. We haven’t driven the A 45 S so we can’t really comment on that. But this unit shows no evidence of lag. It revs up freely, pretty much like a naturally aspirated engine. 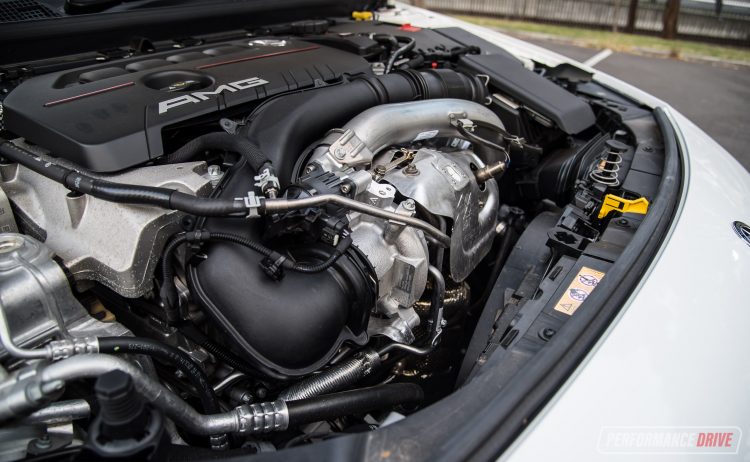 On the other hand, we do notice some delay with this seven-speed dual-clutch auto. Typically of these types of transmission, low speed driving, particularly when going from reverse to drive, you do need to wait before the system actually engages and starts moving. Applying a decent dose of power straight off the mark also results in a minor hesitation. There is an exhilarating launch control system though if you really want to dart off to a dashing start.

Across the standard 0-100km/h sprint, Mercedes claims the sedan takes 4.8 seconds, while the A 35 hatch takes 4.7 seconds. We can’t figure out why there is a difference. The sedan is only 11kg heavier. What’s also strange is that the hatch has an official fuel consumption average of 7.6L/100km, while the heavier sedan is rated at 7.4L/100km. 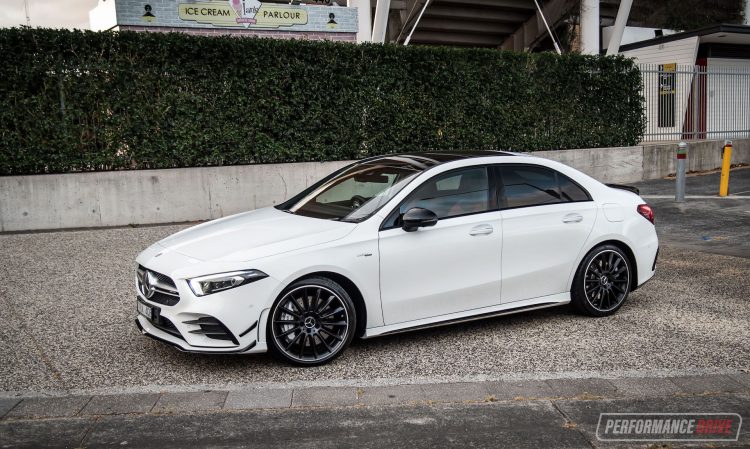 During our tests, on a private road with the Vbox Sport, we clocked a best 0-100km/h in 4.96 seconds, and 0-200km/h in 18.83 seconds. These are obviously cracking times, especially for something that isn’t even a top-rung model in its range. Compared with its arch nemesis, the new BMW M135i xDrive, the A 35 is 0.6 seconds quicker to 100km/h. Excellent, considering the BMW offers 450Nm over this car’s 400Nm torque output.

Speaking of that BMW, the A 35 sedan is heavy in comparison. The A 35 sedan weighs 1581kg, which is 86kg more than the M135i’s weight of 1495kg (both tare). You wouldn’t really know it from behind the wheel, though. This feels very nimble and responsive, changing directions with utter confidence and precision.

The steering feel is highly engaging as well, perhaps even more so than the M135i’s setup. We also found very little understeer in this. You can flick the weight around and provoke the tail to slide out as well, in a fun yet controlled manner. At which point you can jump on the power and the 4Matic all-wheel drive system quickly pulls you back into line, straight and stable.

We think the interior can be a bit overwhelming, with all of its fanciness bombarding your attention. Once you get used to the epic graphics and otherwise open and clutter-free interior, the A 35 becomes a fine place to be. It feels more expensive and more luxurious than its market positioning would suggest.

While this powertrain is extremely linear, we feel like it is capped in some way. With peak power reached at an almost diesel-like 5800rpm, there is sometimes a wanting for more grunt in the top end. But we guess that’s what the A 45 S is for. The numbers tell the true story though, with 0-100km/h coming up in under 5.0 seconds. As a bonus, we think the handling out-performs the powertrain, and, actually, its main competitor from Bavaria too.