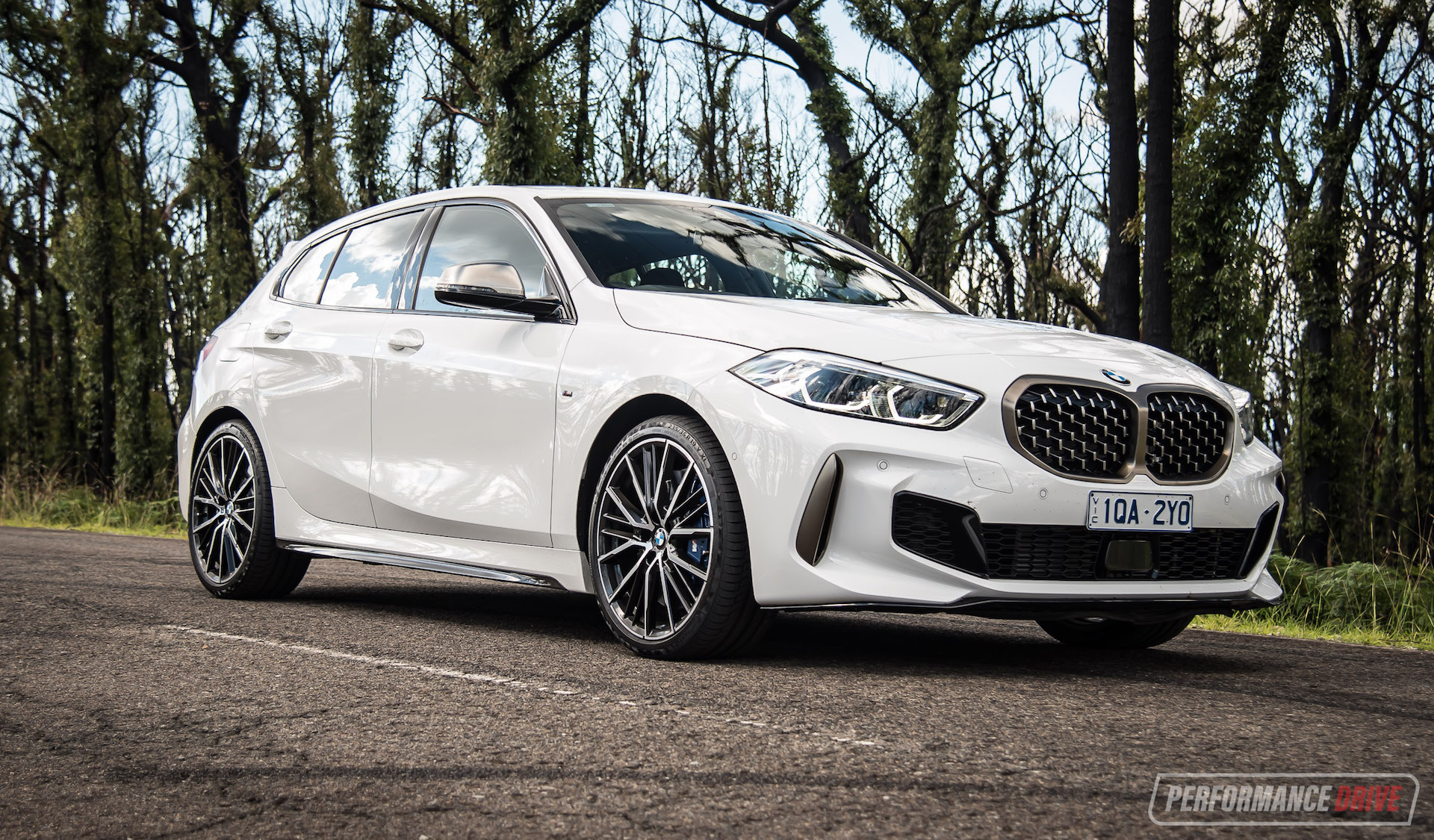 All-wheel drive. Heavily-boosted turbo four-cylinder. Practical yet purposeful hatchback design. These are the key ingredients for a great hot hatch. BMW’s M135i has switched from rear-wheel drive and dropped the lusty inline-six, but, forgetting that, on its own this has the makings for a superb little driver’s car. Yes, the latest 1 Series is now based on BMW Group’s UKL2 platform, like some MINIs. And yes, most variants are front-wheel drive. But a rear-wheel drive hatchback is very, very rare. We can’t be angry (as much as we try not to be) at BMW for switching to a layout that everyone else uses. Anyway.

This test car features the glass roof option and kicks off from $68,990. You can also spend a tiny bit more and get the new M235i Gran Coupe, which shares the same platform and powertrain. With the extra cost, there’s no doubt about it, you do get more for your money compared with the predecessor. This comes with BMW’s fantastic 7.0 operating system incorporating two 10.25-inch digital screens; one for the media and vehicle settings, and one for the instrument cluster. We’re surprised BMW doesn’t offer configurable layouts for the instrument cluster seen as though it wouldn’t be too difficult now that it’s completely digital. We assume it wants to retain some sort of tradition with gauge layout.

We can’t say enough good things about the media system and iDrive hand controller. It’s simple to use and the positioning means it’s right at your fingertips. There are enough jump-to buttons around the main dial, in case you go in too deep into a menu, and there’s a clever function where the system will remember what menu you were in last. For example, say you’re surfing around the vehicle settings and then suddenly want to change radio station, just hit media. Once you’re finished, hit the menu button and it will revert you back to the vehicle settings, where you were before. It doesn’t seem like much of a big deal but we think many of these screens are becoming quite distracting these days. So anything that reduces your required focus on them has to be a good thing in our books.

Aside from the big step up in technology, there’s heaps more room in here. It feels airy, and now there’s a sense of freedom within the cabin. The platform switch does actually widen the car, too. Exactly 34mm has been added, and that really helps. Room in the back, in particular, is now much more adequate than before. And rear passengers are treated to climate vents and twin USB-C charging ports. Even though there is still a rear differential tucked away under the body, like the old model, the boot space has grown by 20 litres. Open the hatch lid and the wide aperture exposes 380L of volume, or 1200L with the rear seats folded down (same as before). Some tie hooks and pockets help to secure smaller items from bouncing around. It’s amazing that this new 2.0-litre engine offers exactly the same outputs as the old ‘N55′ 3.0-litre turbo inline-six featured in various ’35i’ models, like the original 335i and so on – by the time the M135i hatch came along the power was tweaked to 240kW (later updated to 250kW/500Nm with the M140i, as it switched to the B58 engine code). 225kW and 450Nm from a 2.0-litre is outstanding. Only the hardest core hot hatches in the non-premium segment offer roughly this much (Honda Civic Type R, Renault Megane RS Trophy and so on).

Compared with its main and proper direct rival, the Mercedes-AMG A 35, the BMW is hairbreadth for power but edges ahead with 50Nm of additional torque. Remembering this is only an ‘M Performance’ model and not a full-cream M model, there is scope for something even hotter further down the track. AMG’s latest A 45 S, for example, would roast this thanks to its 310kW and 500Nm 2.0-litre turbo. And that brings us onto a good point. Since this isn’t precisely the hottest of hot hatches and isn’t pitched as such, it should offer decent comfort and liveability. We’re glad to say, it does. All of that torque means you don’t need to push the go-pedal deeply into the carpet to get the scenery shifting. You needn’t look like a fool just escaping from traffic at the lights, for instance. Instead, just lean on the power a bit and it will surge ahead.

Put your boot in and the four-banger will fire up. Literally. The exhaust opens up and lets out crackling and popping, like fireworks. We couldn’t find anything in the press pack but it seems like the exhaust will open automatically on full throttle, as opposed to only opening when Sport mode is activated. No big deal, just an observation. Maybe in order for the engine to achieve full power it requires maximum breathing capability. Across the usual sprints we clocked a best 0-100km/h run in 5.02 seconds. This was achieved using the launch control function. To activate that you simply need Sport mode engaged, and Sport stability control activated (a single push of the button – holding it down turns it completely off). In S mode for the transmission, which is automatic shifting but at an excited level, mash the brake pedal and throttle, wait for a few seconds while the turbo spools, then release the brake. It catapults off to a slingshotting start, with traction and g-force far exceeding what the old rear-drive model could produce.

Out of curiosity, we also tried launching by simply stomping on the throttle, which resulted in a time of 5.85 seconds. Neither of these times meets BMW’s 4.8-second claim. But it’s extremely close. We’re sure with more runs and perhaps cooler conditions it would achieve 4.8. Keeping it pinned and we also clocked the quarter mile in 13.44 seconds at 167.6km/h. The last M140i hatch we tested, a manual version, recorded a best 0-100km/h in 5.18 seconds and the quarter mile 13.81 seconds at 170.6km/h. In terms of cornering fun, we’re afraid it’s just not quite as rousing as the old rear-drive machine. Sure, there’s loads more traction so you can plant the power down and make quicker escapes from corners, especially on greasy surfaces, but it doesn’t seem as fun or exciting. In the hands of the majority of the public this AWD version will probably be quicker, and since a wider range of driver experience levels will be able to use more of the car’s potential, we must, categorically, label it as a superior tool for getting swiftly from point to point. But, again, we miss the thrill of losing the tail and holding a slide. And the accompanying inline-six sound.

If you try to drive it like a rear-wheel drive car you will get quite a bit of push-understeer. Obviously you shouldn’t be driving any front-drive-based car like a rear-drive one, but we think the understeer is more prominent here than in other front-drive and all-wheel drive hot hatches. On the contrary, backing off the throttle abruptly just before you pitch in results in surprising weight-shift and, if the stability control is off, oversteer. Being all-wheel drive, from there you simply apply power and it sorts itself out. In this regard, the tyres don’t feel right in our opinion. This test car features Continental PremiumContact 6, measuring 235/35, mounted on optional 19-inch wheels. These would be fine on a premium hatch. However, this isn’t a premium hatch. It’s a hot hatch. In comparison, the old rear-wheel drive model was equipped with Michelin Pilot Super Sport (225/40 front and 245/35 rear). Those, in our view, are far superior tyres compared with these. Obviously more expensive, though.

Lastly, the economy. One of the main reasons for downsizing is of course to improve fuel economy and reduce emissions. Well, you might be puzzled to hear the official rating for the new model is 7.5L/100km, compared with 7.1L/100km for the old auto M140i hatch. Combined emissions are also higher in the new model, rated at 171g/km compared with 163g/km in the auto M140i. We can only assume it’s the weight and load of the AWD system that’s to blame in these scenarios. According to Redbook the new model has a tare weight of 1495kg while the old one weighed 1443kg tare. We’re annoyed that BMW has switched from inline-six power and from rear-wheel drive to AWD, there’s no doubt about it. But that’s mainly because we know the old model very well. If you’re stepping into a premium hot hatch with untainted mentality, then you’d be none-the-wiser. And we envy you. You can enjoy and appreciate this, for what it is, with complete transparency. It is an outstanding little car, and the boost in practicality over the old model will make it more appealing to more of the market. For us, as they say, time heals all wounds.