The first images of the new Jeep Gladiator pickup have surfaced online, essentially confirming the name for the new body style for the iconic off-roader. 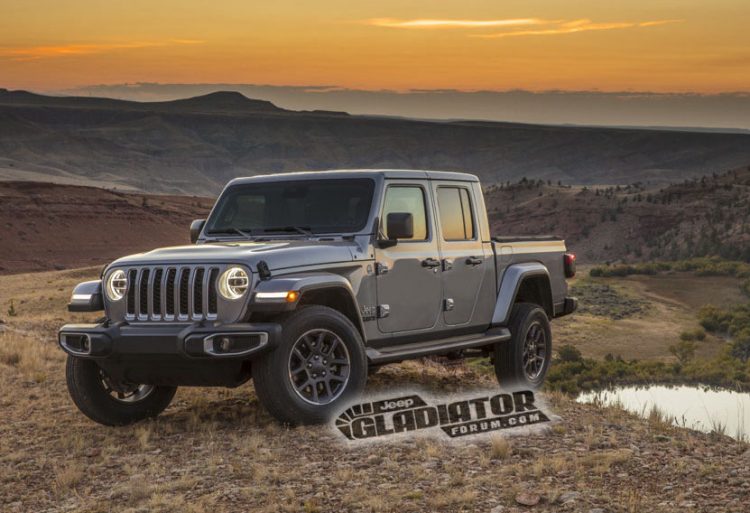 Previously thought to be named the Jeep Scambler, the Gladiator name may be brought in as a follow up of the Jeep Gladiator pickup truck concept car from back in 2005. Either way, these photos look legit, first posted up on JeepGladiatorForum.com.

The images were reportedly found on FCA’s media website before being pulled offline. It’s understood some of the finer details were also available on the site for a short time. They outlined a 3.6-litre Pentastar petrol engine paired with a six-speed manual or eight-speed automatic, as well as the new 3.0-litre EcoDiesel turbo-diesel V6 matched to an eight-speed auto.

These engines in the new Wrangler produce 213kW and 353Nm for the petrol, and 194kW and 600Nm in the case of the diesel. It looks like the diesel will be offered from 2020 while the petrol will be launched initially next year.

According to the specs, the Jeep Gladiator will offer “best-in-class” towing and 4×4 payload. It looks like there will be up to 3470kg towing capacity (7650 pounds) and up to 725kg payload (1600 pounds). The crew-cab layout features a five-foot (1524mm) steel bed, with integrated tie-down hooks and a covered power outlet. In other words, it will be taken fairly seriously as a heavy-duty 4×4 pickup.

To ensure the new model lives up to the Wrangler’s off-roading pedigree, the pickup will be offered with Command-Trac and Rock-Trac 4×4 systems, Dana 44 axles, Tru-Lock electric front and rear lockers, a Trac-Lok limited-slip differential, and electronic disconnecting sway bars for optimum wheel travel. There’s also 33-inch tyres on offer for the top model.

Inside, passengers will be treated to either a 7.0-inch or 8.4-inch Uconnect touch-screen media interface packed with Apple CarPlay and Android Auto. The screen will offer displays from a forward-facing camera on the top Rubicon variant.

We suspect an online debut is just around the corner now that the cat is out of the bag, with a public debut set for the LA show in just under two weeks.