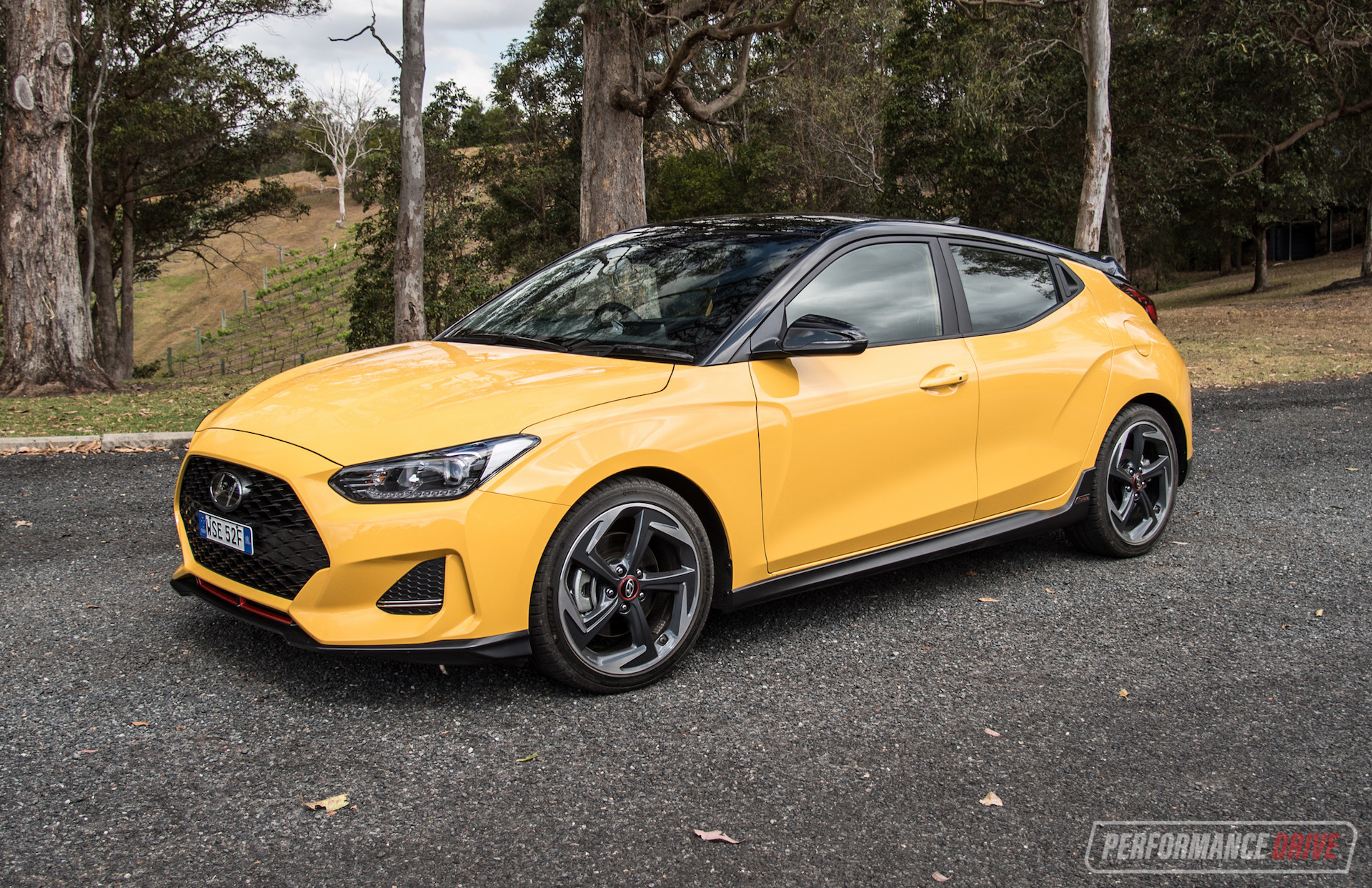 The Hyundai Veloster is back for its second generation. And what a perfect time to arrive, just as the entry sports car market is starting to look a little stale. 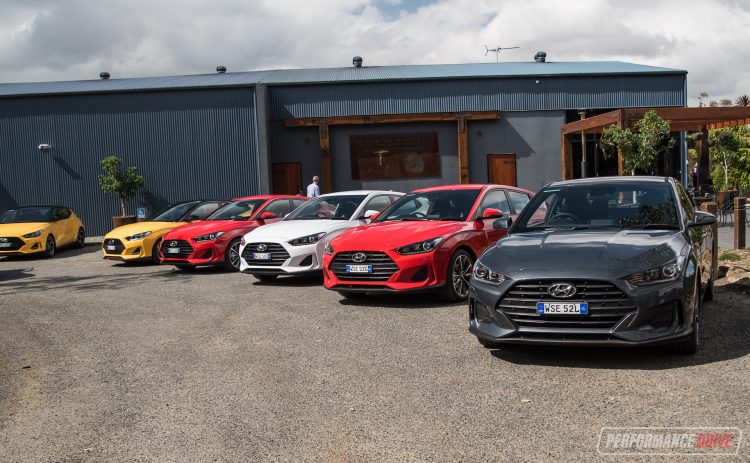 During 2018 the Veloster racked up just 425 sales. That’s nothing compared with six years ago. In its first year of sales in 2012, there were an incredible 4107 units sold. That figure has since been slowly trickling down. In other words, it’s time for a reboot.

Competing with the likes of the Toyota 86, Subaru BRZ and Mazda MX-5, the Veloster comes in as the freshest model. Although, the Ford Mustang and Renault Megane RS technically battle in the same field (according to FCAI), but they are considered more serious propositions and they are priced north of this quirky three-door.

Speaking of which, prices kick off from $29,490 for the base model manual. And yes, a manual is still being offered for all models – like a proper sports car. If you want some more poke, the Turbo version kicks off from $35,490, while the fully-kitted Turbo Premium starts from $38,990.

Prices have climbed from the original base price of $23,990 in 2012, but when you see how much equipment this new model comes with, and how much of an improved car it is, in every way, it all seems justified. 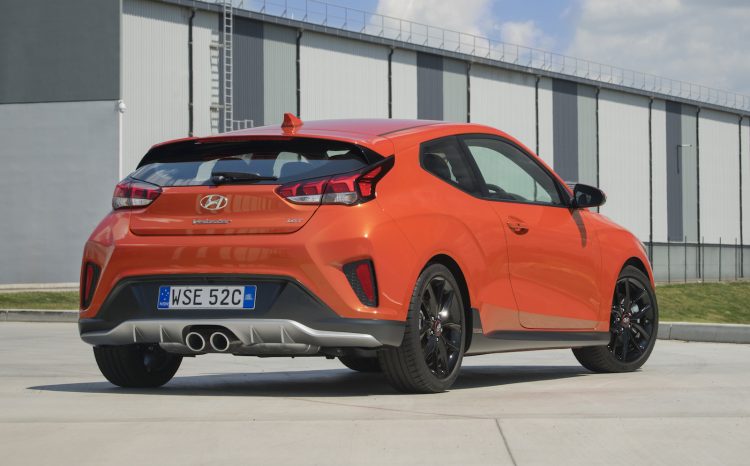 Hyundai describes the Veloster as a 2+1 door vehicle. That’s because on the passenger side there are two doors, but on the driver’s side there is just one. Why? Firstly, it’s something unique. But mostly it’s for practicality. The Veloster is pitched not only as a sports car, but Hyundai considers everything from the Mazda3 hatch to the Toyota C-HR as potential rivals.

And in that sense, the design is a blend of sports coupe, flamboyant SUV, and stylish practical hatchback. You can easily get humans to jump into the back thanks to the third door, while boot space isn’t as compromised as it is in traditional two-door coupes. Who knows how the weight balance all pans out though considering the driver’s door is actually longer than the front passenger door. We’re sure Hyundai is all across that. 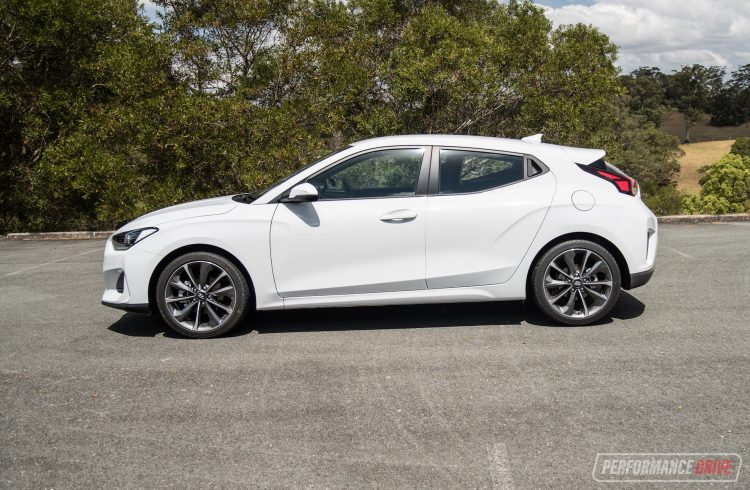 As you first walk up to the new Veloster you will be pleasantly impressed by its design. It looks good. It looks unique and modern, without being over the top in our opinion. We also think it has evolved beautifully from the original model’s design; you can tell it is a Veloster, but every panel and detail has that fresh smell to it.

And it’s the same story inside. This interior looks contemporary, with splashes of flair and technology thrown in. Particularly for the Turbo variant. It comes with red highlights as opposed to blue in the base non-turbo version. We especially like the new metallic-look buttons across the middle section of the dash, and the way they are indented. The volume and tuning knobs feel like quality items, too. 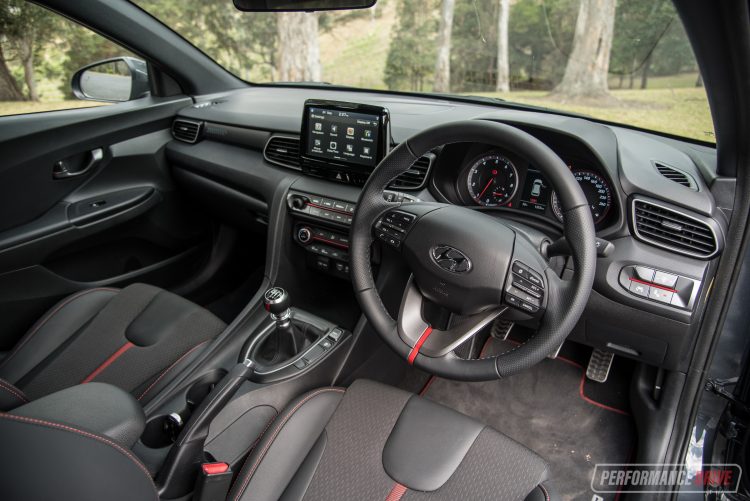 All models come with Hyundai’s latest touch-screen media interface as standard, measuring 7.0 inches for the non-turbo and 8.0 for the turbo. These feature Android Auto and Apple CarPlay connectivity, with the larger screen coming equipped with its own sat-nav, and a superior eight-speaker sound system over the standard six-speaker setup.

Hyundai is offering two versions of the Turbo model. There’s the standard, which features cloth seats and a body-coloured roof, and dark grey 18-inch alloy wheels. Or, there’s the Premium variant, which introduces a black contrast roof and A-pillar option, a large sunroof as standard, leather seats, and unique 18-inch machined alloy wheels. The Premium (not available on the 2.0 MPi) also comes with a wireless phone charger and head-up display. 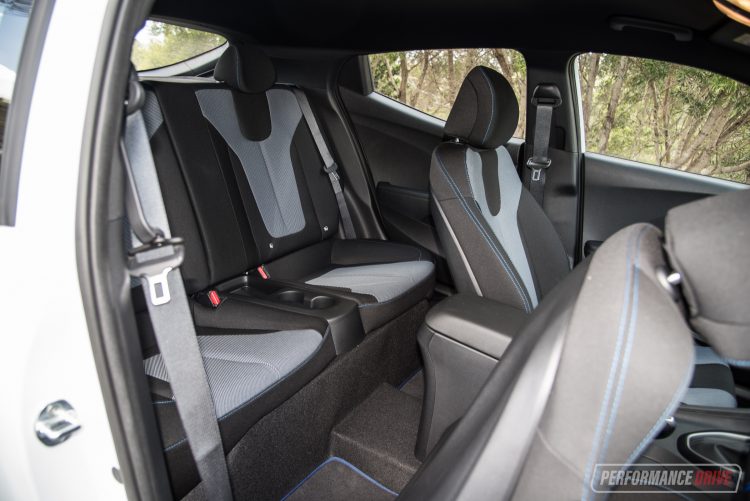 Passenger space is excellent for this class. Hyundai engineers have made some revisions to the overall dimensions, moving some key structures around a bit to improve ergonomics. For example, the third door opening is widened by 58mm. For the driver, the instrument cluster is raised by 10mm to improve its angle to the driver’s line of sight, and the seat itself is lowered by 5mm for a more hunkered down position. 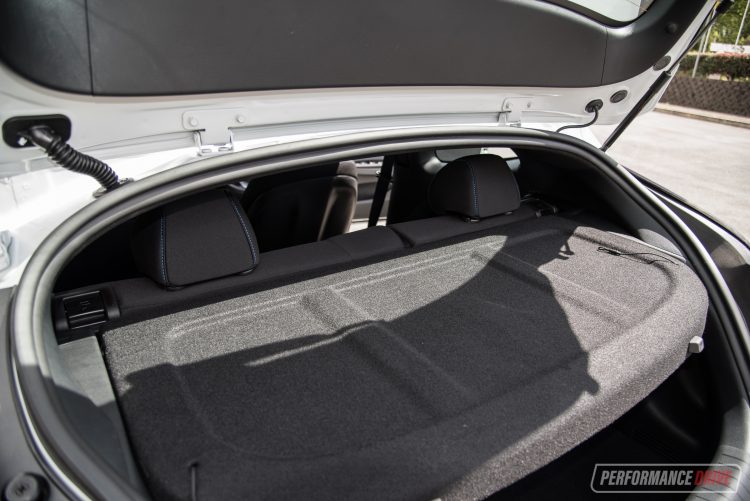 We really like the driving position now. It feels natural and sporty, which does go some way to increasing the sense of control and driver connection. But perhaps the biggest improvement is for the rear passengers. In the old model the hatch lid would close down right on top of the passengers’ heads. Hyundai has fixed this by stretching the roof back by 450mm. Now, the hatch lid closes regardless of how tall a rear passenger might be.

Boot space does suffer slightly as a result, dropping from 320L to 303L. Even so, it is still a very practical little car, with loads of storage options around, as well as cup holders, and a centre armrest box for the main console. 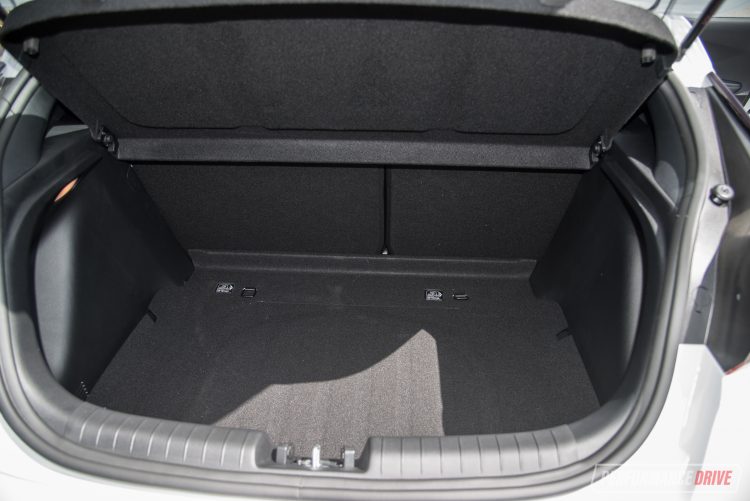 Hyundai has made some pretty big changes to the hardware for the 2020 Veloster. Replacing the old 1.6-litre naturally aspirated four-cylinder in the base model is an upgrade to a 2.0-litre unit. It produces 110kW and 180Nm (up 7kW/17Nm). This is great news for budget conscious buyers as it means you don’t necessarily have to fork out the big bucks to receive decent performance.

However, the larger capacity does mean fuel consumption is increased. For reference, the old base model 1.6 manual offered an official consumption average of 6.7L/100km, while the equivalent new model moves up to 7.0L/100km. The auto, which switches from a six-speed dual-clutch to a six-speed torque convertor, jumps from 6.6L/100km to 7.1L/100km. 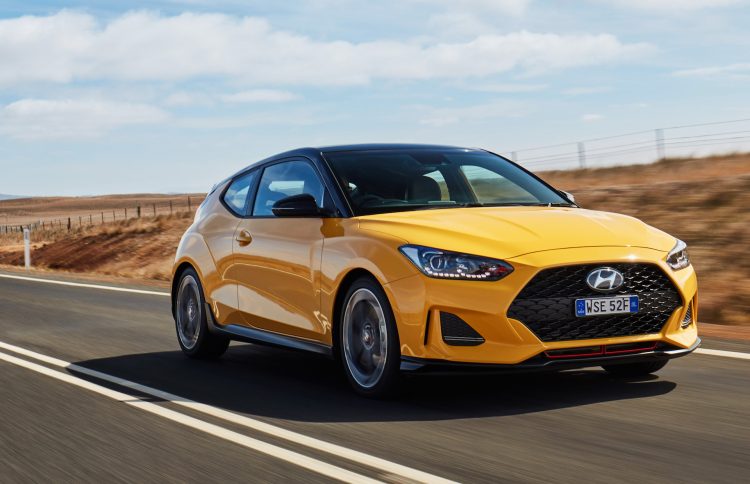 No major changes are made for the Turbo variant. However, some minor tweaks have introduced a new overboost function for the turbo, lifting torque from 265Nm to 275Nm. The Veloster is the only model within the Hyundai-Kia empire to receive this overboost kick for this 1.6 engine, although we suspect other applications of this 1.6 will probably get it soon as well. The same 150kW power output carries over.

Official fuel consumption figures for the manual turbo are unchanged from before, rated at 7.3L/100km. But the auto drops from 7.1 to  6.9L/100km on the combined cycle. Since we only tested these during the launch event (one day of driving), we didn’t take any notes on our tested figures as they would be quite unrealistic. 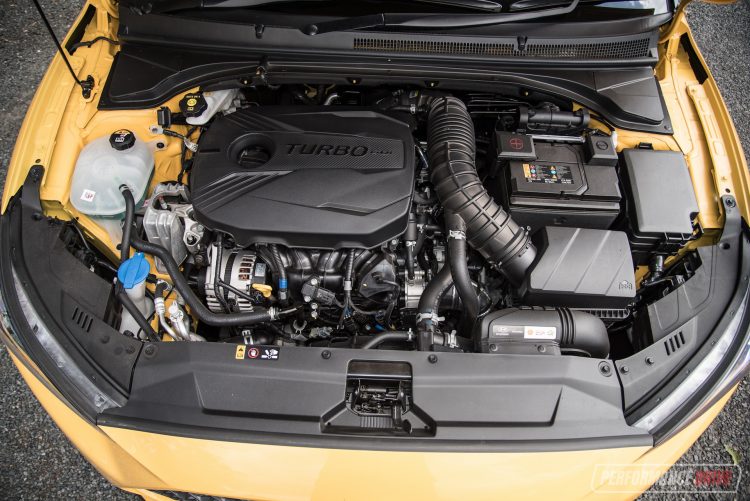 Is 150kW enough power for a ‘turbo sports car’? Considering the Veloster has never really been regarded as a proper hot hatch, rather, more a warm hatch, we think this amount of power seems about right. We were far away from our usual private road for performance testing during the launch event, but we did bring out Vbox Sport along for some ‘unofficial’ 0-100km/h tests.

What really helps in the area of fun though is the fact the 2020 Veloster is underpinned by a much more modern platform than the first-gen series. The platform is taken from the latest i30, and has helped trim the kerb weight by 10kg for the Turbo manual. The prime benefit of the new platform in our opinion is the switch to a multi-link rear end, replacing the old torsion beam arrangement. 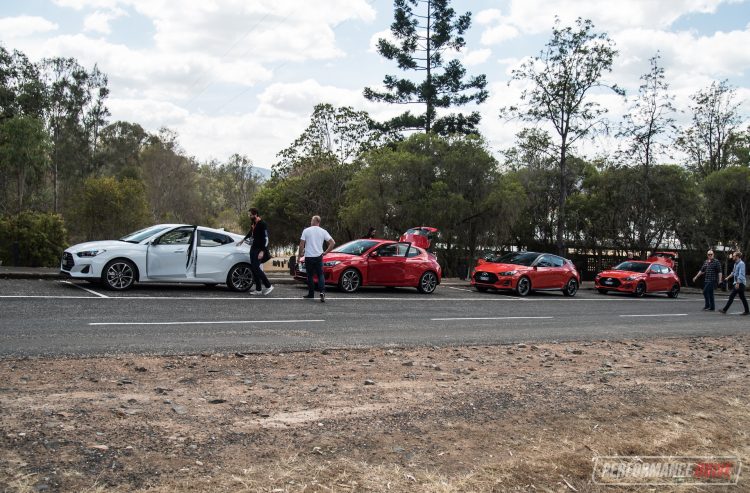 Hyundai’s local engineers have honed and perfected the suspension for Aussie conditions, so the ride control is taut and holds the body stiff, yet very absorbent and forgiving over mid-corner bumps. During the launch event, part of the driving route was in the hills to the west of Brisbane. Here there were some awesome switchbacks and cambered and off-camber bends. We pushed really hard in these conditions to see what the setup was all about.

We find the turn-in is committed although not overly sharp, despite a quicker steering rack being introduced for 2020. The steering feedback also feels significantly improved over the old setup, which felt numb. You can feel when the tyres are going to gradually let go, and thanks to a switch to Michelin Pilot Sport 3 tyres for the base model and Pilot Sport 4 for the Turbo, the grip threshold is properly impressive.

The amount of control and stability is also vastly improved over the previous model. And, actually, not just compared with the previous model. We think this is one of the best-balanced setups for this specific style of vehicle. You can smash over bumps right when you’re pulling high Gs around a corner and the platform won’t budge. It remains on track and deflects irritation. 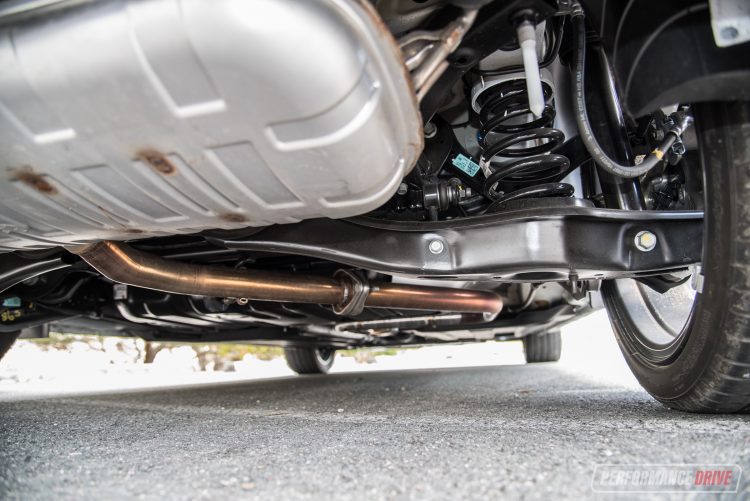 Hyundai says the new layout offers increased wheel stroke range during suspension compression, and the bump stops are thicker. This means the new Veloster is able to catch and absorb deeper bumps than before. There’s also optimised bushes and revised toe characteristics for the rear end, and Hyundai Australia went through 15 different front and 28 rear damper setups to find the perfect fit.

As a result, we think the 2020 Veloster handles wonderfully. The amount of grip, partly thanks to those new tyres, is quite amazing for this level of vehicle status. And the control and commitment when pushed to its limits should make it more than capable enough for most buyers. About the only minor suffering we experienced during our 2-3-hour test drive was with the brakes.

During a long downhill section of the drive route the pedal did start to feel a bit spongey for us and the pedal dropped a little, with a momentary drop in braking performance. Admittedly, we were pushing quite hard as mentioned. Once the brakes could take in some fresh air on the flat sections, they returned to normal as if nothing happened. We shouldn’t really mention this is a drawback however, as the Veloster isn’t specifically designed to be a full-on nutcase hot hatch – that’s what the i30 N is. 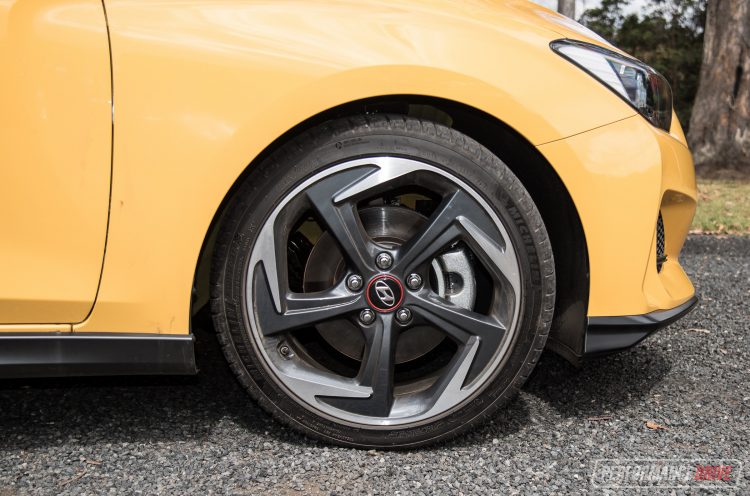 It’s quicker in a straight line and definitely more capable around bends. We think it looks superb and there are a wide variety of trim levels to suit a range of buyers’ needs. Various tweaks and all-out overhauls to the interior and packaging also mean it is more practical and better value than before. And finally Hyundai has done something about the engine sound in the Turbo model, so it no longer sounds like a Dyson.

Thanks to improvements in every single area, we suspect sales numbers will spike back up for the nameplate. Our pick is the top-spec Turbo Premium with the dual-clutch auto option. It’s surprisingly quick through a mountain road, and the contrast black roof gives it a really cool and distinctive look.