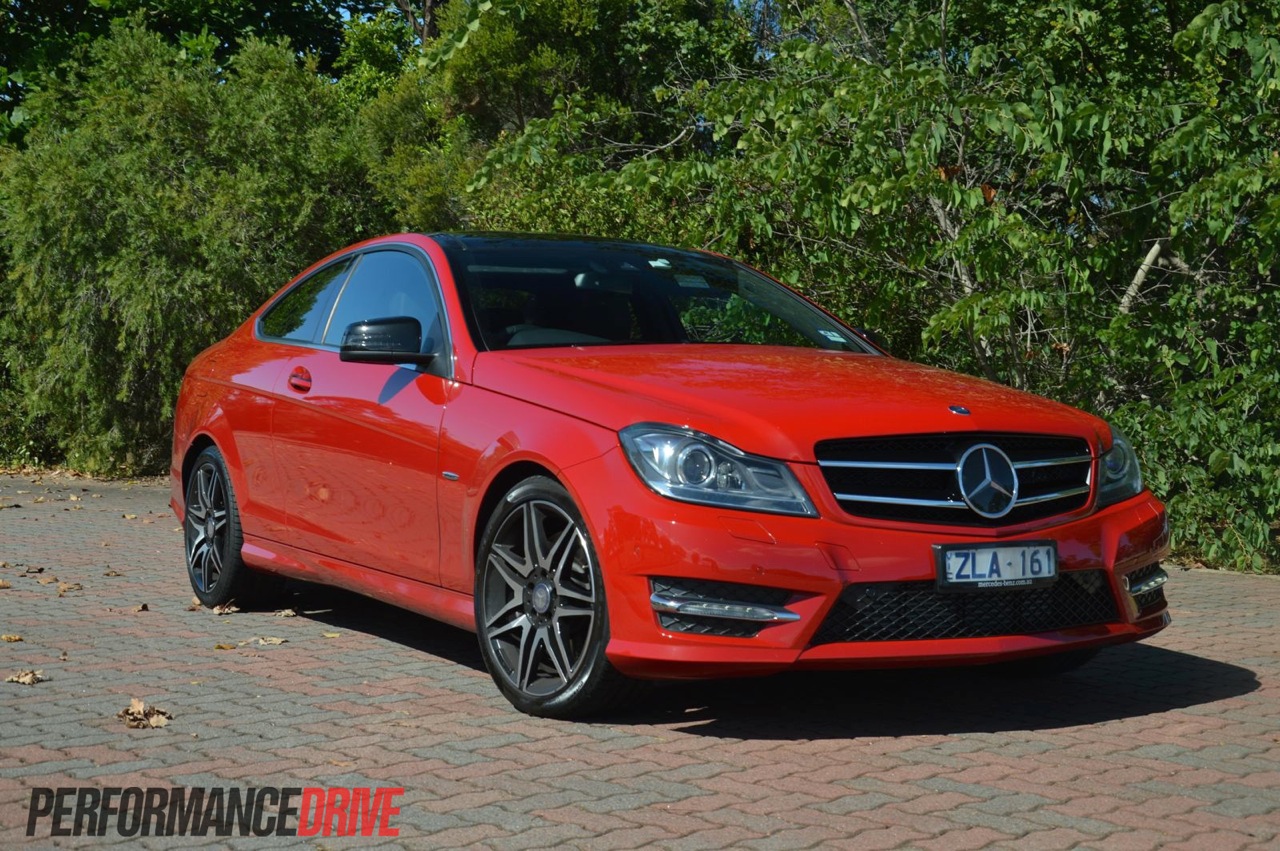 Upon initial inspection, the 2013 Mercedes-Benz C 250 Coupe Sport might seem like a bit of AMG tinsel scattered over an otherwise humdrum model. It’s not until you drive it that you realise it’s a genuine rear-wheel drive sports car in its own right. Just a few rungs down from the wild C 63 AMG then? 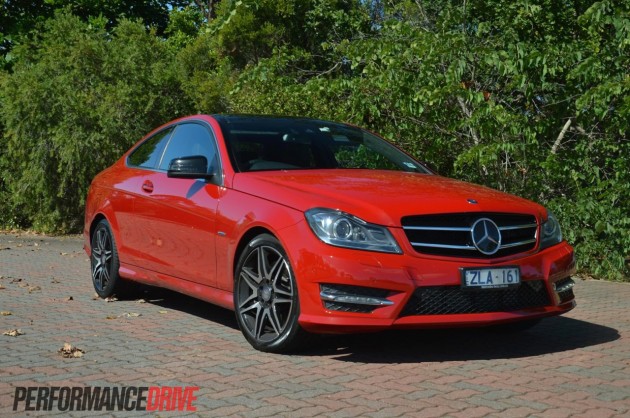 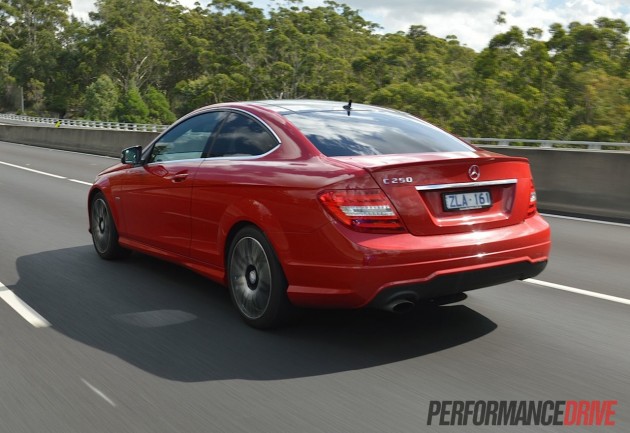 The C 250 Sport was introduced in Australia earlier this year. Although it’s not a dedicated AMG performance model, it is massaged by the in-house tuning division.

Both the engine and seven-speed 7G-TRONIC PLUS auto transmission are optimised to be more responsive as well. 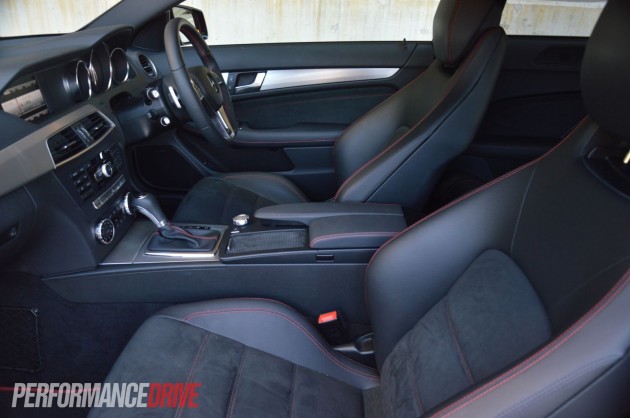 Inside, the Sport gets an array of sporty highlights to separate it from the regular C-Class, with the addition of proper hip-hugging AMG bucket seats, red stitching on various trimmings, rubber studded stainless steel pedals, and a set of striking red seat belts.

In other words, you are getting a lot of AMG-derived additives which more than spruce up the mid-spec Coupe.

Prices for the C 250 Coupe start at $70,400, which is considerably cheaper than its main German rivals, while the Sport package is an additional $8150 (all excluding on-road costs).

In the regular C-Class, the interior is dressed in a very much professional, business-like attire, with lots of black and polished metal, and an intelligent set of instruments to liaise with.

In the Sport, the same degree of intelligence is here only instead of wearing its usual business suit, it’s wearing a pair of joggers and a tracksuit. It feels like an authentic sports car.

From the moment you open the door you’re hit with those red seat belts. Then you sit right down inside the generously bolstered bucket seats, and look up to a perfect driving position. From that point on you just know it’s going to be a fun business meeting. 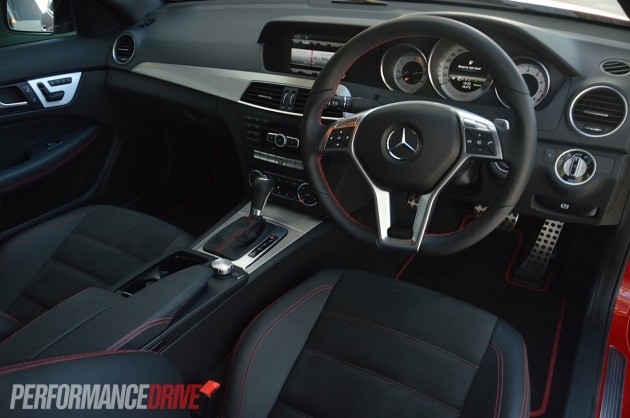 The three-spoke sports steering wheel comes with aluminium paddle shifters, which are placed at the ideal position – not too far away but not too close – while the sophisticated yet subtle three-dial instrument cluster tenuously peers at you with clear and precise readouts.

The cluster itself also incorporates a 4.5-inch TFT LCD digital colour display, showing data for the cruise control and menus for the trip information and driver safety assist settings.

Looking at this display has a calming effect for some reason. The crystal clear graphics are predominately silver and grey with soft shadows giving it a three dimensional look. For those who haven’t experienced a ‘TFT LCD’ screen, it’s basically a step up from normal liquid crystal displays (LCD), called thin-film-transistor LCD. Essentially, it’s all about super-fine detail; it certainly adds to the prestigious and smart in-car theme. 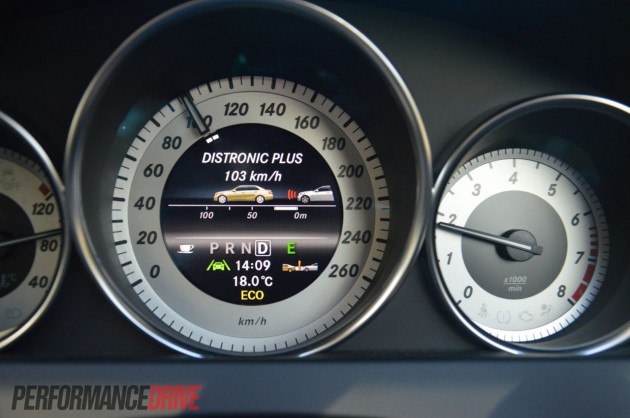 On the centre dash is another seven-inch TFT LCD display. This one is for the full multimedia infrastructure, which, on all C 250 Coupe models, includes a HDD satellite navigation system, a 10GB music register, internet connectivity capabilities, and support for various external devices such as Bluetooth streaming and an SD card reader.

It’s all controlled by a rotary ‘mouse’ button down near the gear level. It’s easy and intuitive to operate, so long as you’re moderately computer literate.

Optionally, Mercedes-Benz offers a Dolby Digital Harmon Kardon surround sound system with Logic 7 and DTS technology ($1640). This would be a must for those who enjoy their music loud and clear. 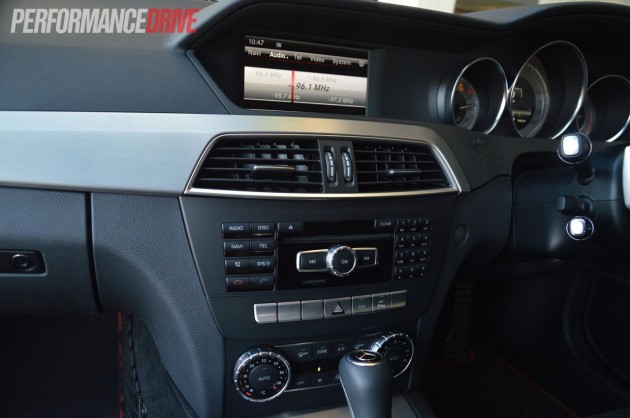 Strangely, for a top-line vehicle, our test C 250 did emit a number of interior creaks and rattles, particularly around the parcel shelf area. This may be isolated to this exact car. The noises were rather annoying and cheap/nasty-sounding.

Aside from this, the cabin offers an uncluttered, succinct, and high quality feel which is also quite comfortable. The sports seats aren’t as thick and puffy as the regular C-Class items, and therefor could spike up some issues on very long journeys, however, we have no complaints here. The interior is a very nice place to be, with a dash of excitement thrown in.

In the back, all C-Class Coupes offer 450 litres of boot space. The volume is about on par with the main German rivals; the BMW 3 Series coupe (430 litres) and the Audi A5 coupe (455 litres). 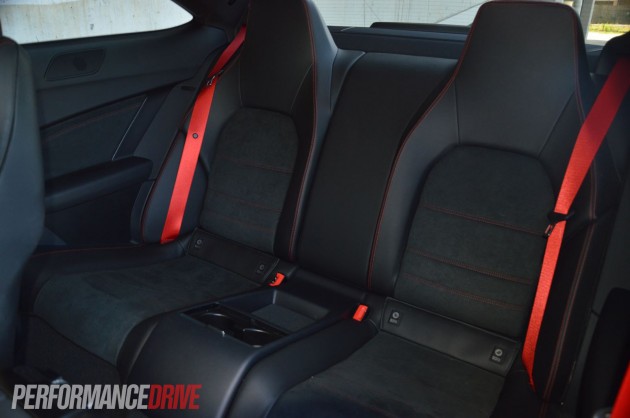 With the AMG bodykit, including a bespoke front bumper bar with C 63 AMG-esque vents and grilles, chunkier side sills, and a neat lip spoiler on the boot, the Sport package adds a touch of exclusivity to the two-door C-Class.

The attractive add-ons not only look good, they also assist with keeping the car as aerodynamically efficient as possible. The C 250 Coupe has a drag co-efficient of just 0.26, which easily betters the Audi A5’s attitude towards cutting through the air (0.30), and is more slippery than the current BMW 3 Series coupe (0.29) as well. This not only helps with performance but also fuel economy.

With Mercedes-Benz often being at the forefront of automotive safety, it comes as no surprise Australia’s ANCAP has given the entire C-Class range a full five star rating. In previous tests it scored 36.16 out of 37.

Standard highlights include a plethora of airbags, 11 to be exact, stability and traction control, an active bonnet for pedestrian safety, a brake drying function for wet conditions, a crash-responsive pedal cluster which retracts the pedals out of harm’s way in the event of a collision, an LED centre brake light, and NECK-PRO whiplash protection headrests.

Some of these are becoming stable items these days, but it is easy to point out the further attention to detail Mercedes-Benz has gone to here. 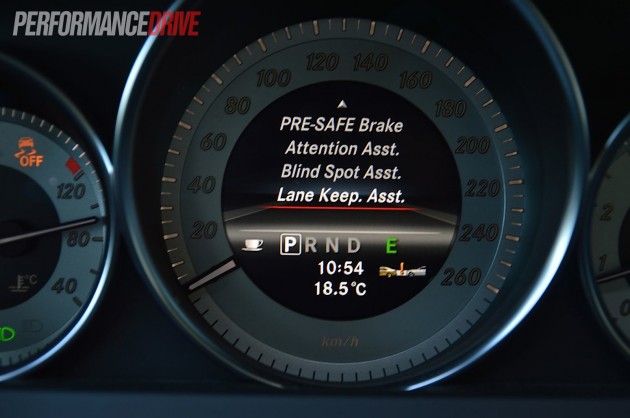 Exclusive to the Sport model is a revised engine computer and mapping for more enthusiastic throttle response. Can you feel it? You can indeed. In S mode the throttle is snappier than a Jack Russel, to the point where it’s actually overly sensitive, at least until you get used to it. When you do, and when you take it out for a vigorous drive, you can adjust the behaviour of the car with such minute adjustments of the throttle.

It’s a crisp setup and it kind of reminds us of an old-school naturally aspirated engine with carburetors. The response is instant and the induction noise is very throaty too.

Speaking of which, the Sport package comes with a sports exhaust system. The system incorporates a sound generator to really amplify the rorty four-cylinder soundtrack. Check out our video above to hear it for yourself. 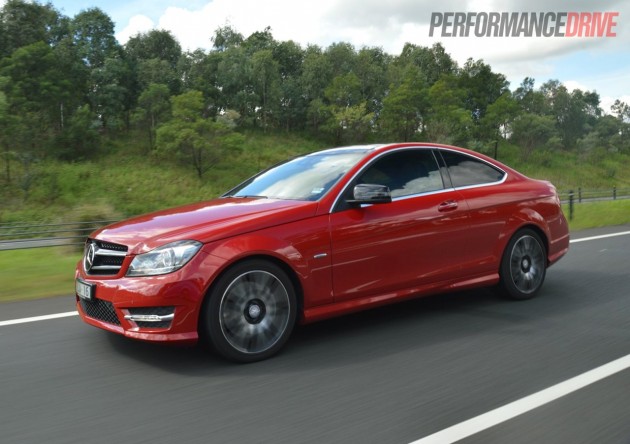 Driving dynamics are at ace levels in the C 250 Sport. We were surprised by just how lightweight the car feels. It tips the scales at 1550kg, which is heavier than the BMW rival (325i, 1450kg) and matches the Audi A5 2.0 TFSI. But you wouldn’t notice it. It actually feels like you’re driving a 1000-1100kg car. It’s super-responsive and quick to change directions, if you want it to.

Part of the eager handling is down to the revised steering box which is made quicker in the Sport. It’s pin-sharp, precise, and brings a level communication that really does stand out in this class. Dare we said it, the steering feels as engaging and more enthusiastic than the system offered in the 3 Series.

The variable ratio mechanism doesn’t seem as refined as the one in the 3 Series though, but it is miles ahead of the system used in the all-wheel drive A5, both in terms of feedback and precision. 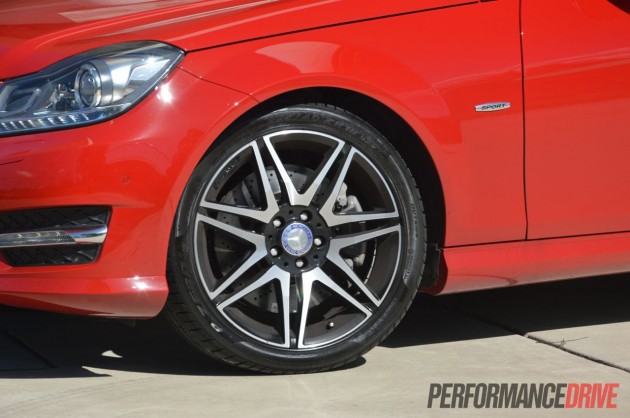 It’s a joy to throw down a series of fast tempo switchbacks. The chassis feels extremely rigid yet the dynamics feel alive and active. Again, it reminds us of an old-school lightweight, such as a Toyota AE86 Sprinter. You can turn in, feed in the throttle and get a bit of oversteer going, and it responds immediately, giving you the direct feedback of a mechanical, analogue-like piece of equipment. And this is despite the cornucopia of electrical systems working on your side beneath the surface of it all.

The engine sounds ultra-zesty, giving off a distinct parp between upshifts. It doesn’t feel impressively powerful, but it does provide good mid-range punch and a linear power curve.

The power (150kW) peaks at 5500rpm, which means the only point in revving it beyond that and onto 6000rpm is for pure enjoyment.

We timed 0-100km/h in 7.2 seconds. This is the same time the factory quotes. As we always say around the office, any car that can do under 8.0 seconds is normally capable of providing respectable and fun levels of thrill, especially once you’re up and pressing on in second and third gears. 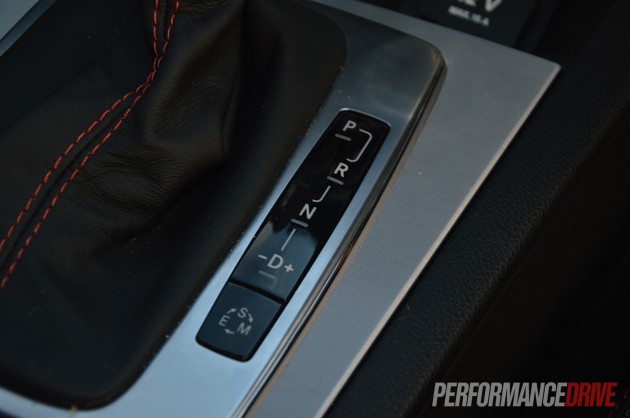 Despite trying all three different driver settings for the transmission – economical, sport, and manual – and the obligatory ‘eco’ button, we couldn’t get near the official average fuel economy rating of 6.9L/100km.

Instead, around 8.5-9.0L/100km seems more on the money for real-world conditions. It’s not that it is thirsty, per se, we feel the engine’s capacity of 1.8 litres may be a little too small for the vehicle weight.

If you’re only ever driving on the highway, sure, the engine is more than adequate (strictly in terms of economy), however, in stop-start traffic and in slower speed areas, the engine seems like it is having to work a little too hard and it can’t quite keep up ‘effortless’ momentum.

You often find yourself giving the throttle a good poking to keep up with hasty traffic flow. This, we feel, kind of defeats the purpose of being a small economical engine as opposed to a fractionally larger unit, which could probably carry on easier – and more efficiently – with more usable torque. 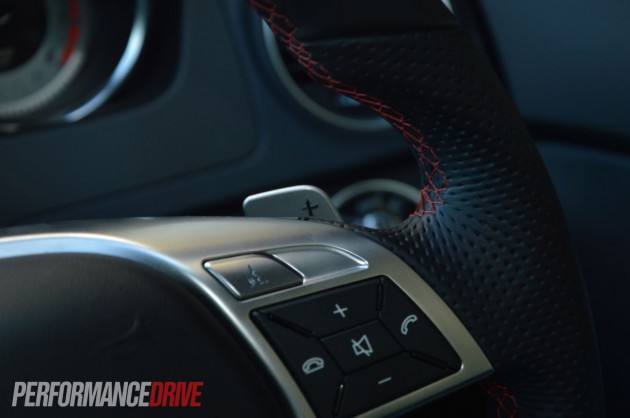 Even as a step down from the snarling C 63 AMG Coupe, the C 250 Sport easily gains admission into the market as an unadulterated sports car as far as we’re concerned; it’s not simply a regular model garnished with ‘sporty’ highlights. From the moment you drive it you can immediately establish a rapport with its driving character and appreciate the AMG engineering.

From the tweaked steering, the fine-tuned and brilliant sports suspension, to the energetic in-car appointments, ticking the Sport package box is a no-brainer option in our opinion. It sounds great, handles superbly, and, it’s cheaper than its main rivals by around $5000.

The only negatives that we can point out are the interior rattles and the fuel economy, but both of these could be subject to the specific test car and the (joy-filled) way that we were driving it. 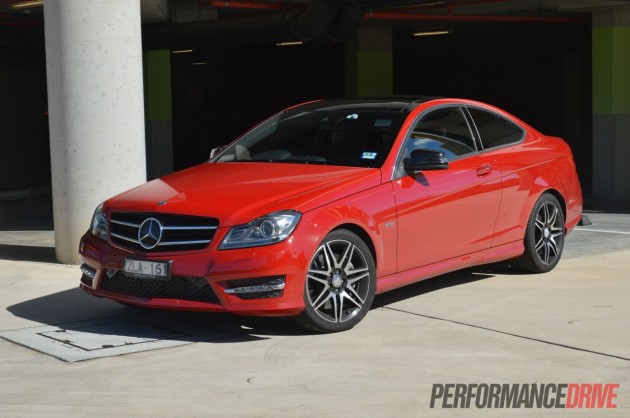