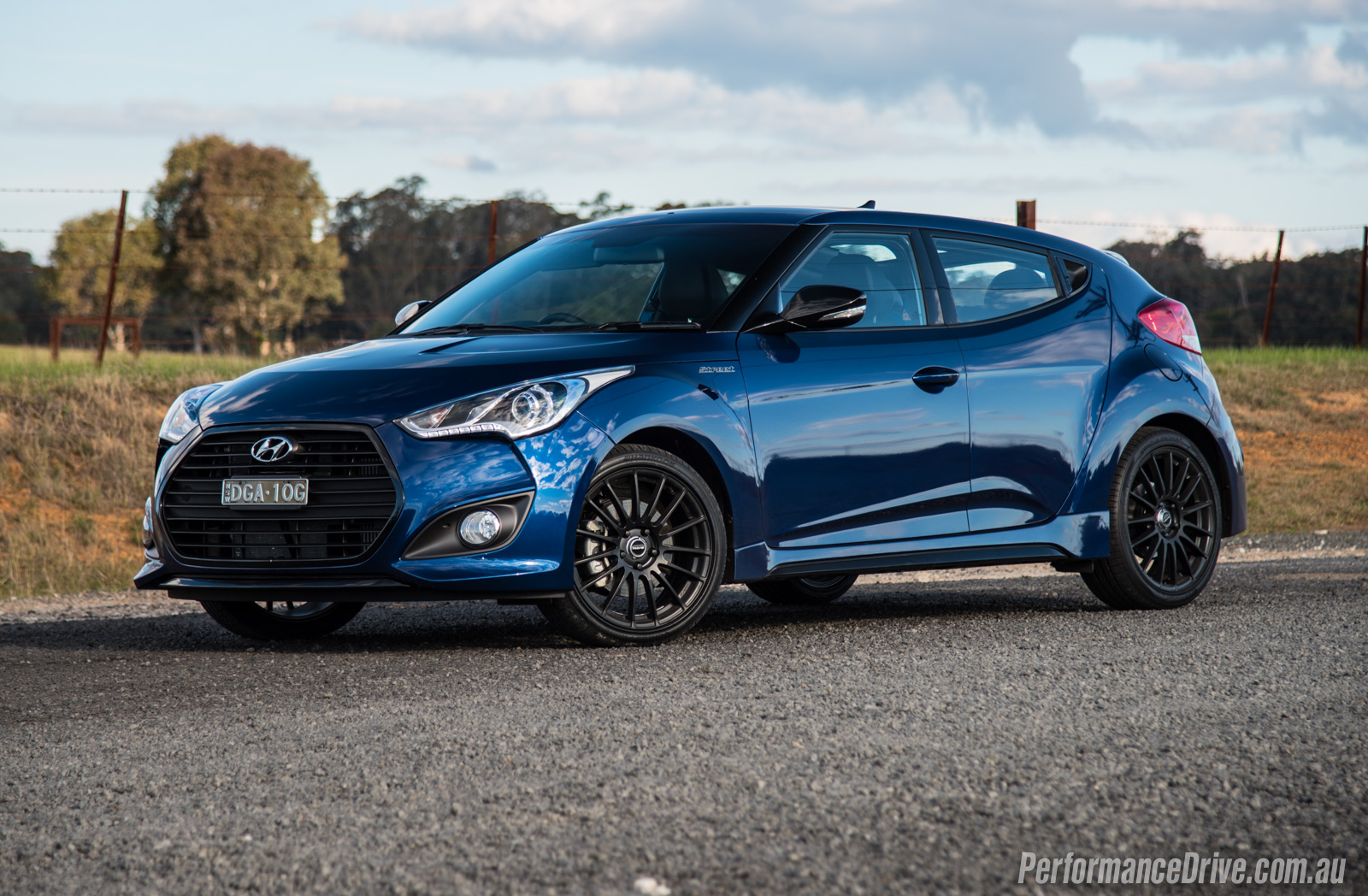 Since its initial launch back in 2010, the Veloster has been adored by fans and sports car enthusiasts. It is starting to age now with merely a Series II update in six years. To give the quirky four-door refreshing appeal Hyundai Australia has launched the Street Turbo Edition. 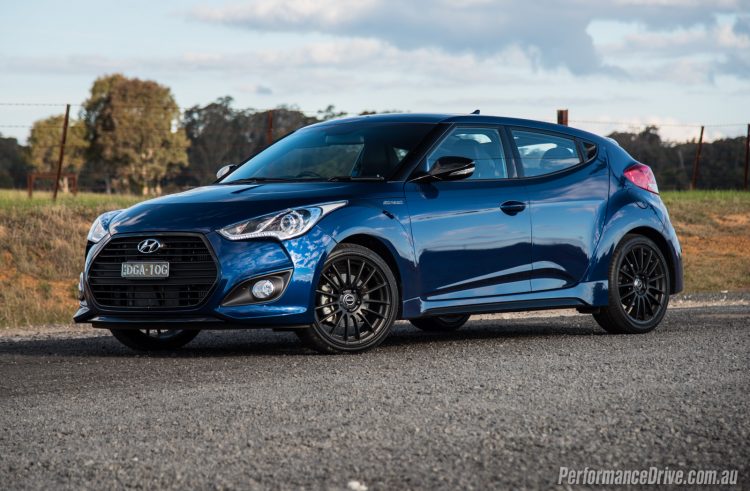 Based on the Series II SR Turbo, the Street Turbo Edition builds on the Veloster’s funky design while boosting its street cred via some unique add-ons and trimmings. Just 200 are on sale, and the last time we checked, there were only around half left.

The Street pack adds $3000 worth of extras while only asking for an additional $1000 above the SR Turbo +’s starting price. This means prices kick off from $35,750 for this six-speed manual version, and from $38,250 for the seven-speed dual-clutch auto version (excludes on-roads).

Last year Hyundai Australia sold a whopping 2685 examples of the Veloster, giving it 19.2 per cent market share and second place in the class, only behind the Toyota 86. 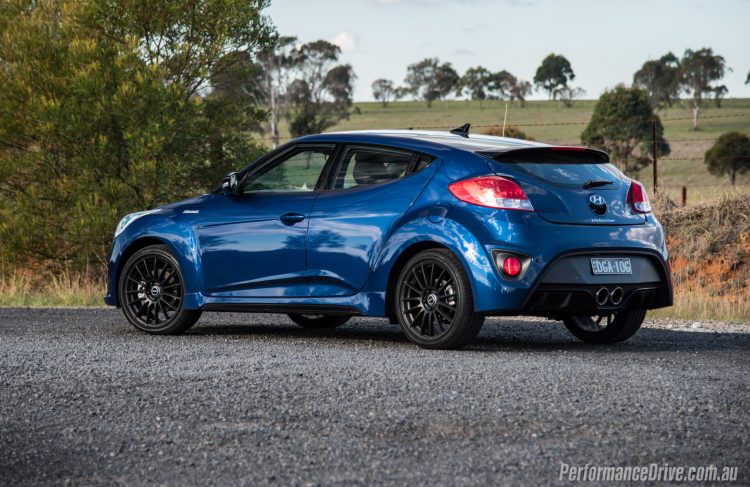 So, what does the Street Turbo bring exactly? Perhaps most importantly to us sports car fans, the engine. It’s untouched. The 1.6-litre turbo four-cylinder develops 150kW and 265Nm. Up against its arch rival, the Toyota 86, Hyundai drivers still enjoy a 3kW and 60Nm prepotency. Power is sent to the front wheels via an open differential.

Instead of all-out performance, the Street pack is more about making the Veloster more attractive, especially on the… street. It features 18-inch RAYS ‘Gram Light’ alloy wheels in the fashionable black colour scheme, along with matching black side skirts, window and grille surrounds, side mirrors, and rear spoiler and diffuser. The body is coated in an exclusive Dazzling Blue Mica paint, and HID Xenon headlights are fitted as standard.

Does it all work? We think it does. The Veloster is a great-looking hatch in our opinion, with muscular tones around the wheels, a pouncing front end, and a cool rear diffuser with twin cannon exhausts shooting through. About the only negative thing to say about the design is that it has been around for a while now and some of the intrigue might be gone. Of course, the Street edition stands out as something slightly unique in that respect. 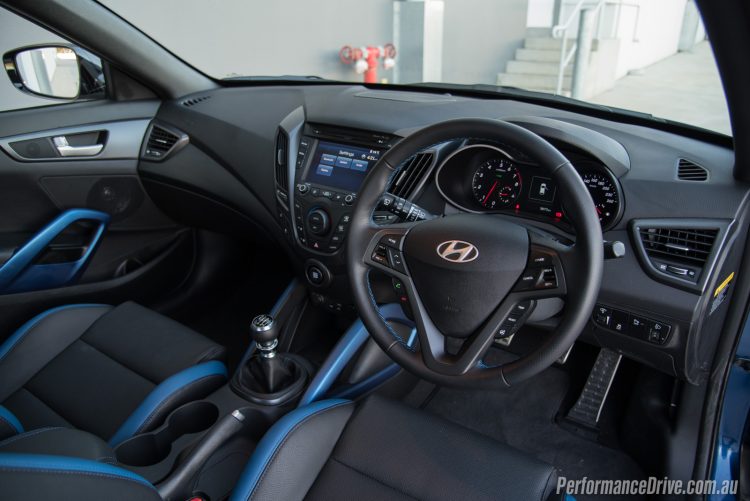 For the interior Hyundai has equipped the special edition with unique ‘Turbo Sport Blue’ seats with blue sections. Aside from these, the Veloster cabin remains a relatively uninteresting concoction of dark grey plastic, and more dark grey plastic. We’re not of a fan of the triangular door pulls with their sharp edges, presumably from when the plastic mould was pressed. We’re also not a fan of the weight of the long doors.

On the dash is Hyundai’s latest touch-screen interface with sat-nav and Apple CarPlay connectivity. It’s a pretty good system, and quite user-friendly. The touch operation is responsive albeit with some loading delays when jumping into deeper menus or programs. Throw it into reverse gear and the screen doubles as a display for the rear camera. 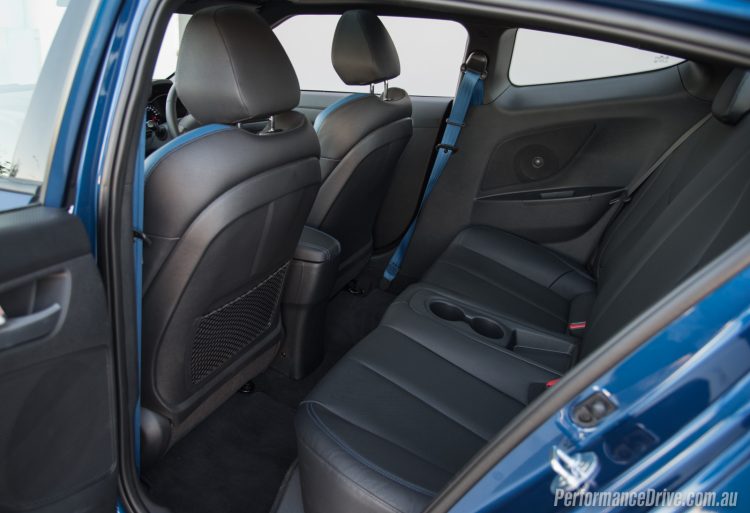 Accommodation and space is good for the class, with a low centre console providing a clean and clutter-free environment. We couldn’t quite find the perfect driving position but it’s going to depend on an individual’s stature and preference. As for the rear seats? They are actually usable, even for adults – something unheard of in this segment. There’s enough ceiling clearance for your head and legroom is half-decent, at least for shorter journeys.

The Veloster might be best-known for its magical third door; on the driver’s side there’s one door but on the passenger side there’s a front door and a small rear door. Interesting it might be, but then you take a look inside and there’s only two seats in the back, which we find perplexing. This is meant to be a practical sports car isn’t it? Cargo space is rated at 320 litres, which is about 50L less than the average small hatch such as the VW Golf, but about 102L more than what arch nemesis Toyota 86 offers.

Despite there being no power increase for the Street edition, the Veloster SR Turbo is a reasonable performer. Peak torque, at 265Nm, is available from 1750rpm and holds up to 4500rpm. This means it is a versatile engine and quite capable of surging up long steep hills, even with a bunch of fatties on board.

As a sports car though, the engine sound inside the cabin isn’t appealing enough in our opinion. It drearily whirs its way up the rev range, sounding about as appealing as a Dyson on an early hungover morning. There’s hardly any bass or presence about it. Being a turbo engine does inherently quieten things down but it would be nice to have a crackle and pop thrown in for fun, just like the cheaper Renault Clio R.S. and Volkswagen Polo GTI.

Aural pleasure does contribute to the driving enjoyment we think, especially for a sports car. And the rest of the driving experience doesn’t help. There’s nothing really special about the steering despite being sharped up by engineers in Australia. Hyundai Australia also revised the damper settings for the Street. Even with these changes, the steering remains numb and generic in our opinion, unlike in the aforementioned rivals. There’s no limited-slip differential at the front axle either, which means if you really give it some in the bends you’ll be seeing that 265Nm of torque being turned into tyre dust.

Road-holding is great, however. It’s able to rail around corners with little body roll and it possesses good stability, in turn, translating to confidence for the driver. Again though, the steering doesn’t convey much so it’s difficult to feel like an integral part of the drive, but at least you know it isn’t going to throw you any surprises.

It terms of measurable performance, we timed 0-100km/h in 7.29 seconds, which is quicker than the Toyota 86, but well behind the Clio R.S. and Polo GTI. 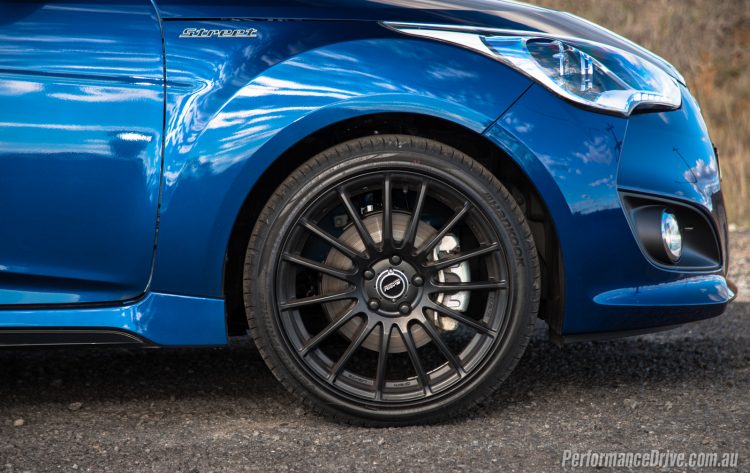 Our biggest problem with this car, is not really the car. It’s the rivals. For this money you could buy a Ford Fiesta ST, Mazda MX-5, Renault Clio R.S., Peugeot 208 GTi, Toyota 86, or a Volkswagen Polo GTI. If you can spare an extra $3000 the legendary Subaru WRX comes into the equation too (from $38,990).

We don’t mean to be criticising the Veloster for the sake of it, but at this price there are some very rewarding and exciting rivals around as you can see. And most of these mentioned are more affordable. For the Hyundai fans though the Street Turbo edition is an attractive proposition and it certainly stands out against other Velosters. You better get in quick before they’re all sold.

CONS:
– Plastic monotone interior (aside from blue highlights)
– Boring steering and engine sound
– Not as competent as rivals in the bends
– Only two seats in the back