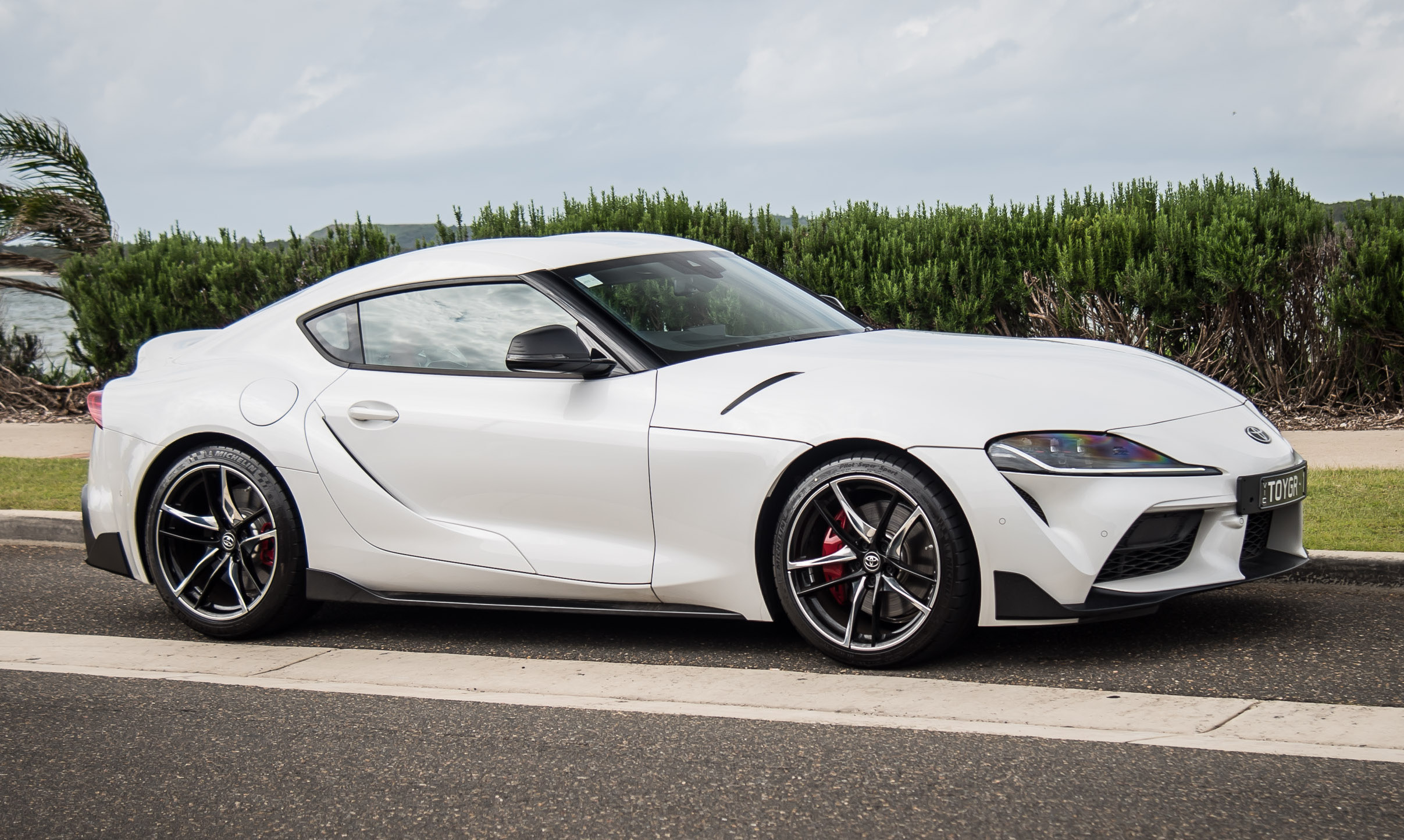 A sweet-sounding inline six with more than enough power, a sick two-door coupe design, and superb rear-wheel drive handling. What more could any sports car driver want? On paper the Toyota GR Supra ticks all the boxes. How is it on tarmac, though? Let’s check it out. We’ve already tested the entry GT variant (more in-depth review of that here), so for this test we’re just checking out the flagship GTS variant to see if it’s worth stepping up to. We’ve put together one of our big detailed POV video reviews for you as well (see further down).

In Australia there are just the two variants (GT and GTS), and you could almost describe them both as the flagship. Overseas there is a 2.0L turbo four-cylinder option and other trim levels that provide further distinction, but here the GT and GTS are quite similar and come well equipped with luxuries and features. Prices start from $84,900 for the GT and from $94,900 for the GTS (excluding on-road costs). So, what extra spec does the GTS come with? It’s not an exhaustive list. The GTS simply adds sports pedals, a premium 12-speaker JBL sound system over the GT’s 10-speaker setup, head-up display, and a set of 19-inch alloy wheels wearing 255/35 front and 275/35 rear Michelin Pilot Super Sport tyres (GT has 18s).

As standard both variants come with a BMW-based media interface which is controlled by an iDrive-like rotary dial and button system on the centre console. It does seem like a slightly pared-down version of BMW’s setup, and the screen looks small and angled somewhat to the passenger rather than the driver. We notice some menus and functions are stripped compared with BMW’s 6.0 operating system on which it is based, such as configurable driving modes, and there are some new menus such as Vehicle Settings which aren’t found in BMW’s system. You can have some fun checking out the real-time ‘sport displays’ which show power and torque levels, and the interface packs sat-nav, a rear-view camera, and digital radio as standard. Dual-zone climate control is also standard, and you have BMW’s traditional preset buttons spread neatly across the mid section of the dash. These can be programmed to do almost anything, such as call your mum, select a favourite radio station, or even provide a shortcut to one of the menus.

So, what’s it like to live with? Well, the cabin does feel very intimate and cosy. In some ways, the cabin can seem more confined than the Toyota 86 little brother. We think a lot of this has to do with the chunky fixture which connects the dash and console. This buttress really needs to go on the passenger side in our opinion as that would wrap-around more consistently with the driver – and that’s how the last Supra was designed. The driving position is nothing but spot-on, and there is plenty of adjustment available from the steering column and seat to ensure it satisfies most shapes and sizes. A lack of general storage space in the cabin does detract from its overall grand touring capability, particularly if you’ve always regarded the Supra as a bit of a grand touring vehicle.

Two cup holders take up most of the central arm rest area, with only a square-shaped tray right at the back of the console and a wireless phone charger cradle at the very front. There are no bottle holders in the doors and no centre console storage box. Boot space is rated at 290 litres, which isn’t great but it is okay for light shopping duties and weekends away. At this point we should probably point out a fact that you probably already know; the GR Supra is based on BMW’s CLAR platform and shares components with the current BMW Z4. It’s also manufactured at the same Magna-Steyr facility in Austria. Many Toyota fans have been up in arms over this partnership, with cynics trying to negatively label it as a badge-engineered vehicle. A ‘BMW with a Toyota badge’, for example. Well, whatever you want to label it this thing is an absolute blast to drive.

Power comes from BMW’s renowned and long-evolved 3.0-litre inline-six turbo engine. Codenamed, in its current form, the B58, it is packaged together with all the fruit. It runs a high compression ratio of 11.0:1 yet it uses a twin-vein turbocharger to pressurise the intake. There’s also twin cams with variable valve timing, direct injection, and a clever water-to-air intercooler which is positioned within the intake plenum to shorten the intake travel distance and improve response. The B58 was awarded in Ward’s 10 Best Engines list in 2016. And we can see why. On full throttle you have 250kW to play with, reached at 6500rpm (7000rpm redline), while a nice and meaty 500Nm of torque is available from just 1600rpm and held up until 4500rpm. It is such a flexible engine. You don’t need to constantly change down gears to enjoy optimum performance. You can keep it revving high if you want to, and the hairs on the back of your neck will shimmer to the six-cylinder sing, but if you’d rather remain subtle you can instead just lean on the throttle in higher gears for a super-impressive surge of low- to -mid-range pull.

We didn’t bother doing our full performance testing with this one but we did do a 0-100km/h run with the Vbox Sport just to see (shown in the video below at around the 22:00 mark). It did the sprint in 4.38 seconds. Looking back at our times that we got in the GT (0-100km/h video of GT variant also shown further down), this is the exact same time we achieved, believe it or not. We’d expect the GTS to be slightly heavier, even just from having two extra speakers, but according to Redbook specs both have a tare weight of 1463kg. Through corners, turn-in is really sharp and precise, and actually a little too eager as you first get used to it, with excellent front end grip helping to quash any chances of understeer. Although the communication fed back through the wheel isn’t as pure as traditional sports cars, it is adequate for a modern sports car and one that uses an electric-based power assist system.

We actually prefer the ride and overall suspension tune on the Supra compared with the Z4 M40i’s setting. On regular Australian roads anyway. There is decent suspension compression range so it can soak up shuddering bitumen and big bumps that you inevitably come across on country roads.

Toyota provides active dampers with two different settings; normal and sport. The sport setting is activated when you hit the sport button, which puts the powertrain into an energetic and characterful mood. Some artificial engine sound is also pumped through the speakers more noticeably in sport mode.

We didn’t notice a huge difference between the two suspension settings except when travelling on ordinary back roads. It seems the sport setting picks up more of the finer bumps and road imperfections, with mild crashing noise and abruption experienced. In normal mode it is really well balanced between comfort, agility, while maintaining body tension. Should you go for the GT or GTS? We really don’t see the point in going for the GTS. For that extra 10 grand you get two more speakers, sporty pedals, and some 19-inch wheels instead of 18s, as well as head-up display. But with the savings you’d take by opting for the GT, you could go out and buy an even better stereo and probably pick up some 20s if you wanted to.

What we mean to say though is the new GR Supra is a fantastic, modern, and very enjoyable driver’s car, irrespective of GT or GTS trim level. We think Toyota has nailed the design as it both rekindles plenty of the traditional Supra form but blends in a lot of future-proof themes. And although the underpinnings and engine are from a BMW, the performance and handling is superb.

The Supra is also up to $30,000 more affordable than the Z4 M40i. So you’re basically getting a BMW for a Toyota price, while covered by Toyota’s five-year warranty. Sounds like a bloody good deal to us.