Unfortunately, we were unable to attend the 2012 SEMA Show to bring you live coverage. However, we do have access to a range of images that we can share with you so we can all pretend we were there. Here’s some of the highlights. 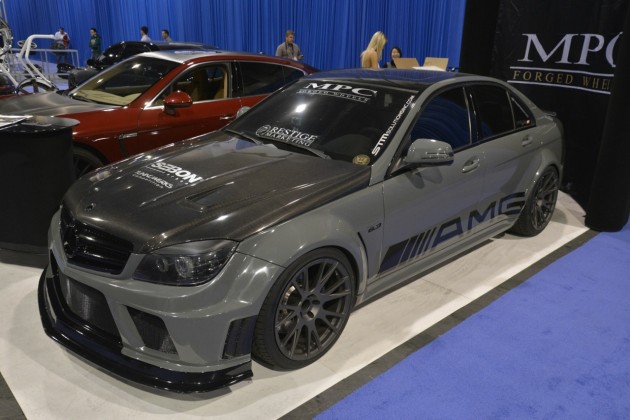 The SEMA Show is an annual event that takes place in Las Vegas, USA. It is regarded as the biggest aftermarket event in the automotive industry, with exhibitors coming from all parts of the world to show off their latest products.

The first car we noticed is this MPC Forged Wheels Mercedes-Benz C 63 AMG (above). It features a set of slightly dished lightweight MPC forged alloy wheels, as well as an aggressive and very tasteful bodykit with a low front spoiler and a full carbon fibre vented bonnet. 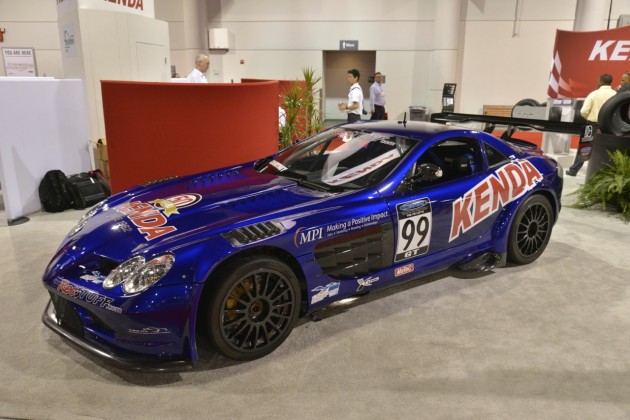 While we’re talking about Mercedes-Benz, this SLR McLaren also stands out. The supercharged V8 supercar is already stunning enough to attract plenty of attention in standard trim, let alone a modified one. This Kenda version features new wheels, new additions to the bodykit including interesting wings just in front of the rear wheels, as well as a deep blue colour scheme. 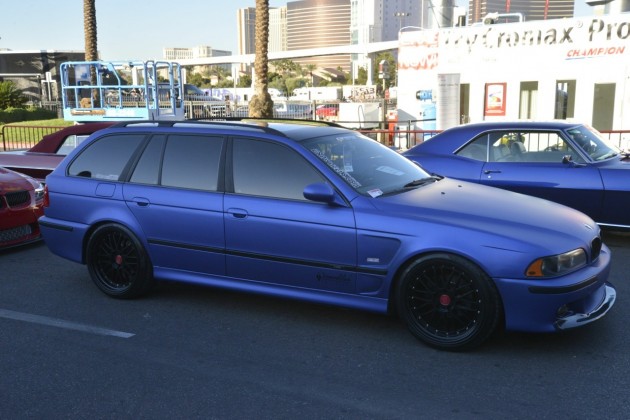 As for BMW, there were a few interesting creations by the looks of it, including an old-school E39 BMW M5 wagon. This model M5 was only ever introduced in Australia in sedan format, featuring a 5.0-litre naturally aspirated high-revving V8 producing 298kW. A wagon version would be very cool indeed. 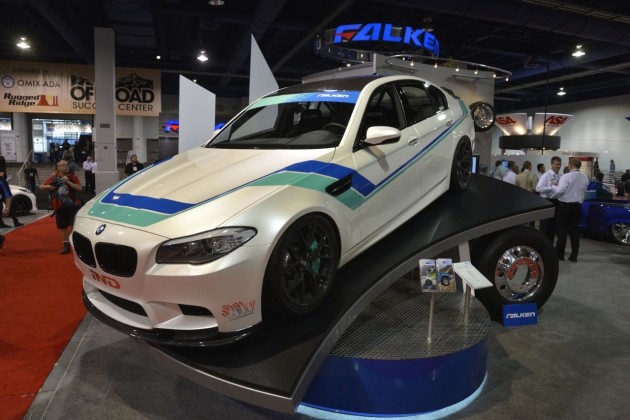 Falken tyres also had a current model F10 2012 BMW M5 (review) on display wearing the company green and blue stripes. By the looks of it the M5 features a KW coilover suspension kit too, and a set of CLS-style lightweight alloy wheels. 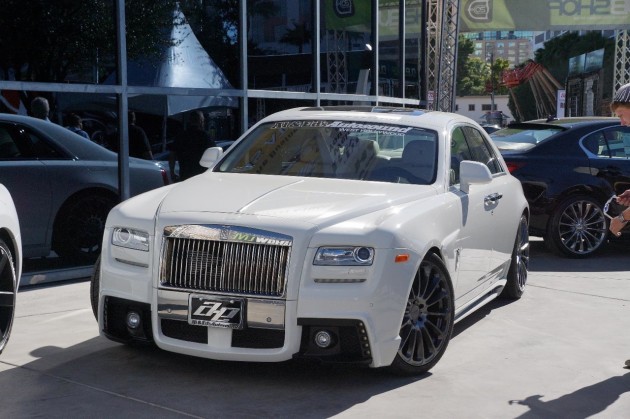 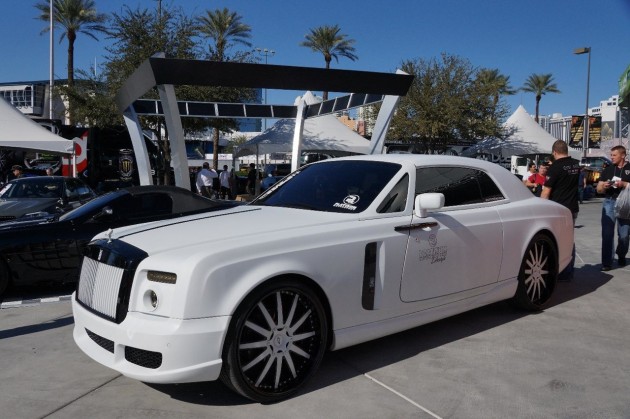 If you’ve got the money to buy an exotic supercar, you’ve probably got the money to modify it. As is the case with these pair of Rolls-Royce Phantoms. The first one goes for a more subtle style with dark alloy wheels and lowered suspension, while the second one is a Phantom Drophead Coupe and it goes for a more glamorous approach, with huge white and black-rimmed wheels. 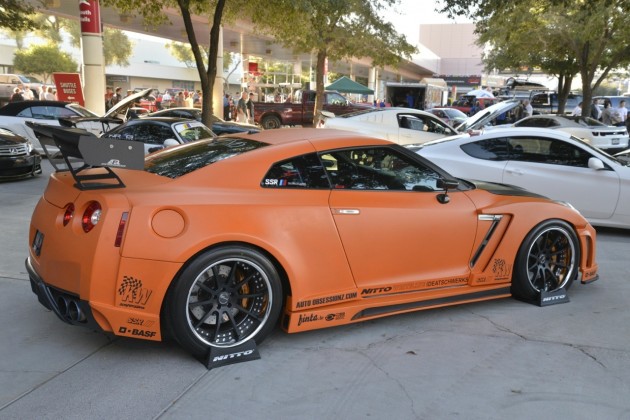 As for Japanese cars, an epic Nissan GT-R stands out wearing a unique matt orange colour scheme. It also features a very chunky and aggressive bodykit matched with some deep-dish alloy wheels. We’re not sure how much power is packed under the bonnet, but it at least looks like it has 1000hp. 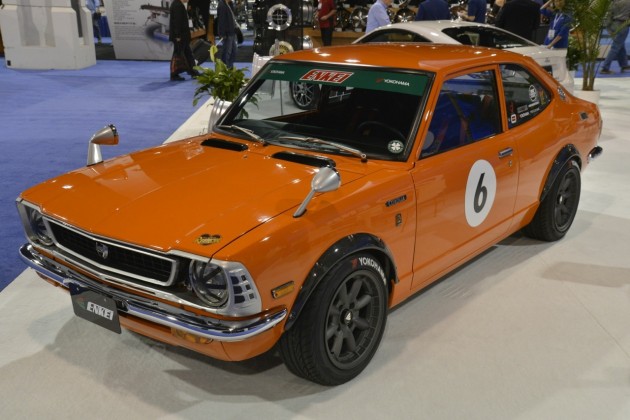 At the other end of the age spectrum is this immaculate yet supped-up second-generation ‘E20’ Toyota Corolla. It comes with flared guards front and rear, old-school Superlite-style Enkei alloy wheels, and a race-prepared interior with harness belts. 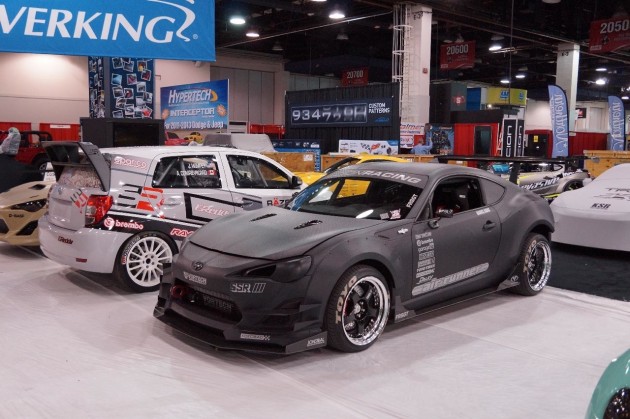 Also on display for Japan was a number of Toyota 86/Subaru BRZ/Scion FR-S project cars, including this full carbon fibre version. Toyota also had the NASCAR-inspired Camry on display and the Toyota Sequoia SUV drag car. 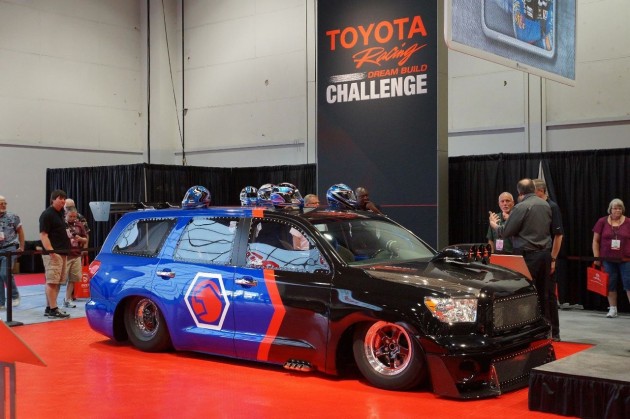 Lastly, we noticed a few Ferraris were used by aftermarket companies as show cars to display some of their latest products, especially alloy wheels. 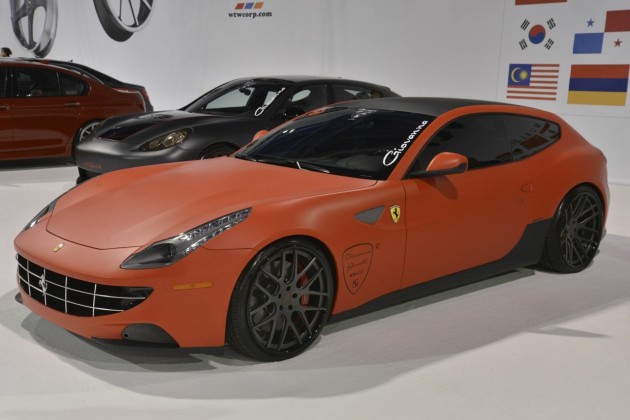 This Ferrari FF is a bit different, wearing a matt red colour scheme with matt black highlights. It showcases a set of Giovanna alloy wheels. 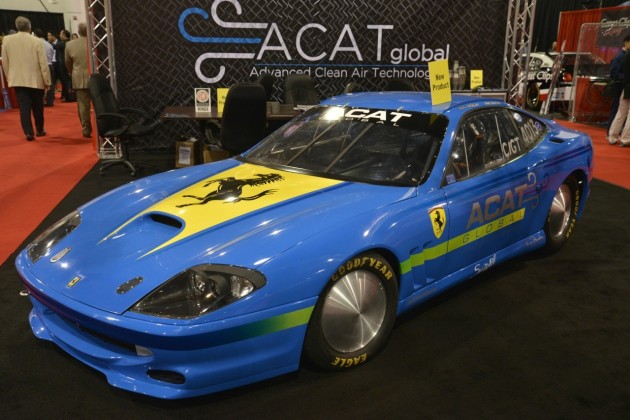 For the outright performance enthusiast this Ferrari 575 Maranello land speed special will tickle your fancy. Built by ACAT Global and JBR Motorsports, the car recently hit 347.7km/h at the Land Speed World Finals at Bonneville Salt Flats in August. It’s unknown what sort of power the V12 has been modified to produce, or whether the V12 still remains at all.

To finish off the 2012 SEMA Show highlights we thought we’d provide you with a little gallery of some of the girls of SEMA. Click through below to take a look. There’s also some added show cars in the mix that aren’t mentioned above, including a couple of old-school Porsche 911s, a JP Edition Hyundai Veloster, and a modified 2012 Ford Focus ST. Enjoy.