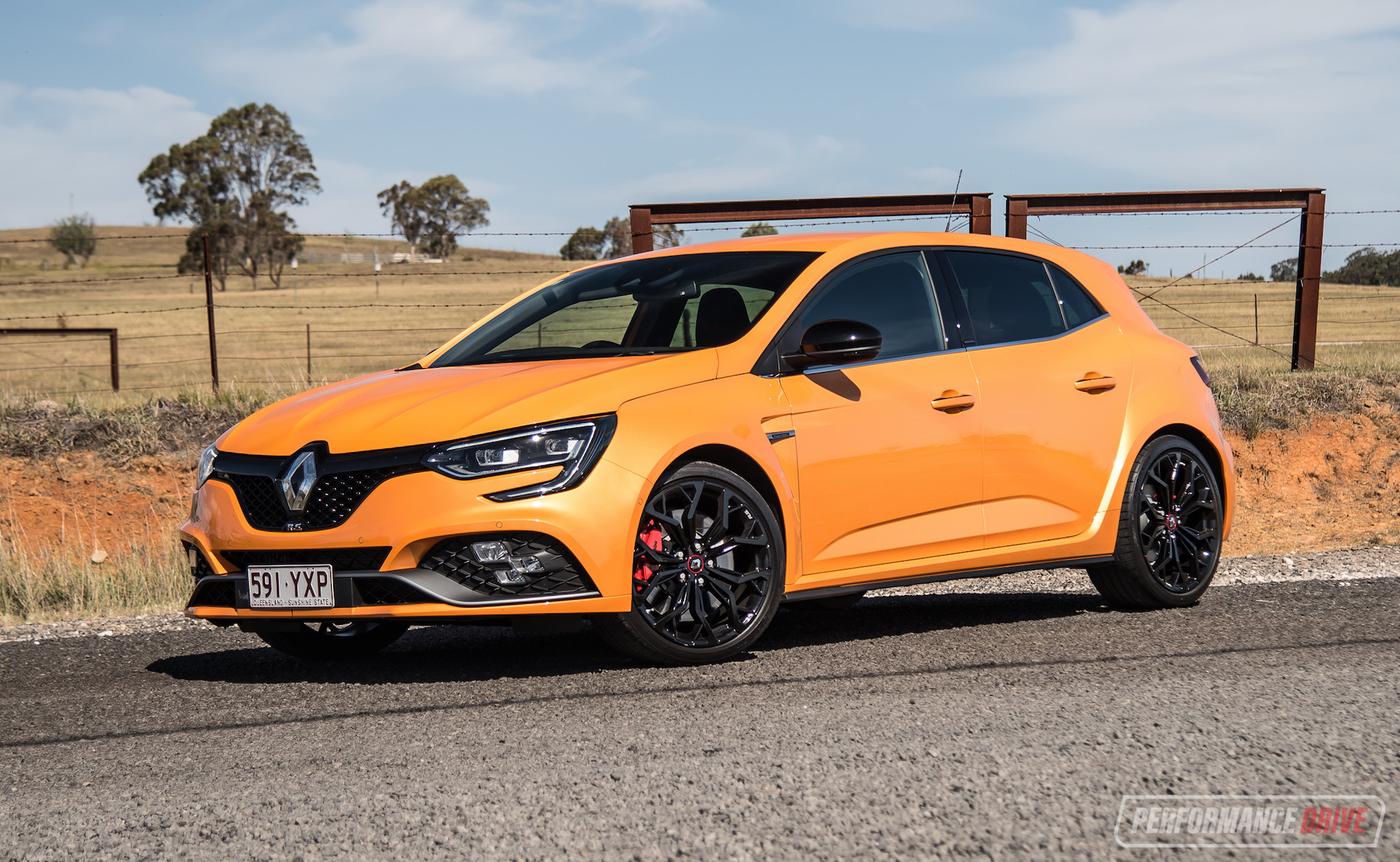 As if the hot hatch world wasn’t already heated enough, Renault has expanded its famed Megane RS range so that it now includes a whopping seven different iterations. We thought we’d better test another one following our initial RS Cup manual review earlier this year. 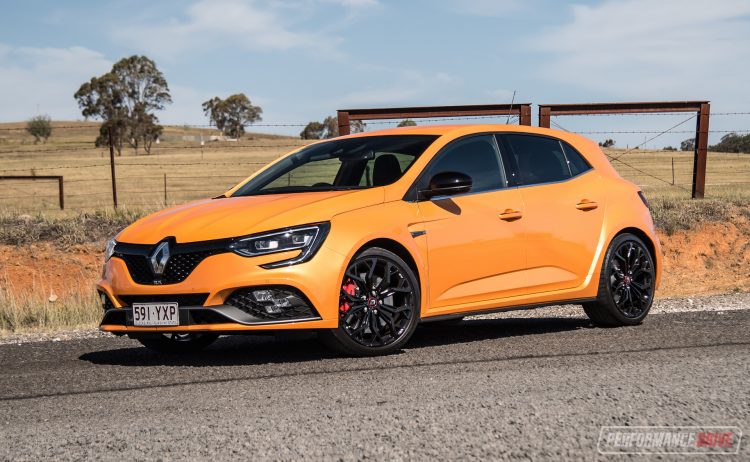 No other hot hatch on the market in this space is available in as many variants as this. And that’s a good thing for us driving fans as it means there’s likely going to be the perfect combination that syncs with your desires.

To quickly run through them, there’s the RS Sport manual and EDC auto (Efficient Dual-Clutch), the Cup manual and auto, the more recent (and more powerful) Trophy in manual and auto, and the limited edition, Nurburgring record-setting Trophy-R (manual only).

We probably should have asked to test the Sport in auto form for variety, but instead we’re here with the Cup EDC auto. We will try and test a version of the 220kW Trophy in the coming months as well.

The Cup EDC wasn’t initially launched with the new Megane RS in September last year. Instead, it was introduced in May this year. Prices start from $51,990, which is a harsh $3000 premium over the Cup manual. 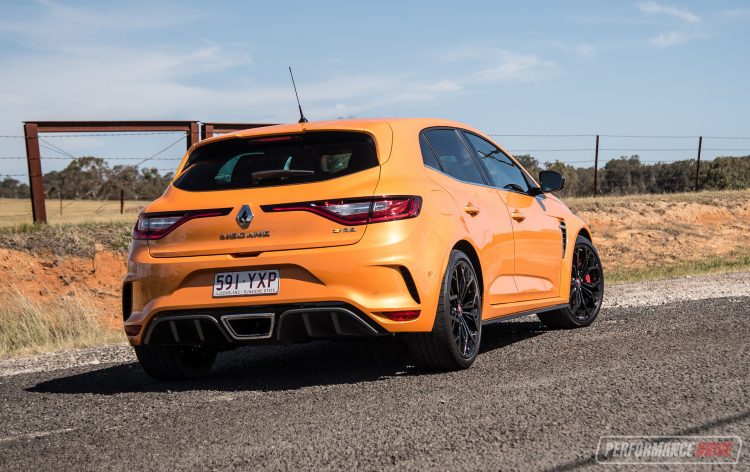 It is the top-of-the-range Megane, so yes, the interior is feature-packed. Hot hatches aren’t usually known for offering much in the way of luxury. But here, you get heated front seats, dual-zone climate control, and even a high-end eight-speaker Bose sound system standard on all (except entry Sport manual).

Although the standard 8.7-inch portrait-style touch-screen media interface is large and comes packed with sat-nav, various car settings, and Android Auto and Apple CarPlay, we’re not a fan of its functionality. There are far too many menu selections to go through before you land where you want to. For example, going from radio to Bluetooth media requires several screen presses. However, the driver can use a handy stub that’s hidden behind the steering wheel for some of the main adjustments.

Going for the Cup adds in a more hardcore sports suspension setup over the Sport variant (10 per cent stiffer), and you get a Torsen limited-slip differential, Brembo brakes with red calipers and bi-material discs (aluminium/cast iron), surrounded by 19-inch ‘Interlagos’ diamond-cut alloy wheels. 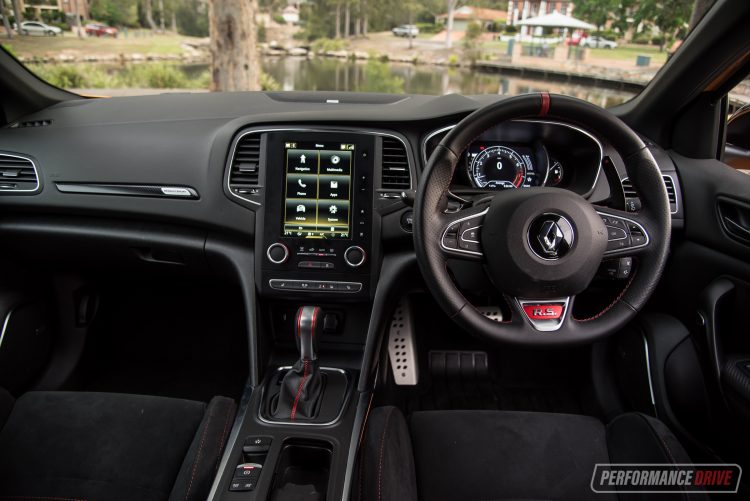 Seating comfort in the front is good. It definitely feels sporty as soon as you get in. The big chunky sports seats, wrapped in Alcantara and leather, really hold you in but without being cramped. Most of the controls are within arm’s reach, and the driving position is natural albeit hunkered down.

It’s not all without imperfections, though. The key card is just ridiculous. You can’t attach any other keys to it in the traditional way, which means you now need to carry around your house keys and the car key/card, as well as your phone and so on. The cup holders in the front are almost uselessly shallow as well. Although, the little adjustable bit in the middle does come in handy. 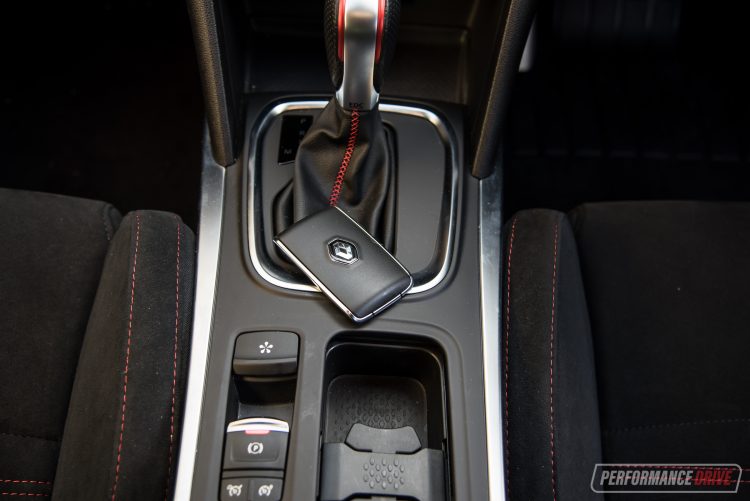 Rear seat space and comfort is good and easily meets the class standards. Passengers are treated to twin adjustable climate vents and there’s a flip-down centre arm rest with cup holders. There are also bottle holders in the doors.

The middle seat is a bit squishy, as usual, but overall you could use this as an everyday car, in terms of in-car packaging and practicality. Helping with this, the boot is measured at 434L. This is big for the segment. And it expands to 1247L with the rear seats folded down. 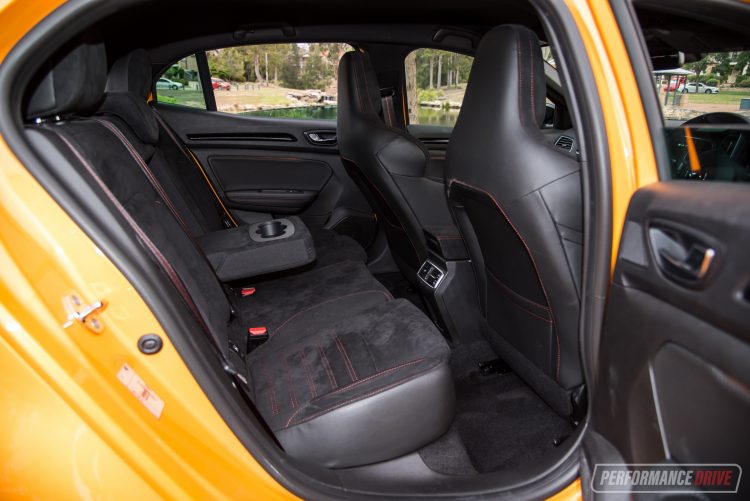 So, the power. It comes from a 1.8-litre turbo, which is down 200cc on the typical class capacity. Peak power of 205kW places it ahead of the Hyundai i30 N (202kW), but behind the Honda Civic Type R (228kW). Peak torque of 390Nm is ahead of the i30 N (378Nm on overboost), and again just behind the Civic Type R (400Nm). But as you can see, there doesn’t seem to be any major drawback of going with a smaller capacity engine in regards to outputs.

Taking a closer look at the specs reveals the Megane’s peak torque isn’t spread over a rev range, but only hit at specifically 2400rpm. The others offer some kind of rev span for peak torque. What does that mean? It means the engine can provide its full torque during more of your driving scenarios. For example, pulling away from corners or even overtaking, engines that offer a wide torque span don’t need to be pushed into a precise window to deliver their best. 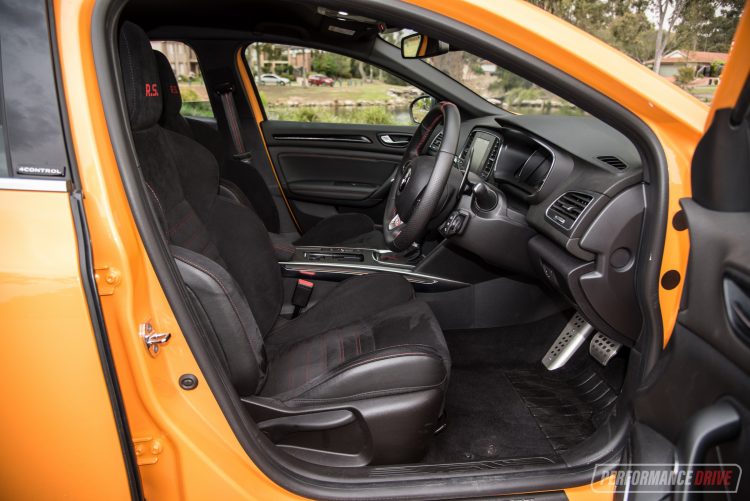 This isn’t as much of a factor in the auto version as the gearbox will figure out which gear to be in at any given time. And in fact our testing showed 60-110km/h comes up in 3.71 seconds in the auto, against 4.18 in the manual. Checking over the specs, it seems the gear ratios are different, but only marginally (see gear speeds below).

You still get six ratios with the EDC auto, so, theoretically, the added torque you get from each of the gears (except fifth and sixth as they are overdrives) is the same. But with the auto it’ll change down or up by itself, smoothly and very quickly. And you don’t have to think about it. 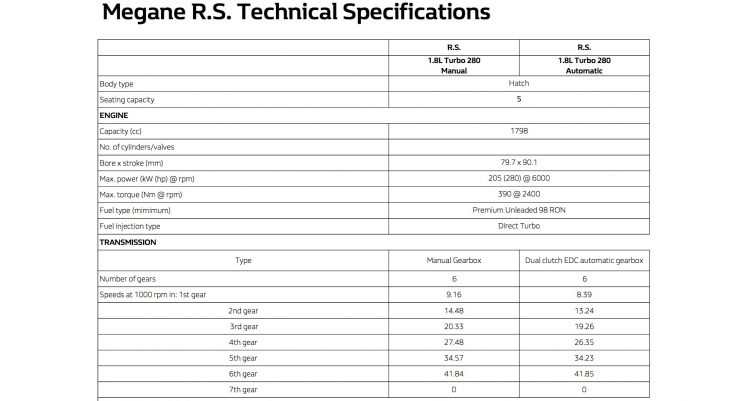 The auto is a bit strange in the default Neutral driving mode and in D. It gets all enthusiastic when you apply a fraction more throttle than normal, and then it holds the gears for too long. It’s like it’s trying to learn your driving habits, but too quickly. As soon as you give it some, even just a bit, it wants to go racing. The calibration needs further work in our opinion in terms of the standard day-to-day driving settings.

Flick it over into Sport or Race mode and it becomes much more harmonised. It’s definitely an angrier setting, with sharper throttle response, snappier gear changes, and it’ll hold the gears right up to near the redline in auto mode. And that’s perfectly fine; if you’ve decided to select these modes you obviously want to do racy stuff.

Speaking of racy stuff, we did our usual 0-100km/h tests with the Racelogic Vbox Sport to find out if there were any performance differences between the auto and the manual – we’ll save you looking back to our previous review, don’t worry. The best run we did with the manual was a very respectable 5.87 seconds. And it took quite a few runs to achieve this; we really had to concentrate on balancing wheelspin and clutch grab, yet ensuring there was no bogging down. 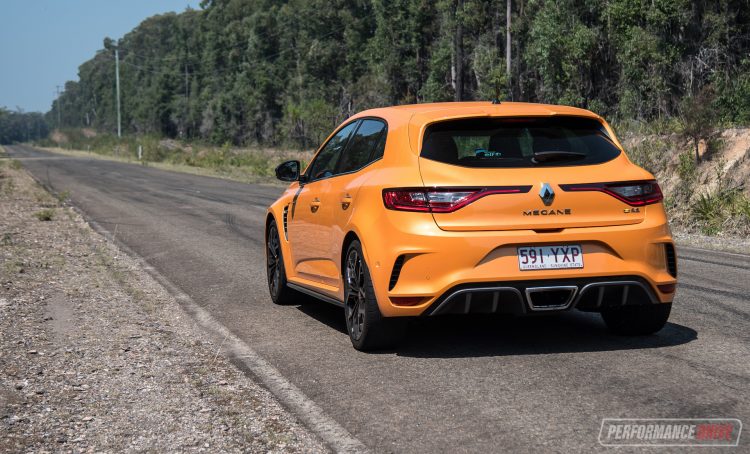 In this EDC auto version the take-off is much easier. However, the best we could do was 5.95 seconds. Interestingly, this wasn’t achieved with the factory launch control system (not offered with manual). Instead, our tests showed better results by applying only some throttle with the brake pedal depressed, and then letting it go, with the traction control turned off.

Anyway. Straight-line acceleration is not really what these cars are about. Cornering and cross-country performance is much more rewarding. And in the Megane RS Cup, with four-wheel steering as standard, you’ll be nothing but amazed. The sheer g-force that this thing is capable of producing is insane. At speeds below 60km/h (or 100km/h in Race mode) the rear wheels turn in the opposite direction to the front, enhancing agility. Above these speeds, the rears turn in the same direction as the front, improving stability. 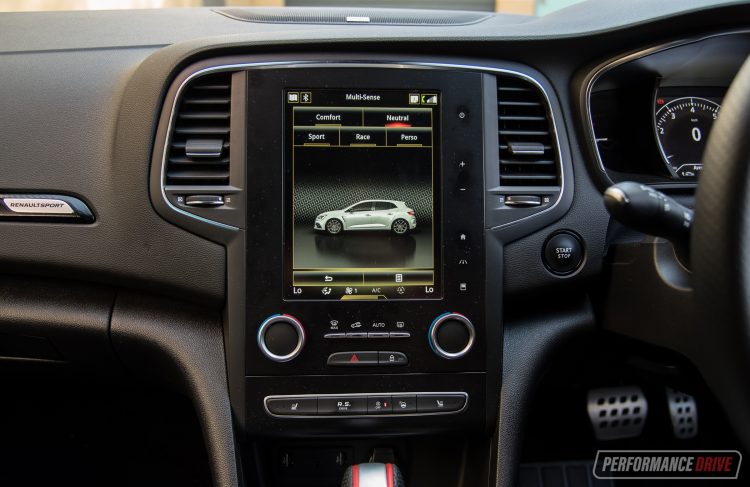 Tie that in with the Torsen limited-slip diff and the tight Cup suspension, and you’re left with an incredibly nimble machine. We actually think it can be too precise and almost too focused at times. Simply point the nose and it’ll dart there. Even with tiny movements of the steering wheel the Megane just wants to pounce. This is awesome in very tight, windy conditions, such as up or down a mountain pass. Out in the country though, where there are often bigger sweeping bends, we think it can invoke feelings of nervousness. Mainly because its reflexes are just so sharp. It’s hard to relax.

So, what’s it going to be, the manual or auto? Well, along tighter roads or conditions that require regular gear changes, there’s no doubt the EDC auto is quicker. You can even double-pull the downshift paddle and it’ll change down multiple gears under hard braking. And the speed of the upshifts simply cannot be replicated by a human in the manual.

If you live in country areas where you’re regularly galloping between distant corners, the manual is more fun. If you live in the city and you’re planning to head up into the mountains on the odd weekend, the EDC seems like a no-brainer to us. It is more versatile, and makes better use of the small torque window since the car’s brains can do the shifting for you. 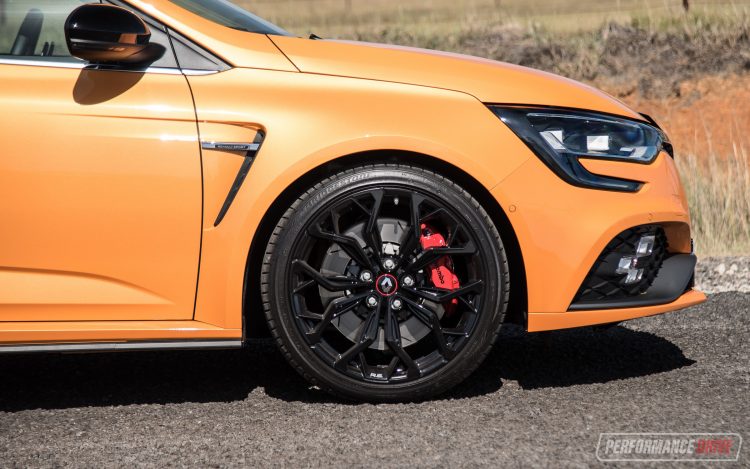 The latest RS has been on sale for a bit over a year now but it certainly has a solid position in the current field of hot hatches. It’s the only proposition with four-wheel steering, making it more advanced than anything else in this particularly department. Practicality is also high thanks to the availability of an auto transmission across more versions – some rivals aren’t offered with an auto at all, which really narrows their market.

We would take the EDC auto over the manual. Especially for long-term ownership. It’s easier to drive and more versatile, and it isn’t tiring in traffic conditions. We have no doubt that it is quicker in conditions that require agility, such as small race tracks or twisty mountain roads. It’s just a shame the auto is $3000 more expensive than the manual.

CONS:
– Auto calibration needs finer tuning, some delays and inconsistent mood changes
– Touch-screen menus require too many selections
– EDC auto is $3000 more than manual
– Key card is a hassle to carry around