It’s not every day a once-in-a-lifetime opportunity pops up on eBay. Here we have a genuine 1989 Ruf CTR ‘Yellowbird’ up for sale. The example is a one owner, one of only six aluminium lightweight editions ever made. And the only one imported into the US (according to the owner). 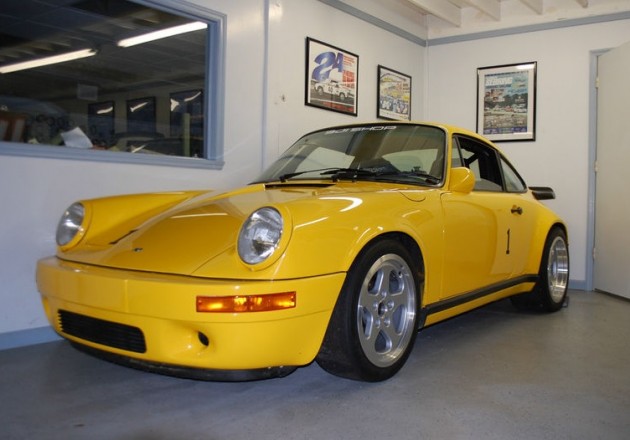 Keen Nurburgring fans and avid Porsche enthusiasts will recognise the ‘Yellowbird’ as the awesomely fast Ruf prototype featured in the film ‘Fazination at the Nurburgring’ video. The Yellowbird nickname was given to it by Road & Track.

The video is perhaps one of the best 911-specific driving/drifting demonstrations ever created. It was a raw promotional film created by Ruf, driven by ace company test driver Stefan Roser. It’s simply a must-watch video (see below).

This 1989 Ruf CTR Yellowbird example up for sale is a left-hand drive version built for a US customer. It doesn’t feature the side air intakes, like on the original prototype that blitzed the Nurburgring all those years ago, but it does feature the same foundations and powertrain.

In the back sits a 3.4-ltre flat-six twin-turbo engine, producing 392kW of power on 17.5psi (1.2 bar) of boost (up slightly from the standard 469hp/350kW thanks to new turbochargers). Torque is rated at 643Nm (553Nm in standard form), while the redline is 7400rpm. The advertisement says the original Ruf dyno chart is available.

Since Ruf is an automobile manufacturer itself, and not simply a Porsche tuner, the Ruf CTR comes with a huge range of bespoke items. There’s a full FIA-certified integrated roll cage, adjustable boost and brake biased controls in the cabin, and a lightweight interior featuring Recaro Kevlar bucket seats.

There’s only a few words needed when describing the Yellowbird’s speed; it was once the fastest production car in the world, recording a top speed of 340km/h (211mph). The owner of this example says it has reached a sustained speed of 215mph (346km/h) on German autobahns. Acceleration from 0-100km/h takes around 3.5 seconds.

Interested? Be prepared to pay up for this piece of legendary automotive excellence. It’s sitting on eBay now with a buy now price of US$279,000 (approximately AU$257,218). If only we had the funds…