Even Lamborghini has succumbed to the gravitational allure of the SUV market. But what a way to enter it. Welcome to the Lamborghini Urus. This is one of the most powerful and fastest production SUVs in the world. Arguably, it’s also the most exciting and most extravagant. 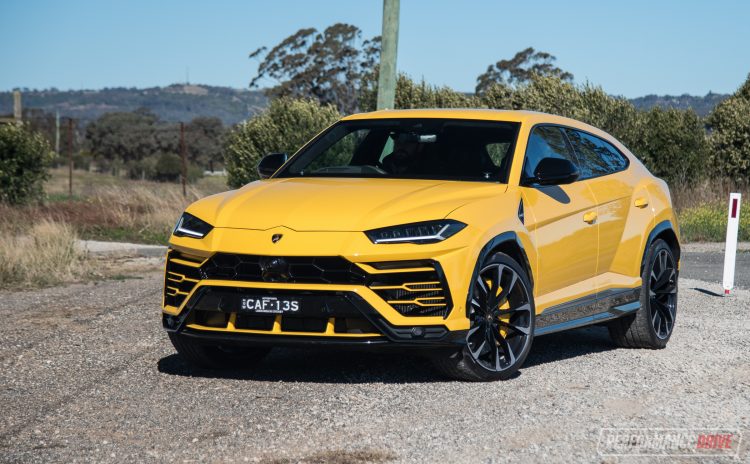 The Urus is the first SUV from Lamborghini (excluding that LM002 military-grade 4×4 from the 1980s), and the first-ever turbocharged Lamborghini to enter the showroom. Although it is an all-new model, Lamborghini has borrowed the MLB Evo platform from its parent company, Volkswagen, for some solid foundations.

But don’t worry. This isn’t a glorified Touareg. Far from it, actually. Imagine a supercar class of SUV; exotic materials, outrageous design, and ultra high power and speed. The Urus has it all.

Just one variant is available at the moment, however, there are rumours of a ‘Performante’ version being in the works. There are of course loads of personalisation options for the time being, so you can essentially create your own special edition. Prices begin at $390,000 (excluding on-road costs). 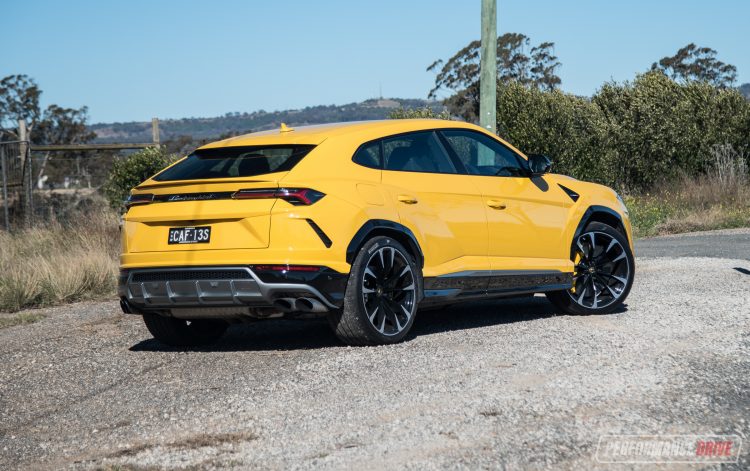 It is a good thing that Lamborghini has used the MLB Evo platform as a base. With solid German foundations the Urus automatically collects some of the practicality benefits that the group has engineered into the platform. For reference, this layout is used to underpin the latest Porsche Cayenne and Panamera, the Bentley Bentayga, and a bunch of new Audis.

Though, Lamborghini has made drastic changes to it so it’s almost impossible to see or feel any of its cousins’ DNA. Starting with taking a seat inside. This interior just screams Lamborghini. You can see some design inspiration is pulled from the supercars, with hexagonal shapes spread around the place and plenty of toggle-style switchgear. The driver also grasps a typical three-spoke steering wheel featuring prominent paddle shifters, while just behind is a fully digital instrument cluster that uses exciting graphics and colours.

Seating space is quite conventional. You won’t bump your head as you climb in, and once you’re in, you’ll be pleasantly surprised that your neck is straight and all of the controls line up perfectly with your body. And we’re not being sarcastic, believe it or not. But seriously this is a very comfortable and luxurious place to be. There’s even optional massage seats for the front (as tested), which are excellent. 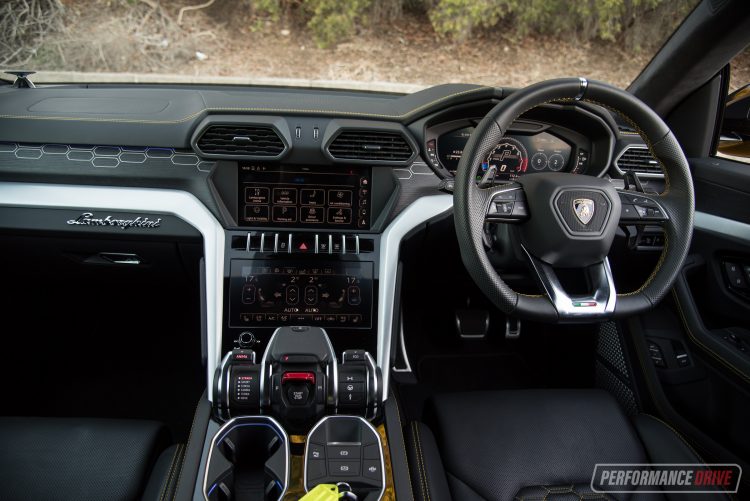 Aside from the cool fighter-jet-style ignition sequence, which requires you to lift up a safety latch before you can hit the go button, the Urus features dual TFT touch-screens. Although the haptic feedback as you press the screen is interesting, especially for tech lovers, we find it to be a little frustrating while trying to make selections on the go; you need to press firmly before the desired selection is processed. We guess this can work in your favour as it reduces the chances of making false selections as your hand wanders close to the screen.

What we’re most surprised about inside is the rear seat space. It’s actually massive. With loads of legroom, and very respectable headroom despite the coupe-like roof, this is a place you would happily be relegated to if the driver’s position is taken. You’ve got your own climate control as standard, with fan speed and temp control presented on a suave panel, and there’s even cup holders and bottle holders in the doors. Such facilities are not usually seen in Lamborghinis. Right at the back there’s a big boot, measuring 616 litres. This can be expanded to 1596L with the rear seats folded down. 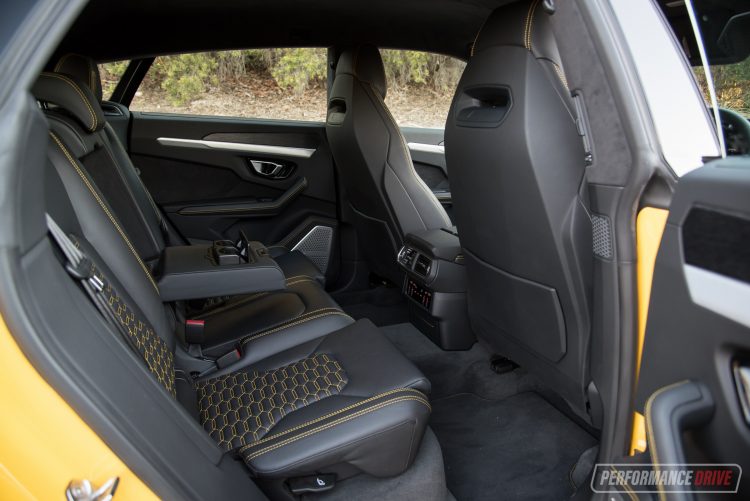 The options list isn’t as daunting as you might think. In fact, one of the most expensive options is the Bang & Olufsen 3D Advanced sound system (as tested), which will set you back $11,665. That’s not bad, for this end of the market anyway. We think it is definitely worth it, too. The surround quality is outstanding. The most expensive main option (aside from the really bespoke stuff) is the four-seat configuration, which deletes the middle rear seat and replaces it with a bespoke console. It’s priced at $12,725.

While many of the mainstream carmakers are now offering a five-year warranty for their vehicles, Lamborghini isn’t far behind. The Urus is covered by a standard three-year/unlimited kilometre package, and that’s pretty impressive for a supercar. But, going further than that Lamborghini does offer an optional five-year warranty plan, priced from $9191. To put that into perspective, that would be like Toyota offering a significant warranty upgrade on the base $27,790 Camry Ascent for just $650. Seems like fair value to us. Again, keeping in mind this end of the market. 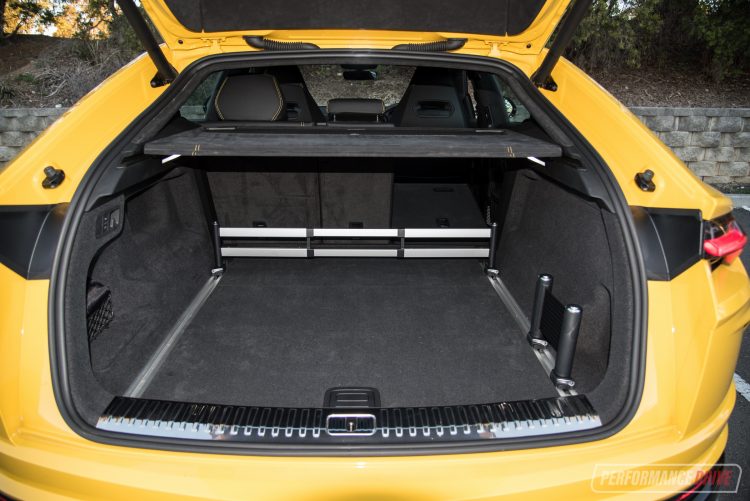 Lamborghini will tell you the engine is a completely bespoke unit. But if you strip it all back you’ll find it is based on Audi’s 4.0-litre twin-turbo V8, which Porsche and Bentley also borrow for their vehicles, albeit tuned differently. It’s assembled at a Volkswagen plant in Hungary and then shipped to Italy where the rest of the Urus is produced. Lamborghini has obviously made some modifications to the motor, such as designed its own heads and made various tweaks to the accessories and components that hang from it. Needless to say, it is the most powerful iteration you’ll find within VW Group.

Peak power is rated at a whopping 478kW and is reached at an un-Lamborghini-like 6000rpm, with a 6800rpm redline. But more importantly, Lamborghini says it went for a turbo V8 over a V10 or V12 because of the torque. Torque is much more appropriate and useful when lugging around heavy weight like this. So, the engine is dialled up to develop 850Nm, available between 2250rpm and 4500rpm. As a result, the mid-range pull is astonishing.

Using our Vbox Sport we clocked a best 0-100km/h in an unbelievable 3.44 seconds, and 0-200km/h in just 11.98 seconds. These times are quicker than Lamborghini’s claims of 3.6 seconds and 12.8 seconds, respectively. The quarter mile was passed in just 11.54 seconds at 197.1km/h. These numbers look insane, and that’s exactly the word you tend to be thinking when you’re inside and experiencing it. 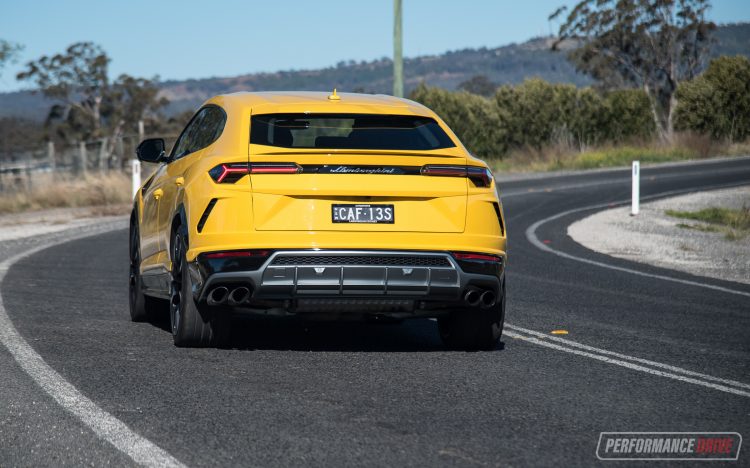 It also sounds rather extraordinary. Even though there’s a dirty and angry V8 snarl and crackle from the exhaust pipe, inside, you can hear Lamborghini has managed to recreate a bit of its trademark howl from the induction. It’s hard to explain in words but as the engine screams up through the rev range, there’s a distinct wail that sounds faintly similar to the V10 howl in the Huracan. Have a listen in our 0-100 video below to see what we mean.

The braking performance is also very supercar-esque. That’s because up front there are 440mm carbon ceramic discs that are clamped by Earth-wrinkling 10-piston calipers. These are apparently the largest discs in the world, for a production car. We’re not going to argue that. Going back to our Vbox we measured 100-0km/h in an easy 33.79 metres. We say ‘easy’ because we’re convinced that a slicker surface, such as a race track, could reduce the distance even more.

A handful of 100-0km/h braking tests reveal the full story, though. Thanks to the carbon ceramic construction of the discs, you’ll have a very hard time seeing these things overheat. After a number of hard runs up and down our usual mountain pass test route, the brakes never twitched an eyebrow. They can withstand relentless punishment, and keep in mind the Urus isn’t exactly a lightweight. According to local specs the tare weight is 2268kg. That’s more than the latest Porsche Cayenne Turbo (2117kg) which uses the same platform, and a similar engine. 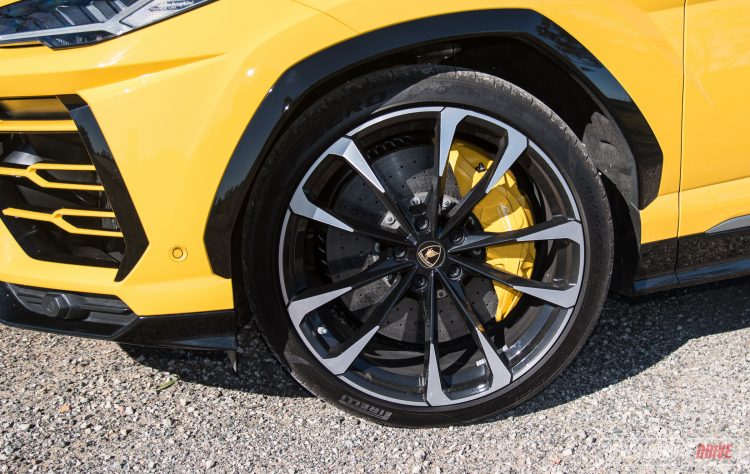 Around corners the Urus darts around like a mosquito on Redbull. The electromechanical steering is quick to respond to your finest movements, and in fact on the highway it can seem overly busy until you get used to it. Advanced four-wheel steering helps it glide around slow sweeping bends, and assists in tight car parks by virtually shortening the wheelbase.

Give it a proper tickle along a mountain road and you’ll experience completely surefooted, predictable and solid handling. Active anti-roll bars ensure there is basically no body roll at all, while the standard air suspension with adjustable ride height provides respectable comfort.

Under full power there is some torque-steer and tug at the wheel as it clinches and scurries during its stampede toward the next corner. Lamborghini has infused torque vectoring into the all-wheel drive system, which helps to pivot the Urus around by sending power to the outside wheels (among other things). It is an amazing beast to drive on a spirited road.

If there is one thing lacking in this area it’s the man-to-machine communication. In that sense, there may be some hints of Volkswagen coming through after all. The steering is sharp and precise, and the grip levels are far beyond what any sane human being would expect. But the way this is all conveyed back to the driver does seem a bit formal and imperious, rather than fun and inviting. Compared with, say, the Huracan, for example. Obviously these are two completely different vehicles but we think Lamborghini could have introduced some more feel and emotion in this department. Maybe Lamborghini knows SUV buyers better than we thought? 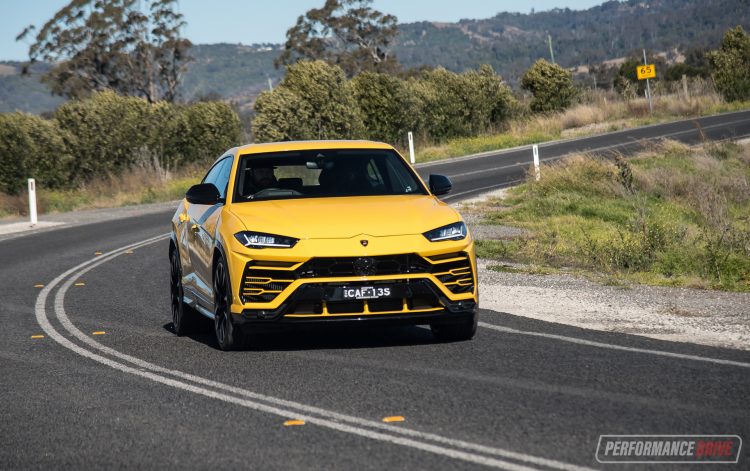 This eight-speed torque-converter automatic transmission, sourced from ZF, is a beautiful unit. It dices up the engine’s immense figures perfectly. There’s never a moment of pause as it climbs up through the gears. If there is any delay, it’s, what feels like, minor turbo-lag. But only during specific occasions, such as when you’re asking for immediate full open throttle from under 10 per cent throttle. When you’re working through the gears, up and down on a nice road, going from 50 per cent to 80 per cent, down to 30 per cent and back up to 90 or 100 per cent throttle, the minor lag isn’t as noticeable. It’s only when calling for maximum throttle from zero.

Overall, the Urus is an extremely exciting vehicle to drive. It feels like no other SUV on the market and clearly demonstrates that it is a super car at heart. The power of the engine and the speed it can accumulate is ridiculous. The soundtrack from the V8 is also mesmerising, particularly from inside the cabin. Add in the safety and security of all-wheel drive grip and you’re left with a very unique and unforgettable driving experience.

Well, what a machine. It doesn’t quite offer the purity of its supercars, but who really cares? If you’re buying an SUV you want some level of practicality. And that’s what this offers. It’s as crazy-fast and bonkers to look at as a supercar, but you can drive it everyday and shove some shopping and/or kids in the back. We don’t think any other carmaker could have done a better job to introduce this new segment; the Super Sports Utility Vehicle. 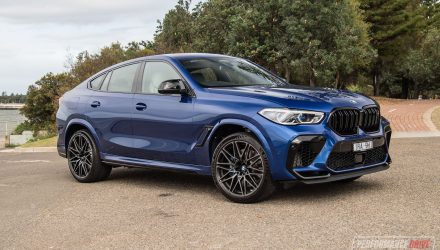