Toyota has pulled the wraps of the Toyota 86 convertible concept ahead of its Geneva Motor Show debut next week. Called the FT-86 Open concept, the car will be used to gauge the public’s reaction in regards to a possible production version down the track. 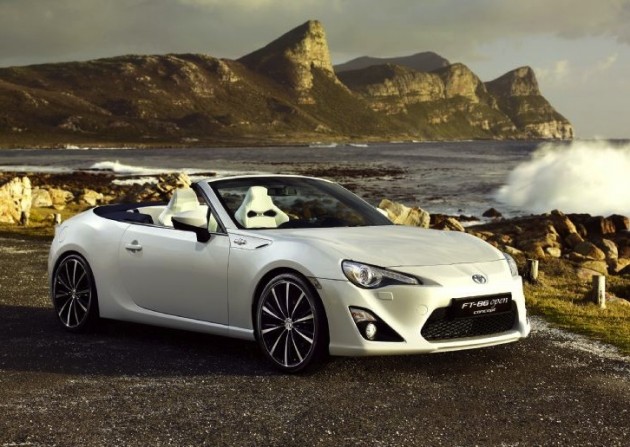 As previously reported, Toyota 86 engineers have said the 86 was developed with a convertible in mind from the start. The sporty two-door profile certainly goes well when the top is removed.

The concept is slightly different in other areas compared with the coupe. The interior, for instance, has been completely redesigned by a Milan-based designer who worked in the colour combinations for an “evoking quality and sportiness”, with contrasting white and navy blue trimmings.

It seems the car that was spotted a week ago in South Africa was this exact car, as you can tell by the large multi-spoke alloy wheels. It looks like Toyota was in South Africa for the photo shoot.

As for the engine, it’s understood it is the same 2.0-litre naturally aspirated four-cylinder boxer engine as the regular Toyota 86 and Subaru BRZ. It produces 147kW and 205Nm.

It will be interesting to see how the public reacts to the FT-86 Open concept at Geneva next week. Toyota will likely make some sort of major announcement during the show, which starts on March 5.