This is the all-new JL 2019 Jeep Wrangler Overland. It’s more intelligent than before, with cleverer interior packaging, and safety is improved significantly over the predecessor. But does this mean it loses some of its rugged, old-school charm? Let’s take a look. 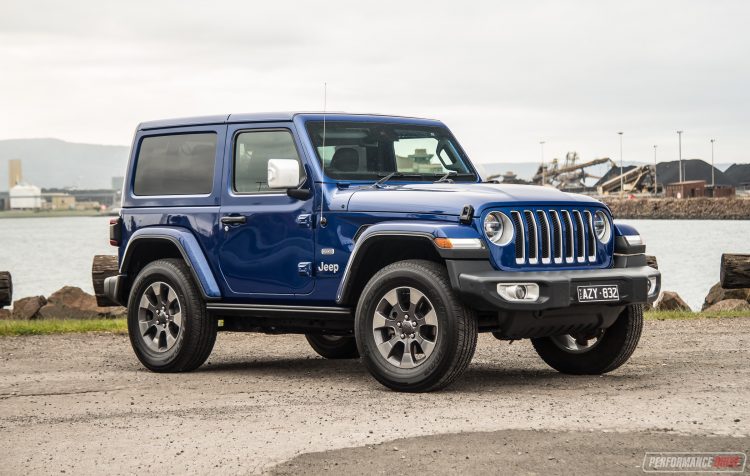 The fourth-generation Wrangler was officially unveiled back in November 2017, promising to be the most capable 4×4 on the new-car market, and the most advanced generation ever in the iconic nameplate’s 30-year history. In Australia there are two two-door variants; the Sport S and the Overland. Both come with a 209kW/347Nm 3.6-litre Pentastar V6 petrol engine.

If you need more interior space there are also four four-door variants; Sport S, Overland, and Rubicon in diesel and petrol. Most of these feature the V6, except the Rubicon can be had with a 147kW/450Nm 2.2-litre turbo-diesel. All come standard with an eight-speed automatic and part-time four-wheel drive, with a two-speed transfer case – there is no manual option in Australia.

For this rather handsome little two-door Overland you’ll need to part ways with at least $59,450 (excluding on-road costs). 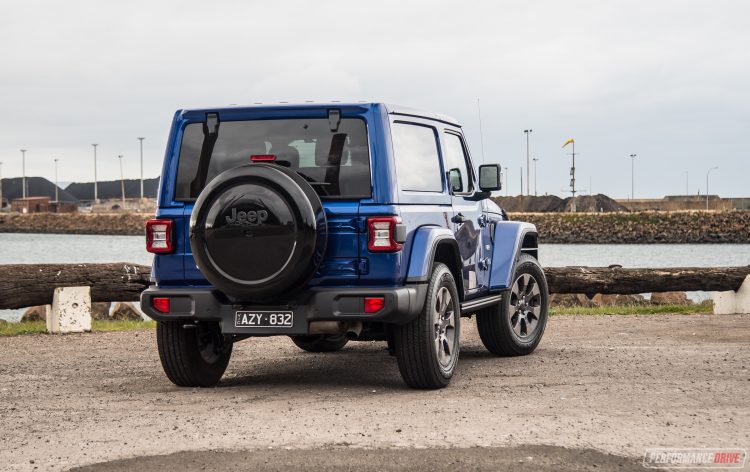 You can immediately tell Jeep has spent considerable effort updating the cabin to meet modern standards. For example, there’s now a crisp 7.0-inch TFT digital screen within the instrument cluster that offers a range of displays. In fact, Jeep says there are over 100 different display configurations, including tyre pressure readouts, trip data, and some interesting real-time off-road info. And then on the dash is a great big 8.4-inch, almost square Uconnect touch-screen media interface (7.0-inch for the Sport S).

The Uconnect system is one of the best in the business in our opinion. Not only is it large and with clear menu functionality, the depth of information and connectivity is very impressive. You can connect your phone via Android Auto or Apple CarPlay, and the Overland packs in sat-nav, a rear-view camera, and a kicking nine-speaker Alpine sound system as standard. The Overland also comes with heated front seats, a leather trim, and climate control.

Seating comfort is really good. We love the perched up position and the flat and tall windows. The view outside is so unobstructed, and you can easily glance over your shoulder straight down over the side, which is perfect for off-roading. The cushioning and support from the front seat is also decent, although, lateral bracing isn’t prominent. On the other hand, the Wrangler isn’t really designed to conquer spirited driving roads anyway. Being relatively flat, the seats do suit a wide variety of body shapes and sizes. 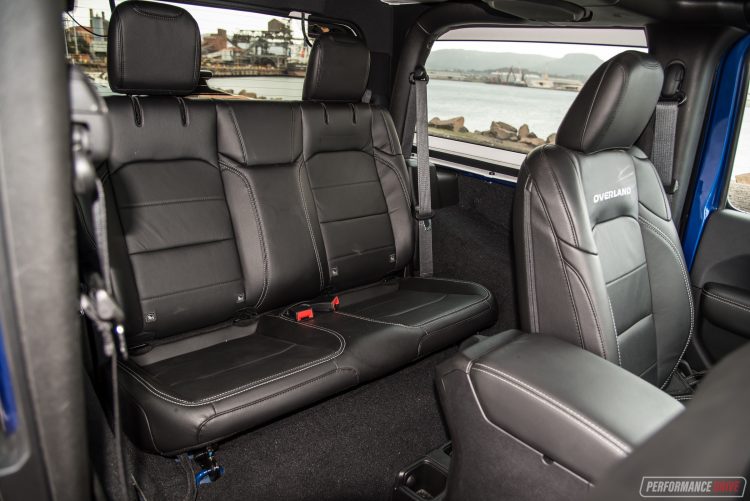 The rear seat area is surprisingly accommodating, for a two-door. You do need to rock the front seat forward to get in, and it is a big step up regardless of front or rear, but once you’re in the legroom and headroom are actually quite good.

Down below are a pair of cup holders, and there’s even twin adjustable air vents for the climate, four charging ports (two USB, two USB-C), and an Australian outlet rated at 230V. The two seats are mounted high, allowing your feet to drop down. This also provides a great view via the side windows and through the front. Unlike most two-door vehicles with seats in the back, the rear isn’t claustrophobic at all. Boot space is understandably small in the two-door, with 197L on offer. You can fold up the rear seats though to expose a much more useable 587L. 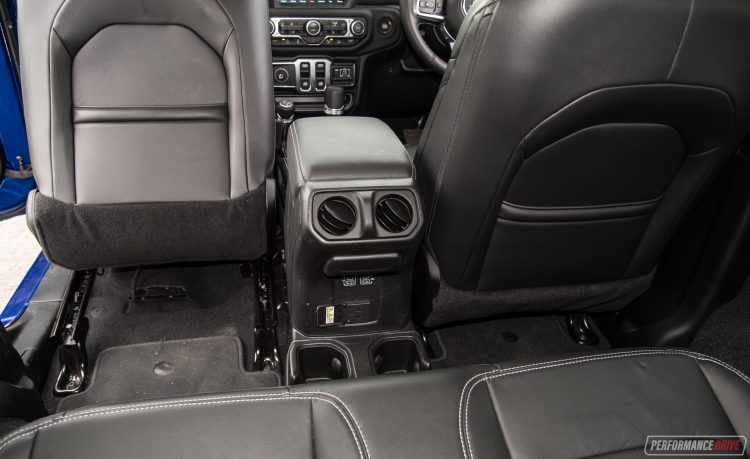 For endless amounts of headroom you can mechanically remove the roof. But if you’re planning to take the roof off, keep in mind this is something that takes a good couple of hours. It’s certainly not a convertible in the traditional sense where you can go for a quick drive with the roof down just for fun, and then put it back up. Instead, we get the feeling it’s more of a seasonal thing; take the roof off for the summer and leave it off until the cold comes.

On one hand it is disappointing that it takes so long to remove the roof, but we like to think of it another way; you get pretty much all of the refinement and quietness of a conventional wagon body style, but as a bonus you can technically take the roof off for a fun weekend away at the beach, for example. There’s nothing on the market that offers this kind of twin-personality character, except the Range Rover Evoque convertible, but even that is a soft-top. 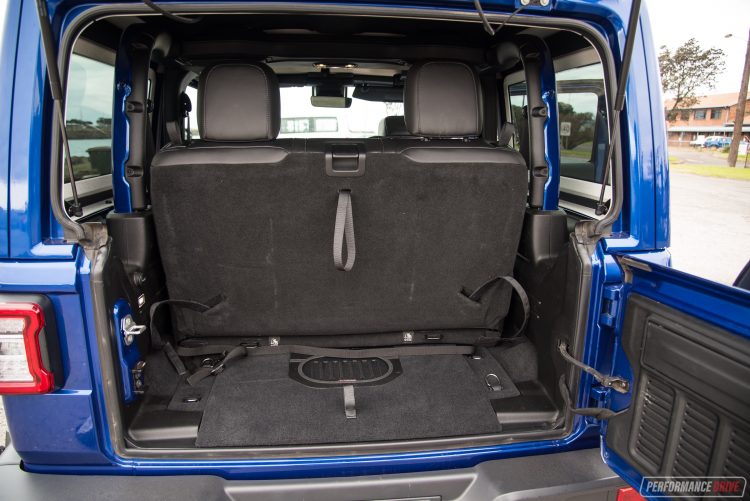 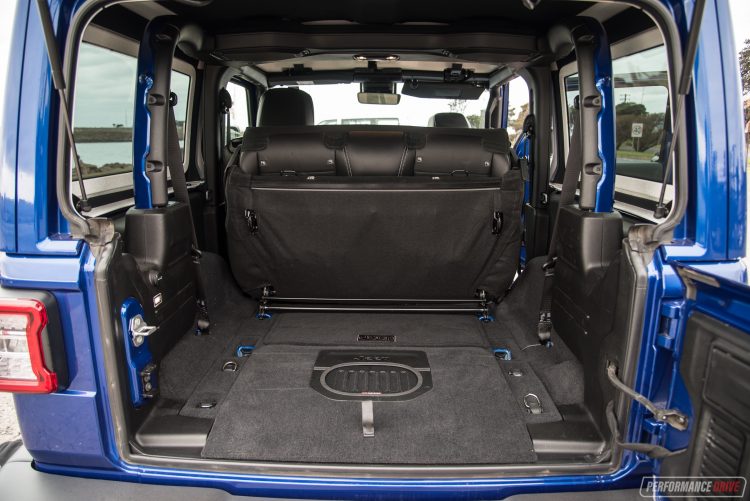 Jeep has taken big leaps forward in safety with the new JL Wrangler. The Overland comes with a lot of the latest assist technologies such as autonomous emergency braking, blind-spot monitoring, rear cross-traffic alert, and a rear-view camera with front parking sensors. Even so, the Wrangler is one of the least-safe vehicles on the current new car market, according to ANCAP.

In the latest crash tests the new model returned a dismal score of just one star. Just a single star, out of five. Yes, ANCAP/NCAP crash tests are performed in controlled conditions in a lab and you could argue that the latest marking criteria involves more pedestrian safety than ever before. But no matter how much we all might try and justify it, one star is very poor by today’s standards – even the new Suzuki Jimny overshadows the Wrangler, scoring three stars. 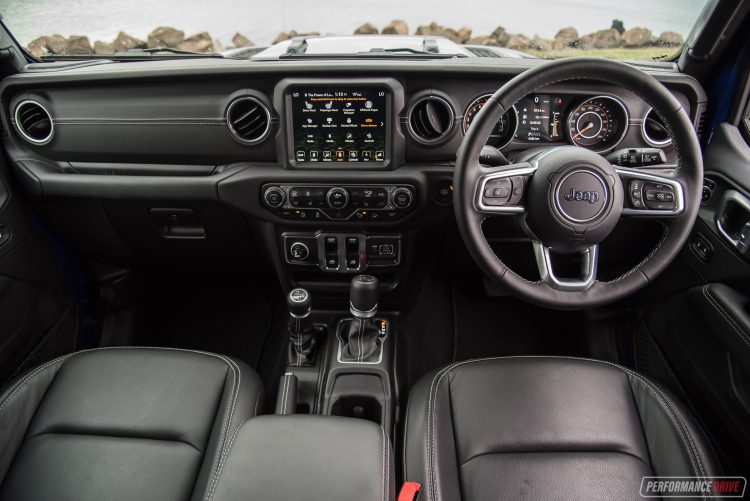 Jump up into the Jeep and you’ll immediately be reminded of its legendary 4×4 and military roots. You peer through a flat windscreen, with thin A-pillars helping to provide a clear view ahead. The steering wheel only just protrudes forward from the flat and short dash, but it does offer tilt and reach adjustment. While we wouldn’t describe the driving position as perfect, the entertainment and fun factor even just sitting behind the wheel is huge.

Under the bonnet is a carry-over 3.6-litre naturally aspirated V6 petrol engine, called the Pentastar – Americans like giving names to their engines, for some reason. The unit was used in the previous model and it is a shame no major revisions have been made to it. Peak power is reached at a roaring 6400rpm (up from 6350rpm on the predecessor), where you’ll experience the same 209kW. Maximum torque, rated at 347Nm, as before, is reached at 4100rpm (down from 4300rpm). 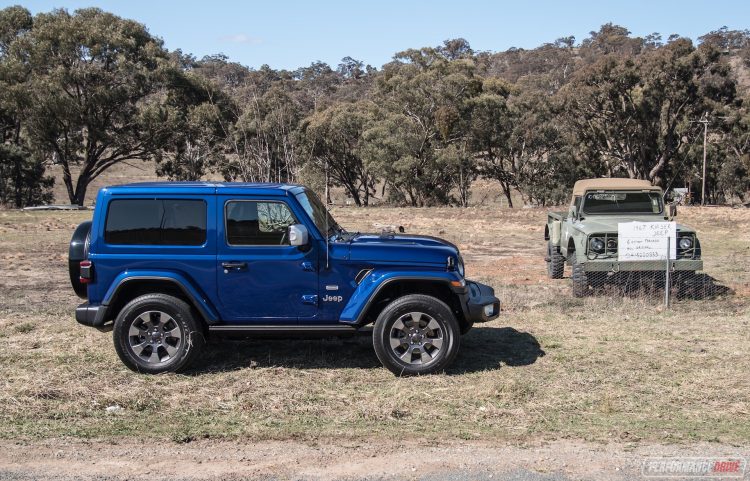 What is new and highly welcome is an eight-speed automatic. Replacing the old five-speed auto, you don’t need to worry so much about hitting and remaining in those precise rev ranges; the new transmission divides up the breadth of performance. For example, pulling away from roundabouts before resulted in some low-rev lag before the transmission kicked down to second gear. Now, third gear is freer-revving yet shorter-lasting, making for smoother and more seamless progression in these, and similar, conditions.

Fuel economy has been improved drastically over the predecessor as a result. Taking the Overland two-door automatic as an example, the official average rating drops from 11.3L/100km to 9.6L/100km. Despite featuring a smaller fuel tank than before (66L down from 70L), the theoretical average range is 688km, improving on the previous 619km on-paper range. The engine continues to run on a minimum of 91 RON petrol, which does help to minimise running costs.

During our week of testing (1207km) this example returned an exact average rate of 9.6L/100km. Our drive included a long highway run from Sydney to Canberra, and back, as well as performance testing and off-road driving. 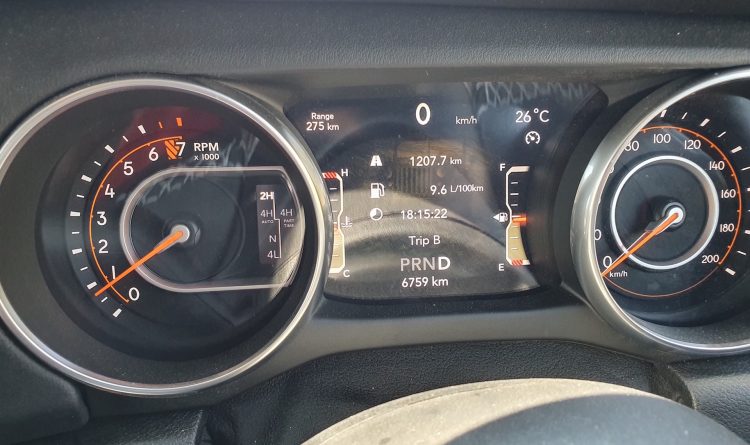 Of course, the great thing about a petrol V6 is the power and performance. We think the throttle calibration is overly sensitive, making it feel like it’s constantly in a ‘power’ or ‘sport’ mode. You only need to touch the throttle to send the Wrangler lurching and heaving forward. Although, you do eventually get used to it. For serious off-road fanatics though this could become more of an issue, especially when you’re in those tight and technical situations where you only require minimal throttle input.

On the road the performance is excellent. We timed 0-100km/h in a brisk 7.98 seconds, which is more than quick enough for this type of vehicle. It’ll easily sprint off from the lights and forge ahead from traffic, and overtaking is no concern. Again, the eight-speed auto seems to work its magic in such scenarios, providing an ideal ratio to maximise the power and torque for any speed. The power delivery is mostly smooth and progressive, too, resulting in a effortless drive. 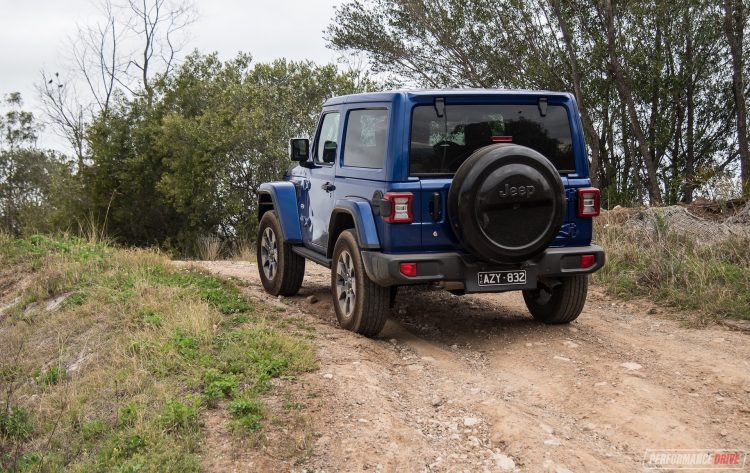 Off the road is obviously where this machine belongs. Underneath remains a live axle suspension setup front and rear, with coil springs for comfort and good wheel travel. It’s all heavy-duty construction, with full-width track bars made from forged steel for the front, and two upper and two lower forged steel control arms for the rear. The approach angle is an impressive 34.8 degrees, with a departure angle of 29.2 degrees. Tie that in with a ground clearance of 260mm and you’re left with a proper off-road vehicle that can easily tackle moderate to quite serious tracks in the bush.

During our test we ventured into what we were told were going to be some tough tracks. But soon after arriving we found out these were just unsealed roads. Rough dirt roads, at best. So as you can imagine the Wrangler gobbled it all up with absolutely no hesitation. With a combination of outstanding clearance and a powerful engine, with high- and low-range, we have no hesitation in saying that it remains as one of the most capable SUVs on the current market. 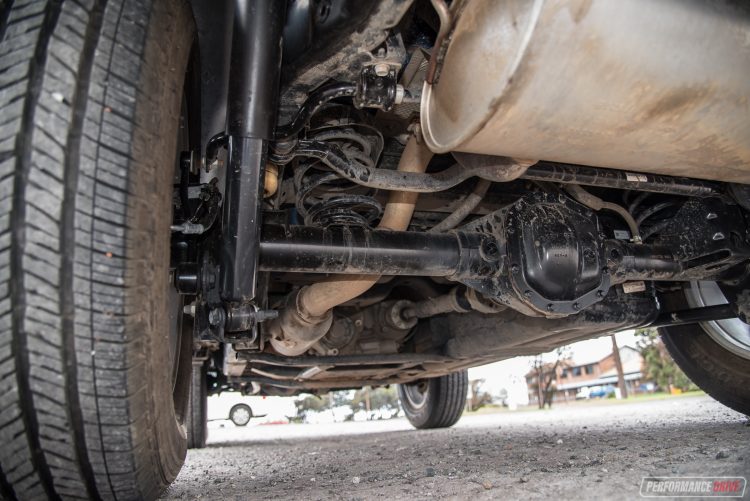 We really enjoyed our time with this little Overland two-door. We know, it’s far from the safest SUV on the market, and the throttle is very sensitive, and fuel economy isn’t terrific. However, it is a really fun vehicle. And that seems to quash some of those shortcomings. It’s also extremely easy to drive, partly thanks to the excellent visibility and user-friendly controls.

Do we recommend you buy one? If off-roading is something you plan to do regularly, then yes. This is definitely worth checking out. There is no doubting its capability or expertise in this area. If you are not planning to head off road though, or only on extremely rare occasions, but you want a fun, high-riding SUV, then no. At the moment there are a number of SUVs on the market that are safer, more refined on the road, and more fuel efficient. These are worth checking out first.

PROS:
– Off-road capability
– Uconnect touch-screen
– Loads of power and great performance from V6
– Really easy and fun to drive
– Entertaining and practical interior (for this style of vehicle)

CONS:
– 1-star ANCAP safety rating
– Snappy throttle sensitivity takes some getting used to
– Not the most refined on-road driving experience