A special Electric RaceAbout (E-RA) prototype from Finland has unofficially set the new world record as the fastest EV on ice, recording an average speed of 252.09km/h. 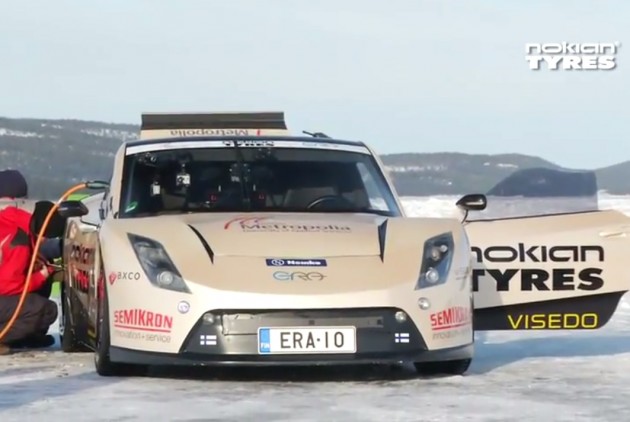 We say ‘unofficially’ because the effort hasn’t actually been certified by the Guinness Book of World Records, mainly because such a record doesn’t exist at the moment. Still, it is the fastest ever speed recorded of an EV (electric vehicle) on ice.

The E-RA is powered by a 33kWh Altairnano lithium-titanate battery which sends current to four electric motors. The motors then produce a combined output of 282kW of power and 3200Nm of torque. A full charge range is around 200km.

All up, with the battery pack and four motors, the E-RA tips the scales at 1700kg, giving it a reasonably good power-to-weight ratio. It’s capable of 0-100km/h in around 6.0 seconds.

As for the top speed, according to a GPS VBOX system, the E-RA hit 260.06km/h during its record runs which took place on Lake Ukonjarvi in northern Finland. The runs involved driving along a strip flat out for 1km, and then in the other direction.

Take a look at the video below for a bit of an overview of the record runs.

Kia is gearing up for the arrival of its all-new Niro, releasing a series of teaser images along with confirmation...