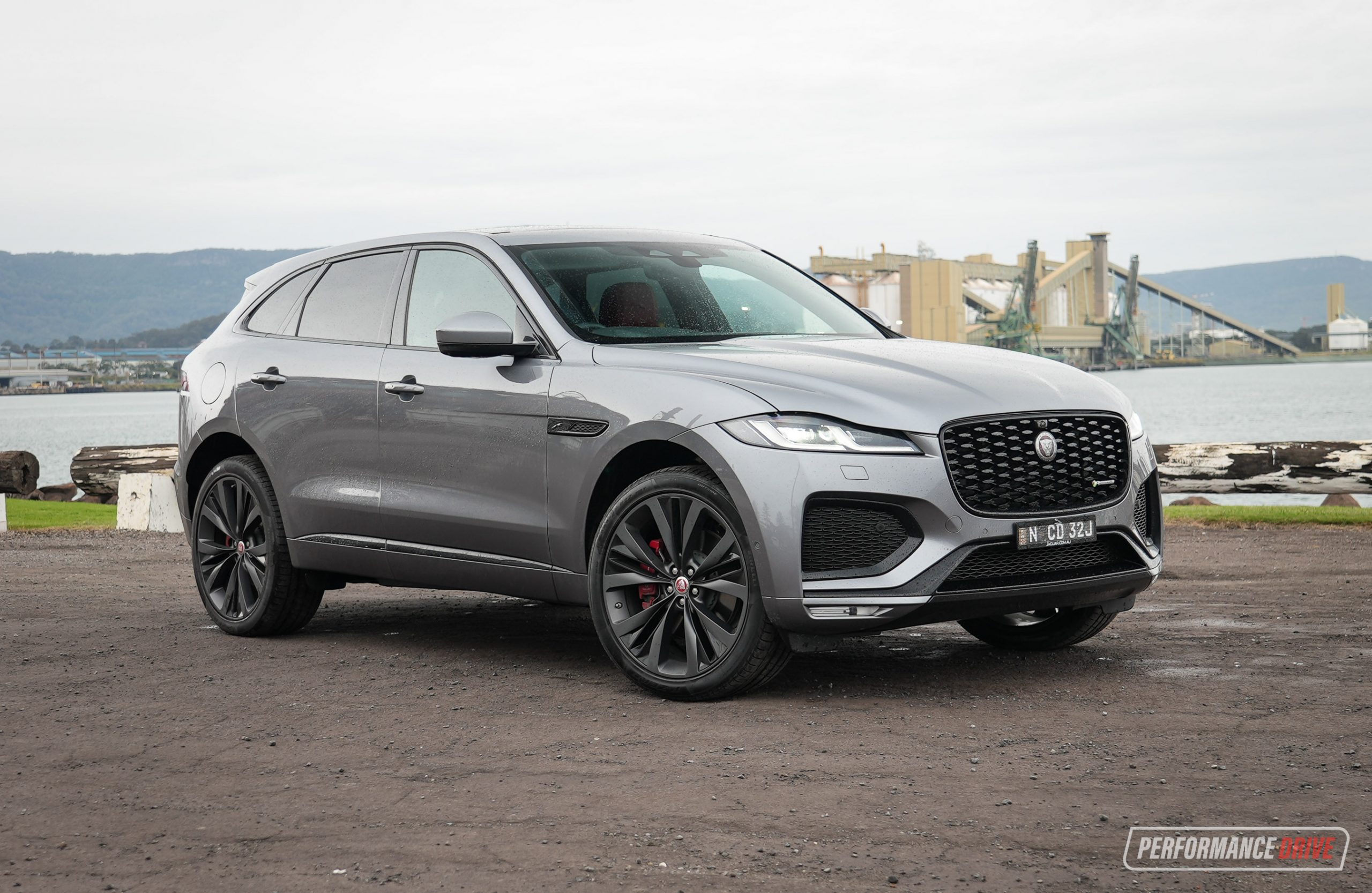 It’s not only an important model line for Jaguar, being the best-seller in the showroom, the F-PACE also sets trends in its market segment. It puts an extra dollop of ‘sporty’ in sports utility vehicle. Especially in the case of the new P400. 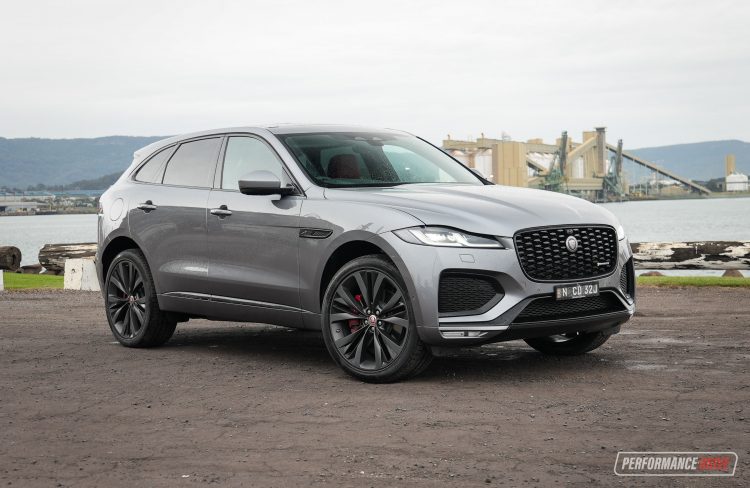 Sadly (in our opinion), Jaguar will soon only offer fully electric vehicles. From 2025, in fact. Vehicles like this need to be cherished while they are still around. You can get the latest F-PACE with a supercharged V8, called the SVR – it’s nuts – but we also feel a strong gravitational pull towards the P400 because it fits in with everyday life a bit better, and it doesn’t make you look like a drug dealer (as much).

The P400 utilises Jaguar Land Rover’s latest 3.0-litre inline-six Ingenium engine, featuring mild-hybrid technology. The unit is pressurised by a conventional exhaust-driven turbo and an electronic turbine. All up you have a class-leading 294kW and 550Nm at your disposal. 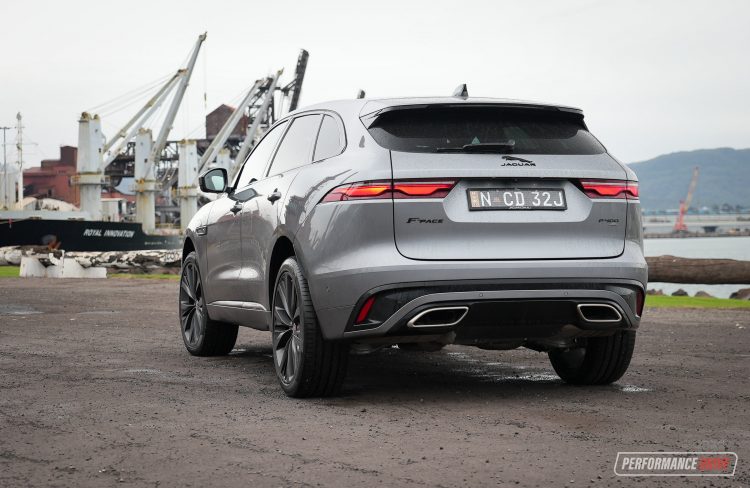 In recent times Jaguar Land Rover has reduced the availability of some options for lower-spec variants, to reduce showroom complexity. In short, buyers used to be able to spec a base S or SE model up to near-HSE calibre just through optional extras. Now, if you want all the gear you need to first start with the HSE. Makes sense to us. 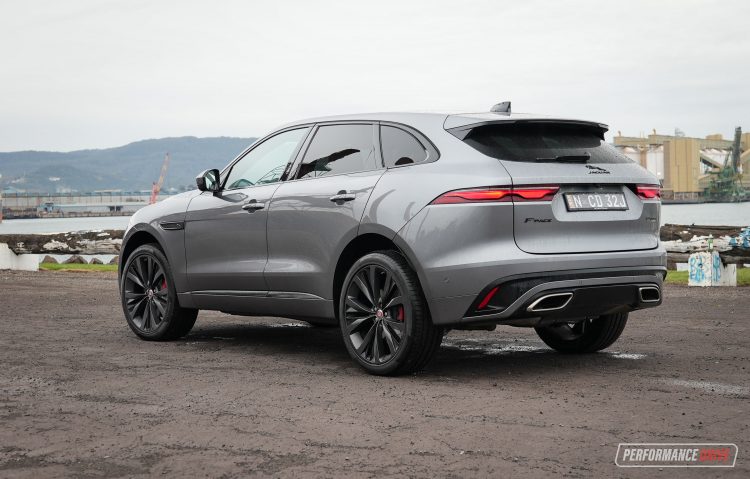 The interior of this example obviously stands out with its Mars Red grain leather package. But the big highlight for us with the 2021 model is the introduction of JLR’s latest Pivi Pro touch-screen media interface. It’s a beautiful screen. Curved, too, so there’s no annoying reflection. Measuring 11.4 inches, it’s certainly big enough, and it includes all the important apps and services, including Android Auto and Apple CarPlay. The loading times are drastically improved over the previous system and the graphics and colour options are a lot nicer, too.

It also includes some cool driving apps, such as low-traction launch for those slippery snowy drives, or mossy boat ramp hauls with the jet ski. Jaguar has also seen what its siblings over at Land Rover are doing and brought across an interesting ‘all-surface information’ program. Although, we doubt many owners will be taking this beast far off the bitumen. Of closer relevance is the Dynamic-I pages, which allow you to mix and match the adjustable driving parameters; sport suspension, comfort steering, eco engine, for example. 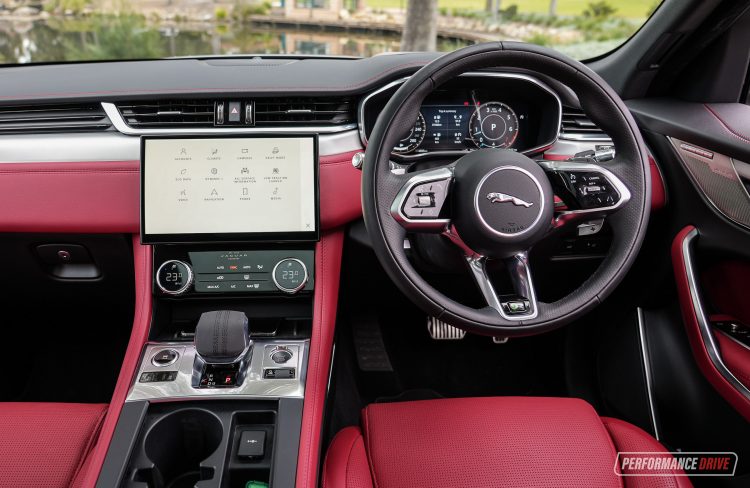 Jumping into the F-PACE immediately reminds us of a sports car. The A-pillar spears down low, for an SUV, giving it that purposeful and ready-to-jump stance. It does impede on head clearance when you’re stepping in, but you’d no doubt get used to it after some ownership time. Once you’re in, Jaguar puts together a great driving position. Perfectly aligned pedals and steering column, heaps of adjustment breadth through the steering column and seat, and focused forward visibility all spell driver’s car.

Rear seat space is a bit tighter than some rivals. Recently, the Australian Federal Chamber of Automative Industries moved the F-PACE up a segment, which means it competes with the likes of the Audi Q7, BMW X5, and Mercedes GLE. If you compare the rear seat area to those, the deficiency is much larger. A chunky centre driveline tunnel poking up saps middle seat legroom, and like with the front, access to the rear does seem a bit tighter through the doorway, with short doors and a low-ish roof. 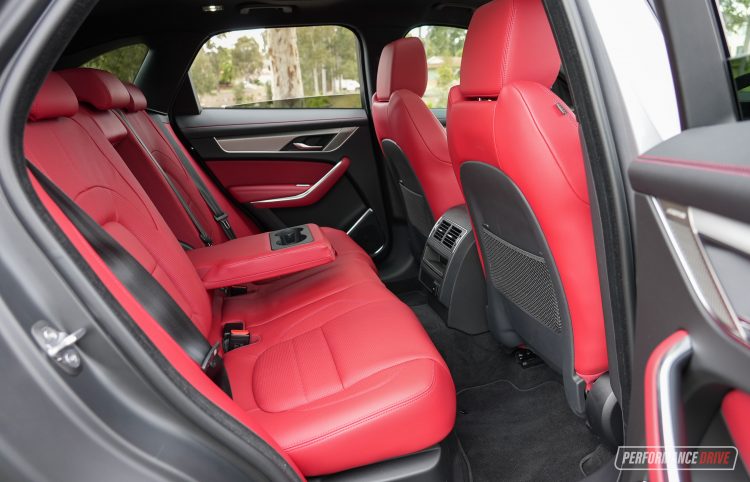 A huge 755-litre boot blows all of the mid-size rivals out of the water. However, if you use FCAI’s latest classification and pitch it against the large SUVs, that measurement isn’t all that impressive. Either way though there is more than enough space for a family’s worth of shopping or getaway gear.

Unlike some German rivals there is actually a spare tyre under the floor (no run-flats). It is a space-saver but it might be favourable to some given run-flat tyres haven’t had the best reputation in regards to ride comfort. 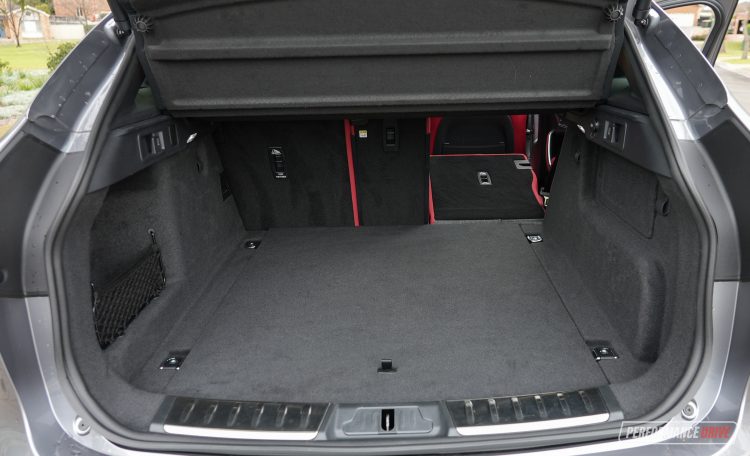 Lastly, we need to mention the optional activity wrist band (called Leisure Activity Key, officially). It does cost an extra $680 but we think it’s well worth it. Basically, it means you can leave the regular key in the car and instead use the slim, water-proof wrist band to lock it while you take part in whatever outdoor activities you’re in to. And it doubles as a watch. This is a great idea. In fact, we’re surprised makers of those fashionable dual-cab utes aren’t already onto it. 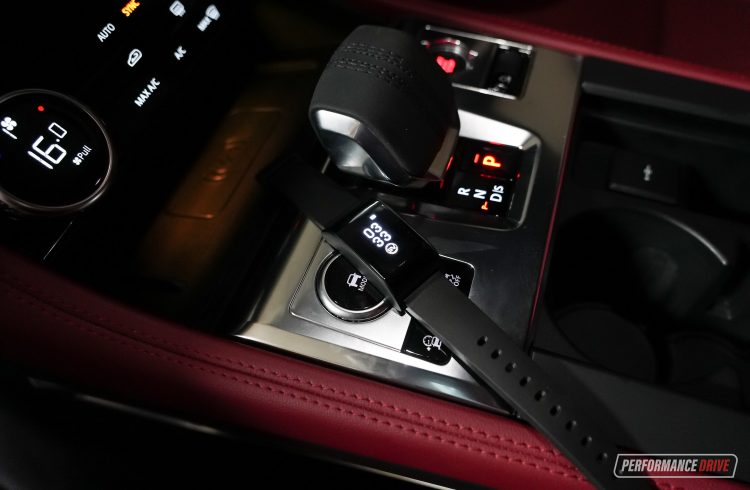 What an era to be alive. A twin-turbo inline-six in a practical SUV. The sound this unit creates causes goosebumps to ripple down your spine. Especially when listening from inside the cabin. There’s that distinct, deep straight-six howl that gets better and better as the revs climb which constantly has you interested. And it’s enjoyable to push the engine to its peak power zone, which is, surprisingly, all the way up at 6500rpm.

Considering the tare weight of 1899kg, torque is very important in terms of making the drive seem effortless and relaxing. So with 550Nm, which is heaps, available from 2000rpm and maintained up to 5000rpm, you really don’t need to press hard on the throttle to get things going. It wafts along and there’s a constant surge, an immense push from within that’s right at your foot.

In that sense, the P400, we think, is an awesome traffic-light racer. You’ve probably all been in this situation before. You’re at a red light. Your lane ends up ahead. What do you do? Push it hard and look like a bit of a hoon to get in font, or do you take the submissive route and just wait for traffic to flow past? Well, in this you can leap off the line but without seeming like you’re trying hard. The other motorist will also hear the esteemed sounds of your inline-six, and they’ll likely back off a bit and give you plenty of room to get in. 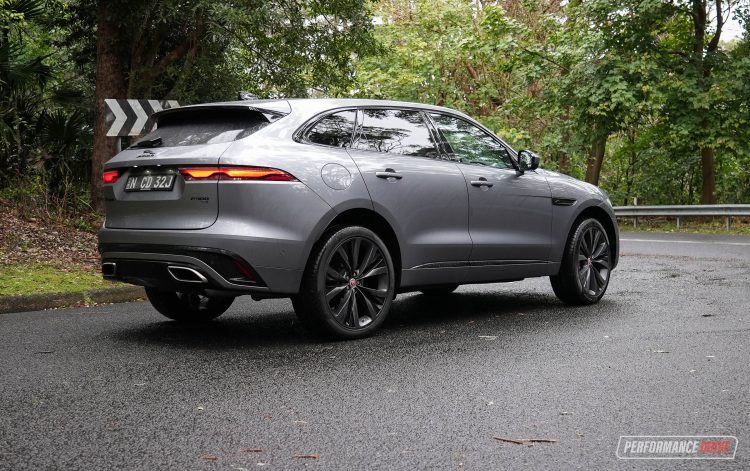 Around corners, the F-PACE does possess some body roll and lean. And, frankly, it can feel a bit top-heavy under certain pressures, in our opinion. But this depends how hard you’re pushing it. If you’re simply going for a leisurely drive and encounter some corners, such as in the country, you might experience this characteristic. If you push a bit harder though, flick it into Dynamic mode and actually let it know you mean business, it does respond with more vigour and poise.

The steering feel is really nice and fluid. There’s good levels of communication yet it’s not overly fussy or busy. Its smoothness also provides a relaxing touring capability, such as when humming down a motorway. It strikes a great balance in that sense. And the sporty three-spoke wheel further encourages you to head out for a drive just because. 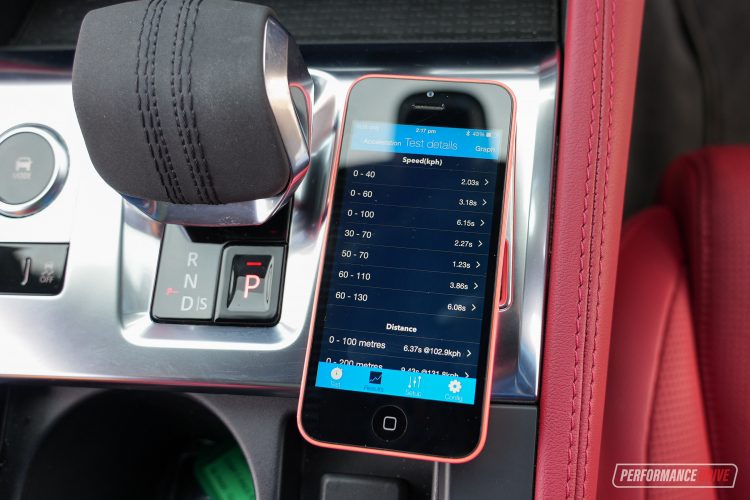 As for the performance, we clocked a best 0-100km/h in 6.15 seconds. That’s quite a bit off Jaguar’s claim of 5.4 seconds. As usual, we tried a number of take-off methods, including building the revs on the brake to try and provoke a startling and aggressive pounce off the mark. We’re not entirely sure why our time was behind the claimed figure.

Purely using the specs, calculations reveal it should be quicker. However, we can’t emphasise it enough; it does feel like a 5.4-second car as you drive it around. We think it’s purely down to its off-the-mark ability which hinders the specific 0-100 sprint time. Perhaps there’s a concentration on smoothness dialled into the transmission calibration that impacts the figures. Either way, it’s definitely quick enough to have some real fun and it sounds splendid doing so.

In terms of fuel economy, the official average is 8.7L/100km. That’s not bad in our view, particularly for a 300kW SUV. During our week behind the wheel we returned an average 0f 11.2L/100km. That might seem high but it is in line with the performance and weight – and the fact it’s AWD – for the real world. And our coverage includes running more than a handful of timed full-throttle tests. You could probably get it down to around 10L/100km after extended use in more normal scenarios. 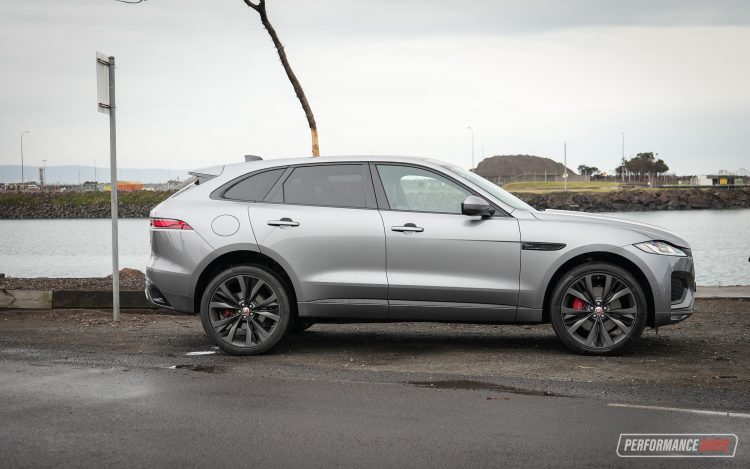 It’s a lovely vehicle. Jaguar’s recent improvements to the cabin design and integrated technology boost practicality, and the feeling of quality and luxury is immediately apparent the moment you step in. You can see where your money is going, in other words. We adore this P400 engine and think all mid-to-large cars deserve an inline-six. It’s just so smooth and velvety, with unassuming low-end grunt and glorious top-end power. We think it suits the F-PACE perfectly.

Things to consider include the low roofline and subsequent tighter door access compared with others in this class, as well as the fact it isn’t quite as quick as some lower-powered rivals (our tests and the official claims). Overall though, it’s a superb machine that should be on your shortlist if you’re in this space.

CONS:
– Not as quick as some rivals across 0-100km/h, despite the impressive power
– Tighter doorway openings than some rivals
– Feels heavy in the corners at times