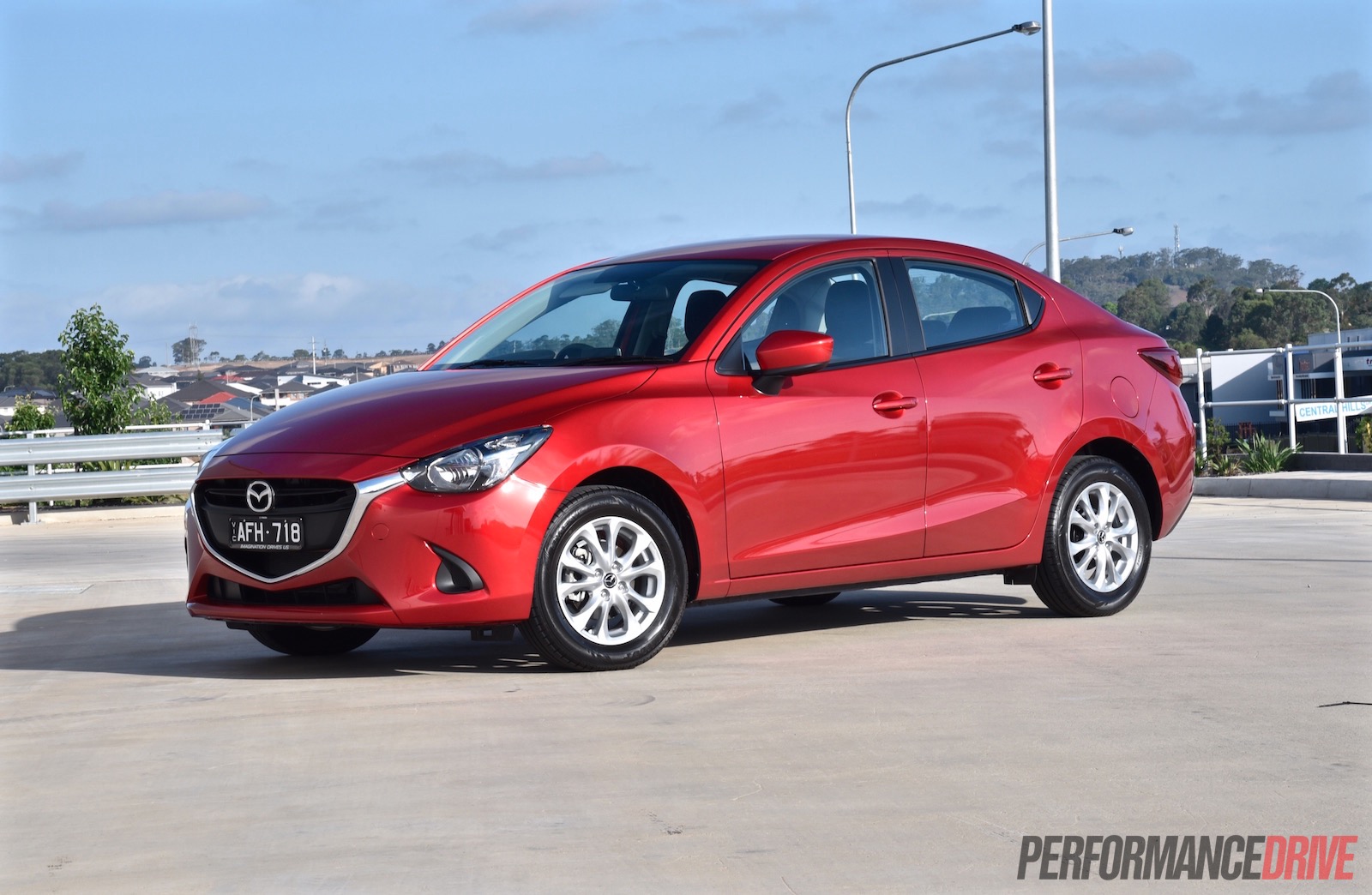 When it comes to aesthetics, small B-segment sedans are the automotive equivalent of those deformed fish creatures you might find in the Mariana Trench. Usually designed from the outset as a hatchback, a boot is generally tacked on to a cab-forward design, with the resulting afterthought looking unbalanced, under-tyred and more awkward than Larry Emdur rapping. 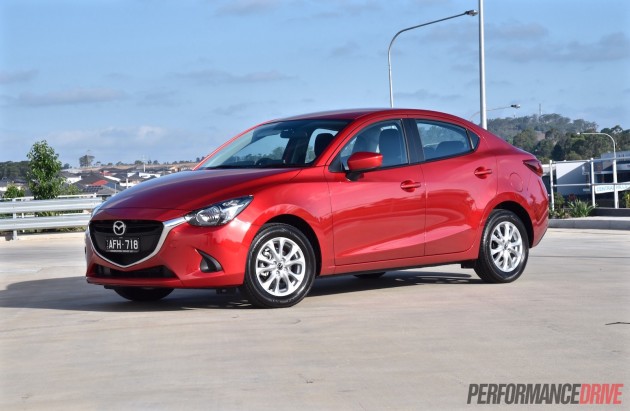 See first-gen Toyota Echo sedan, Mitsubishi Mirage sedan and even the last-gen Mazda2 sedan. The ungainly second-gen Mazda2 sedan carried a premium over its hatched brethren and did not find many friends. The newest-gen version, however, seems to have atoned for the sins of its predecessor; being both handsome, and carrying pricing equal to the hatch despite offering more boot space (440L vs 250L).

Mazda has been on a roll lately, ever since its divorce from Ford. Its SKYACTIV mantra extends from ultra-strong and lightweight steel chassis technology, to efficient, high-compression engines and transmissions. The 6, 3, 2, MX-5, CX-3, CX-5 are all products of the new, rejuvenated Mazda, and all consistently find themselves at the pointy end of the sales charts in Australia in their respective segments. 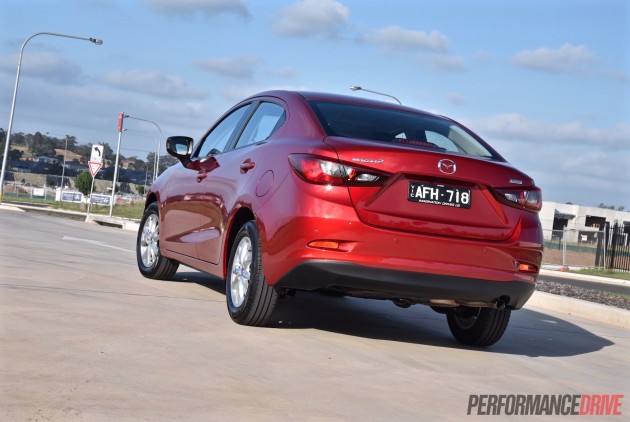 In eye-catching Soul Red (a $200 option), the 2 is a well-proportioned and attractive small sedan. You can see the tricks the designers have used, such as the athletic front crease that gives almost rear-wheel drive proportions, while a swage line flowing from the high boot to the front door handle balances out the rear end. There is a resemblance to the 3 sedan, and while the 15-inch wheels might look a bit dinky to some, overall, Mazda’s stylists have done a fine job we reckon.

Open the door and you find a sporty, interesting interior with fine quality materials. A premium-looking three-spoke steering wheel trimmed in leather is just the right size. In front of it sits an easy-to-read speedometer, with a pulsing ring as you enter. It is flanked, like a fuselage, by two digital displays containing tachometer, fuel and trip computer information. Throughout the interior you will find sporty yet premium touches, such as the circular vents, carbon-fibre lookalike plastic and polished aluminium surfaces. The VW Polo might offer better outright material quality, but its layout is a bit dour and conventional compared with the fun-looking Mazda2 cabin.

The highlight of the interior is the MZD Connect system. Similar to BMW’s iDrive and Audi’s MMI, the MZD Connect system pairs a seven-inch display with a rotary controller down near the gear lever, surrounded by buttons that make it intuitive and easy to navigate while driving. This is a user-interface that embarrasses the distracting hit-and-miss touch-screen systems in many far more expensive vehicles – which don’t let you input navigation addresses on the move, for example. The 2’s navigation system is great. It tells you when you’re approaching red light and speed cameras, and there’s a cool graphic when approaching a freeway exit.

Audio quality is decent from the standard six-speaker stereo, and the Gracenote-based USB and Bluetooth functions load promptly when starting the car. Buttons and controls feel solid and hard-wearing, with good fit and finish holding it all together.

The 440-litre boot is nicely shaped, with a low loading lip and a wide opening. The rear seats can also be folded down with an impressively wide hold opening up into the cabin. Speaking of which, rear seat accommodation is suitable for most adults, with the angled rear squab making the most of the available space. Headroom and legroom are adequate for this segment. 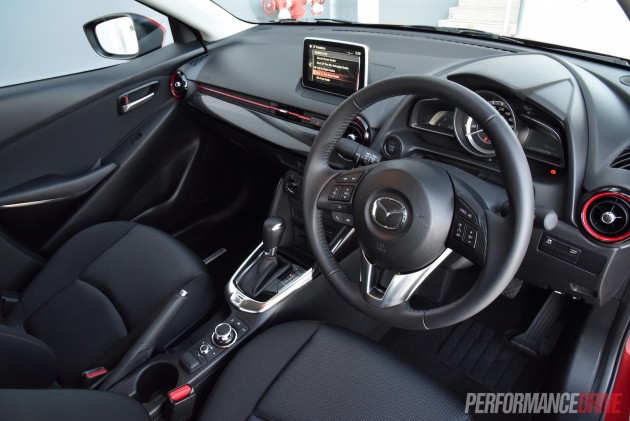 The Mazda2 is one of the more entertaining entrants in the light car segment, and the addition of a sedan rump doesn’t diminish that one little bit. The 1.5-litre engine feels efficient and up to the minute in its power delivery, refinement and throttle response. Here is an engine that makes the most of its 81kW and 141Nm, and every drop of fuel. While not an absolute firecracker, it’s eager enough to punt the 1035kg (tare) sedan around briskly.

Helping things along is a clever six-speed automatic. It keeps the engine in its sweet spot, with grade logic ensuring it doesn’t feel strained up hills. Pressing the Sport button under the selector means it will hold gears perceptively longer, while the manual mode is snappy to respond and adds another dimension to the drivetrain. For outright driver appeal however, we’d opt for the six-speed manual for its light clutch and superb shift action. From a standing start we timed 0-100km/h in 10.2 seconds, which, for example, matches what we achieved in the latest Toyota Yaris ZR rival (4spd auto, 80kW).

The steering feel is bang-on; it is linear and precise, coaxing you to explore the 2’s limits with confidence. Assisting in this regard is a balanced chassis. You can feel most of the weight centred behind the front axle, keeping body roll and understeer at bay.

In fact, with DSC disengaged, a sudden lift of the throttle will tuck the rear end in to sharpen your line. If you’re reading this thinking it sounds like a more expensive sports car, you’re right. In terms of absolute steering feel, the Fiesta may still have a slight edge in some specifications, but the Mazda2 offers more outright fun than the Fiesta in our opinion, and, therefore, the rest of the class.

The Maxx tested here features stop-start technology which switches the engine off during idling, when the brake pedal is depressed to a certain point. Operation is smooth and unobtrusive, and brings the 5.5L/100km rating of the entry-level Neo down to 4.9 for this model. An average of 5.9L/100km was achieved during our test – a rare instance where the real-world figure was close to the ADR one. This surely vindicates Mazda’s approach of fine-tuning normally aspirated engines, where rivals’ downsized and turbocharged engines seem tuned to give good results in the lab, but can’t get as close in the real world.

What we have here is the benchmark for dynamics, in-car tech and small sedan styling. We realise that having the most fun-to-drive car isn’t high on the priority list for some people, but it really enhances the overall ownership experience in the case of the 2. Being fun to drive keeps the car feeling fresh, and the Mazda2 sedan fulfils this part of the PerformanceDrive ethos. Nevertheless, in terms of running costs, quality, safety, fuel economy, refinement and ease of operation, the Mazda2 sedan would have to be the hottest property at this price point at the moment. Service costs are capped at $300 and resale value should be outstanding for this class.

Curiously, despite the extra boot space, Mazda expects the sedan to only account for 15 percent of sales. Either way you go, you get the same fun drive and rivals will no doubt be working hard to leap-frog it as we speak .

PROS:
– Quality feel with exciting design, inside and out
– Interior space/boot space (for the class)
– Driving dynamics
– Very economical
– Value and equipment

CONS:
– Not quite as attractive as cuter hatch