Genesis is one of the newest kids on the block now that it’s a stand-alone brand, separate from Hyundai. And while its first offering, the G80, competes in the large, luxurious limousine segment of the market, the G70 takes the fight to sporty sedans like the Audi A4, BMW 3 Series, and Mercedes C-Class. 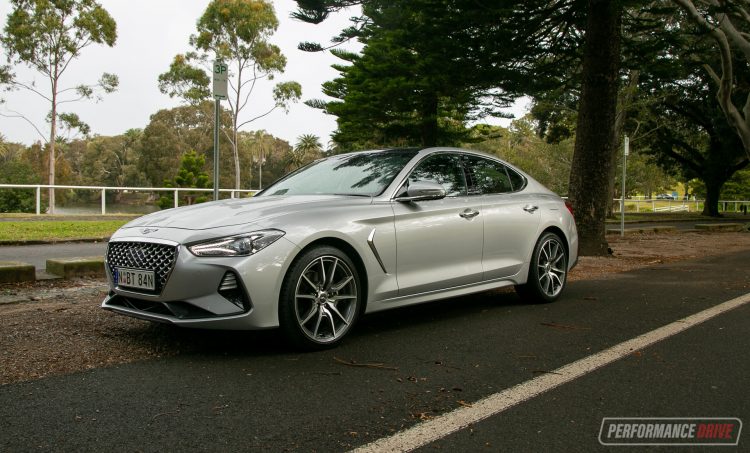 While purists may scoff, the G70 has a lot of things going for it, namely a new chassis, powerful four-cylinder powertrain, luxurious interior and one of the best ownership programs currently in Australia. How well does it fare when compared to its European rivals? Let’s find out.

* Figures as tested by PerformanceDrive on the day, based on 2.0T Sport variant. Factory claims may be different 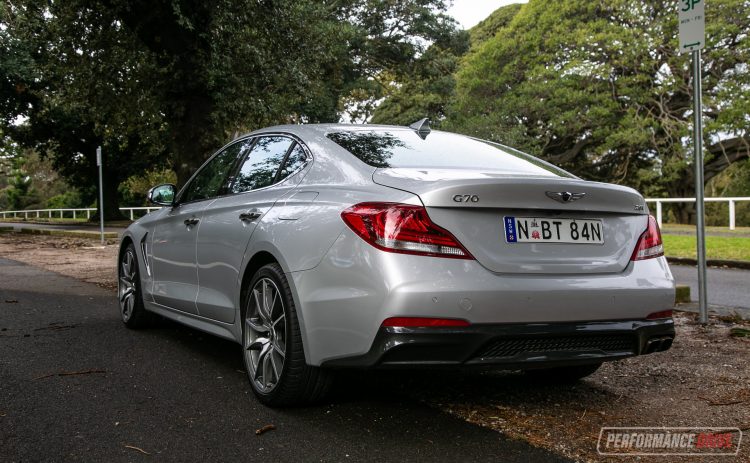 The G70 lineup kicks off with the base model 2.0T at $59,300, with our review car, the G70 2.0T Ultimate coming in at $69,300 before on road costs. For your money, you get a heap of equipment, like 19-inch alloys wrapped in Michelin Pilot Sport 4 rubber, a mechanical limited-slip differential, panoramic sunroof, Nappa leather interior with heated and ventilated seats, 15-speaker Lexicon audio system, revised suspension for Australian roads and a powerful four-cylinder turbocharged petrol engine.

You’d be forgiven for sensing a mix of Lexus IS and BMW 3 Series styling at the front, with possibly some Audi-inspired touches to the front grille. Around the back, the rear has some similarities to Mercedes’s design language, which we’re not complaining about… just observing, with hints of the Alfa Romeo Giulia. 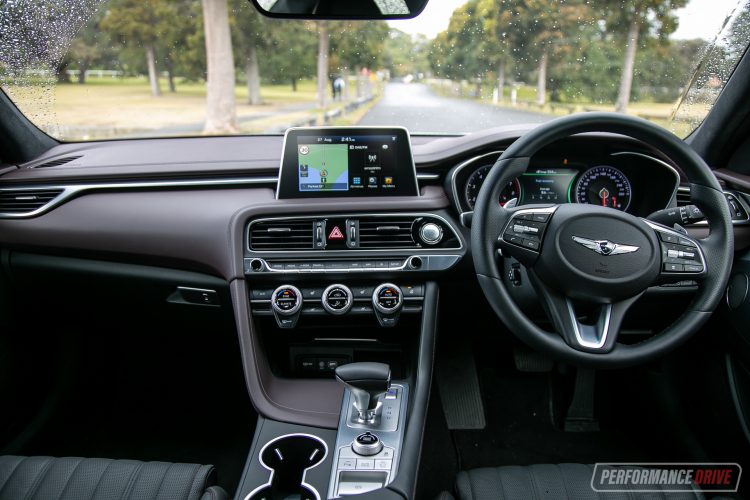 Inside, Genesis hasn’t tried anything too revolutionary with the styling, but the driving position does give you the impression that this is a car for the driver. The leather-wrapped and heated wheel is small and chunky, with paddle shifters tucked away behind. The front of the cabin feels intimate but not cramped. Occupants in the rear might not be able to agree with that as legroom is a bit of a squeeze, but nothing out of the ordinary for this class.

While Genesis is guilty of snatching a few parts from the Hyundai inventory, the G70 is by no means a half-baked attempt at a premium interior. The quality cross-stitched seats, swooping silver contrasts and brushed metal cluster for the gear lever would convince even the most cynical of Euro-fanatics. 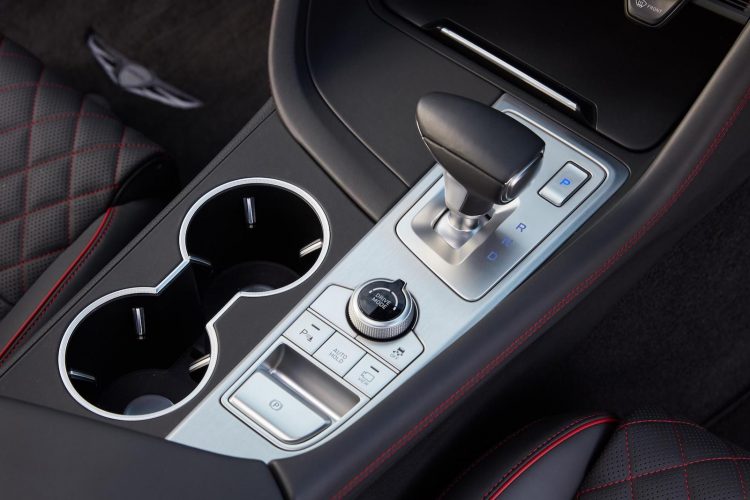 Thankfully, the G70 comes with Android Auto and Apple CarPlay connectivity – a noticeable absence in its bigger brother, the G80. And there’s also wireless phone charging, a handful of USB ports, and cubby holes to provide everyday practicality.

As per usual, there’s a host of intelligent safety features on offer including radar cruise control, blind-spot monitoring, autonomous emergency braking and cross-traffic alerts for the driver; the latter of which comes in handy quite often due to the bulky pillars in the mid and particularly the rear of the cabin.

In terms of the G70 as an outright practical offering, the limited boot size of 330L somewhat limits what you can throw in the back for a trip. This capacity is down compared with many of the rivals, which offer over 400L in most cases. 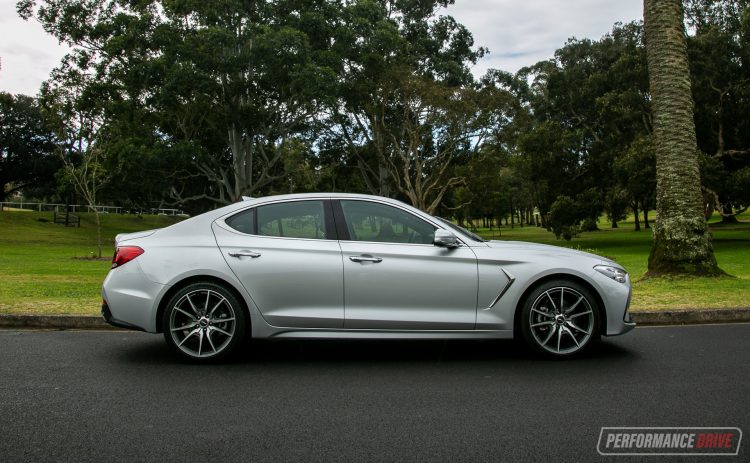 Now, to the main event. The G70 is powered by a 2.0-litre turbocharged four-cylinder unit which produces 179kW and 353Nm. Power is supplied to the rear wheels via an eight-speed automatic transmission, and there’s a limited-slip differential as mentioned to encourage that little demon lurking inside all of us – it also helps with grip on really slippery stuff. There’s all the makings of a sports car here.

Tipping the scales at just over 1640kg, there’s nothing inherently aggressive about the acceleration until you head north of the 3000rpm mark. It’s then that it takes off with that familiar turbocharged whoosh, aided by some witchcraft in sport mode which sends added acoustics into the cabin. Genesis claims 0-100km/h happens in a very respectable 5.9 seconds, however, the best we have achieved in the Sport variant with the same engine was 6.71 seconds. It’s brisk, and similar to a decent hot hatch, but you do need to push it. 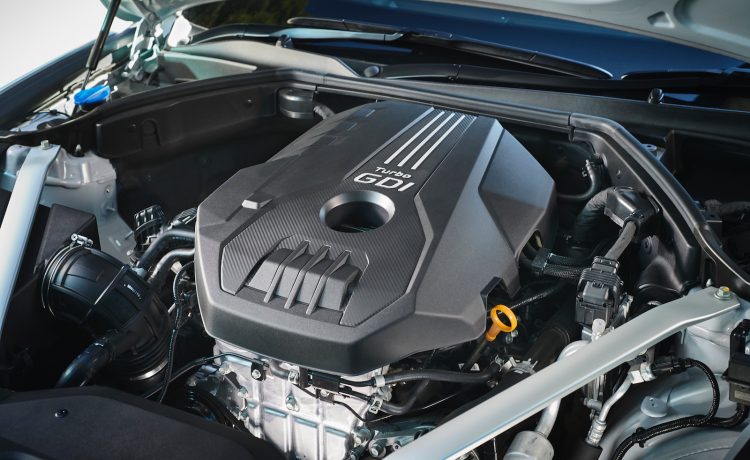 Maximum torque is spread from just 1400rpm and stays with you until 3500rpm. That’s a good range, But we find there is some turbo-lag in the real world which does seem to make it feel more lethargic than the figures suggest. In that sense, it is a smooth and refined luxury experience, the power delivery.

In the bends, the grippy Michelin rubber combine with the Aussie-tuned suspension to offer the driver an extremely engaging drive. The front end is full of confidence and remains planted under some serious mistreatment. And the same can be said of the rear end. It always feels firmly secured to the road, and Genesis has fit up staggered tyres widths for added balance and stability (225/40 front, 255/35 rear). With all of that grip, the platform seems underpowered; it’s no wonder Genesis also offers a 272kW twin-turbo V6. 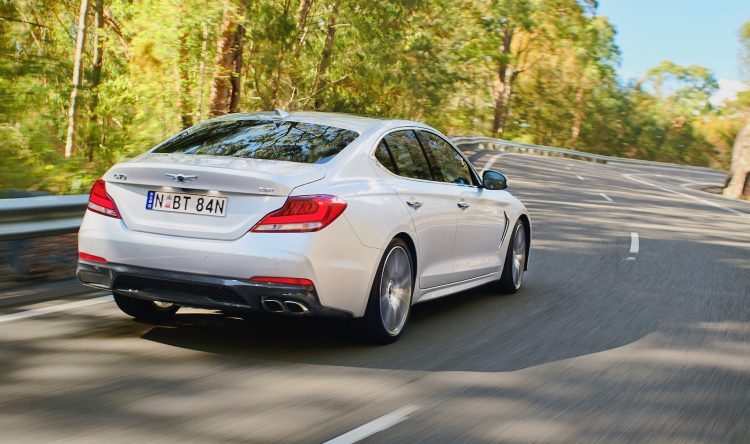 In the absence of a double-clutch auto, which Hyundai even fits to some of its more conventional models, the eight-speed torque convertor transmission installed here lacks the immediacy of its European rivals. During normal driving conditions it can sometimes behave a little confused, while higher tempo driving sees some minor lag in shift action when prompted manually. For an entry level powertrain though, it does the job.

On the work commute, the G70’s sporting credentials become somewhat problematic. Despite the fact that Genesis has tuned the suspension for Australian roads, we think it is too firm when you just want to cruise home in peace and quiet.

It’s quite thirsty for a four-cylinder, too. Over a week of city commuting and highway driving, we averaged 11L/100km, against the official rating of 9.0L/100km on the combined cycle. Compared with some of its rivals – be them European or Japanese – this number seems remarkably high for a four-cylinder. Even the official rating is high for what it is, particularly against the similarly-powered rivals.

We’re in two minds about the G70. On one hand it’s a capable sports sedan with a luxurious interior, and it comes with one of the best ownership programs currently in existence in Australia. On the other, it’s almost undermined by the capability of its chassis, because you know that it can handle a heap more power; the step up to the V6 makes a whole lot more sense.

In essence, what Hyundai is trying to do with the Genesis marque is reminiscent of what Toyota does with its Lexus brand. While we wouldn’t necessarily opt for this specific G70 variant, we are very impressed with what Hyundai/Genesis has managed for a first attempt at the harsh and firmly-established mid-size premium sedan market.