The BMW i8 EfficientDynamics sports car will be launched on the market in 2013. Now we learn a BMW i8 Spyder version could also be on the way, as these leaked concept images purport to prove. 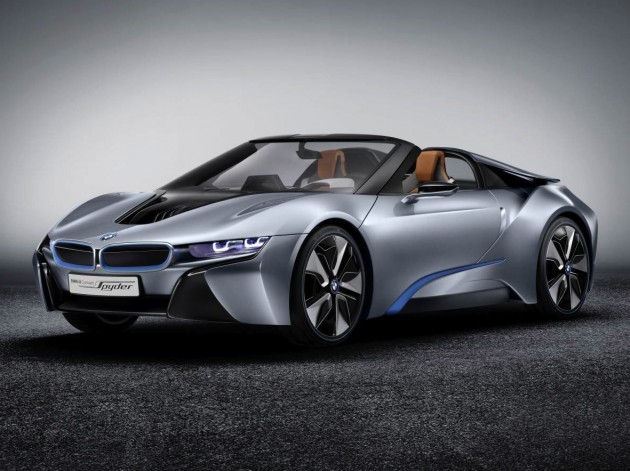 There’s been no word of a potential drop-top version of the plug-in sports car, so these images certainly come as a surprise. The images were first picked up by AutoForum.cz, and show a clear open-top design in the new i8 layout.

The BMW i8 concept in 2+2 coupe form was unveiled at the 2011 Frankfurt Motor Show. This Spyder version appears to look much the same, except the rear seats are removed to make way for a buttress-style mid section.

Power is likely to come from the same 1.5-litre turbocharged three-cylinder engine as seen in the i8 coupe. The engine is matched to an electric motor system which does most of the propulsion. Combined power is 260kW and 550Nm – good enough for 0-100km/h in 5.0 seconds.

This BMW i8 Spyder concept will reportedly make its official debut at the 2012 Beijing International Auto Show, starting April 23. We’ll keep you updated with official word as soon as we hear more.

UPDATE: BMW has confirmed the new BMW i8 Spyder. Full specifications below: