If you ever wanted to do a big burnout in a large SUV, the 2012 Jeep Grand Cherokee SRT8 is a great place to start. Here we see how a rear-wheel drive conversion can help make that happen. 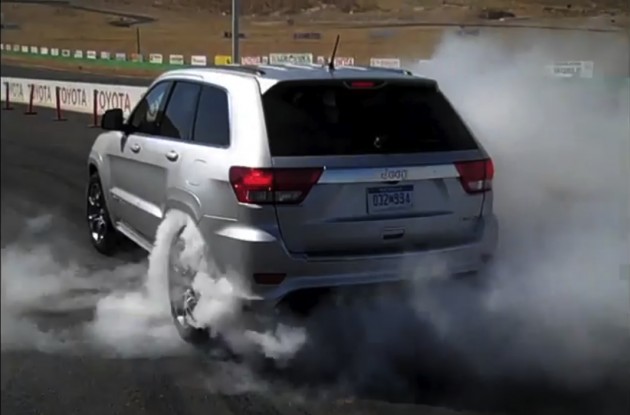 The 2012 Jeep Grand Cherokee SRT8 is fitted with a comprehensive electronic four-wheel drive system. In ‘Track’ mode, up to 65 percent of the SRT8’s power is sent to the rear wheels. Jeep says that up 100 percent of the engine’s power can even be sent to a single wheel, in certain circumstances.

All of this electronic torque-split adjustability got enthusiastic engineers wondering, could the ECU and the transmission’s electronics be manipulated to send all of the power to the rear wheels only? The answer lies within the awesome smokey burnout video below. Take a look.

The 2012 Jeep Grand Cherokee SRT8 is the fastest Jeep ever produced. It scores a 6.4-litre HEMI V8 engine (up from the 6.1-litre) capable of unleashing 347kW (465hp) of power and a whopping 630Nm of torque. The mighty engine has the potential to sling the big SUV from 0-100km/h in just 4.8 seconds and onto a quarter mile time around 13.5 seconds. It’s basically the beastliest off-roader currently on sale in USA.

The new 2012 Grand Cherokee SRT8 will go on sale here in Australia during the first half of next year. Prices are expected (but not yet officially) to be in the same range as the previous 6.1-litre 2011 Jeep Grand Cherokee SRT8, which kicked off at around $86,000.