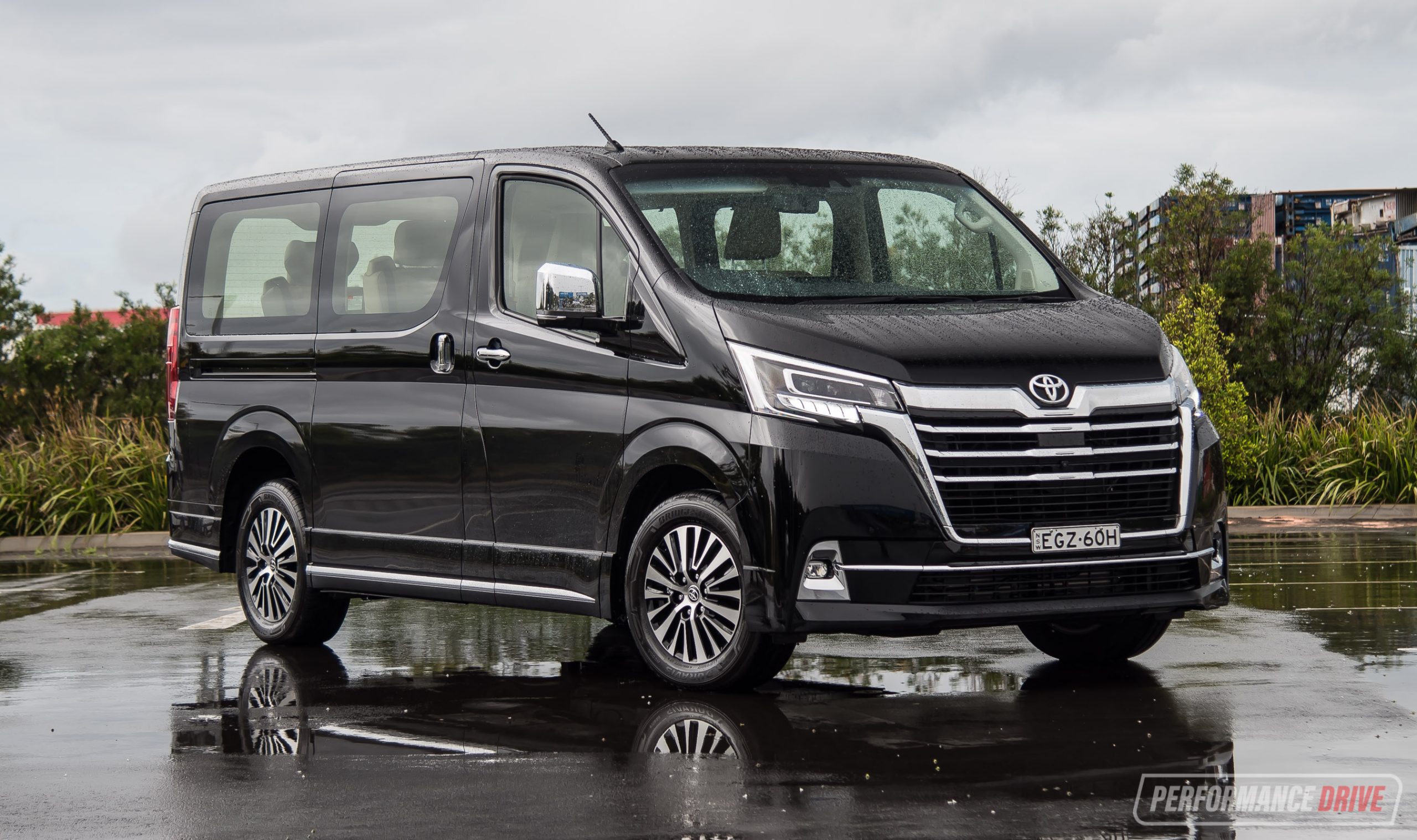 Who could possibly forget their great aunty Jane’s humble old Toyota Tarago in the ’80s and ’90s? Sadly, that nameplate, and probably that exact van, has been put to rest. The good news is that Toyota has not left us high and dry with no people-mover Down Under. We can still create fun memories of Aussie road trips with the entire family (and perhaps some extended family) with the new Toyota Granvia. Here, we’ve done exactly that, taking one from Sydney to the Gold Coast to put it through the all-important road-trip test.

The 2020 Toyota Granvia fills the market gap of the Tarago that once was, but it differs in its underpinnings. Based on the latest Toyota HiAce, it’s rear-wheel drive and uses a full ladder chassis. And that helps to provide more space inside than the trusty ol’ Tarago. You can buy it in six-seat or eight-seat configuration, with just two main variants; the base, plainly named ‘Toyota Granvia’ and the Granvia VX.

Prices begin at $62,990 for the base model and rise to $74,990 for the top VX (plus on-road costs) – there is no price difference between six and eight seats in the VX. We’re testing the VX six-seater. Both variants get the same 2.8-litre four-pot turbo-diesel engine matched to a six-speed auto transmission. The VX adds a premium 12-speaker Pioneer sound system, electrically-adjustable seats for all except the front passenger seat (odd omission), heated and beautifully presented quilted leather seats (no heating for the front seats, oddly), captain/ottoman style second and third row seats (except in the 8-seater – only the second row gets these), rear sun shades, 360-degree parking camera, powered sliding side doors, and a more luxuriously presented interior with more storage options. Even before you step into this beast you realise what a luxury monstrosity it is. It towers over you at nearly two metres tall, 5.3 metres long and nearly two metres wide. It’s hard to make something as spacious as this not look like a box on wheels, but there are some elegant LED lights and chunky chrome elements to break up the square shape.

Getting into a big vehicle can be difficult, but this one is surprisingly easy. There are huge automatic sliding doors that open up a large section of the cabin to make it easier to climb in and out of. If only you could mute that awfully loud alarm when the sliding doors are in operation. They will definitely wake up the neighbours on late night arrivals home. Climbing in and out is also simple thanks to a step on the side of the body, and plenty of grab handles to hang onto. Access to the third row is made easy thanks to an aisle-like gap down the middle – unless you’re using the handy centre console box and tray like us. When sitting in one of the many captain’s chairs on offer you’ll be genuinely surprised by how much space you have around you. And it’s all adjustable on rails so you can maximise space where you need it most. There are many spaces to store your belongings around you as well. There’s a huge bucket console with a tray table on top in the middle of the first two rows, cupholders everywhere (x10), nifty flip-up pockets in the armrests, and no less than seven USB ports and two 12-volt power outlets.

The six-seater has an abundance of luggage capacity, especially when you slid the third row towards the front. During our trip we were able to fit in six large suitcases. The only issue is the boot lid is huge, heavy and springs up forcefully. Some users might struggle to open and close the tailgate. Maybe a power-operated one should be made available.

In terms of warranty, Toyota now offers a generous five-year, unlimited kilometre warranty. But servicing is required quite frequently, at every six months or 10,000km (whichever comes first). The Granvia doesn’t have a lot on its side when it comes to performance on the road. It’s heavy (2665kg) and is not the most aerodynamic of shapes. Though, you’re not really concentrating on your quarter-mile timing when you’re in such comfortable settings. On paper, the 2.8-litre gives out 130kW at 3400rpm and 450Nm from a very low 1600rpm. We timed the 0-100km/h sprint in 12.36 seconds. Yes, it’s not great, but it’s not trying to be. And when you have a full load, that torque does well to conquer long uphill strides.

We also found the six-speed auto very helpful in maximising the power band available in the Granvia. It changes gear smoothly and at the right time to create a more comfortable ride. Pair that with the overall very smooth and quiet engine, and you’ll find it does handle most situations comfortably. The powertrain’s weakest point would have to be its higher-speed overtaking performance. It just doesn’t have the grunt 0r the lungs to transition from a gallop to a sprint. Travelling through the country on the New England Highway, through towns like Muswellbrook and Tamworth, we really enjoyed the Granvia’s excellent comfort and peaceful in-car atmosphere. The seats are a delight to recline in and take in the country serenity, and the clear visibility and luxury tones really help to reduce fatigue – none of that cramped-up, restless feeling. It really makes a difference being able to spread out and stretch your legs.

It’s no surprise that the suspension and dynamics match the rest of the car. Everything is soft for the purpose of creating a luxurious and calm adventure. The country route we took could bring out the worst in cars, with lots of uneven roads and potholes to dodge. Even with its size, bumps are a smoothed out well. Toyota likes to equip its cars with tall-walled tyres, which also helps bump absorption. Sharper corners tend to sneak up on you in the low populated roads where signage is scarce. And it’s here that you can feel the tyres and suspension trying hard to keep you grounded, but its high centre of gravity can’t be hidden. As to be expected from a van.

The steering is also appropriately weighted, and it’s not like driving a bus where you have to rotate the wheel a million times to get it to turn. Braking performance is also confident, yet soft in pedal feel. Only when you reach a dead stop you feel a slight back and forth rocking. Although that could be attributed to the flexible suspension.

Our test was mainly made up of winding country roads with inconsistent speeds, and some open highways, and all with a full car load. So, our average consumption of 9.7L/100km isn’t too bad, especially considering the vehicle’s weight. We think the 8.0L/100km official average is commendable, and attainable given the right circumstances.

For our east coast adventure the new Toyota Granvia VX proved to be an absolute winner, for all passengers. Australia is a pretty awesome place to have landmarks like the Big Banana, and Gold Coast beaches to make driving holidays worthwhile. Sometimes, the best part of a holiday is getting there. And with the Granvia’s space and unequivocal comfort, we can’t help but think, why fly?

PROS:
– Gold class luxury and comfort for every seat in the house
– Lots of space and storage for all passengers
– Not as cumbersome to drive as it looks
– Smooth, quiet and mostly refined diesel engine
– Five-star ANCAP safety

CONS:
– No power front passenger seat, or heated seats in the front (even though they are in the back)
– A little more oomph wouldn’t go astray, especially with a heavy load
– Incessant beeping for the electric sliding doors
– Huge rear tailgate is heavy to pull close yet flings up in your face when opening