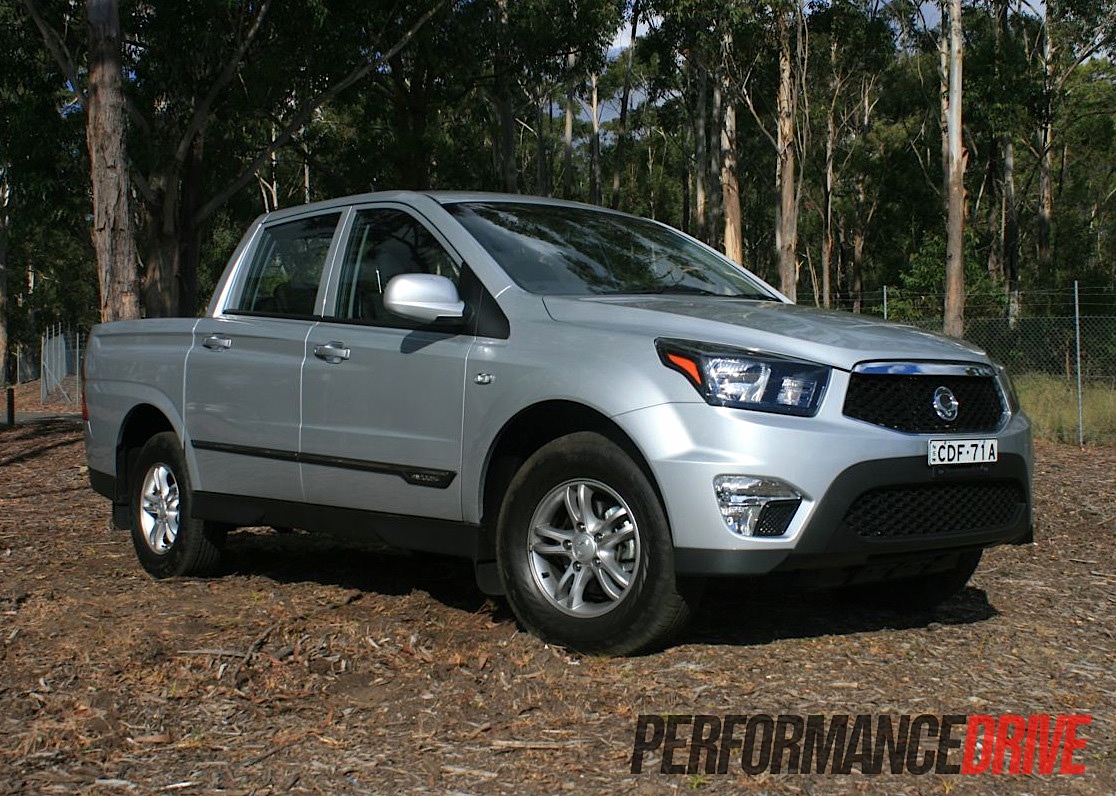 We know what you might thinking, made in Korea and all that… However, the new 2012 SsangYong Actyon Sports SX has stepped up a notch. It features decent front-end styling, and it comes with a smooth new fuel-efficient and powerful turbo-diesel engine. It’s also very light on the old hip pocket. But still, it’s a SsangYong, is it worth spending your hard-earned money on? 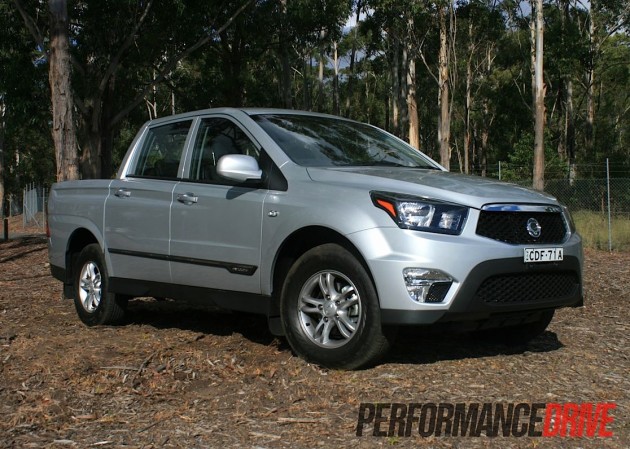 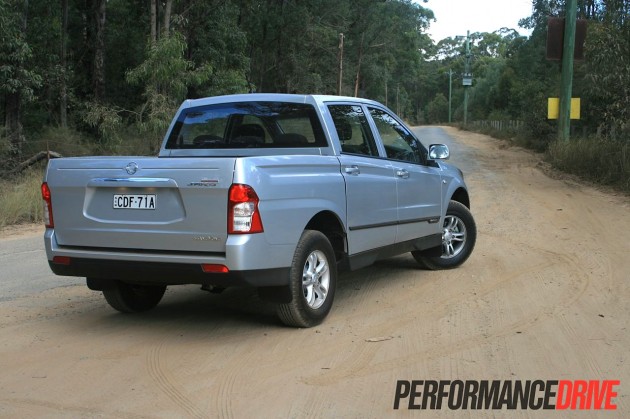 In Australia, the sports dual-cab ute market segment is very popular. Last month, 8945 4×4 utes were sold, making up 11.3 per cent of the overall market. It’s no wonder really that more and more options and brands are becoming available in this segment.

The 2012 Actyon Sports ute supersedes the old pointed model, and the rather wonky-looking SsangYong Musso Sports. It’s been designed to steal sales away from the other budget sporty dual cab ute offerings, such as the Great Wall V200 and the Isuzu D-Max.

Under that new nose sits a 2.0-litre turbo-diesel engine producing 114kW of power and 360Nm of torque. It’s matched up to either a six-speed manual, or a six-speed automatic. It’s also available in two-wheel drive and four-wheel drive.

If you know your utes, you’ll notice these specifications are pretty good. Compared with the market-leading Toyota HiLux diesel, which offers 126kW and 343Nm from a larger 3.0-litre turbo-diesel, the SsangYong is not too shabby. Most rivals only get a five-speed auto option as well. 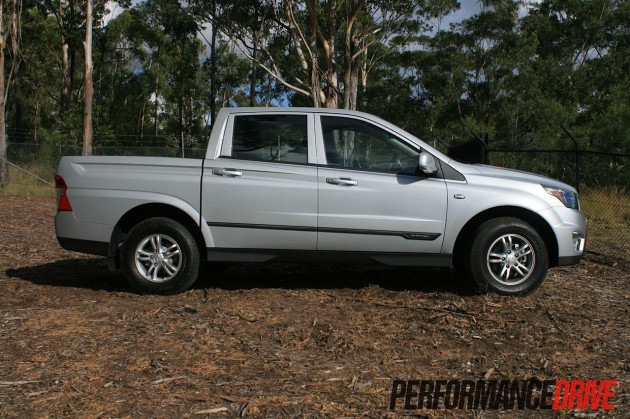 Before we start comparing it with all the bigger boys, we have to understand the Actyon Sports is not as heavy duty or as capable overall; it isn’t designed to be as rough and rugged. It’s also much cheaper, with this mid-range SX kicking off from just $31,092 for the manual.

Instead, the Actyon Sports is designed for those who aren’t necessarily in need of the complete versatility of one of the veterans, but are still lured by the appeal of a sporty dual-cab with a big bucket in the back. And of course driven by a tough turbo-diesel engine.

The example you see here is the 4×2 SX with the six-speed auto. It sits in middle of the three-model lineup. The range-topping SPR is only available in 4×4 guise and comes with added luxury and equipment, while the base model Tradie is the raw workhorse version. 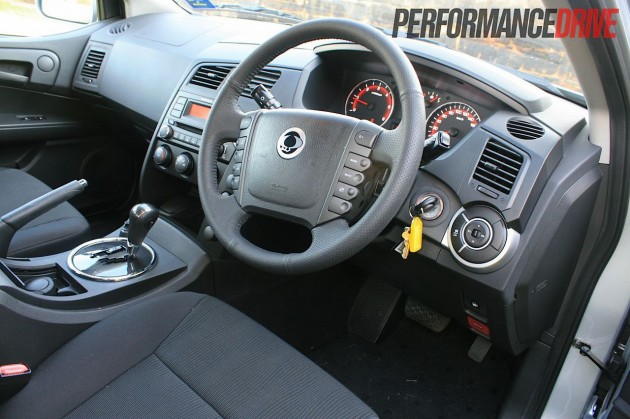 Jumping into the Actyon Sports you instantly realise this is a high-riding vehicle. The window sills are very low too, so that stand-over vision is accentuated even more.

All the materials in the cabin are of reasonable quality, with the dash and door skins covered in a robust yet soft rubbery trim. There are signs of ‘cheapness’ though. The clock appears to have been quite literally squashed into a gap in between two vents, and you aren’t exactly swarmed by features and buttons waiting to be fondled. 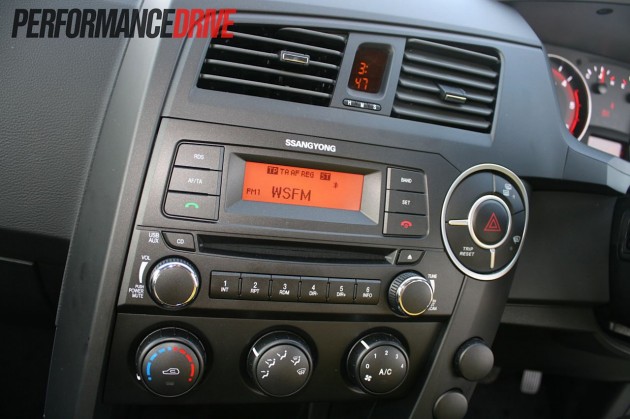 We found it a little difficult finding a comfortable driving position, as the steering wheel is only rake adjustable, not reach. It almost feels like a van in some respects, with the wheel sitting at stomach height and on a slightly sloped angle.

Apart from these quibbles, the interior is a nice place to be. It’s very quiet out on the road, and we were surprised at its comfortable cruising nature. There’s very little road noise coming through into the cabin, while the engine, once up to speed, sounds refined and subdued; the turbo whistle is louder than the engine in most situations. (We’ll get to more on the drive experience down below.) 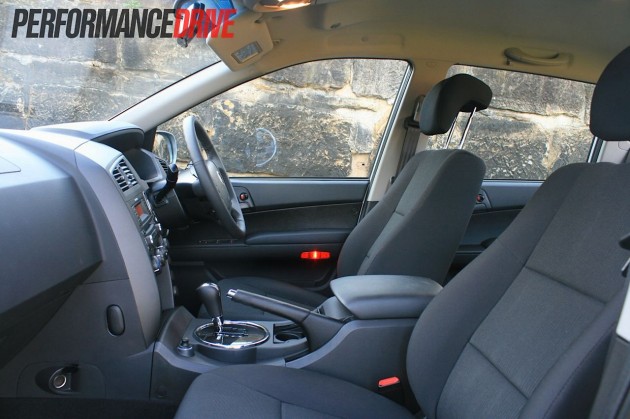 The rear seat back is not in the direct upright position, which is a refreshing change for this segment. Instead, it’s a little laid back for a more relaxed drive. 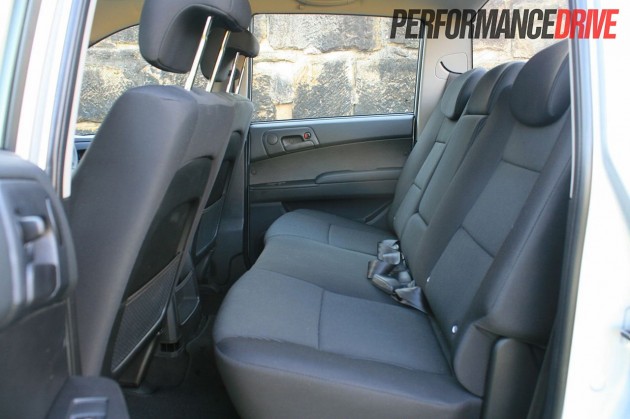 In the very back you get a deep and wide but rather short tray, measuring 525mm in depth, 1600mm in width, and 1275mm in length. The length doesn’t compare too well against the double cab market leaders; HiLux 1520mm, Triton 1505mm, Narvara 1511mm.

A quick Pythagoras calculation of width and length will give you a diagonal length of 2050mm. This means it would be quite difficult to cart around toys such as a dirt bike, of which require roughly 2150mm. (Toyota HiLux diagonal length; 2150mm, Mitsubishi Triton; 2100mm, Nissan Navara ST-X; 2170mm, Isuzu D-Max; 2060mm.)

The Actyon Sports does offer good approach and departure angles, at 25 degrees for both, which is better than some of the rivals. 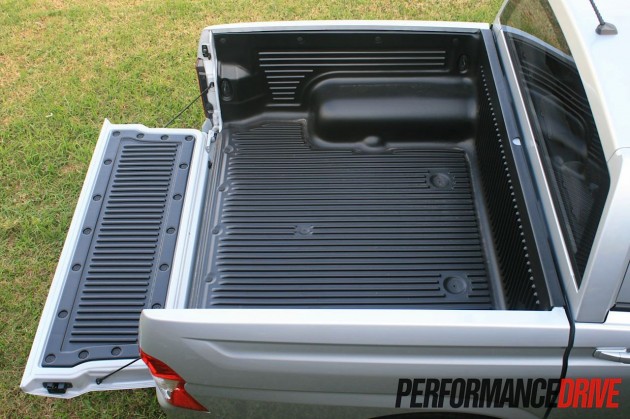 The exterior design is really a love/hate affair. In our opinion, from some angles, it looks quite solid and modern, while from others, such as the rear quarter view, the back end rises up too high and the rear wheels sit too far in the guards.

It is a massive improvement over the previous SsangYong models though, again, all in our opinion. We did notice that during our time with the SX, passersby and other motorists liked to have a bit of a gander at the Actyon. It does stand out as something different. 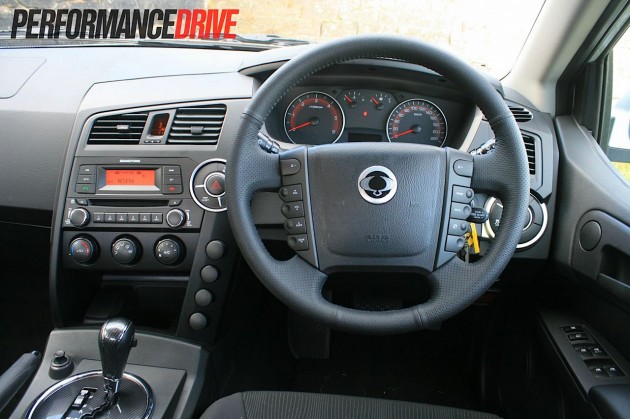 The problem with entry-level vehicles is that they, more often than not, aren’t as safe as the more expensive rivals. The previous model SsangYong Actyon Sports ute has been tested by ANCAP and was rated three stars. The rating is one star under most of the leading rivals, and one star ahead of the Great Wall V series ute.

Steering the Actyon Sports SX through a series of bends isn’t as bad as you might think. There is some body roll up to a point. Once the point is reached, the Actyon stays acceptably composed.

The steering is evenly weighted, and gives reasonable levels of feedback. The turning circle of 6.2 metres is not too bad either. When actively thrown into a tight corner, the ute pivots around with reasonable confidence, and with no front tyre squeal or immediate understeer.

We feel the main concern with the handling is the suspension. It is rather bouncy and jiggly, even for a ute. If you’re touring around a long bend and hit a road join, or one of those metal highway joins over a bridge, the Actyon will bump steer and shift across a fraction. This could be isolated to our test vehicle however, as it did have 4000km on the clock, likely made up of vigorous testing. 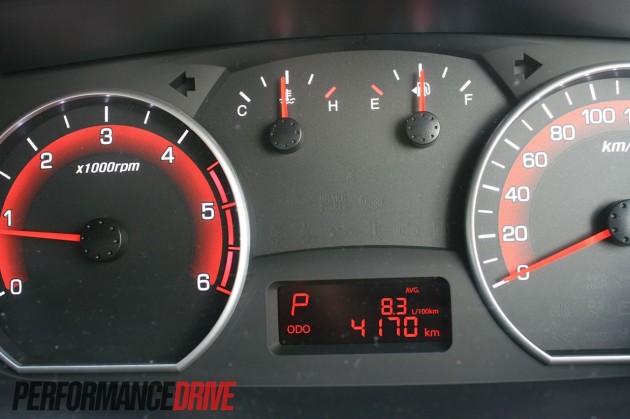 Out on the freeway, the Actyon is comfortable and quiet. You could easily rack up plenty of kilometres in one of these. The 2.0-litre engine, despite pulling a 1935kg package, doesn’t feel like it’s working too hard at all. The 360Nm of torque means overtaking is rather effortless once on boost. We timed 0-100km/h in 10.1 seconds, which is more than satisfactory in this segment.

Since the engine is only a 2.0-litre, it’s able to merely sip fuel on the go. We averaged around 8.5L/100km, while the official ADR combined rating is just 7.6L/100km for this specification. Up to 800km from a single tank (75 litres) is easily achievable.

The six-speed automatic works well with the engine, changing gears at the right time, and not changing up too early like some vehicles. There is a tap-shift manual mode available by slotting the gear lever over into M, however, we found it to be quite slow at responding to your inputs; best to simply leave it in D. 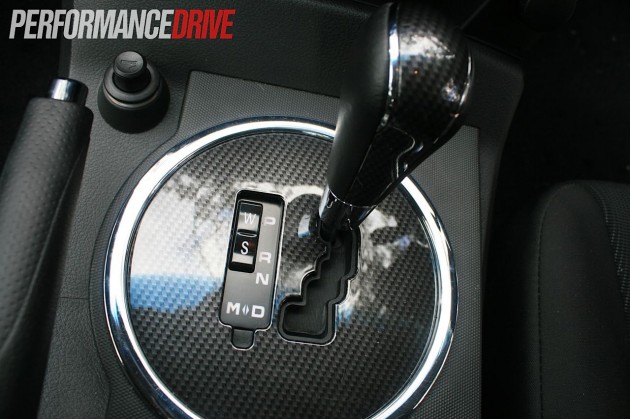 With its high ride height, 188/212mm (front/rear), even the 4×2 model can be taken off road to a certain degree. It features fairly aggressive off-road tyres too. Obviously, you can’t expect to get too far, especially in the wet. For that the 4×4 would be better suited.

One thing even the 4×2 could do with is a limited-slip differential. The inside wheel does like to freespin a bit, even just exiting a dirt driveway for example, with the traction control on.

If you’re actually planning on getting down and dirty with regular off-roading, and/or carrying loads of equipment on a regular basis, such as dirt bikes, the more expensive rivals are better suited.

If all you want is a practical, sporty, high-riding dual-cab ute, and you don’t care about brand image and all of the superficial cache, then the Actyon Sports SX is a great proposition. It’s comfortable, quite, and very fuel efficient, and isn’t too bad at getting up and going when you put your foot down.

The trump card of the new model is of course that price tag. It terms of bang for your buck, replacing ‘bang’ for ‘practicality and efficiency’, the Actyon Sports SX is certainly one to look into. 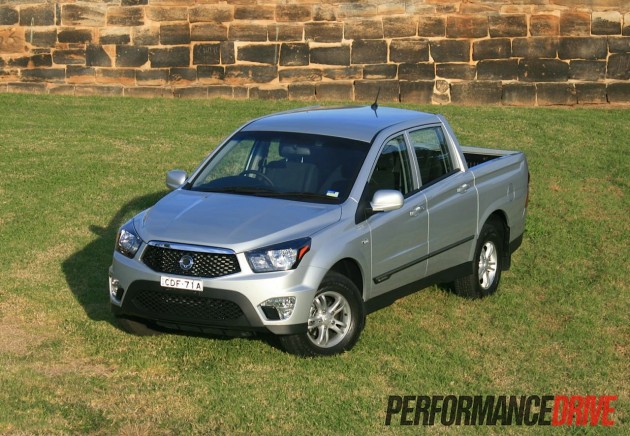