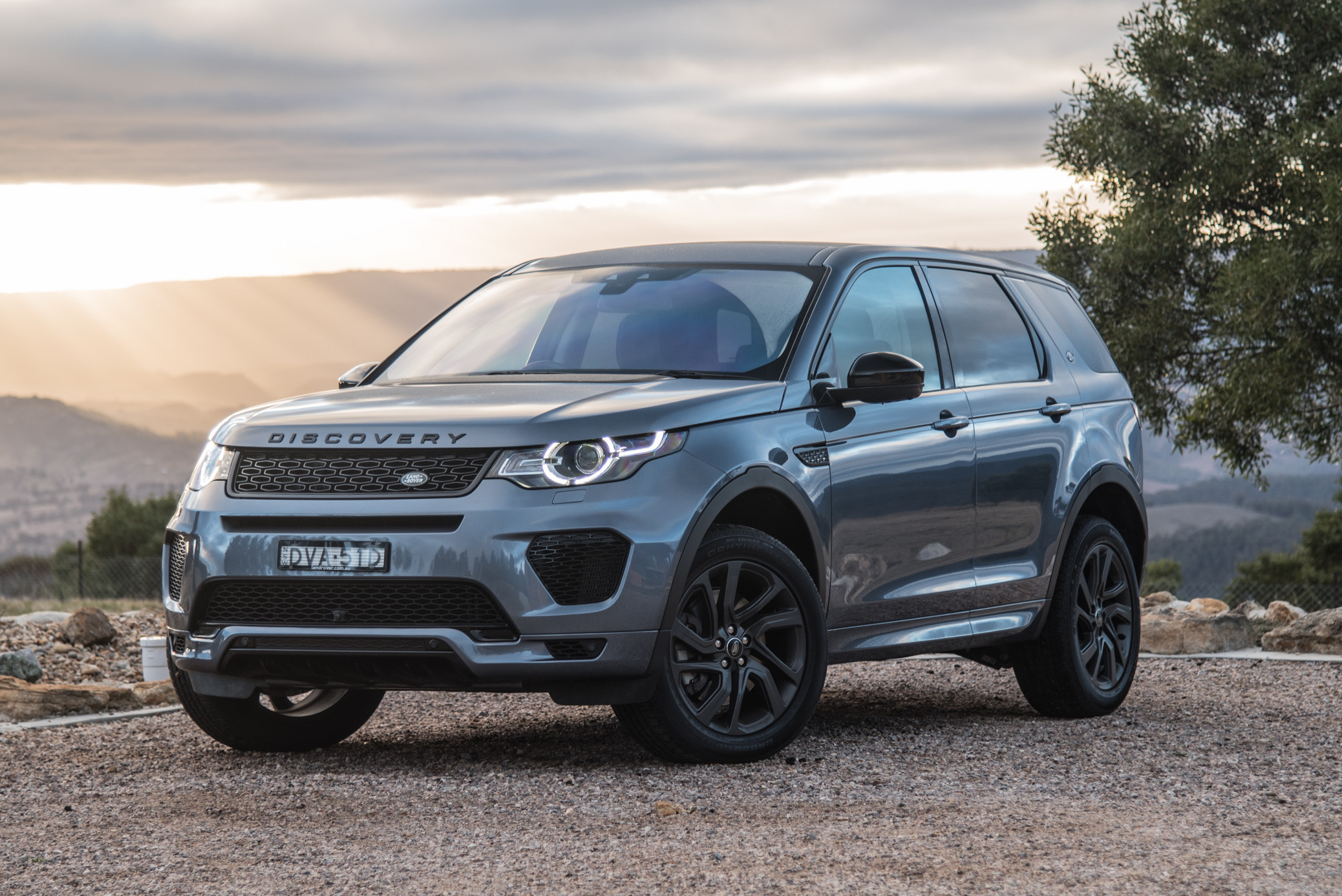 Diesel SUVs used to be all the craze but now it seems petrol engines are becoming almost as efficient, and thus increasing in demand. Is the 2018 Land Rover Discovery Sport Si4 petrol one you should consider? Or are you better off going for the diesel options? 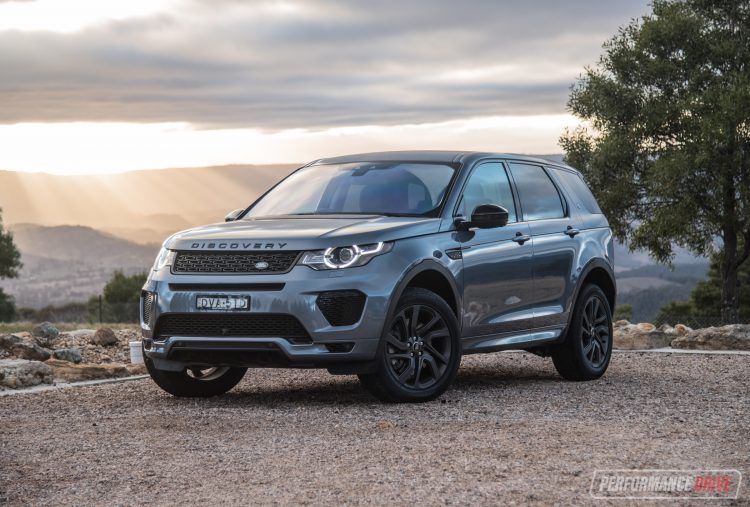 Land Rover’s latest engine lineup for the Discovery Sport is impressively extensive. All fall under the name Ingenium, and all are very economical, turbocharged four-cylinder units. You might remember we recently tested the flagship Sd4 diesel, which produces 177kW and an immense 500Nm. Its official average fuel consumption is stamped at 6.4L/100km.

Under the bonnet of the Si4 variant is also a turbo four-cylinder, however, the petrol version produces a giddy 213kW and 400Nm. With a big jump up in power over the Sd4, fuel consumption is higher, as you might have expected, rated at 8.2L/100km. Though, at this rate it’s actually not too far off some small hatchbacks that don’t produce anywhere near as much power, or haul as much luxury and weight as this.

The Si4 is placed at the higher end of the range, available in SE trim only. There are plenty of options available to help spruce up the exterior and interior, such as the fashionable black pack. Prices start at $70,858 for the Si4 SE, although with options the price can easily go north. This example as tested is priced from $84,408. (All prices exclude on-roads). If you stack it up against the equivalent variant-level competitors, the pricing isn’t too bad. In fact, even with options the Land Rover is good value in comparison. 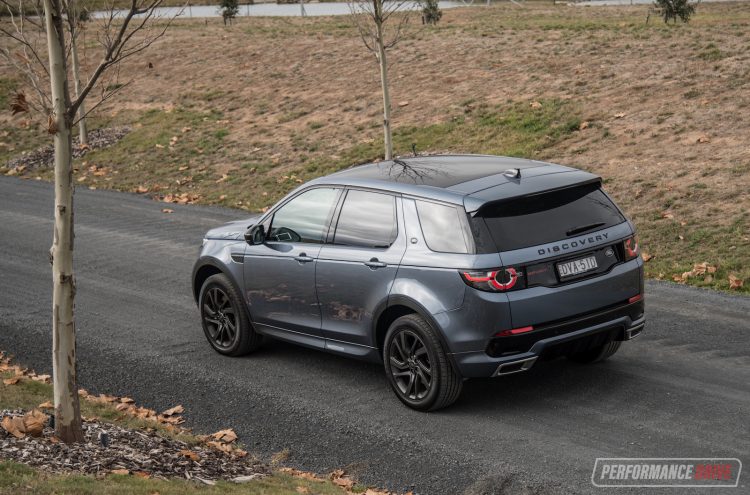 It really is just like a smaller Ranger Rover inside. You’ve got tall captain-style chairs in the front providing exceptional comfort, with easy ingress and egress thanks to nicely measured up seat platforms. Once you’re in, you’ve got a very Range Rover-like seating position. This is a vehicle you sit on rather than in. The traditional low window sills amplify this.

This doesn’t mean it’s not a cosy place, though. With a wide centre console and high dash, there is some hunkered-in character to be enjoyed. Those looking to buy an SUV because they want a high-riding, commanding position and an enhanced feeling of security will love the Discovery Sport, in that sense. 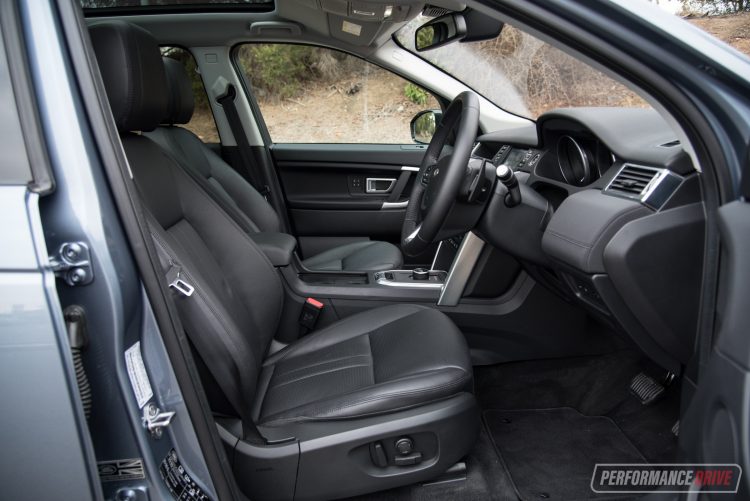 Seating space is plentiful. In the front there’s good legroom and space to move about, with a tall ceiling giving you plenty of head clearance. Rear seat space is also abundant for this segment, and you can opt for seat heating and full climate control services in the back. Unfortunately for growing families, the seven-seat option is not available for the Si4. But, all rivals in this class are not offered with seven seats at all; it’s a bonus that some Discovery Sport variants are offered with seven seats.

Okay, so now to the options. Being a product of Jaguar Land Rover there are quite a few things to select from. Some of these things should be standard we think. Such as the InControl Connect media interface. The Si4 is fairly high up in the range, and it should come with Land Rover’s best media system as standard in our opinion, as is the case with most rivals. Blind-spot monitoring should be standard at this level too, but it’s optional, and surround-view monitoring is optional despite coming as standard in most of the equivalent rivals. 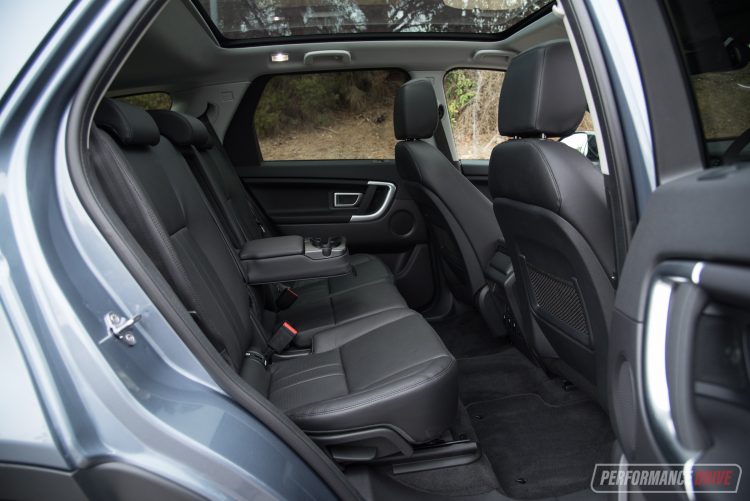 Packing for a weekend away is made easy thanks to a very generous 981L boot, which is expandable to 1698L. This blows most rivals out of the water. You can tell it’s prepared to go anywhere, with a 12V socket mounted in the cargo area wall, and four tie-down hooks and a removable pull-out blind making it a very versatile machine.

What we like most about the interior and packaging is the sheer practicality, with multiple power sockets around the place and lots of room, as well as the lovely design. Check out the climate control cluster on the dash. That’s how you present such controls. A lot of carmakers make this rather simple function such a frustrating experience with complex controls. Land Rover presents an elegant, well-designed set of controls that’s also immediately understandable. A lot of the design cues in here actually come from the Ranger Rover brand, which can only be a good thing. 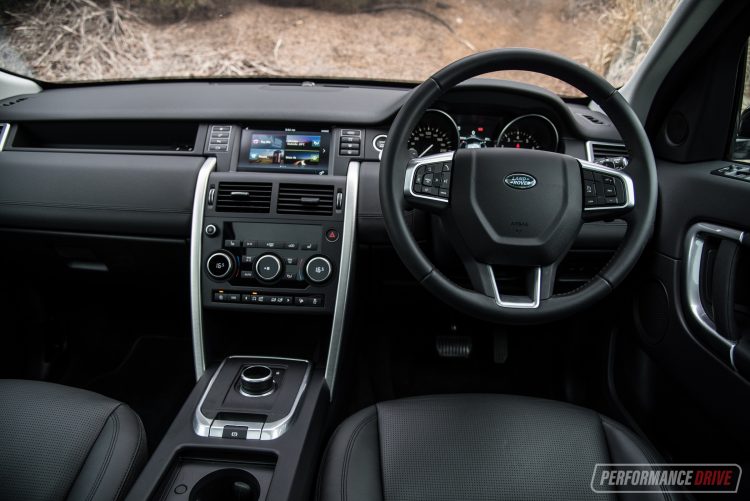 At 213kW and 400Nm, the Si4 is the most powerful 2.0-litre turbo in its class. For example, it easily trumps the BMW X3 30i which produces 185kW and 350Nm. Peak power is reached at just 5500rpm, which means you don’t need to rev the rear end out of it to experience its potential. Maximum torque is also available from just 1500rpm, which makes it an effortless runaround in the city. That immediate torque also helps when off-roading.

What isn’t so impressive is the acceleration. Land Rover claims 0-100km/h comes up in 6.7 seconds, and going back to the comparison mentioned, the less powerful X3 manages it in a claimed 6.3 seconds. We put this down to the weight difference. The Land Rover tips the scales at 1835kg, while the X3 xDrive30i is just 1673kg. Our testing using a Racelogic Vbox returned a best 0-100km/h of 7.39. It does take off in second gear by default even in S mode, although selecting first manually returned slower times for us. 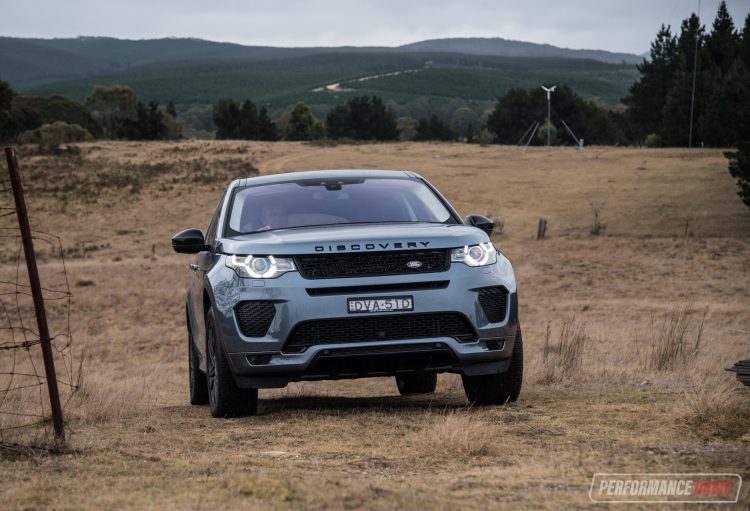 Our main gripe with the driving behaviour is the nine-speed auto. It delays and jerks around a lot, confusingly selecting gears. For example, if you turn into a normal right-angle side-street in the normal driving mode, the transmission will try to pull you around in fourth gear (we tested this by flicking to manual mode mid-corner to see what gear it was in). The engine revs can drop so low the engine feels like it’s about to stall. So then you apply just a smidge more throttle and it suddenly kicks down two gears and gives you too much acceleration. It’s just not a very smooth unit in our opinion, and perhaps needs further calibration.

Out on the road the Discovery Sport feels solid and reassuring. You can feel some of the Range Rover pedigree, especially with the tall seats and high driving position. You can feel the centre of gravity is higher than in some rivals too, including its sibling rival, the Jaguar F-PACE. Even so, the Disco Sport does feel somewhat playful and enjoyable down a twisty mountain road. There is a bit of body roll but stability and suspension compliance around bends is excellent.

In the city this is a very easy vehicle to drive. The tall profile and seating position provides brilliant visibility, and the external proportions aren’t overwhelming, so it is a breeze to park and thread through tight streets. Checking over the rear blind-spot can be backed up by blind-spot monitoring technology as mentioned, but this is a $1573 option (packaged with rear cross-traffic alert and reverse collision warning). 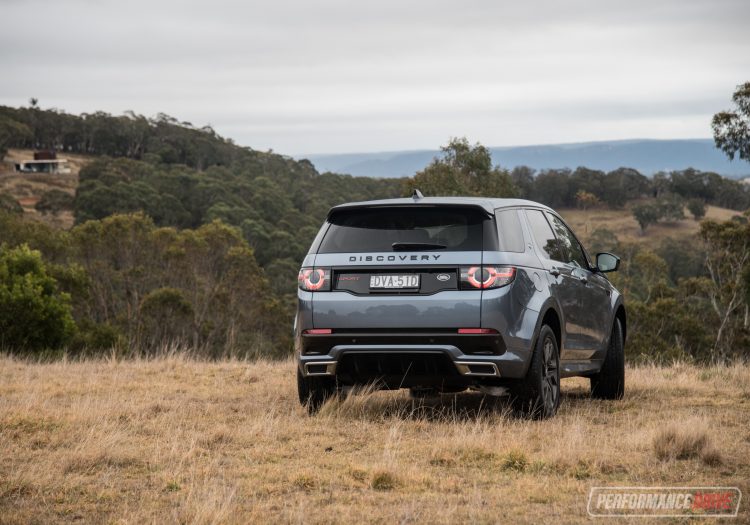 What we love most about this vehicle is its ability and willingness to get out into the wilderness and enjoy the outdoors. The moment the wheels venture off the tarmac, it’s like a pig in the mud; it instantly feels at home. While there might be some body roll around energetic bends, the upshot is superb ride comfort and of course suspension travel when the going gets rough.

During our test we had access to a large property in the Blue Mountain where we could explore the Disco’s off-road performance. There are a range of driving modes that you can select from, but in our occasion, we found leaving it in auto mode to be the best option. Unlike many SUVs on the market, the Land Rover’s all-wheel drive system is constant and not on-demand. If you’re experiencing any wheelspin it’s because you’re on something very slippery indeed.

Up steep wet grassy sections (the steepness doesn’t show in the photos) the Land Rover offers remarkable progress. It is relentless. The towering ground clearance of 221mm, with a 600mm water wading depth, and 23.4-degree approach and 30-degree departure angle set benchmarks in the class. There’s no doubt in our mind, the Discovery Sport is the most adventurous and most capable off-road option in the segment; against Audi Q5, BMW X3, Mercedes-Benz GLC, and Volvo XC60. We like that you can specify smaller alloy wheels and large tyres too, helping it really live up to Land Rover’s extensive all-terrain heritage. 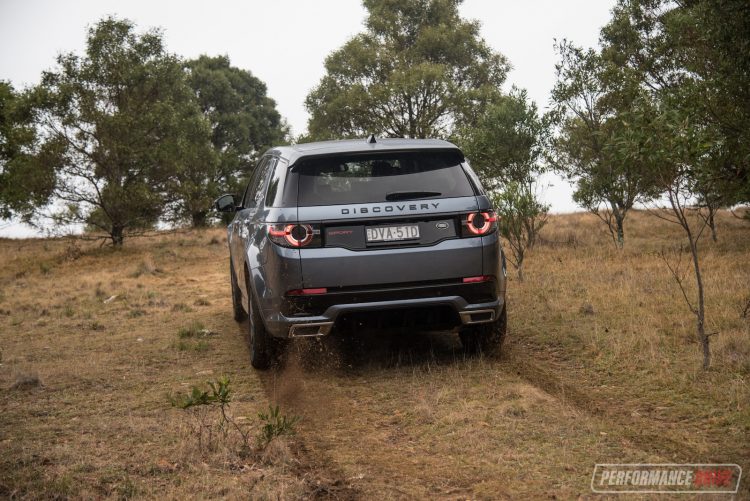 So to answer the original question, should you consider the Si4 over the diesels? If you’re after a bit of power and speed, then yes, we think the Si4 is the way to go. It is noticeably punchier than the diesels, especially the lower-grade variants. We also think it sounds kinda cool from the inside, and the fuel economy isn’t too bad – during our test it averaged about 10L/100km.

As a proposition to consider in the mid-size premium SUV market, the Discovery Sport remains as the best performer off road. There’s no doubt about that. The interior practicality is also something many competitors can’t match, and the design inside and out is quite attractive. About the only areas that might require consideration is the nine-speed automatic which isn’t exactly the smoothest transmission in the class, and the sheer number of options. These are obviously very minor niggles that might only affect us picky observers.

CONS:
– Heavy for a petrol model
– 9-speed auto delays and can be jerky
– Lots of options and personalisation possibilities