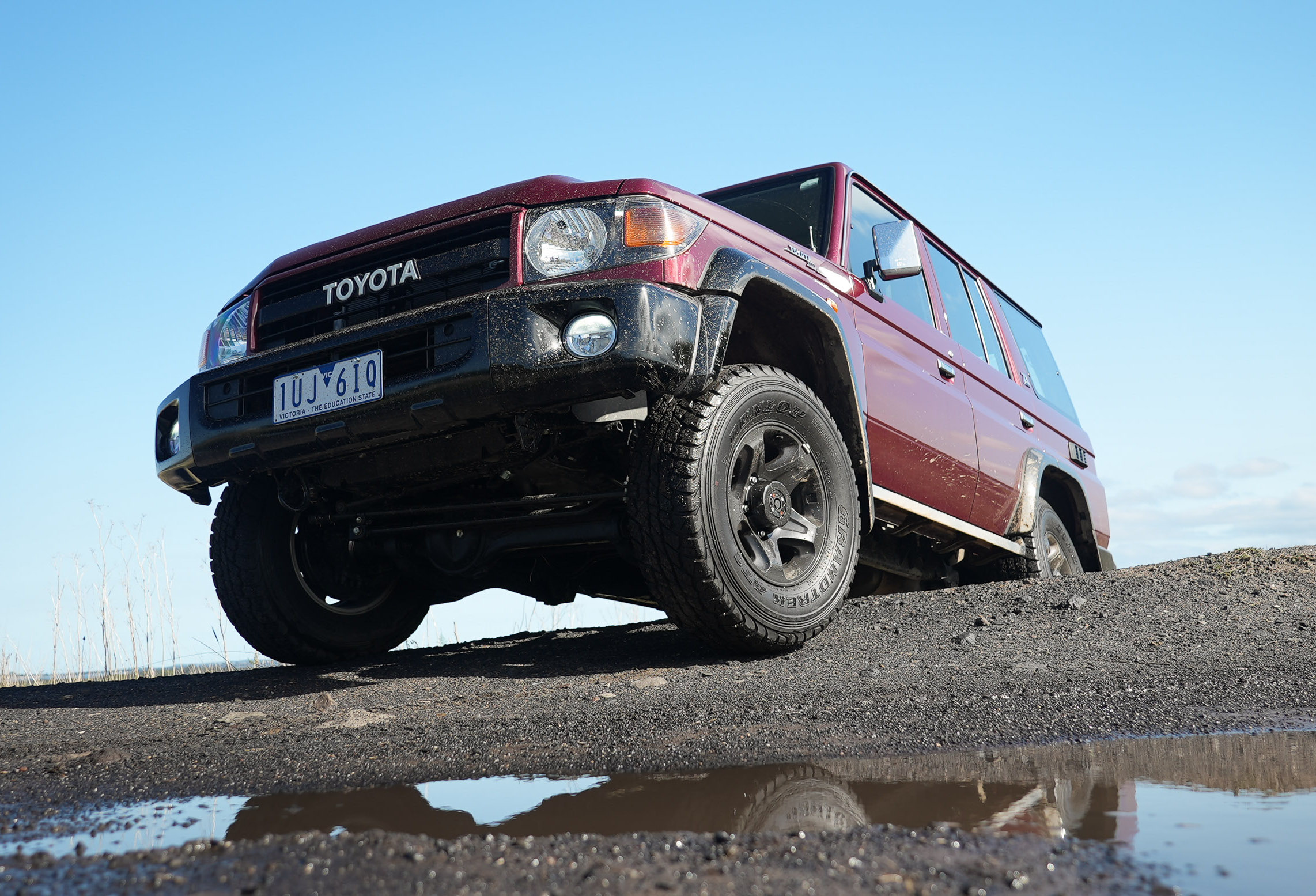 Yes, believe it or not, you can still buy a brand new Toyota LandCruiser 70 Series in Australia. Amazing, isn’t it? And very cool in our opinion. You can get it in a variety of trim levels, and even in different body styles, including dual-cab ute, troop-carrier, and this, the wagon (76 Series). 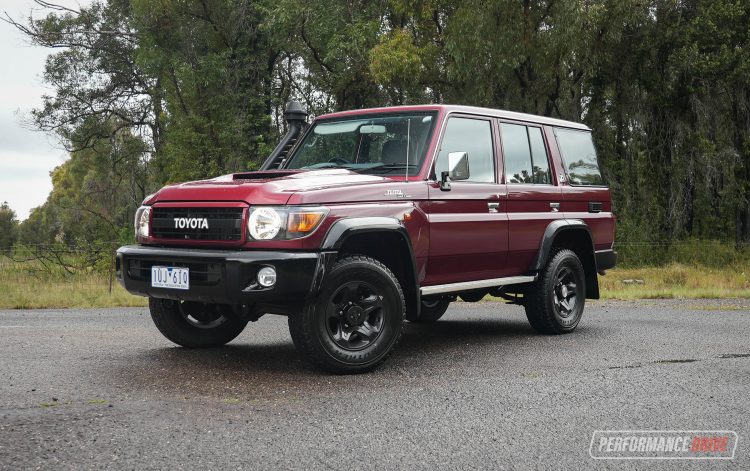 The example we are testing here is actually a pretty special one, because it celebrates the 70th anniversary of the LandCruiser. It’s based on the otherwise top-spec GXL, only it adds some distinctive cosmetic tweaks for the outside and a sprinkling of luxury inside.

Prices start from $78,500 for this spec. It is a lot, but we get the feeling anybody who buys one will probably get their money back whenever they sell it. LandCruisers tend to hold their value better than almost anything else on the market at the moment. The 70th Anniversary special edition comes in dual-cab ute (from $82,600) and single-cab ute (from $80,050) forms as well. 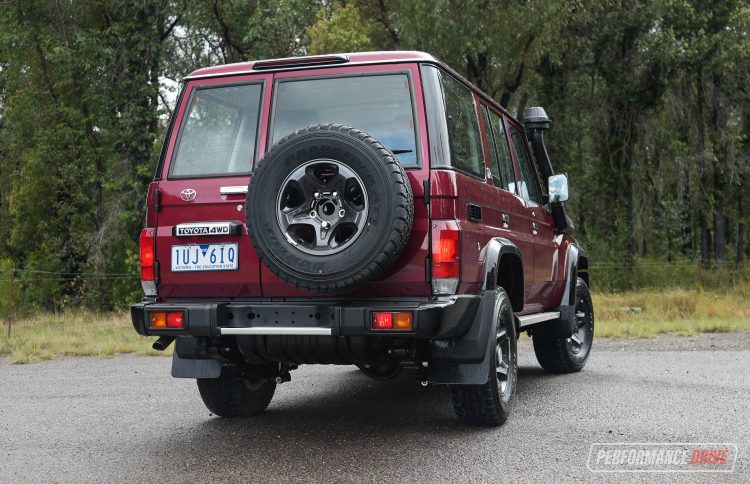 Firstly, you’ll probably notice the black highlights for the exterior, including the wheel arch flares, painted bumper bars, various body trimmings, and the dark 16-inch alloy wheels. These highlights are all part of the 70th Anniversary pack. Those dark grey alloy wheels are wrapped in big 265/70, all-terrain tyres.

Inside, the special edition is surprisingly posh (for what it is). You get leather-like seats, a proper centre console with a couple of charging ports, a new 6.1-inch touch-screen on the dash with satellite navigation, and even woodgrain-style inserts. A rear-view camera is an obvious omission, but it shouldn’t be, and there is no Android Auto or Apple CarPlay – although it does come with Toyota Link. 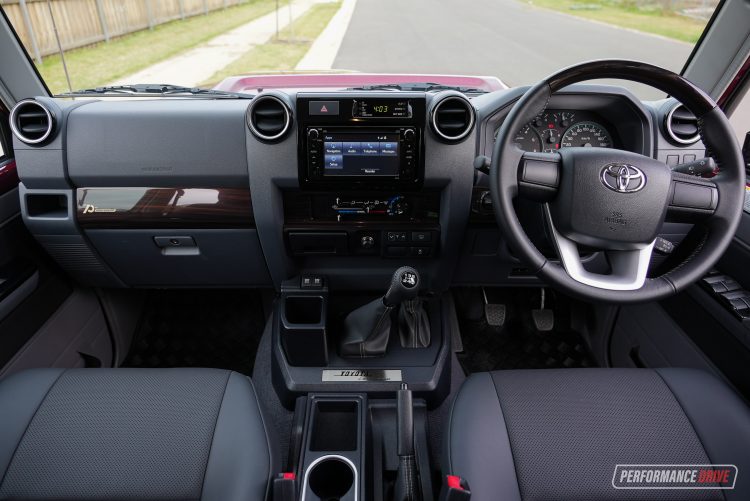 There’s no hiding the fact this is an old vehicle. Like, check out the old-school climate controls. Remember these temperature and vent area sliders? Such a blast from the past. Toyota has improved practicality with the latest version though, adding useable storage boxes, and even cup holders. The special edition also adds two additional USB charging ports, with four in total.

The cabin remains very tall and upright, with huge windows providing a clear view of the terrain around you. You can easily peer over the door edge and see pretty much straight down the sides, which really comes in handy during technical off-road navigation. Some extra adjustment on the steering column would be nice, but all-in-all it’s a reasonably comfortable place to be. 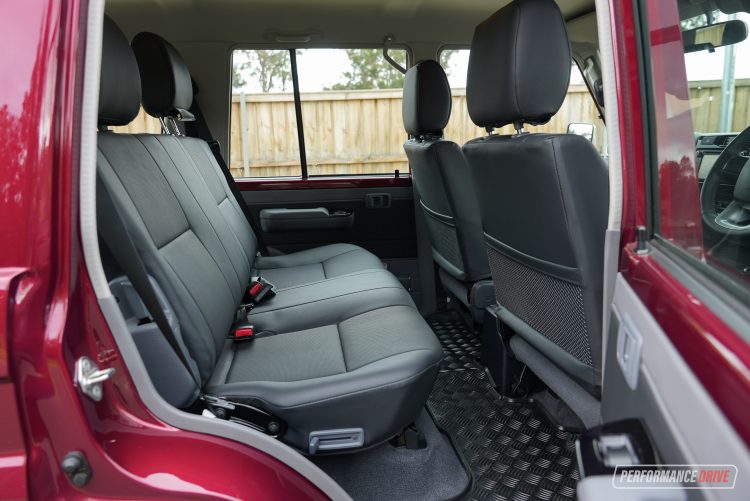 Rear seat appointments are limited to… the seats, some map pockets, and that’s about it. Legroom and headroom probably won’t be an issue for most people, though. The ceiling is in the clouds, and the floor space is open and clear of driveline tunnels and clunky fixtures. This example shows off the heavy-duty moulded rubber mat option. Oh, and there are ash trays in the doors to match the actual cigarette lighter in the dash – we haven’t seen those for years, not in a new car anyway.

We couldn’t find volume figures for the boot, but it is huge. There’s plenty of depth and height available, and a mostly flat floor. You can also flip up the rear bench for extra depth. You can actually fit a baby seat in, but the anchor points are on the ceiling right at the back. Twin barn-style doors at the back provide handy access. 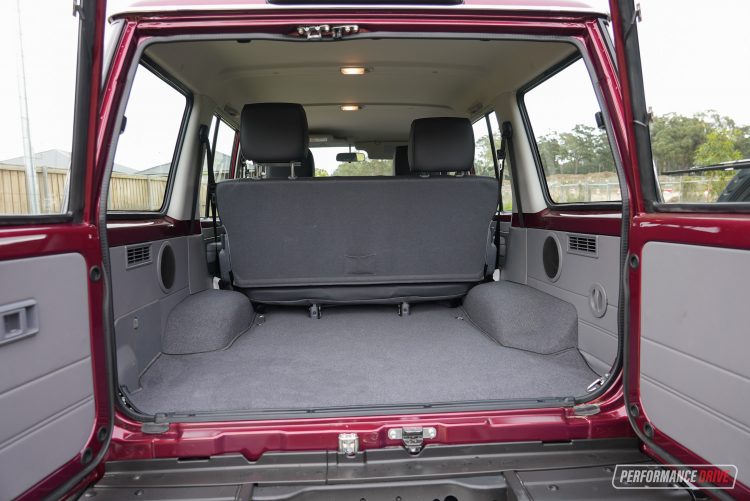 The 70 Series continues as one of the most rugged and heavy-duty SUVs on the market. It features live axle suspension front and rear, with leaf springs at the back and coil springs at the front – there aren’t many new vehicles on the market that still offer this. Obviously this isn’t the most refined or sophisticated setup, so it can feel like a bit of a truck in urban conditions, but it is very heavy-duty. For example, the braked towing capacity is 3500kg and the gross combination mass is a whopping 6560kg.

However, ride and handling are not as challenging as you might think. There is a moment of body lean coming into corners, but it tends to hold its leaned stance and maintain – at least manageable – tracking and some level of precision. There is some play to the steering, which definitely comes in handy during serious off-roading, and highway cruising can be achieved at around 2000rpm with the five-speed gearbox; Toyota made some adjustments to gear ratios a few years ago to improve this area. 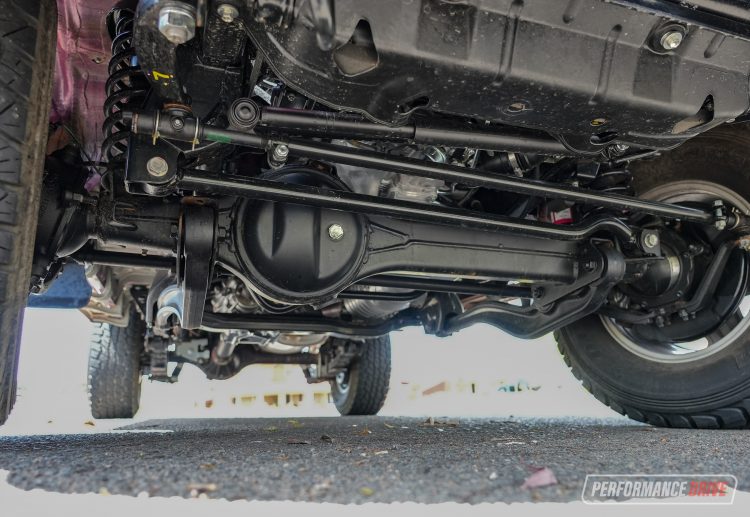 Ground clearance is rated at 230mm. And although that doesn’t seem like much compared with some SUVs, any objects that do catch underneath are going to be met by a thick and solid component (or protection plate), which will win against clumps of mud or ruts and so on. The approach angle is 33 degrees and the departure angle is 23 degrees. We’d recommend fitting a tow bar just so it gives you that extra protection at the back.

Under the bonnet is the same trusty 4.5-litre turbo-diesel V8 as before, developing 151kW at 3400rpm and 430Nm between 1200-3200rpm. This is now the only V8 option for the LandCruiser nameplate, given the new 300 Series has moved to a V6. It’s pretty slow, as you’d expect, but it offers unrivalled reliability, and seems a perfect match for this style of vehicle. It is only available with a manual transmission. 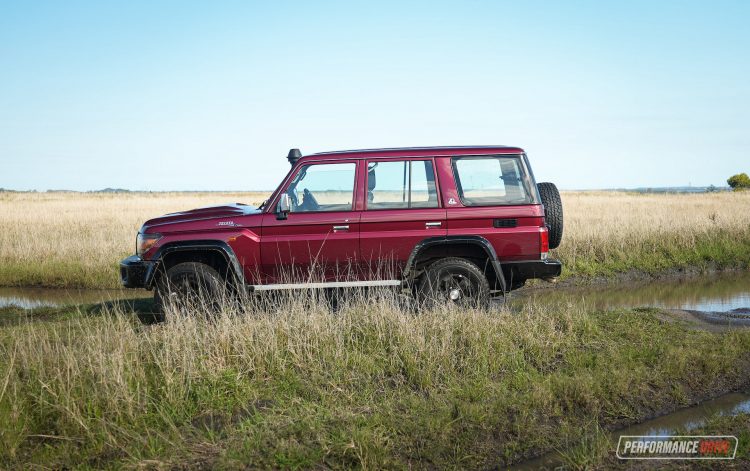 Across the usual 0-100km/h sprint we clocked a best run in 12.19 seconds using our Vbox, which is the quickest time we’ve ever achieved in a 70 Series (four previous tests). Since you can take off in second gear – we’d encourage it on downward slopes – we also ran a test this way and it clocked the sprint in 12.54 seconds. On anything that is sloped even slightly downward, taking off in first gear is almost a waste of time as the gear is so short.

Now obviously acceleration is not what this beast is about. This is designed to get you to places not reachable in a conventional car or SUV. It’s also designed for long trips, to remote locations, including to the Australian outback. With a 130L fuel tank and an official average consumption rate of 10.7L/100km, the theoretical average range is 1215km. During our week this example recorded an average of 11.3L/100km and that translates to a range of around 1150km. 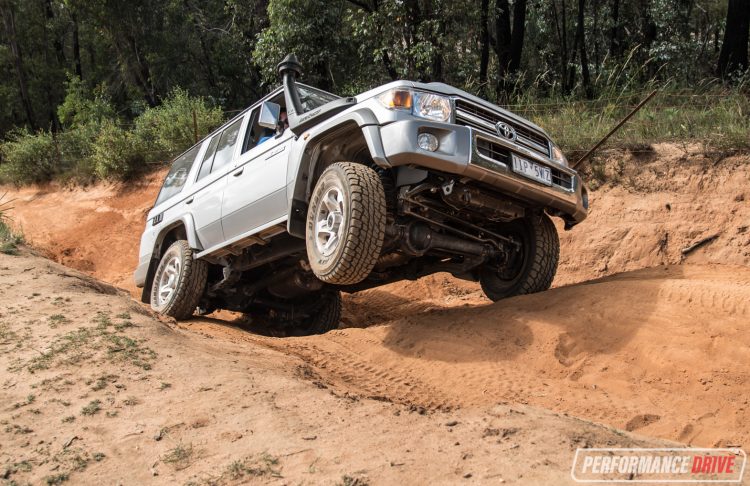 Admittedly, we didn’t really challenge this vehicle during our test, mainly due to lockdown restrictions that were in place at the time of testing. But we have taken one properly off road before and it is virtually unstoppable.

Engage the front and rear differential locks, and low range, and it just keeps going. It doesn’t want to stop, regardless of how sticky or rough the conditions are. If we had one complaint about its off-road prowess it’d be that there could be more flex, more suspension travel as it does like to pop a wheel in the air. 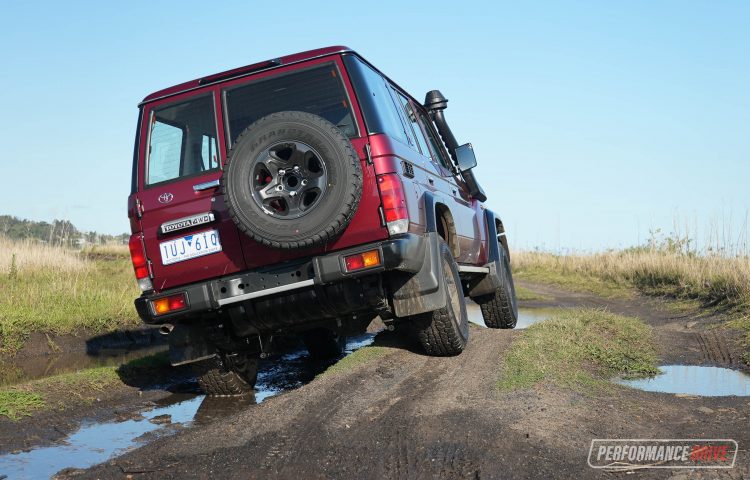 Yes, there are more refined SUVs out there, cheaper ones, quieter and more powerful ones, and safer and more comfortable ones. But for us – and likely many other enthusiasts and hardcore fans out there – nothing comes close to the sheer dependable ruggedness and veteran wit of the 70 Series. This is definitely a car of our dream car garage, particularly this special edition version. We’ll have one in white, please.

CONS:
– Drives like a truck
– No ANCAP safety rating
– Misses out on heaps of modern tech and safety gear compared with SUVs