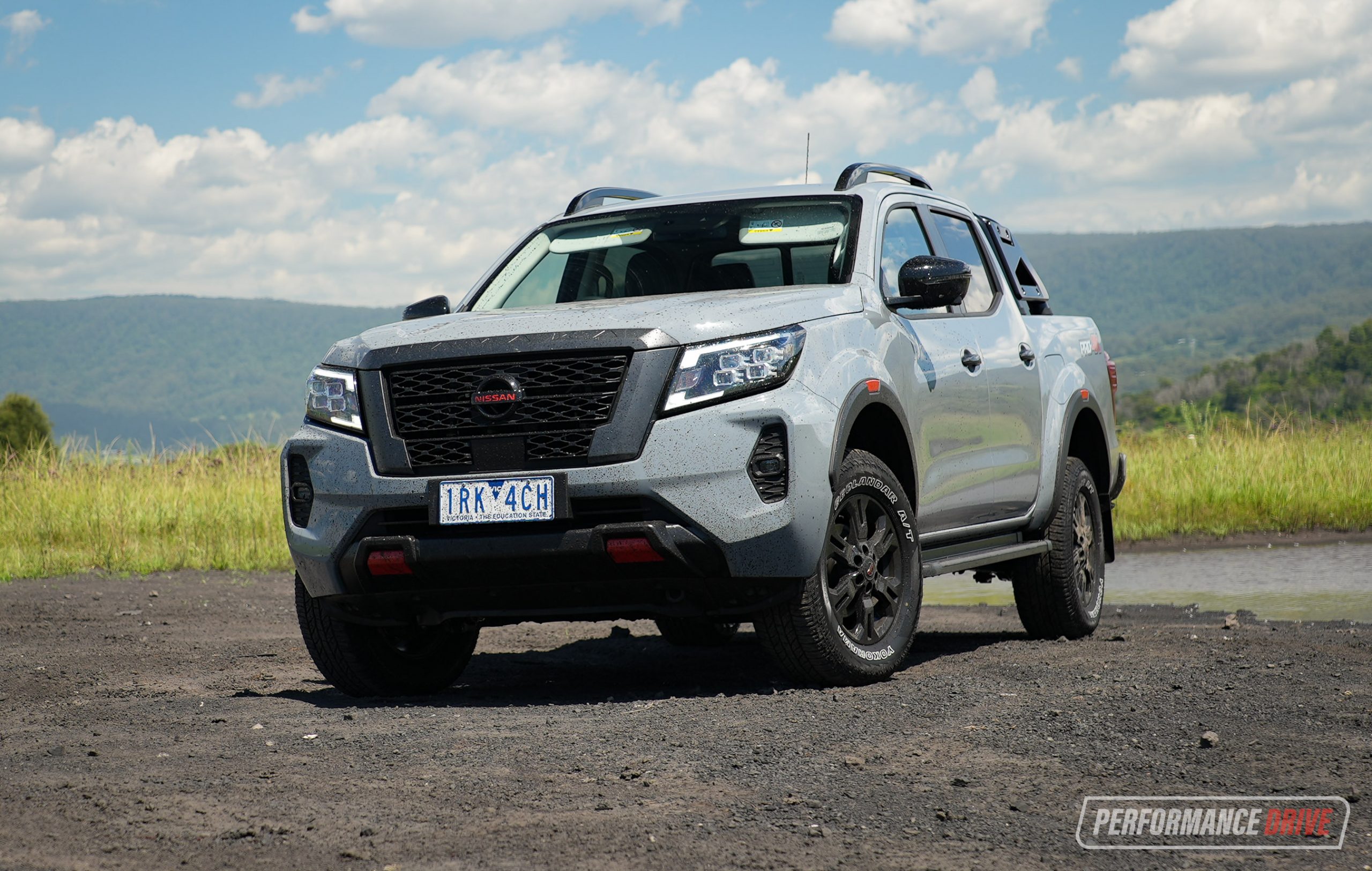 X is obviously the letter of month at the moment, and Nissan has jumped on the bandwagon with the 2022 Navara PRO-4X. This is the Japanese company’s answer to vehicles such as the Toyota HiLux Rugged X and Ford Ranger Wildtrak X. There’s also the Isuzu D-Max X-Terrain. 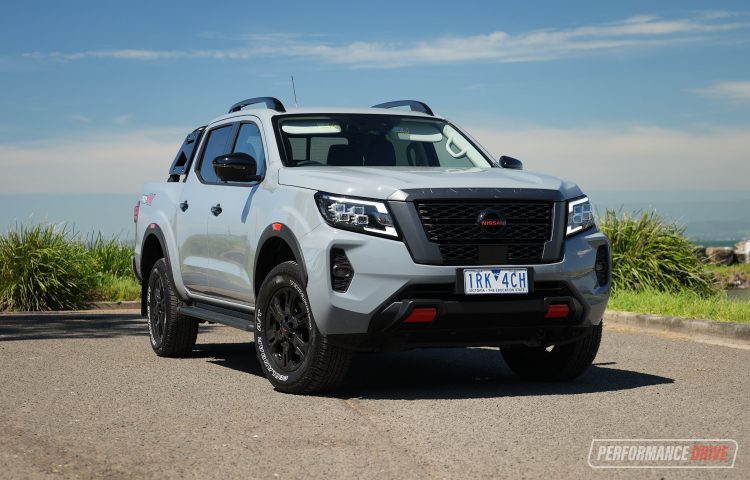 What does PRO-4X mean? We don’t think it really matters. What matters is that this has all the attitude and adventurous character that everyone loves at the moment. It also becomes the new flagship variant above the ST-X, although there is the hardcore PRO-4X Warrior that features aftermarket-style enhancements and accessories, sitting further above. 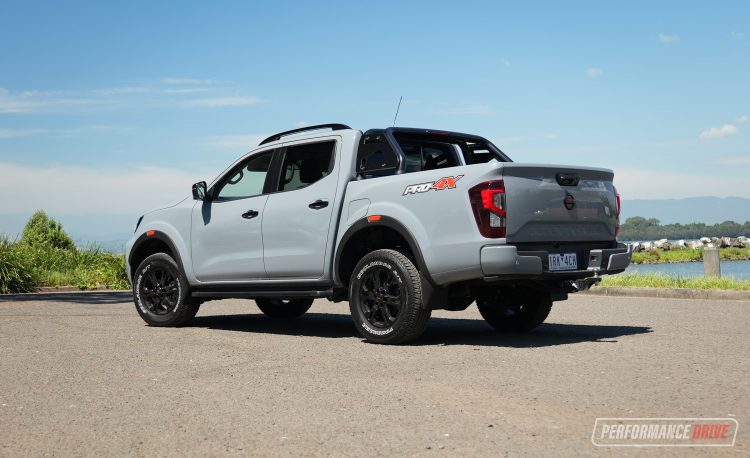 It is basically a sticker pack, if we’re honest. But it’s a cool and strategic sticker pack to help it keep up with the market trends. Nissan has applied some unique and very fashionable black-painted alloy wheels which are an inch smaller than the 18s on the ST-X. That’s so it can house bigger tyres. The 255/65 Yokohama Geolandars are all-terrain too, as opposed to the standard 255/60 highway-terrains on the ST-X.

The PRO-4X also gets a large black grille, black wheel arch extensions, and black sports bar at the back. We think it all looks tough and really well proportioned, although we’re not sure about the little red tabs on the front bumper. These falsely lead you to believe it has exposed recovery points, like the real ones on the HiLux Rugged X and the more expensive Ranger Raptor. 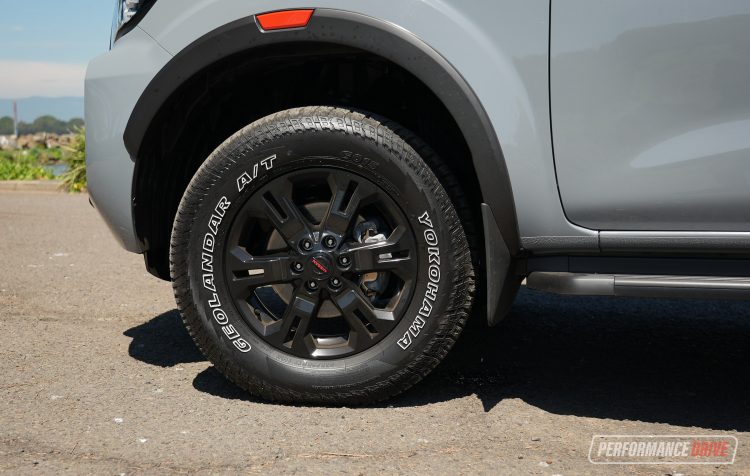 Being based on the top-spec variant, the PRO-4X comes with coil springs at the back. Even though these are not as heavy-duty as leaf springs, they definitely help out with on-road comfort. The braked towing capacity is at the segment limit of 3.5 tonnes, and the payload capacity of just over 1000kg is actually better than many dual-cab rivals.

Inside is where the Navara does fall behind some rivals in our opinion. It just doesn’t seem modern enough, especially as Nissan just introduced a big facelift for the Navara; you’d expect something more forward-thinking. The 8.0-inch touch-screen is now pretty small by today’s standards, and the graphics and menu layout are underwhelming. 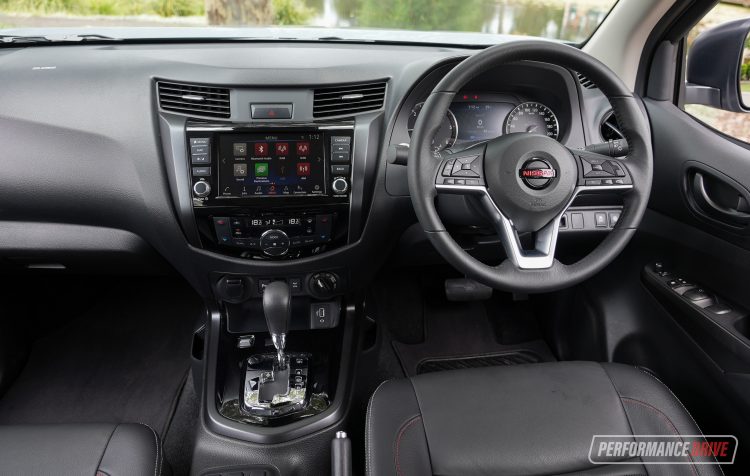 Cabin storage and passenger comfort is quite good though, and we love the sporty three-spoke steering wheel. It’s a shame the PRO-4X misses out on power front seats, despite being the flagship variant, but the leather trim and contrast stitching give it a sporty yet luxurious look. The seats also provide more than adequate comfort and support, however, the driving position isn’t quite right due largely to a tilt-only adjustment from the steering column.

Rear passengers are treated to climate vents, which is not all that common in these types of vehicles, and there is one USB port available. There’s also that trademark slide-opening rear window portal, adding some novelty. 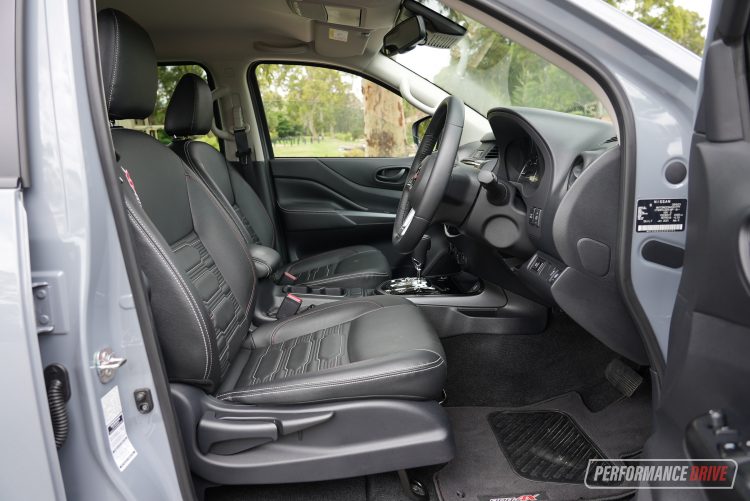 No changes are made under the bonnet for the PRO-4X, but that’s pretty typical for these ‘X’ models. Power comes from the same 2.3-litre twin-turbo four-cylinder diesel found in most of the range. Power and torque levels are adequate, at 140kW and 450Nm, but noise levels are a bit high according to our decibel gauge and compared with some key rivals.

The idle measures in at 53dB while full throttle overtaking between 60-110km/h peaks at 85dB. The latest Isuzu D-Max dual-cab, for example, has shown readings of 48dB and 79dB, under the same testing conditions. It’s not that this produces a lot of traditional diesel clatter, but rather just a busy, unappealing noise. And there aren’t many points of the rev range where it just hums along gently in the background, especially in urban situations. 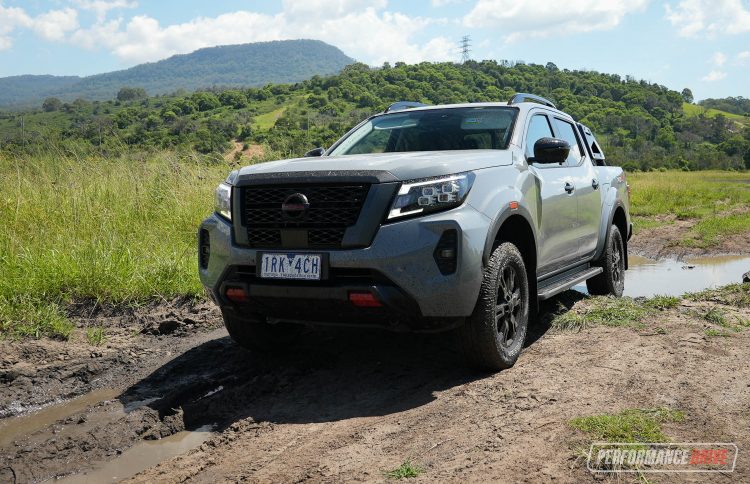 Another letdown is the seven-speed auto. Most of the time it works fine, but once you’re up and running it does like to jump into top gear. Sometimes prematurely, even to the point of labouring the engine. Performance is about average for this segment as well, with 0-100km/h coming up in 10.85 seconds according to our tests.

Ride and handling are excellent. Those coil springs at the back mean your passengers are not bopping and pouncing about over rough roads. In that sense, we recommend the Navara for growing families over many rivals. Particularly if you’re planning lots of explorative road trips around Australia. Cornering is managed with good body composure, and the steering feels light, predictable and relatively SUV-like. 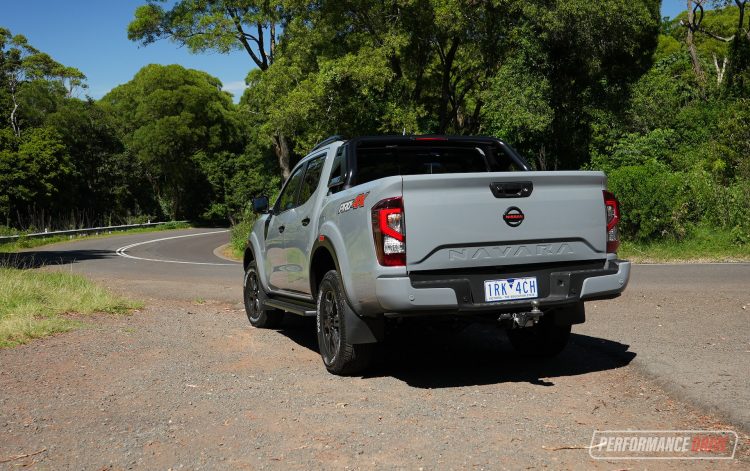 No changes are made to the running gear for the PRO-4X over the regular variants, but there is a rear diff lock as per all 4WD models. Strangely, despite its macho character, the PRO-4X actually offers reduced off-road capability over the ST-X. Well, that’s if you look at the dimensions only (aside from the upgraded tyres). 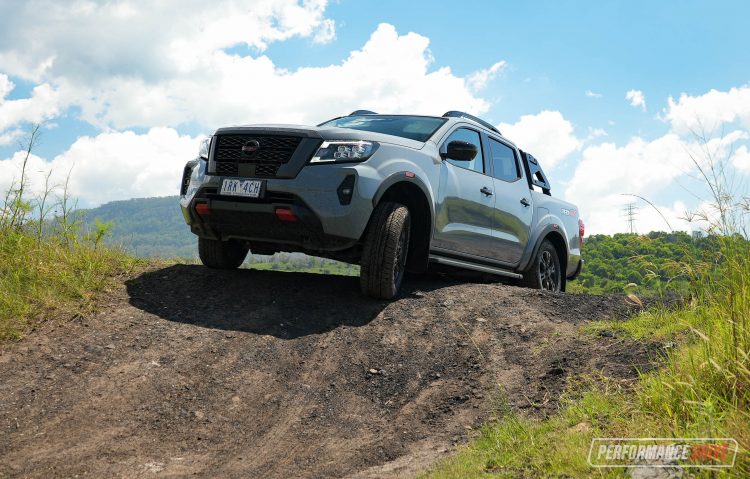 However, regardless of all of that, this test car easily conquered whatever we threw at it. Admittedly, the track we used wasn’t the most challenging, but probably at the limit of what most owners will be willing to take on. As in, rugged and rough enough without needing to endure those iffy, butt-clenching moments.

There seems to be good suspension flex going over rutted sections, ensuring the wheels are on the ground as much as possible, and the Geolandar tyres provide good grip, even through sticky and boggy mud. The hill descent control function and low-range also provide excellent stability and control going down steep hills.

Even though it does have some flaws, we really like the Navara. The design isn’t over the top like so many rivals. The handling is about as impressive as you need from a vehicle like this. And the ride comfort definitely leaves many in its shadows. The fact that the PRO-4X price undercuts the key players is also an attractive trait. If it had a more advanced interior with fresher tech and gadgets, and a revised engine to improve refinement and performance, even just a smidge, you’d be looking at a properly thorough package.

CONS:
– PRO-4X approach and departure angles are actually worse than ST-X
– Noisy engine, and performance starting to slip behind key rivals
– Interior in need of a big tech upgrade