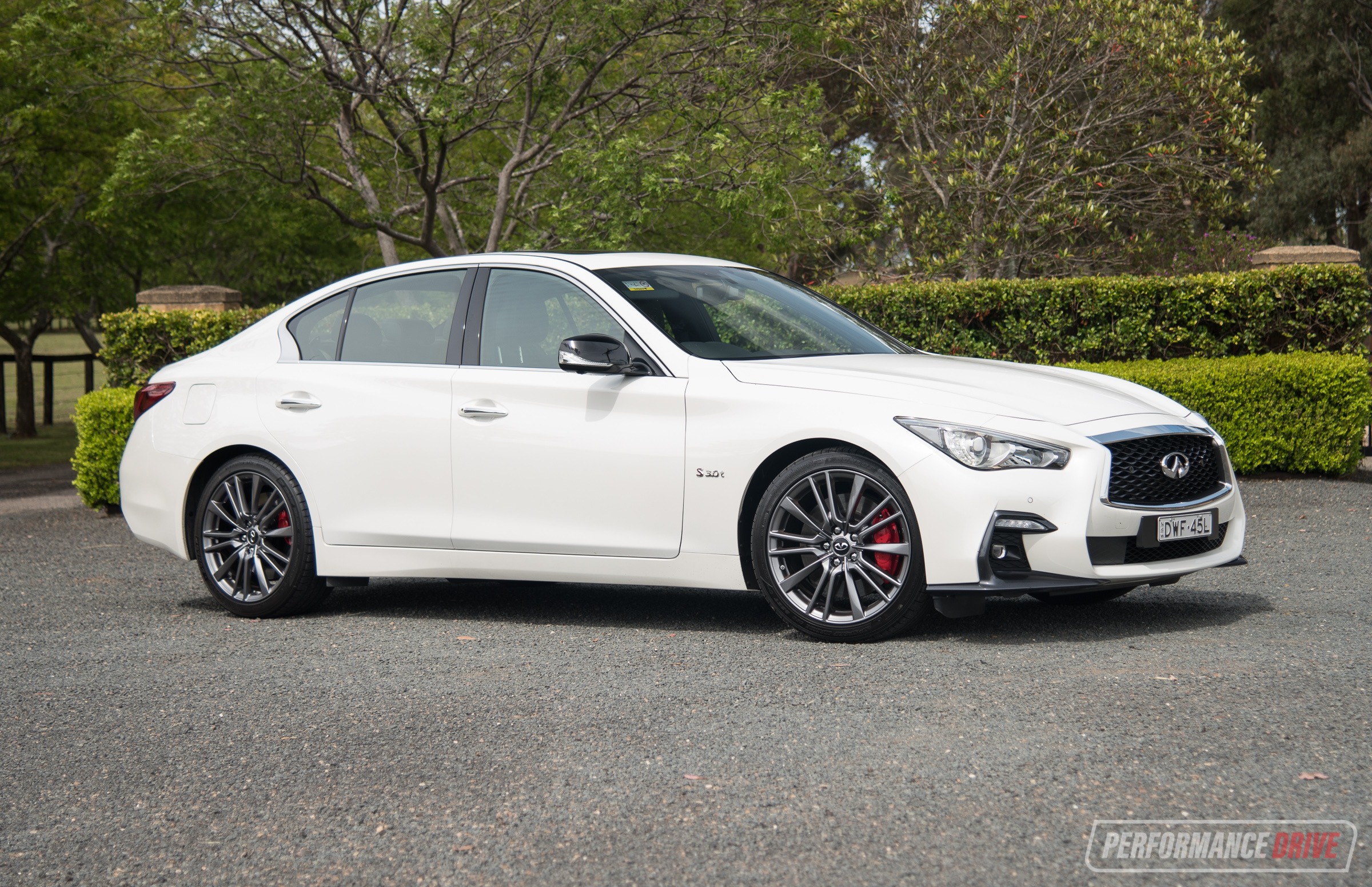 Mid-size premium sedans can get very expensive, especially the flagship models. Infiniti Australia recently slashed $5000 from its contender, the Infiniti Q50 Red Sport. So now it is, potentially, one of the best bargains of the year. 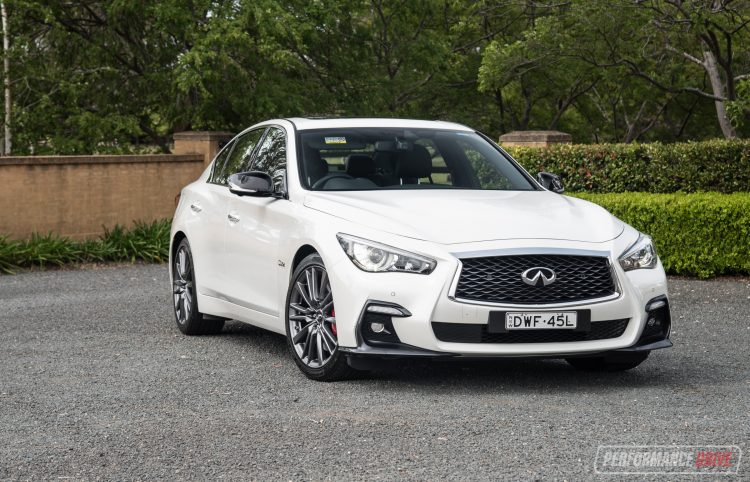 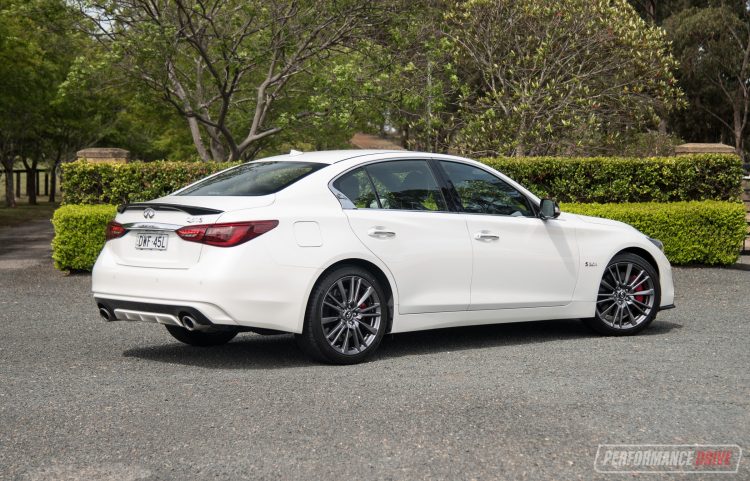 This example tested here is featured in Majestic White. We think it looks quite cool, teamed with the black highlights that are exclusive to the Red Sport, such as the neat lip spoiler for the boot and the skirting garnishes fixed to the corners of the front bumper bar. You’ve also got the dark grey 19-inch wheels, with red multi-piston brakes lurking behind. You’d have to agree, it does look pretty dynamic.

Into the low-slung interior, you’re presented with red-stitched leather sports seats with diamond-stitch patterns for the hip bolsters. These are power-adjustable in a number of ways, and provide excellent comfort and support whether you’re cruising along the highway or carving up a mountain road. Headroom and legroom is respectable for the class, with a great natural driving position and perfectly placed pedals. 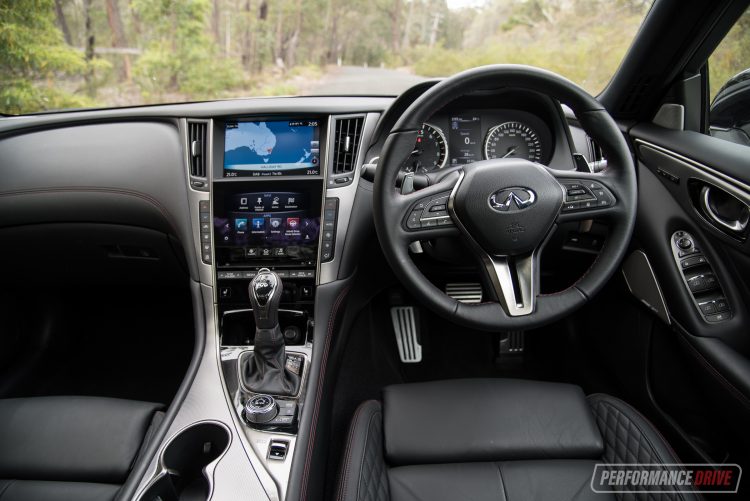 Rear seat space is a little tighter, but it does well for this class. Legroom is reasonable but our main gripe is how low the seat bench is. You have to bend right down to get in below the low sweeping roof. Once you’re in though the headroom is pretty good. There is a flip-down armrest from the middle seat with two cup holders, and climate venting in the back of the centre console. But you won’t find power outlets or temperature control back here.

A power sunroof comes as standard and can help to brighten up the mostly mono-tone grey decor. You can opt for light cream/beige leather, which is nicer but it does extend to the carpet floor mats. These do show stains and get dirty very easily. 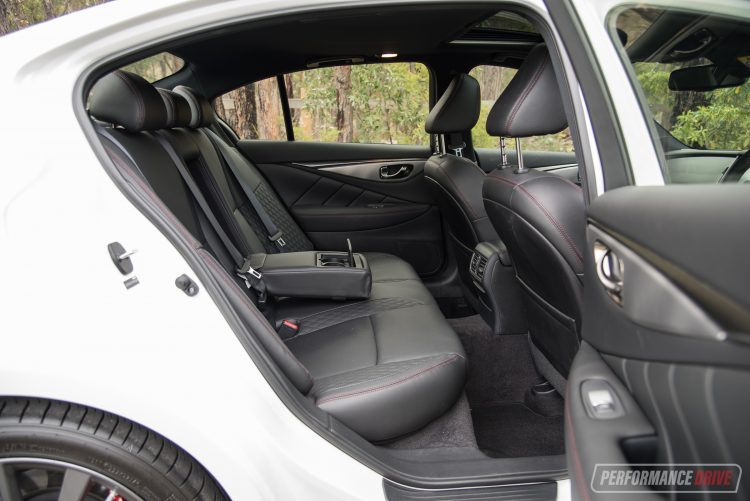 The standard features list is very extensive, which really broadens its value perspective we think. And there are no major options. In fact, only premium paint will cost extra ($1500), with everything else fitted as standard. This includes the dual touch-screens for the dash that are programmed with most of the modern conveniences.

Sure, the upper screen does seem a little aged with inferior graphics and touch operation. But it does come in handy having two separate screens. The upper one is mostly for the sat-nav, while the lower screen is for climate, media and in-car apps such as vehicle settings and so on. You won’t find Apple CarPlay or Android Auto, though, as the Q50 is a bit before its time. Head-up display is also missing. 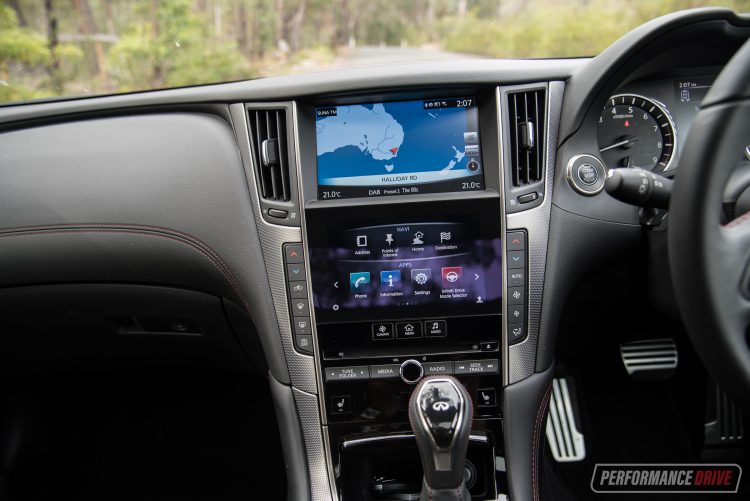 The Q50 Red Sport can be observed from two different angles we think. On one hand, it’s a sports version of Infiniti’s mid-size sedan, promising a pretty serious level of driving agility, speed and performance. On the other hand, it can be taken as a smooth, quiet and luxurious executive sedan that also happens to be very, very powerful. It’s the approach you take that determines the overall experience in our opinion.

We’ll start with the sporty side. That ‘VR30’ twin-turbo V6 engine is a forceful, relentless beast. In-gear surge and acceleration is very impressive, really pushing you back into your seat. Our testing returned a 0-100km/h best of 5.24 seconds. We couldn’t quite better our previous time of 5.18 seconds in the 2017 model, but the difference is so small it’s probably just down to how much fuel/weight that happened to be in the tank at the time. We did see a decent improvement on the quarter mile, dropping from 13.68 in the 2017 to just 13.38 seconds this time around. These are some very quick times. 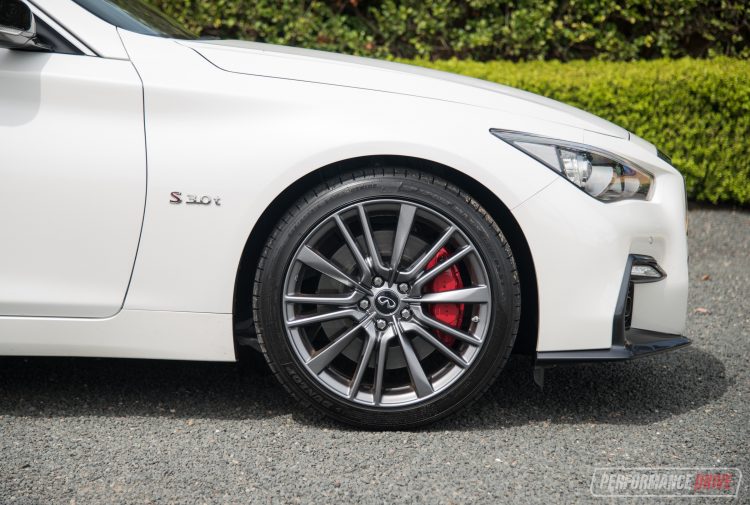 However, there are a few somewhat contradictory elements that might provoke consideration. For one, the potent engine doesn’t sound as sporty as it should, if you take on the sporty mindset. In fact, it is really quiet. It’s only when you switch it to Sport mode that it becomes more vocal. But unfortunately this activates artificial sound enhancements that are produced through in-car speakers. For our test we enjoyed the normal mode more, as the artificial sounds are very obvious.

Around twisty mountain roads, the Q50 Red Sport doesn’t behave as enthusiastic or as thorough as some of the key rivals either. In this mindset anyway. The fully electric ‘Direct Adaptive Steering’ feels far too artificial and thus disconnected from the driver to be confidently pushed hard. And the accuracy seems off, making it difficult to place the front wheels exactly where you want them. Grips levels are very impressive though, with huge lateral g-force generated in sweeping bends. And this is despite 245/40 tyres fitted front and rear, unlike the staggered tyres widths usually applied to a vehicle of this caliber. There’s also no limited-slip differential. 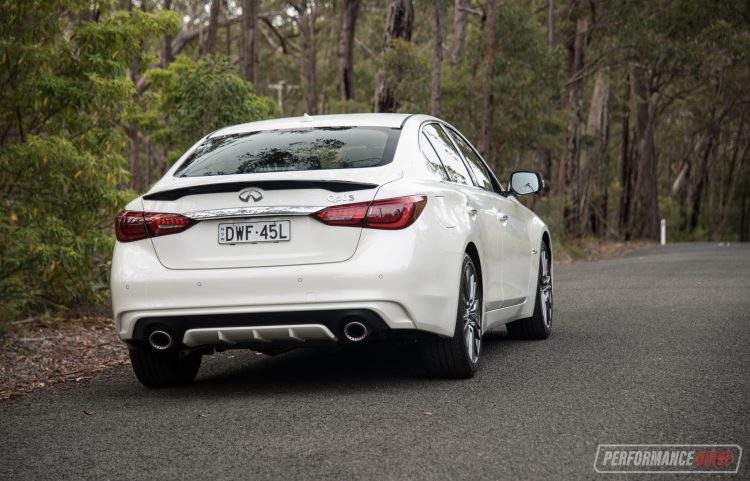 But there is a silver lining to all of this. If you go for the other frame of mind, the luxury and refinement, the Q50 Red Sport is a much more impressive machine. It is surprisingly fast, for one thing, covering 0-100km/h in ‘only’ 5.2 seconds. This means overtaking is absolutely no issue at all. And long steep hills can easily be dispatched in short gallops. The ride quality has a distinct rubbery feel, providing a reassuring tautness that you’d expect from a sporty luxury car, and the handling is very flat and neutral, so long as you aren’t planning on setting lap records and moving into the performance mindset as above. Versatility is provided by Infiniti’s Dynamic Digital Suspension with adjustable settings via the drive mode toggle.

In this luxury-focused frame of mind you’ll also be interested in the Direct Adaptive Steering as it is very smooth and free of interference on the highway. You can also active the adaptive cruise control with adjustable distance settings, and enjoy the autonomous-like steering assistance system. That engine, in normal mode, merely hums along or with a gentle groan when aggravated. This definitely makes for a peaceful and relaxing cruise. Also helping in this area is fuel economy. During our test we managed to see high 9s in open road conditions, rising to just 10L/100km for the week test average. This is really not bad for a luxury car with 300kW.

So, you see, that’s the catch. The Q50 Red Sport is really superb in some areas but it can seem contradictory in others. It simply depends on what you’re expecting from the car and what you intend on using it for. It’s not as precise or as sharply honed as some of the more established rivals, as an outright sports sedan. We think a mechanical limited-slip differential, a decent exhaust system, and mechanical steering could really turn this around.

But then again, if you just want a luxury car that looks cool and comes with plenty of modern tech, that also happens to be properly fast and feature the most powerful engine in the segment, this is your car. The recent price drop should also go a long way in attracting buyers, as it is literally one of the most attainable flagship models in the class.

PROS:
– Smooth yet relentlessly fast twin-turbo V6
– Quiet and refined driving
– Most powerful in the class
– Outstanding value thanks to recent price drop (for this segment)
– Looks cool and unique, especially in white
– Direct Adaptive Steering can be very relaxing in calm conditions
– Reasonable fuel economy for the power