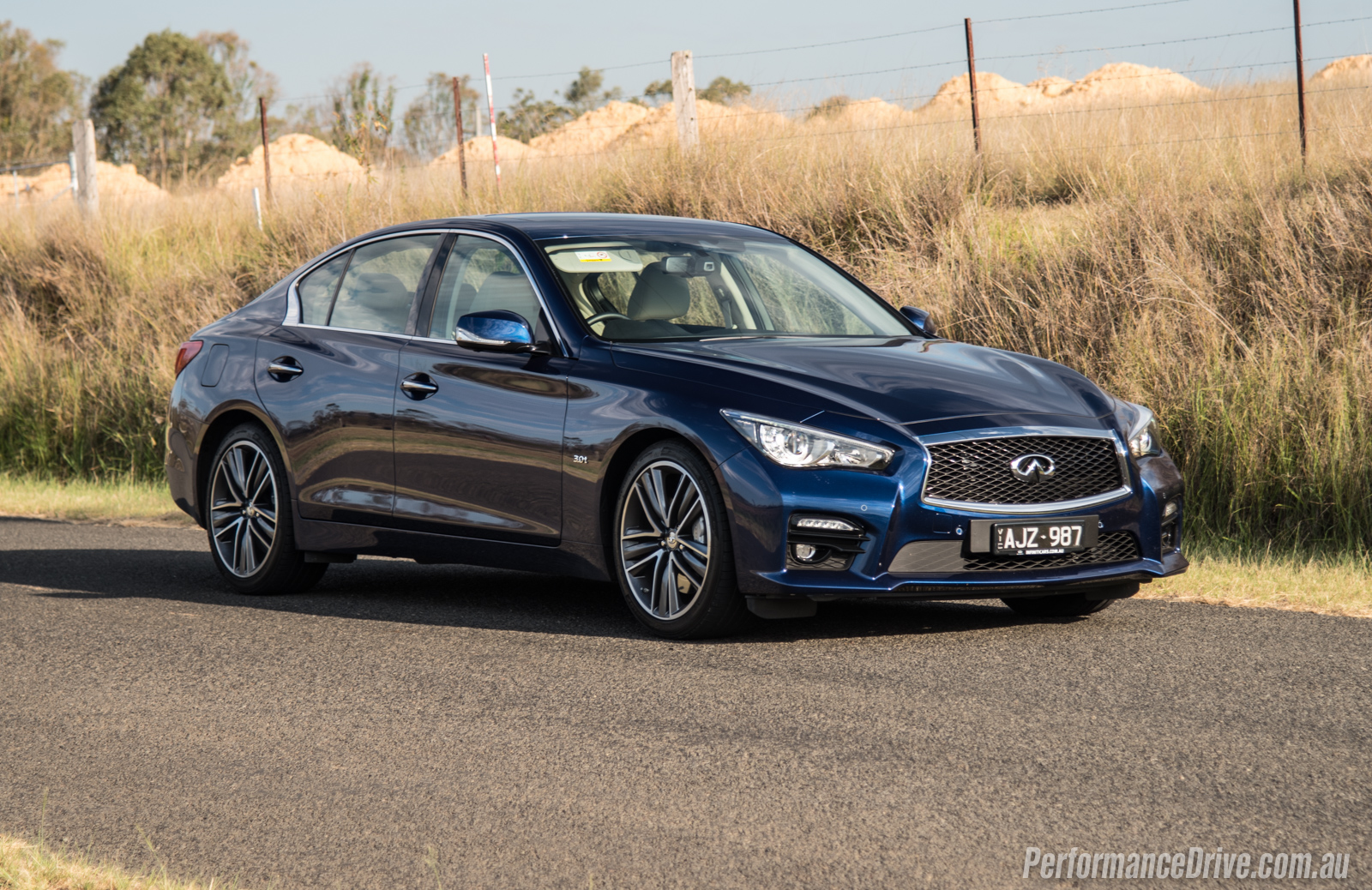 If you’re in the market for a premium mid-size sedan but you’re tired of the usual grey business suits, the 2017 Infiniti Q50 Red Sport could be the strapping young alternative you’ve been looking for. 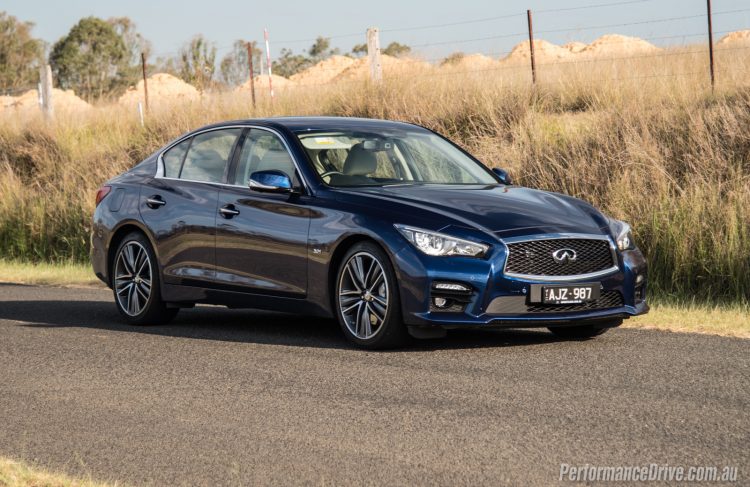 The Red Sport sits at the top of the Q50 range, featuring a brand-new ‘VR’ series 3.0-litre twin-turbo V6 engine. It’s one of two tunes available, with the Silver Sport developing 224kW and 400Nm, and this boosted-up version spinning out a class-leading 298kW and 475Nm. This is sent via a seven-speed automatic to a rear-wheel drive system.

One of the first – and rather major – star attractions to the Red Sport is the starting price. Prices start at $79,900 (excluding on-roads). If you try to get into a flagship version of any of the German rivals you simply won’t get anywhere near the level of standard features and technology offered as standard with the Red Sport. 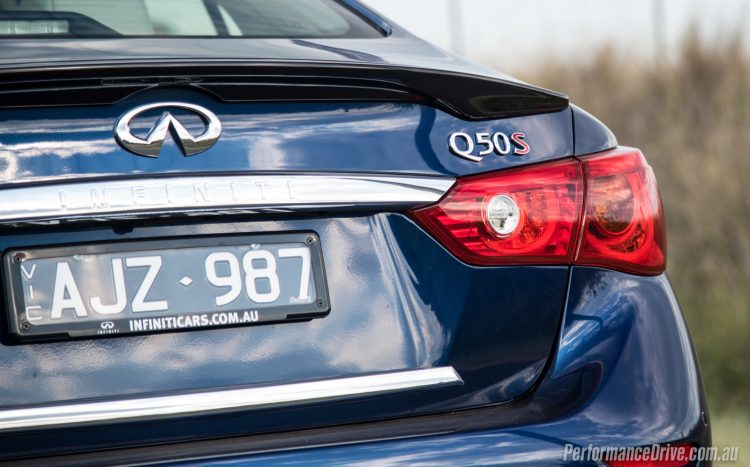 Inside, the Q50 is one of the roomier options in this specific class. Front seat space in particular is open and airy, with a well-forward dash and low centre console making it feel uncluttered and relaxed. Also helping to calm the mood is the light cream leather upholstery in this test car. We don’t recommend the cream carpet mats as they do tend to get dirty very quickly, but we like this colour scheme otherwise. It makes it feel more decadent and the light colour brightens up the cabin.

On the centre stack you might be a little confused to see two separate touch-screens. Unconventional it might be, but two of anything is better than one, right? In theory this does seem so, as you can have the satellite navigation running on the top screen and then fiddle with media and change songs on the bottom screen without either interfering with the other. However, Infiniti has, for some reason, chosen to use an old screen at the top with faded colours and average graphics. Meanwhile the lower screen is a nice new crisp unit using more tactile buttons and menus. 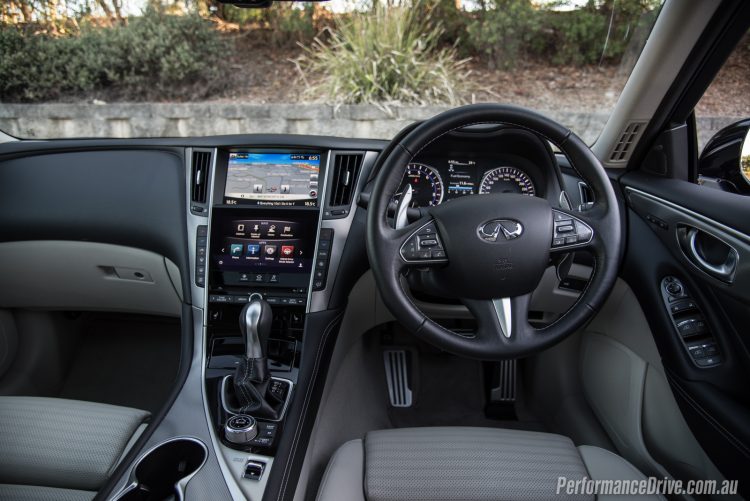 Everything is packed into these though. You get a rear-view camera with side and front views, an impressive array of in-built apps such as Pandora and digital radio, with DVD and RCA support, while tunes are pulsed through a powerful 14-speaker Bose surround sound unit. Clarity and sound quality is brilliant, with plenty of adjustment available to suit your listening tastes.

Other standard goodies include a decent radar cruise-control system with automatic braking, power front seats and power-adjustable steering column, tyre pressure monitoring, dual-zone climate control with memory capability, and a clever autonomous-like braking system that can be switched on and off – it’s like having the adaptive cruise control working all the time, automatically braking the car for you at speeds set by any objects in front of the car. 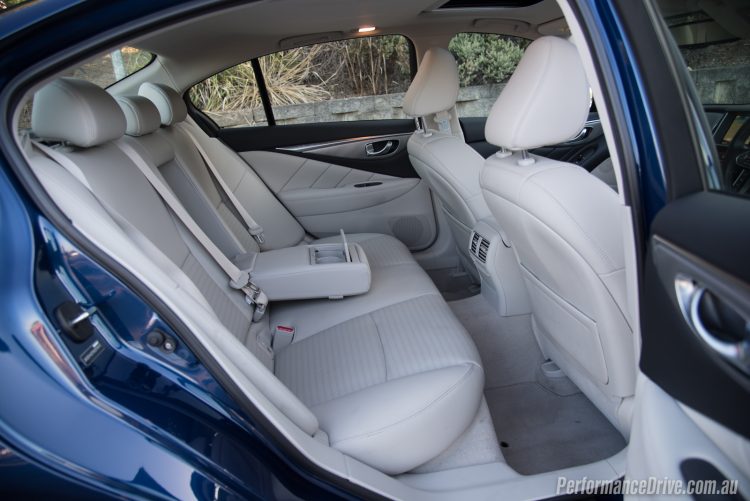 Specific to the Red Sport, the exterior is almost identical to the regular Q50 range. Infiniti decided to remain on the discreet side of things with this one. There’s a subtle black lip spoiler on the boot, some black fog light cluster fins, and that’s about it. Look a little closer and you’ll see the 19-inch alloy wheels are hiding four-piston front and twin-piston rear brakes, while underneath it all is a sports suspension setup with adjustable driving modes for the driver. It’s not as flamboyant as some of the flagship rivals, so there aren’t big bucket seats inside or bespoke alloy wheels and eye-snatching wings. Instead, this one flies under the radar.

There’s nothing we don’t like about this engine. It’s a sweet-sounding, proper six-cylinder machine of a unit. It feels so powerful under your right foot. You just nail it and it erupts and roars, propelling you forward with serious, relentless and linear acceleration. It’s a well-worthy modern successor to the old Nissan Skyline RB-series turbo sixes (Infiniti Q50 is sold with the Nissan Skyline nameplate in Japan). Sure, the enhanced sound through the speakers inside is needless and it could probably be a bit louder from the tailpipe, but in this car, a luxury car, it doesn’t get much better. It’s easily one of our favourite production six-cylinder engines we’ve ever come across.

We timed 0-100km/h in a lightning-quick real-world 5.18 seconds, with the quarter mile coming up in 13.6 seconds. Top end power is where it really gets a grin going, but even still, off the line it has no trouble lighting up the rear tyres from around 20km/h and spinning into second gear. It’s not all about facts and figures either, the way the engine feels is also very important we think, and this unit feels like it’s always on the same page as you. The way it sounds, and the throttle response, and the character of the revs building is like it’s telling a story as it goes. We hope Nissan utilises this engine for a number of future models, such as the next-gen Z car, and even SUVs like the next Pathfinder.

Fuel economy is pretty good too, especially for a flagship model that boasts the highest power figure in its class. We averaged around 11L/100km during our week, with the official figure standing at 9.3L/100km. After extended use we think you could see a lower figure than what we achieved, as we spent a bit too much time testing its performance and flexibility, and double, triple checking, across of a number of days, just to be sure. It’s an irresistible engine. Power-to-efficiency ratio is also excellent, at 32kW:L/100km (298kW divided by the official 9.3L/100km average). Basically this means the engine is extracting every spec of power for every drop of petrol it uses. 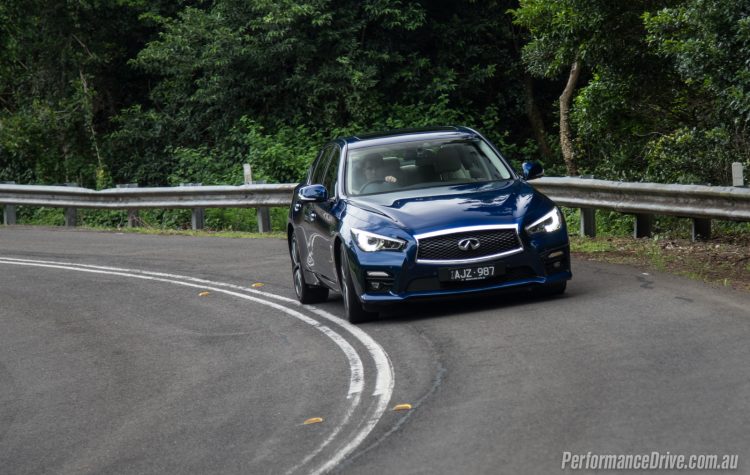 As a luxury car, the engine could be mistaken for an inline six and not a V6, it’s that smooth. Peak torque, all 475Nm of it, is available from just 1600rpm and holds until 5200rpm. It doesn’t matter what gear it’s in, there’s always big reserves of forward surge available. Overtaking simply is not a problem at any speed, and entering motorways is more about enjoyment than transportation.

Where things start to fall adrift is with some of the vehicle’s driving character. On one hand it’s powered by an undoubtedly powerful engine with serious performance, but on the other hand the drive character can seem more about luxury than sportiness. For example, the Direct Adaptive Steering, while being a very advanced and potentially fuel-saving technology, it doesn’t seem matched with the Red Sport persona. It’s hard to get a genuine feel for the front wheels as all communication is sent via electronics; there’s essentially no rod connecting the steering wheel to the front wheels like there is in all of the rivals. Well, there is but it’s a fail-safe one that is engaged via a clutch mechanism.

Turn-in is sharp and very precise, but feedback is non-existent. This makes it difficult to fully trust and even understand the car as you’re tackling bends. On the contrary, highway comfort is paramount, as no wind wobble or bridge connection vibrations are sent through the steering wheel. A lack of feedback does mean it can be a bit unpredictable at times, especially if you’re planning on taking part in any tail-out shenanigans.

Speaking of which, the Red Sport doesn’t come with a limited-slip differential. Traction is good off the line and around corners with mild throttle application, even with the narrow 245 tyres (front and rear), but anything more and you’ll be spinning away all of that glorious power to the inside wheel. This is really perplexing. For a sports sedan that boasts the most powerful engine in its class you’d expect at least an old-school mechanical limited-slip setup. With the traction control on there isn’t much fuss, but you won’t get much forward progression as the system will intervene frequently. With it off, get used to making giant single lines around bends. Regardless of the diff, we think at this power level it should really come with 275 or 285 tyres on the back. 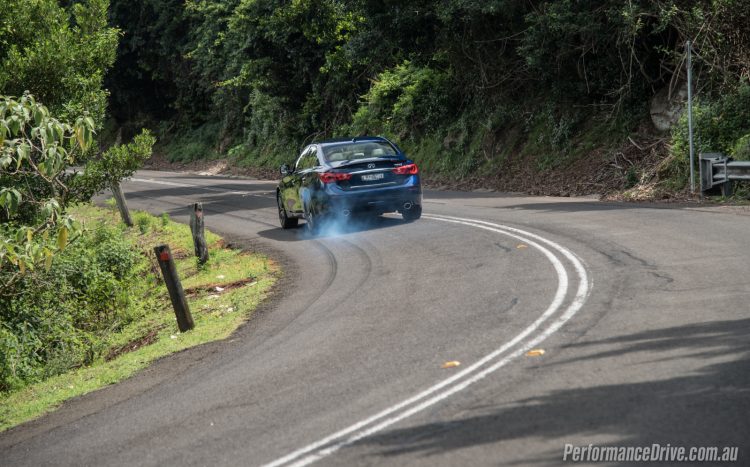 The Q50 Red Sport deserves its place in this competitive segment, currently dominated by the Mercedes C-Class in Australia. Sure, it’s missing some sporty attributes such as a limited-slip diff and the electro steering is a bit strange for pure driving enthusiasts, but overall the car does bring diversity and uniqueness to the class.

It offers one of the best engines, the interior really is a comfortable place to be – albeit aged – compared with the conservative German rivals, and that price makes it the best value in the class. If you’re in this space, we think this one is worth your attention.

We’re looking forward to seeing the next generation of this vehicle though. Engineers only need to change a few small details and it could truly take on and potentially conquer all of the rivals.