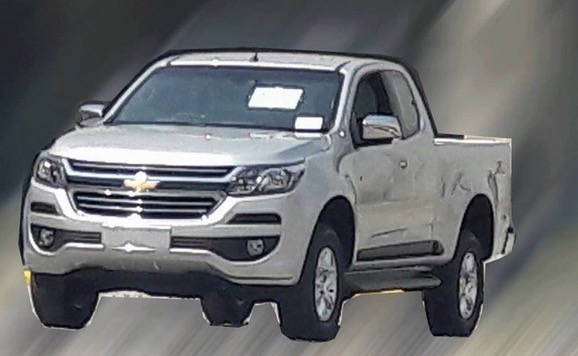 An image of what appears to be the facelifted version of the overseas Holden Colorado, known as the Chevrolet S-10 in some markets, has surfaced on social media giving us a potential look at the next face of the local model.

The image was posted on Instagram by Brazilian website BFMS. It is a fairly poor quality image but you can quite easily make out the new-look grille which is split into halves once again.

There also appears to be an increased use of chrome around the front, along with small side intakes cascading their way down the front bumper bar. In the middle is an up-swept panel that wraps from the underside.

This is a much more sophisticated front end compared with the current Colorado. Chevrolet is obviously wanting to stand out in the crowded ute/mid-size pickup truck segment.

It’s unconfirmed if Australia will receive this facelift. As usual, Holden doesn’t comment on future plans. We believe this is because it doesn’t want its customers to hold off on buying current products.

What it has said though is that it’s planning to launch 24 new models by 2020, including new SUVs, a sports car, and obviously a large car to replace the Commodore. We’ll have to wait and see if this facelift is part of the mix.