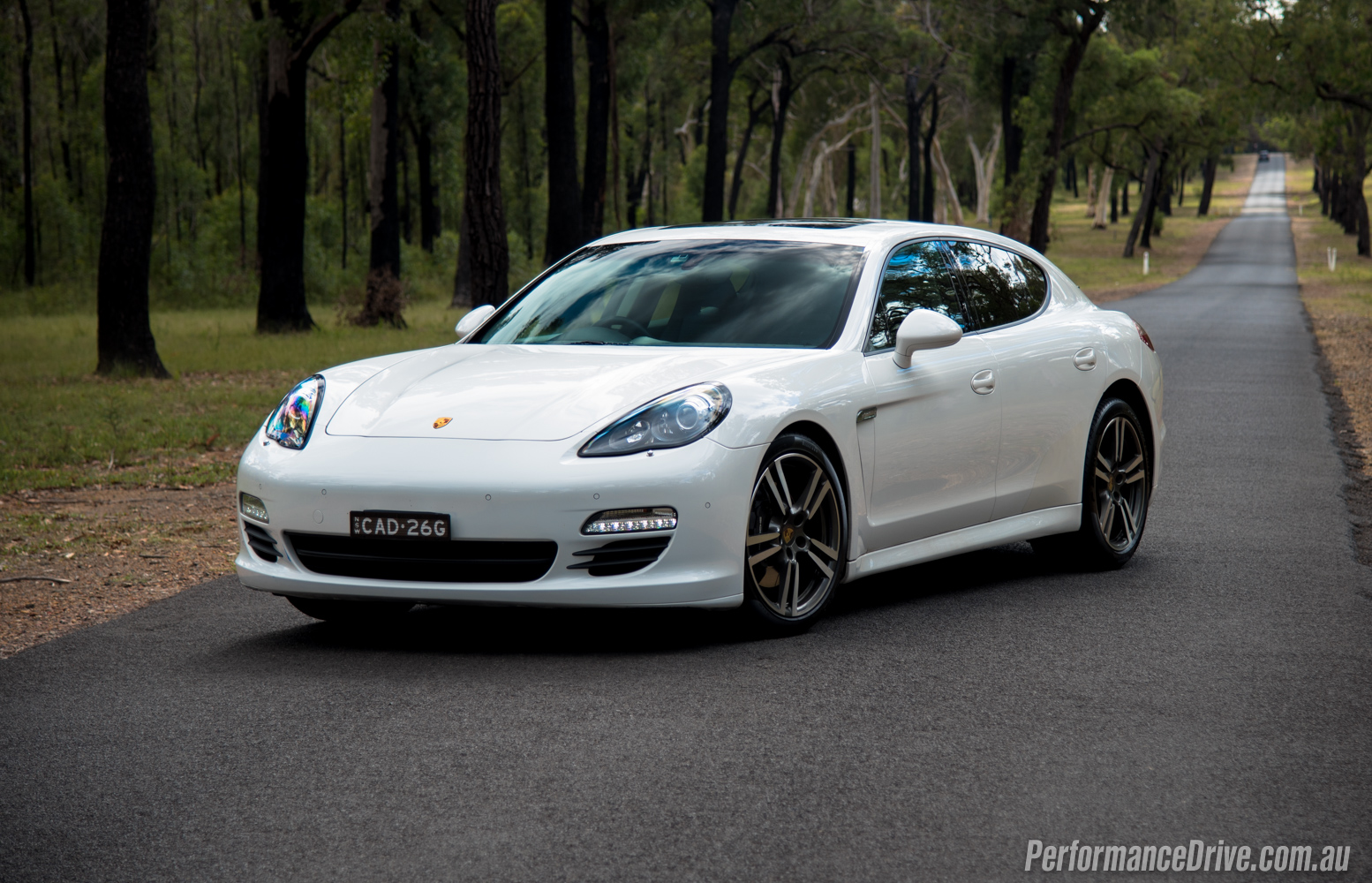 Before Porsche launches the all-new second-generation Panamera we thought we’d review the existing first-gen model to see how it shapes up in the world of prominent, purpose-built grand touring sports sedans. 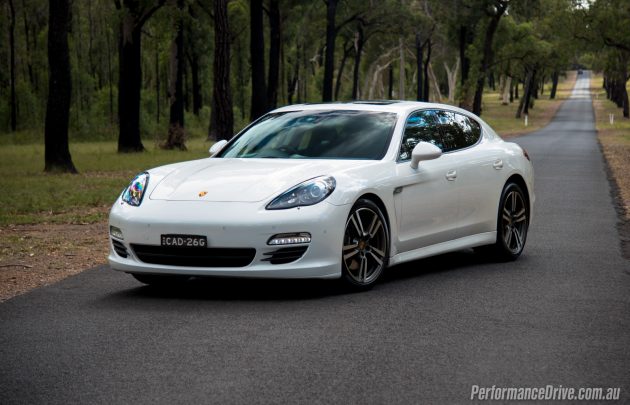 This example is one of the boss’s cars here at PD. It’s a 2013 model with 30,000km on the clock. It’s basically identical to the current version, albeit missing out on the minor facelift applied in 2014. Being slightly used though we can see how Porsche’s renowned reliability and build quality has held up over the years.

The 2013 pre-facelifted version features a 184kW/550Nm 3.0-litre turbo-diesel V6, with rear-wheel drive and an eight-speed sports automatic transmission. This example is fitted with some appealing options, such as 20-inch alloys, embossed interior trimmings, and other bits and pieces. Prices started at $196,700 when new.

So, can Porsche really make a four-door sedan and get away with it? Is it really a true Porsche? If Porsche is a brand that provides exclusive, driver-focused engineering both mechanically and ergonomically, then yes. Let’s dive in. 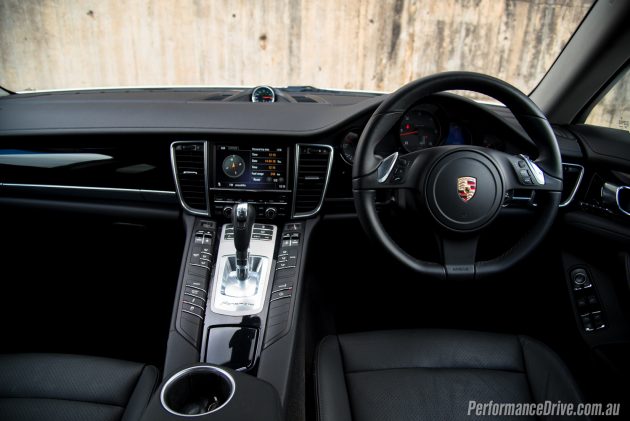 The Panamera interior presents a very smart and down-to-business decor, with an almost bewildering arrangement of buttons lining up the centre console. It’s like stepping into a spaceship. Some of the displays do seem to have aged a little, with the LCD inside the instrument cluster presenting early-2000s graphics. The main touch-screen display also echoes Volkswagen, especially with graphics and tones. But this isn’t necessarily a bad thing as VW systems are very clean and straight to the point in terms of functionality.

Everything you touch has that renowned Germanic quality to it. Buttons and user controls require an assertive pressure to operate, and this gives you a reassuring satisfaction that many engineers worked long and hard to get each and every function perfect – the gear level in particular is a work of engineering art in our opinion; it looks and feels like it has been cut out of a solid billet of aluminium. And you just know everything will keep working for decades to come. This kind of philosophy seems to be applied to every single aspect of the Panamera.

It isn’t just about being formally dressed and on time either. The Panamera is quite practical. In the back is full 445L cargo space accessible via a hatch-style lid. This can be expanded to 1263 litres if you don’t need the rear seats. The load space is high but it goes much deeper than you might expect, making it a genuine everyday-useable vehicle. 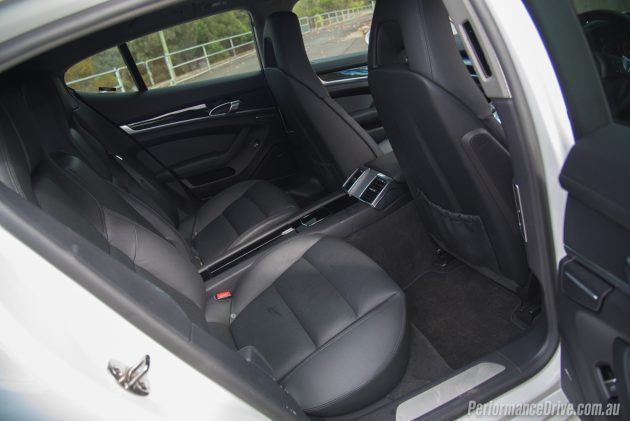 At first glance the rear seats don’t seem all that inviting, however, take a seat and you’ll appreciate the fact Porsche has gone with two separate chairs instead of the usual three-across bench. The way they are installed leaves a slightly reclined position which not only helps with comfort but also headroom. There are some cutaways in the ceiling to help with headroom too. Overall, it is definitely a proper four-seat vehicle.

Speaking of those cutaways in the ceiling, Porsche has been ridiculed for years over the exterior design of the Panamera. We’re not going to comment on that because design is purely a subjective thing (and partly because it’s the boss’s car) . We will say this though; it does look much better in the metal. It transmits that distinct Porsche presence that makes you go ‘oow, ahh’. We love the heat-extraction vents behind the front wheels, and the 911-inspired front end and headlights. It all sits lower than you might expect too, which further emphasises the supercar inspiration. With these 20-inch alloys fitted here, and in a cool white over black colour scheme, the style doesn’t get much better for the Panamera in our opinion. 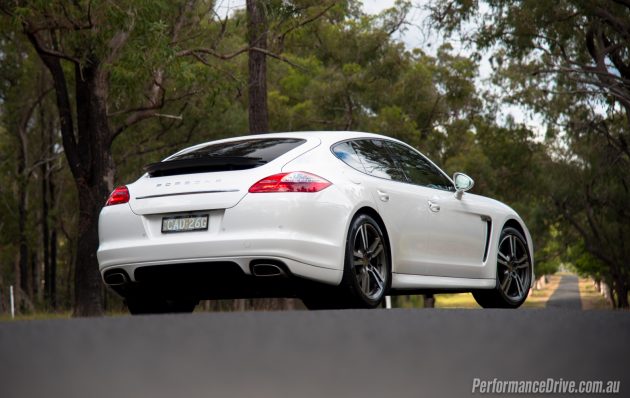 If you’re considering buying a Porsche, chances are, you like driving. Sure, there are going to be some of you out there that just want the badge. Fortunately, Porsche doesn’t offer vehicles just for its badge. And it shows when you first take this big beast out for a spin.

Around our usual winding road test, the Panamera is noticeably heavy. After all, it does weigh in at 1830kg (tare). Porsche needs to reduce this for the next-gen version. Even still, the car is very interactive in the way it drives; it makes the driver a very important part of the equation. For example, if you switch the stability and traction control off and grab it by the scruff of the neck, this thing will actually boogie like it’s 1979 and kick the tail out for an enjoyable and very controlled drift – did we mention this is a diesel? Somehow Porsche has managed to recreate its traditional oversteer-happy personality into the Panamera. Keeping in mind this features a front-engine layout unlike the rear-mounted setup in its iconic 911 models.

Before, during, and after a slide it’s the steering that tells you all of the information you need to know. You can immediately and confidently predict what is about to happen and react right and ready, every time. This is what makes Porsche vehicles so stupidly telepathic. The best way to describe it is to imagine it as like a go-kart. Yep, strip all of that leather and business suit away and you’re left with what is essentially a little driver’s machine.

This is the part that surprises us most. We were expecting it to feel heavy and cumbersome, but with nice steering. It does feel heavy but the level of engagement really is… on another level. You can use your fingertips to place the car precisely where you want it to be, and make any fine adjustments along the way. This is one of those rare vehicles that has been engineered by people who actually like driving, and not just a bunch of accountants that are trying to turn a profit. This stuff can’t be faked. 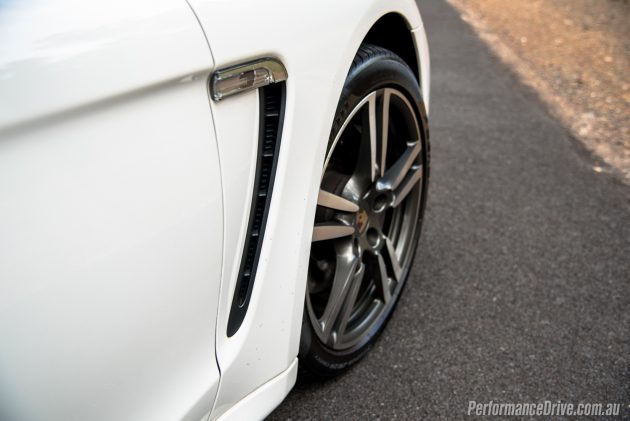 As for the engine performance? Porsche has since upped the power from the Audi-derived V6 diesel engine, to 221kW and a whopping 650Nm. With this lower-tune engine it is not especially quick and the power isn’t particularly amusing, but the torque is rather immense, providing effortless acceleration through all gears and from any part of the rev range. We’re not a fan of the paddle shifters that Porsche has adopted, using plus/minus buttons on both sides instead of up on the right and down on the left. This is just Porsche being stubborn in a French kind of way; coming up with something different just for the sake of it. Hey Porsche, what happened to form following function?

In terms of acceleration we timed 0-100km/h in 6.55 seconds. It feels a bit quicker than that. It gets up to speed easily and without hesitation, although not seriously throwing you back into your seat as much as you might have expected. Maximum torque comes in from just 1750rpm, and it will give you straight-line wheelspin if you’re too aggressive with the throttle (see video below).

Porsche is renowned for offering serious brakes. Under our usual tests the stoppers on the Panamera performed brilliantly, without any fade or pedal drop whatsoever. Our VBOX recorded a 100-0km/h maximum braking test in just 35.70 metres. This is the lowest distance we’ve recorded so far in any car. 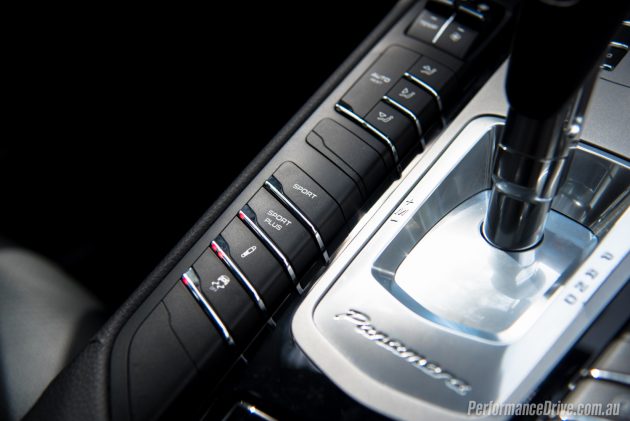 Diesel engines might have a reputation for clattering and being noisy, but not here. Only in some very specific parts of the rev range can you hear that trademark combustion-ignition knock. Porsche has managed to work in its trademark rasp and howl into the exhaust system too, which is nice. With our decibel gauge we recorded just 83dB in the car at full throttle. This is quieter than a Mazda6 petrol.

Of course, being an Audi engine means economy is paramount. During our day driving the Panamera it returned just 6.9L/100km on average. The official average is 6.5L/100km. This makes the Panamera totally ideal for grand touring and everyday commuting.

We are eagerly looking forward to the next-gen Panamera. We don’t think much of the controversial design will change – Porsche has a history of sticking with its design themes – but we do think the new MSB platform will help out with the heavy weight and overall driving dynamics. It should reset the benchmark in the large luxury sedan segment once again.