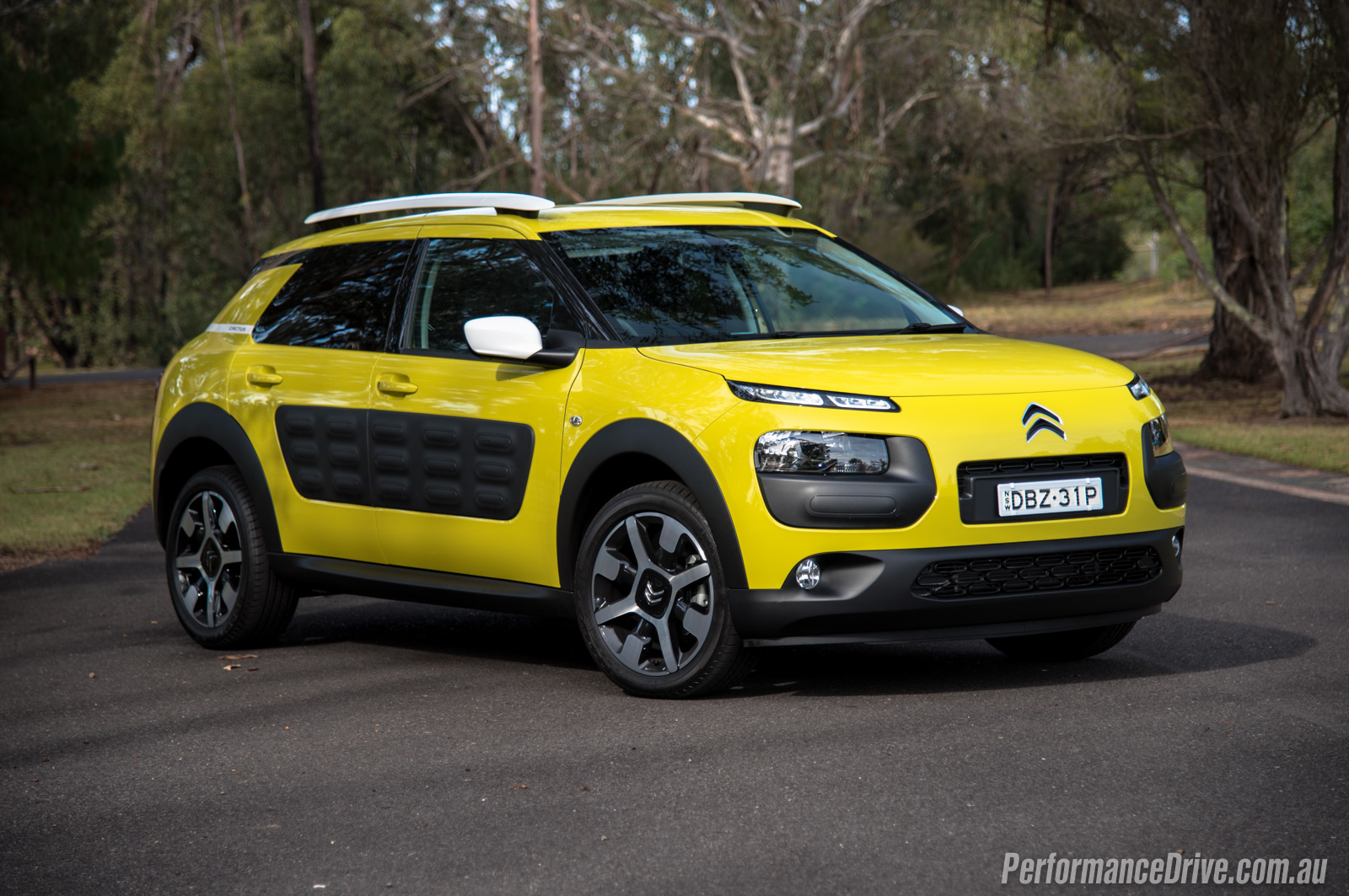 In a growing segment full of ‘me-toos’ and competitive one-upmanship, what a breath of fresh air the 2016 Citroen C4 Cactus is. Despite sharing classification with the likes of Mazda CX-3, Renault Captur and Ford EcoSport, it doesn’t have much in common with them, standing out as something of an anti-fashion statement. Only the Nissan Juke offers a similar distinctiveness, but arguably lacking the fun. 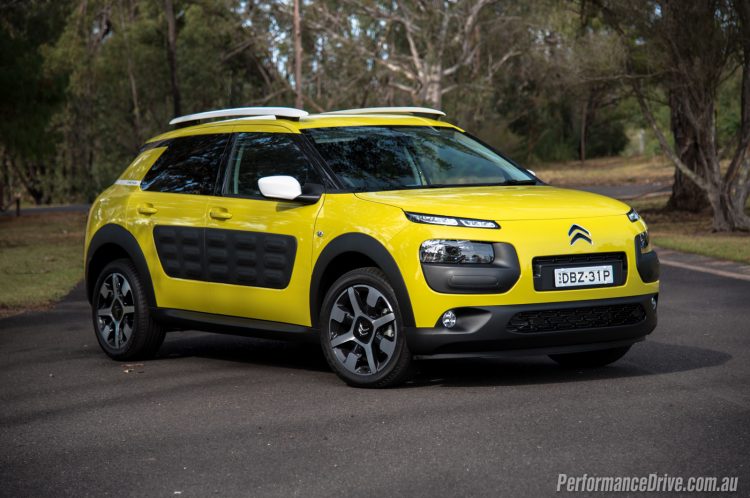 Featuring bold styling inside and out that sets it apart from anything else on the market, the Cactus, which represents a return to Citroen’s quirky roots, has not quite found success in conservative Australia yet; having racked up only 103 registrations since being launched.

It gets its name from its most distinctive feature; pressuried air filled plastic pockets known as ‘Airbump’, which protect it from trolley warfare in much the same way spikes protect its namesake.

There are two models available. The 1.2-litre turbo-petrol three-cylinder, starting at $26,990 with a five-speed manual only, or the 1.6 diesel semi-auto tested here that starts at $29,990 (prices exclude on-roads). Citroen says there are 23,184 possible combinations of Cactus customisations for interior and exterior colour schemes, including the Airbump pockets which can be had in standard black, or optional grey, dune, or chocolate ($400).

Our striking ‘Hello Yellow’ example draws attention everywhere it goes, showing it has a real sense of humour about it. Some compared it to an alien spaceship, while the less generous described it as a ‘melted gumboot’. Looks aside, let’s find out what it’s like to live with on a daily basis. 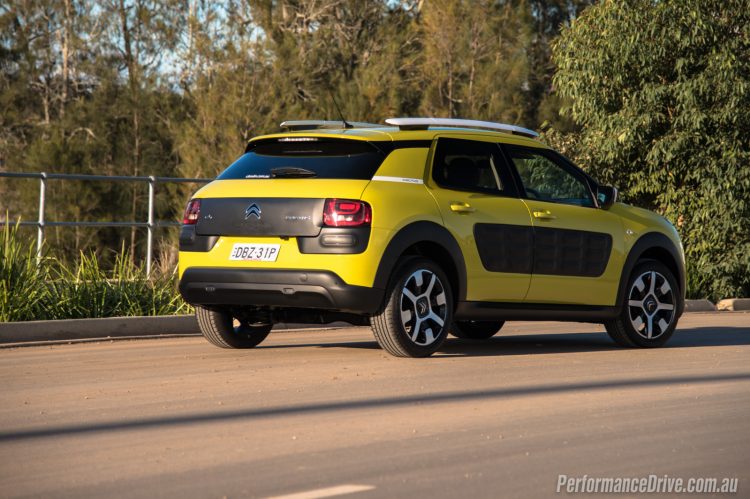 As soon as we clocked onto the C4 Cactus for the first time, we knew it was not going to be just another dull week. The Cactus shares its PF1 platform with the outgoing Citroen C3 and Peugeot 208, rather than using the latest EMP2 platform.

We’ll get the dry stats out of the way now so we can tell you about the Cactus’s most exciting design features. Overall, it is 4.1 metres long, 1.9m wide and 1.53m tall. Bootspace is 358L, with a full-size spare, or 1170L with the rear bench folded down.

It is very light at 1022kg (kerb weight) for the petrol and 1055kg for the diesel. As a result, it promises a very impressive 4.7L/100km average for the petrol and a hybrid-demoralising 3.6L/100km for our diesel buddy here. Safety wise, it enjoys a five-star ANCAP rating.

Outside, the C4 Cactus is no shrinking violet, with eyebrow LEDs over the headlights and funky rear LEDs. Plastic panels are used throughout to imbue the C4 Cactus with a rugged charm. Roof racks (optional white as tested – $250), blacked out A-pillar and unique square-milled 17-inch alloy wheels add to the sense of flair.

Inside, you are confronted by a melange of uniquely French minimalism and cubism. Two screens – one for vital information such as digital speedo, fuel level and warning lights (no tacho), and the other for HVAC, entertainment, navigation and comprehensive trip computer information – sit atop the dash; with the digital speedo offering amazing clarity. The graphics remind us of a 1980s handheld Nintendo, in a good way. 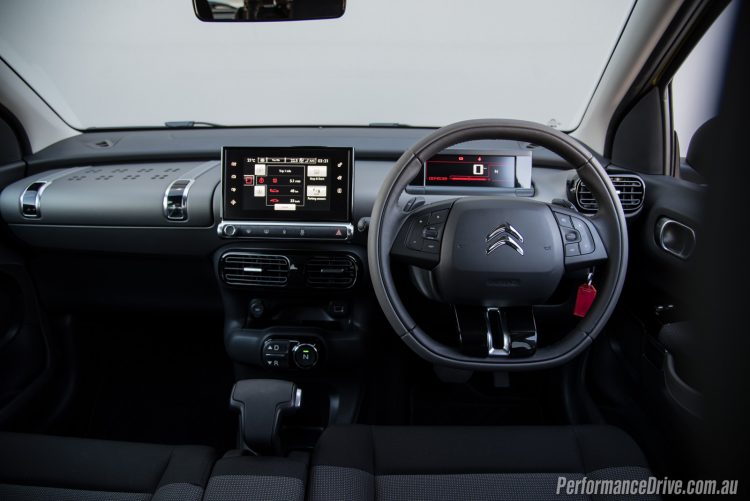 An upward-opening glovebox thanks to a roof-mounted passenger airbag, leather door straps, aircraft-style handbrake and push-button gear selector create a real sense of fun and occasion inside the C4 Cactus.

Best of all, the bench seat is back from the dead too, freeing up front legroom and giving you the option of intimacy with the front passenger. The petrol manual version misses out on the bench – perhaps because nobody can drive a column-shift manual anymore. Headroom and overall rear space is excellent too, thanks to the boxy body. Rear passengers have pop-out windows only, which are tinted a very dark shade.

The infotainment screen is very user-friendly and offers sharp visuals, but is sometimes a bit slow to react. We think it would be better with a few separate manual controls down below or to the side. AM/FM and digital radio (standard) reception is mostly good but the speakers become very distorted as you turn up the volume, registering a peak decibel of 100dB. Visibility is pretty good, but you don’t sit up as high as some SUV rivals. The fixed lines on the reverse camera aren’t as good as the moving guidelines in other cars either, but overall the Cactus is pretty easy to park and move in tight spaces. 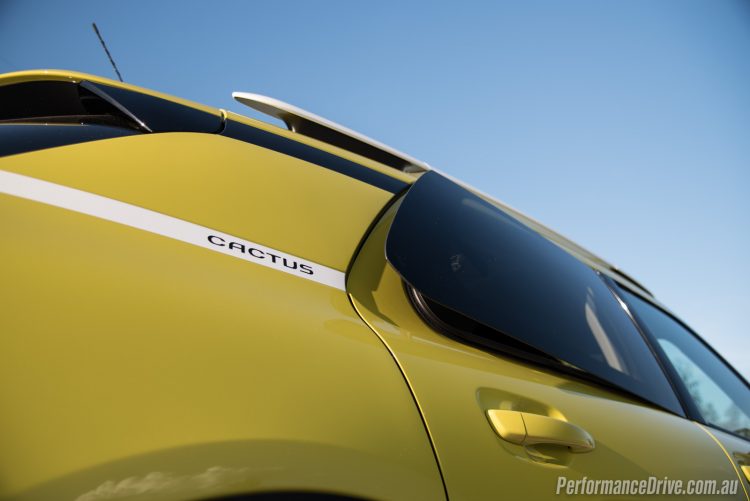 The C4 Cactus starts up with a conventional key, despite looking like it’s from the future. The turbo-diesel engine, which generates 68kW and 230Nm, feels rather modern and refined at idle. Pressing the D button and setting off, the engine remains smooth and responsive, accompanied by very light but nice-feeling steering. Then, all of a sudden, it changes gear.

The C4 Cactus is equipped with a single-clutch automated-manual gearbox. It is regarded as an auto, with no clutch pedal, but the actual mechanics of it all are just like a manual. These types of (now older) transmissions are notorious for possessing jerkiness, and the C4 Cactus is no exception. It jolts noticeably between gear changes as if the brakes are being applied with each up-change.

This is essentially the only downside to the drive experience – at one stage it thumped so hard we thought the Cactus had cacked its dacks (it hadn’t). To be fair, Citroen has chosen this style of gearbox due to cost and weight benefits, with less parasitic loss compared with a conventional, torque-converter auto helping to provide phenomenal fuel economy numbers (more on that later). It is also more forgivable in a quirky car like this, but a normal unit could have seen an increase in sales for Citroen, as would the availability of an auto for the petrol variant.

In the city, the stop-start system is one the best of any car we’ve tested. Unlike systems in VW, for example, the Citroen setup is quick to respond with no hesitation, no dwelling of the starter motor – just ready to go when you are, with the trip computer showing how much fuel it saves. The electric power steering stays active during shut-off too.

Out on the highway though, fuel consumption absolutely blew us away; sitting in the region of 3.4L/100km with AC on at 110km/h. This dropped to between 2.7-2.9L/100km when we slowed down to 90 with the air-con off. That’s barely more diesel than a coke bottle can hold, and the best result we’ve seen in any car we’ve ever tested (except Tesla cars, obviously). Overall, our average for the week was 4.5L/100km, which is an outstanding real-world result.

The C4 Cactus isn’t a car you’d buy to flog around corners at stupid speeds, but we owe it to you, our dear reader, to do so anyway. Despite being easy to place around corners, the unsophisticated rear suspension means there is an unsettling weight transfer when encountering bumps during long sweeping bends. It’s probably best to keep to a civilised pace, where you will enjoy the ride that is simply outstanding at all times; once a hallmark of French cars.

There are paddle shifters to bring a level of sporty aspiration, but no sport mode. The paddles are useful if you need a sudden up or downshift, and you can also time the changes so you can back off the throttle for smoother acceleration, like you’re driving a manual. 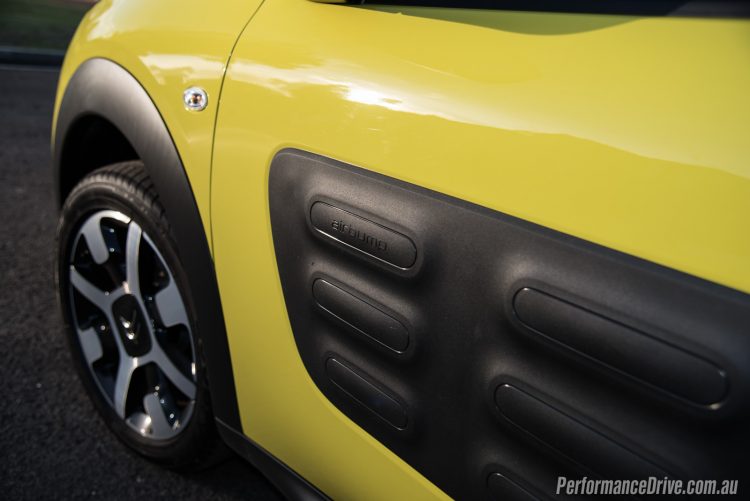 The C4 Cactus is not for everyone. If you do take the plunge, you will enjoy a sense of motoring fun other than sharp handling or outright power. It is not a car you have to worry about becoming obsolete or outclassed. It has a very strong character all on its own, made up from some of its flaws.

With upgraded seats and a new suspension system being planned for a facelift in the near future, we could see the less-than-impressive sales numbers rise. What would go much further is a conventional auto option for both powertrains. With a six-year warranty and phenomenal fuel efficiency, this is one instance where being brave can pay off. We very much enjoyed our time with the Cactus and really hope it encourages more innovative and unique designs from other manufacturers.