US race car driver Tanner Foust has taken quite an unusual vehicle around for a lap at the famously punishing Nurburgring in Germany. At the wheel of a Ford F-150 SVT Raptor high performance off-road ute, Foust shows the Germans that even a ute can tackle the ‘Ring. 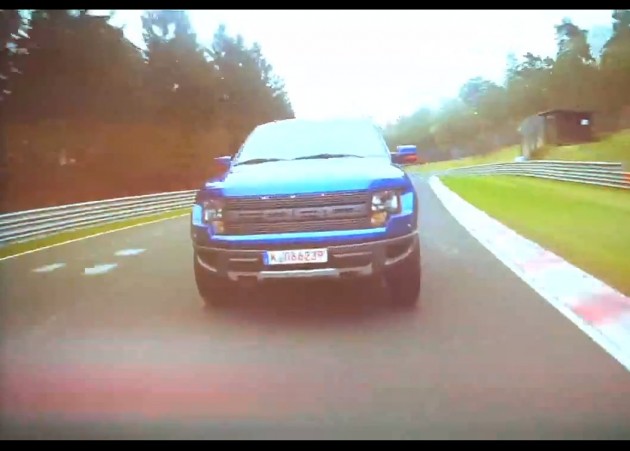 There’s no mention of any times art this stage as the exercise was purely for fun, and the fact that ‘nobody has ever done it before’. Even so, it looks like the big ute doesn’t mind being flung around the circuit, jumping from curb to curb with the odd tail-out slide.

The Raptor looks like a monster of a machine because it is a monster machine. It features a whole host of very serious off-road-ready components such as twin-damper triple bypass Fox Racing suspension, a rear differential lock and a limited-slip for the front, as well as a long-travel high ground clearance with an underbody littered with protection plates.

Up front the big beast is propelled by a 6.2-litre V8 producing 307kW of power and 588Nm of torque. It’s connected to a six-speed automatic transmission and a four-wheel drive system. Basically, the truck has been designed to simply devour any sort of terrain.

Click play below to see how she shapes up on the Nurburgring. It certainly looks like a bag of fun, regardless of its lap time.