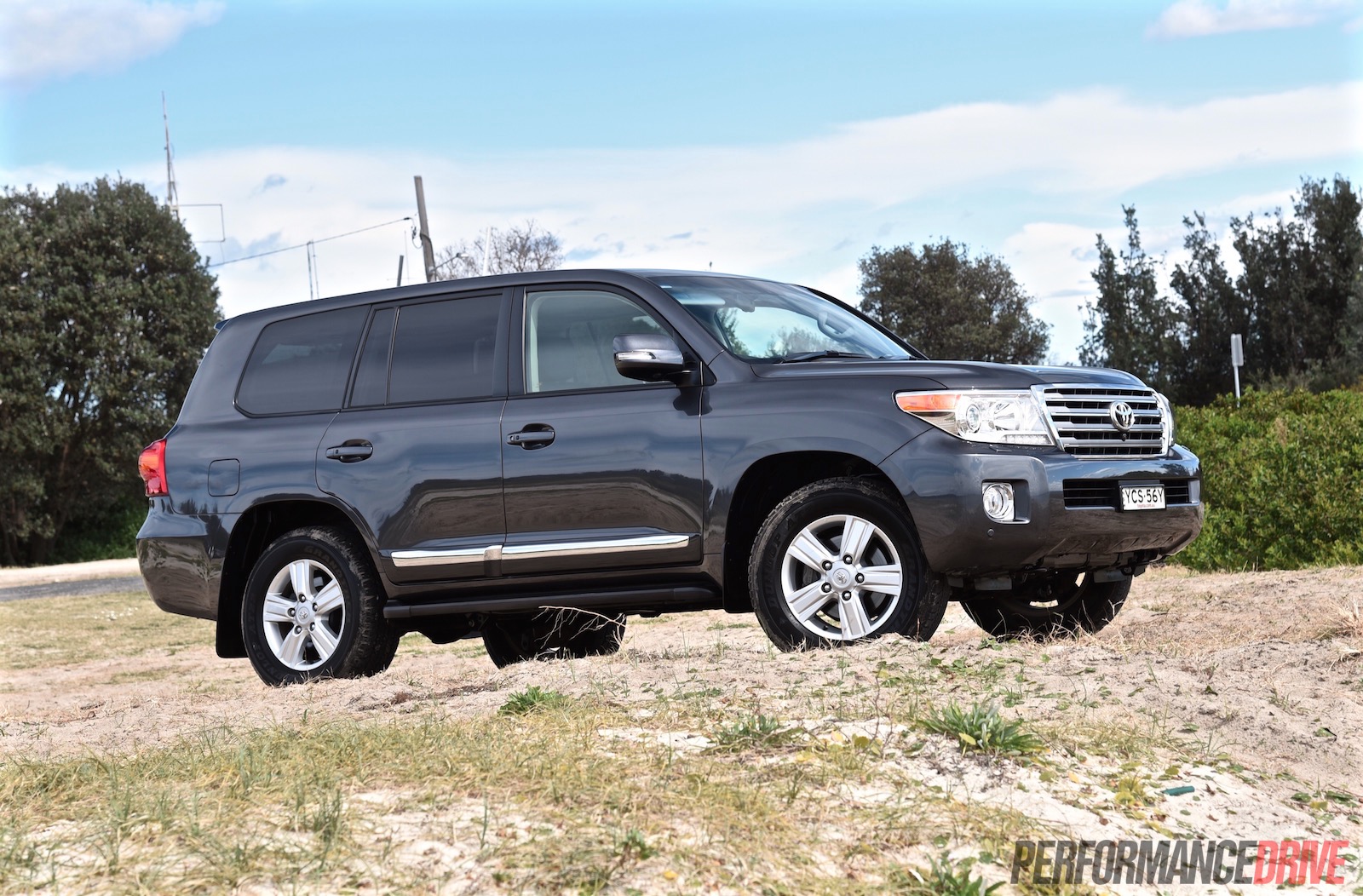 If you’re looking for a vehicle that can take you and your dearest to every corner of Australia, the 2015 Toyota LandCruiser Sahara has the comfort and space of a lounge room, and the confidence of Donald Trump when it comes to off-roading. 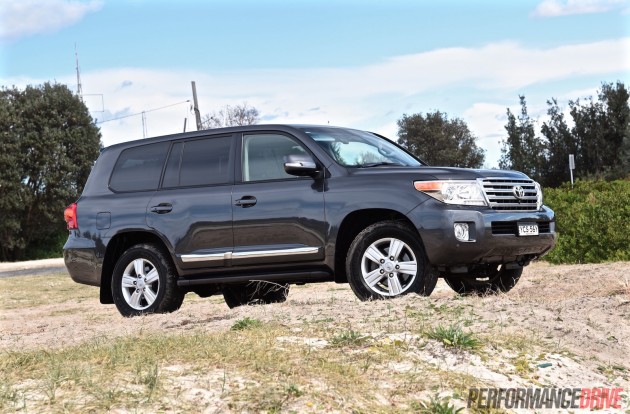 It’s billed as the “king off the road”. Standing just under five metres in length, a shade under two metres in width, and 1.9 metres in height, it is one of the biggest passenger vehicles you can buy in Australia at the moment. In fact, it is longer and taller than even the grand daddy of Range Rover models.

As a result of its sheer enormity, it comes as no surprise it is also the most expensive Toyota passenger vehicle offered in Australia. For the flagship Sahara variant, prices start at $110,600 for the 4.6-litre petrol V8 version, and $113,600 for the turbo-diesel V8 model.

Here we’re testing the top Sahara V8 turbo-diesel variant just before the facelifted model arrives in Australia later this year. Is there still a need for an old hat thoroughbred like this? 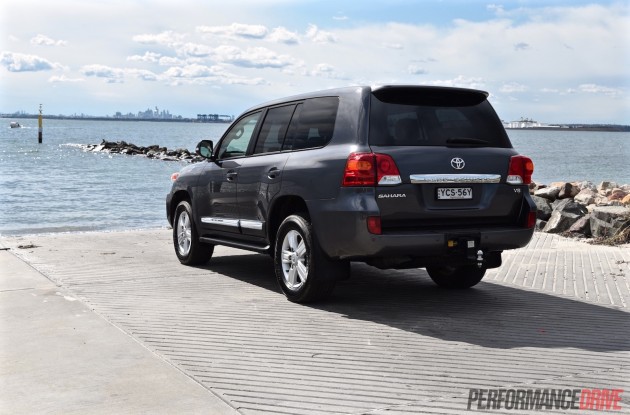 When we tested the 4.6-litre petrol Sahara last year, we couldn’t help but burst out a smile over the utter size of the cabin. It is huge inside. The centre console box, complete with a fridge underneath, is wide enough to sit on. The bulk of the dash reminds us of a tank, and you could almost fit a small human being in the door pockets.

Despite the massive proportions, the floor isn’t as low as you might think. In order to maintain credible off-road ground clearance, the floor of the cabin is quite high and aside from the perched up view, the seating layout is very similar to a large sedan.

There’s no shortage of legroom though, in the front or second row. Headroom is also boundless in either row, with only a flip-down LCD DVD screen potentially taking up some middle-seat move-about space. The third row is one of the largest in the class, with a high floor sapping some of the legroom. Seating is quite deep though so you can slide your bum back for more comfort. Flipping the rear seats up and down can be a bit of a hassle as they do feel fairly heavy and the mechanism isn’t exactly a quick-release hands-free operation. 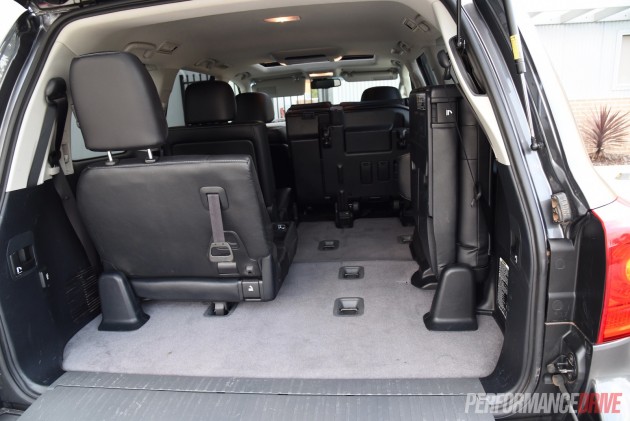 Both rear-seat rows come with their own air-con vents tied in with the four-zone climate control system, with temp controls for the second row. There’s also cup holders for all rows, and a separate entertainment system for rear passengers as mentioned above. This means the kids can be watching a DVD and listening through headphones while the grownups up front concentrate on the business of driving. Front and second row seats can also be heated at the touch of a button for added comfort.

It all feels luxurious and decadent inside, although there are a few hints of Toyota cheapness around the place. Real wood trimmings try their best to contrast some scratchy plastics around the centre console, and some of the buttons and switchgear feels quite basic for a $100k vehicle. The leather upholstery feels more hard-wearing than pampering. You do get a lot of standard features for your money though, including a big touch-screen, sat-nav, power seats, a sunroof, and various external cameras. But that’s not where this vehicle shines. In our opinion, it’s what you get underneath that justifies the price tag. 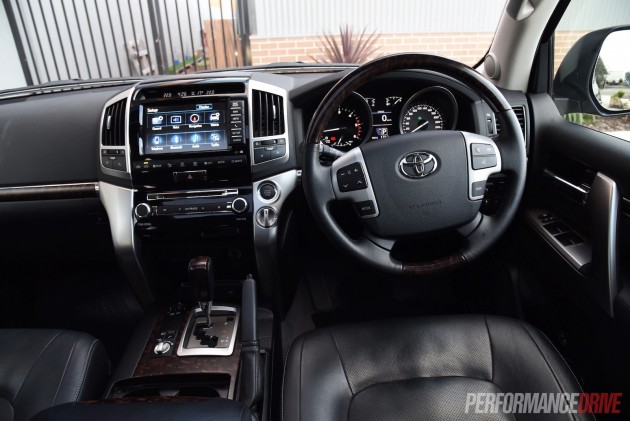 The on-road handling and comfort is suitably relaxing for a vehicle of this magnitude. You can hardly feel road connections and minor potholes along the road, mainly because of the big balloony 285/60 tyres, but also due to the traditional coil-sprung suspension at all four corners (live axle at rear only). This is one of the most soothing vehicles to drive on the highway. It just wafts along like a giant cloud.

Around corners, this behaviour is carried through. There is evident body tip, lean, and everything else that comes with trying to bend a 2.7-tonne beast. Fortunately, the steering system is rather communicative and nicely geared so you always know what the tyres are doing, and it’s neither touchy or overly free or sloppy. We think it’s a good balance, especially considering the off-road potential this vehicle has to fulfil.

Forward visibility is excellent, with unobtrusive A-pillars, low side window sills, and a decent view over your shoulder into the blind spots. You could drive this vehicle as an everyday runaround, although, you will have to get used to the external proportions and the big footprint it requires within lanes. Again though, the steering does make it pretty easy and nimble-ish.

If you’re buying a LandCruiser and you don’t plan on going off road on at least a semi-regular basis, you are wasting your money here. It’s as simple as that. The ‘Cruiser is designed specifically to conquer tracks and to take you to places that other cars dare not venture.

Underneath this road-going rhinoceros is a pedigree-proven, heavy-duty full-time four-wheel drive system. You won’t find any fancy yaw control sensors or special gadgets for traction optimisation here. Instead, this is all about forging progress the old-fashioned way, regardless of the terrain. 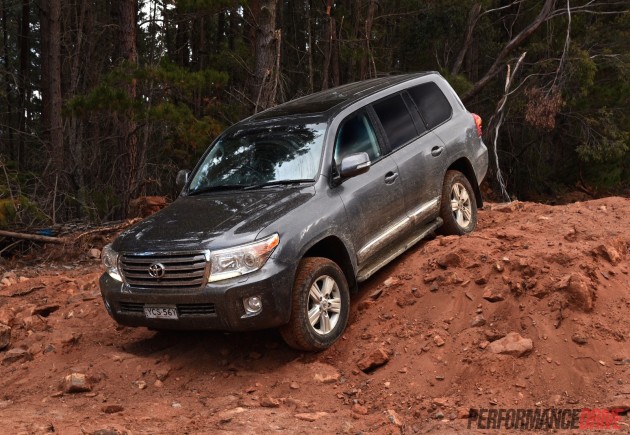 There is high range and low range driving modes, and a locking centre differential (limited-slip in default mode). Sahara and VX variants also get a Multi-Terrain Select toggle with five modes. Underneath is 225mm of ground clearance, which isn’t class-leading. But that doesn’t matter because the way the underbody is designed there is nothing really crucial that hangs down to be snagged anyway.

During our test on rigorous tracks out in Lithgow, west of Sydney, we truly struggled to find a weak spot with the LandCruiser. Engage the locking diff and this thing soars over and through anything like a tank. It is unstoppable. In fact, the only issue we had was the body; the painted front and rear bumper bars on the Sahara extend too low.

We got ourselves into a sticky situation at the top of a climb and couldn’t turn around. So we ended up barging through a mud embankment, literally smashing the Earth out of the way with the 30-degree approach angle and 20-degree departure angle. No other SUV currently on the market would have stood a chance in the same situation – in fact, no other SUV we’ve tested made it that far up the climb. As a result though we did have to apologise to Toyota Australia for scratching the front bumper bar.

Weighing in at 2640kg, with big tyres and fully locked drive to all four wheels, it is very difficult to find challenging terrain for this beast. It is easily the best performing mainstream off-road passenger vehicle currently on the market. Or as Toyota says, the king off the road. 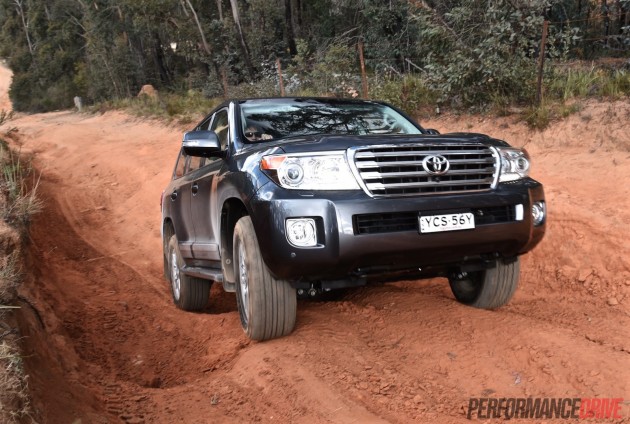 Every month around 700-800 people buy a new LandCruiser. It more than triples the sales of its main competitor, the Nissan Patrol, and out-sells any other large SUV including those from Range Rover and Mercedes or Lexus. We think there is good reason for this. It is a genuine heavy-duty 4×4 with real off-road credentials. Add to that a legendary track record and 60-year-plus heritage, it becomes a recipe that’s just too overwhelming for any others to match.

If you are considering purchasing one, we suggest you wait for the facelifted version to arrive. It’s slightly more refined and more efficient. We’d also strongly recommend the diesel as it is significantly more economical, and it’s actually quicker according to our stopwatch (0-100km/h in 8.6 seconds vs 9.0 seconds in the petrol). 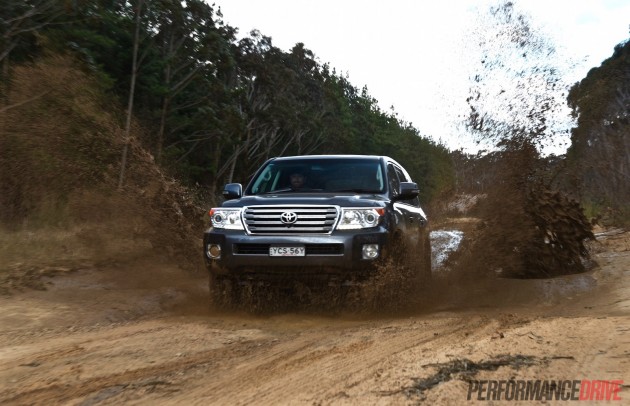