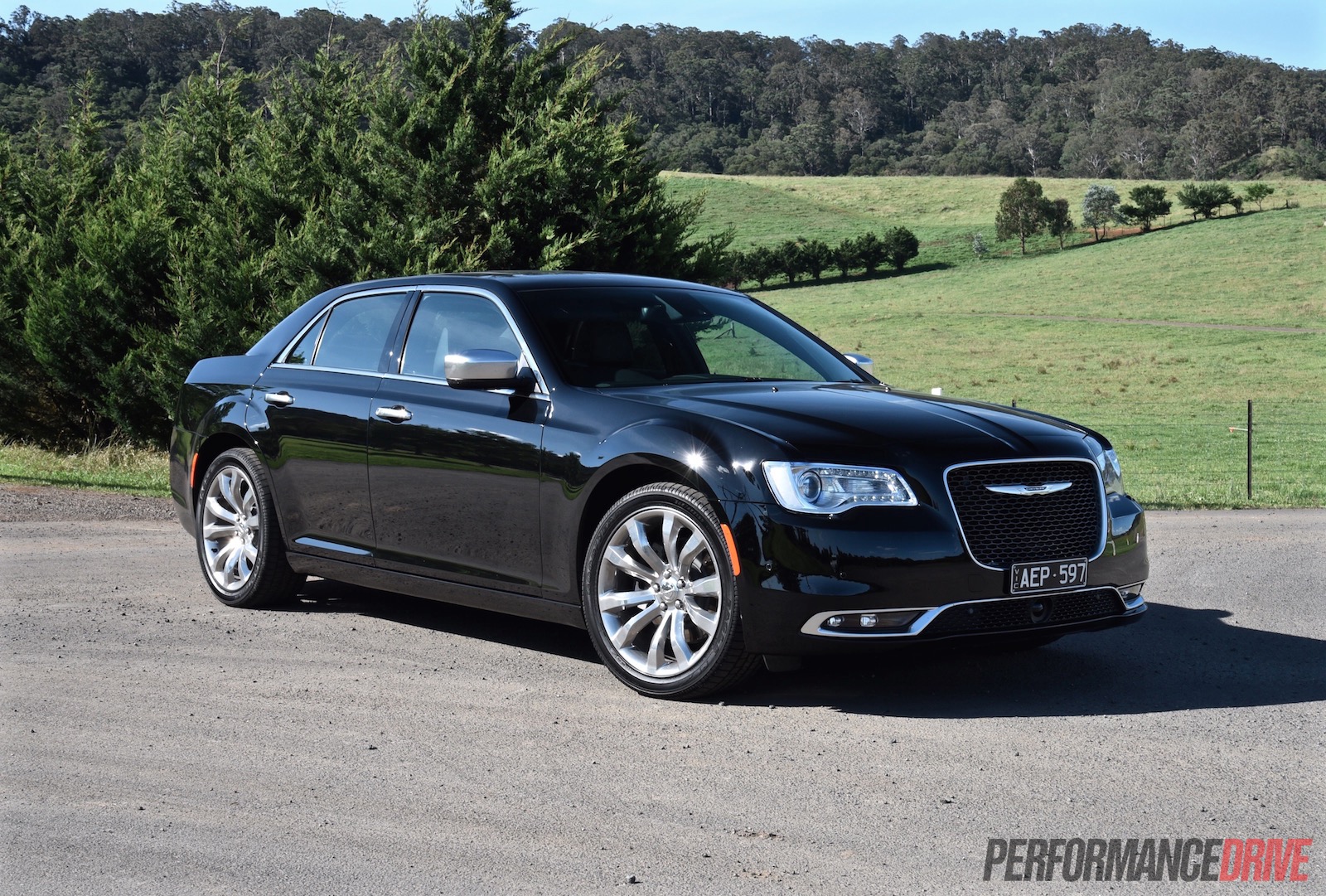 The Chrysler 300C has made a big impact on the world since its introduction in 2005. The first-generation found favour with famous rappers and celebrities alike, with its chiselled, square lines, shallow glasshouse and blistered wheel arches. Often-customised and eponymous with DUB culture (22-inch wheels and larger), the original 300C paid homage to 1950s Chrysler designs while not taking itself too seriously. 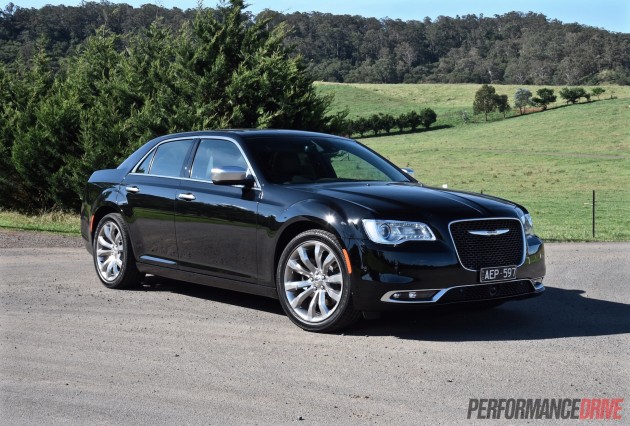 When it came time to replace the easily-recognisable 300C in 2011, Chrysler drew on its new partnership with Fiat to incorporate some European elements, without losing the American flavour which defined it.

With smoother, subtler lines and a cleaner overall appearance, the 300C became less a caricature and more a genuine luxury vehicle. Powertrains ranged from the 3.6L ‘Pentastar’ V6, to the blistering 6.4L HEMI, and it included a 3.0-litre turbo-diesel V6 – a benefit of the Fiat tie-up. As it is also sold in Italy as the Lancia Thema, the rough edges which tainted the reputation of American cars had to be taken care of.

For the 2015 model year (MY2016 in overseas markets), the Chrysler 300C has been subjected to some ‘Bentleyfication’. The newly added mesh grille and front end light treatment works extremely well, while the diamond trim inserts on the door cards give the impression of a far more expensive car than the $49,000 entry price suggests.

Other changes for this model year are a new 8.4-inch Uconnect touch-screen, 7.0-inch display in the instrument cluster, acoustically-tuned interior, and new wheel designs. The interior has also been revised and now includes a three-spoke steering-wheel, and rotary shifter cribbed from the US-market Chrysler 200 medium-sized sedan.

Sadly, an omission for this year is the 176kW/550Nm diesel engine – which we praised for its decent real-world economy and excellent, locomotive torque. That leaves the 3.6-litre Pentastar as the opening batter, which we’re testing here in $54,000 Luxury guise (plus panoramic roof and Harman Kardon sound package). This is the second-tier in the range, with the $59,000 SRT Core and $69,000 SRT sitting above, both with apocalyptic 6.4-litre HEMI-powered brutality (review coming soon).

On paper, the 300C seems well equipped, but does it have the goods to sway buyers from other compelling, rear-wheel drive sedans such as Ford’s G6E, Holden’s well-rounded Caprice, and Hyundai’s superb Genesis? 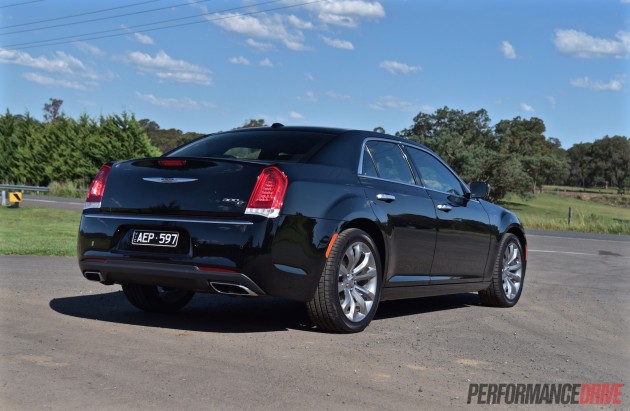 At first glance, Chrysler’s newest additions for the new model give the car a striking, Bahaus almost gothic appearance. The combination of a bold, mesh grille and chiselled 20-inch alloys beautifully complement the straight edges of the car. The proportions, stance and detailing are just right. The wow factor is not solely down to large wheels, the result here is truly more than the sum of its parts. The 2015 300C is straight-up gangsta, in a finely-tailored Armani suit kind of way.

Open the door and things keep going from strength to strength. The Nappa-leather trimmed seats have a rich aroma, augmented by deep pore woodgrain and a neat-looking layout. The level of standard equipment in the 300C Luxury is staggering, and a testament to the progress of American cars. The steering wheel and front seats are electrically-adjustable, with memory settings on the doors. The upper-surround of the dash is skirted in leather, with tight panel gaps and good fit and finish. The only cheap-feeling plastics are the panel which surrounds the touch-screen, the sunglasses holder, and some of the main buttons — but they don’t disrupt what feels like a genuine luxury car.

Other impressive highlights include a backlit analogue clock, heated and cooled cupholders which glow red or blue at night, seat heating in the front and back plus cooling ventilation in the front – the latter an absolute highlight (it is baffling that no modern Australian car offers this, given our climate). 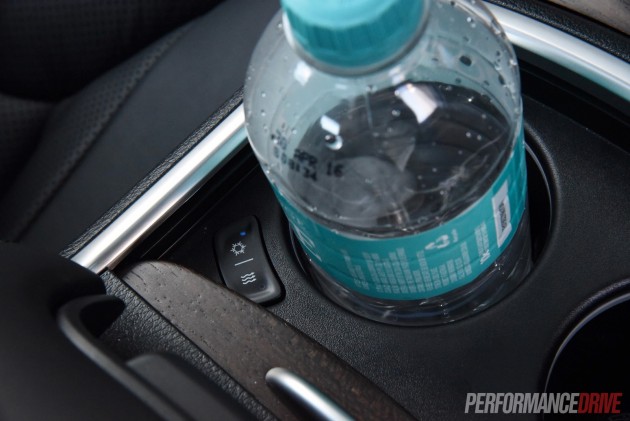 Accommodation for all five occupants is exceptional. Given the car’s 5066mm length and 3052mm wheelbase (43mm longer than Caprice), this is to be expected. Boot space remains the smallest out of the Australian sedans, rated at 462 litres.

Getting comfortable is easy, the seats offer good cushion support, but not much bolstering in the backrest. Some ergonomics require familiarity, such as the nondescript audio buttons behind the steering wheel, as well as some mismatched buttons on the central stack. An example of this is the climate fan and audio volume buttons having the same appearance. Intuitive at first encounter it is not.

The dials have an Aston Martin look to them, but are difficult to read. The digital speedometer available in the (configurable) instrument cluster is an absolute necessity as the analogue gauge looks cool but it is a little too intricate to quickly read. Chrysler’s UConnect system on the large touch-screen offers a generous array of functions, including climate, infotainment, navigation, and settings. Unfortunately, it is slow to load, with Bluetooth and USB taking several moments to boot up every time you start the car. While the main functions are thoughtfully arranged at the bottom of the screen, it is still distracting to operate while on the move.

The Harmon Kardon sound system offers crisp definition across the range, albeit with a heavy bass bias that can’t be shaken. Bass junkies may find an annoying rattle develop in the parcel shelf as the sub-woofer pounds away. It certainly meshes well with the loud theme of the car though.

After drinking all that in, all that’s left to do is disengage the foot-operated park brake, turn the rotary dial to drive to get this player rolling. 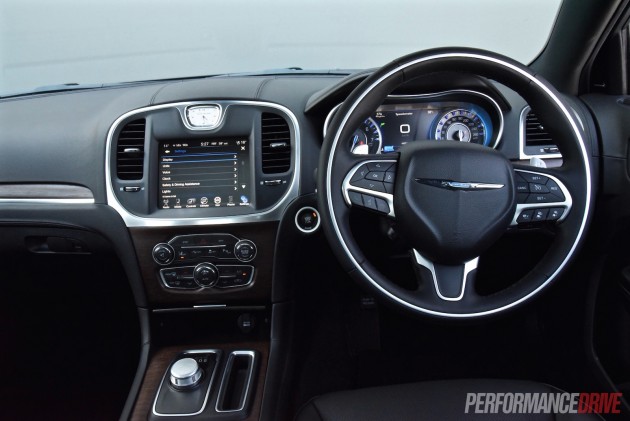 The raison d’etre of the 300C has never been sharp corner carving agility, and that continues to be the case with the new model. The steering is somewhat heavy, but matches the car’s 1862kg kerb weight. There isn’t much in the way of communication, and it doesn’t encourage you to throw it into bends. If you try and defy its nature by doing so, it stays fairly neutral, before the outside front wheel quickly loads up. The Goodyear Eagle F1 tyres do their utmost to keep composure. The 300C responds best to flowing bends, where you can appreciate its (ageing) rear-wheel drive chassis. DSC is not fully disengage-able, which is telling in itself.

Press the (new-for-2016) Sport button, and the ZF eight-speed automatic pleasantly holds shifts. If the steering is lighter, it’s barely noticeable but the throttle does feel a whisker more toey. The best way to exploit the gearbox is via the cool-to-the-touch paddles, which respond instantly to inputs, and keep the V6 in its powerband. Ultimately though, the rest of the chassis isn’t talking the same language.

That the LX platform on which it rides can trace its lineage back to various early-2000s Mercedes’ is worn to death. The replacement may be derived from the Maserati Ghibli and Alfa Romeo Giulia platform, which should be a more lightweight and agile basis for enthusiastic driving.

On the freeway, the 300C comes into its element and shows excellent high-speed stability. The adaptive cruise control is very easy to use, and makes long distance driving a lot less tiresome. Even around the city, the system is impressively precise.

The V6 engine isn’t particularly torquey, offering 340Nm at 4300rpm. It offers a pleasing growl when pushed, though. We timed 0-100km/h in a reasonably swift 7.3 seconds.

The eight-speed gearbox does its best to mask this deficiency and mostly works well. An economy rating of 9.7L/100km shows how hard the gearbox must work to overcome the peaky nature of the engine, as well as the hefty mass of the vehicle. We saw figures as low as 6.8L/100km on the freeway, and up to 13L/100km around the city. An average of 11.6L/100km was achieved, during some very hot days it must be said.

The ride is firm, but always compliant, given the unsprung mass of the 20-inch wheels. Parking is intimidating, but the large display for the rear parking camera and front-sensors help somewhat. Nevertheless, manoeuvring the 300 around tight spots can feel akin to threading a garden hose through the eye of a knitting needle. 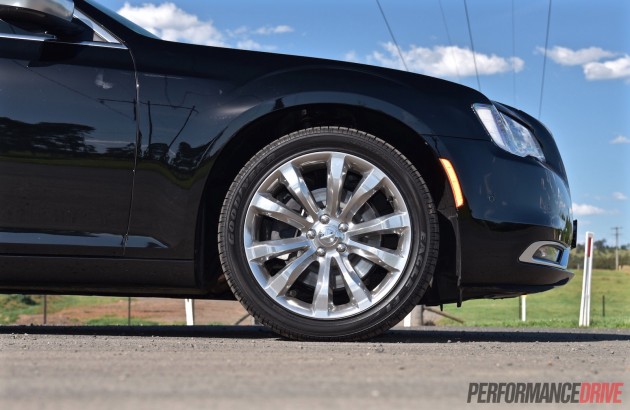 For the outlay, the 2015 Chrysler 300C Luxury offers an obscene amount of car in terms of dimensions, standard equipment, and engineering. For this model year, we can add polish to that list. The attention to detail is superb, and this is not a purchase you will find yourself trying to justify to anyone, while the novelty won’t wear off as quickly as other new cars. What you are getting for the money is a charming homage to American excess, wrapped in European flair and finesse.

While flawed ergonomically, somewhat cumbersome around bends and quite thirsty, none of this detracts from the overall package in our eyes. Sure, the G6E Turbo might be sharper around corners and offer more punch, the Caprice might have more agility and space, and the Genesis might deliver more standard equipment and German standards of finish. But none of these rivals have the character and, more importantly, the swag of the 300C in our opinion.

PROS:
– Distinctive, luxurious styling inside and out
– Standard equipment similar to cars over $100K
– Excellent driver-assistance technology
– Swag
– Stereo (despite rattles on test)

CONS:
– Can be thirsty
– Average steering
– Difficult to park
– Dynamics below class average
– Questionable ergonomics in some areas