Holden’s best-selling car, the Cruze, will make its Australian racing debut (albeit a pint-sized version of it) at the Gold Coast 600 V8 Supercars event in the FW1 Aussie Racing Car Series. 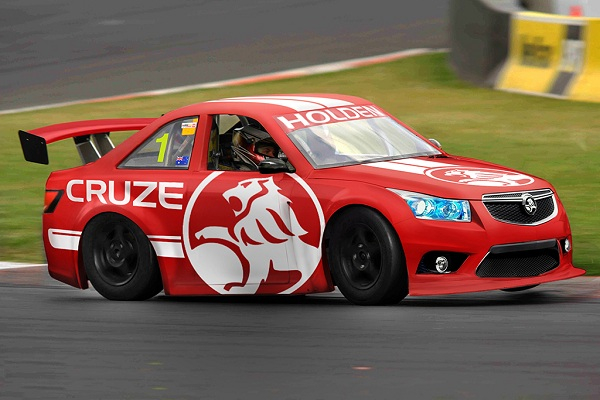 Based on the Cruze SRi, Holden Motorsport will develop a scaled down body to sit on the series’ control chassis which runs a 1.4-litre 16v four-cylinder engine which produces 110hp. That might not sound like much, but the mini racers only weigh in at 450kg so 0-100km/h times are sub-five seconds.

There should be at least one Cruze on the grid in Surfers Paradise, joining VY Holden Commodores, AU Ford Falcons, FJ Holdens, Toyota Aurions and Ford 40s. The first Holden Cruze SRi Aussie Racing Car is currently under construction in Melbourne.

Holden Sponsorship Manager, Simon McNamara, said the Cruze model was perfect for the Aussie Racing Cars which has become one of the most popular V8 Supercars support acts.

“Cruze is the most popular Holden and also the only small car being produced in Australia, and its introduction into the ARC continues our proud and successful history of supporting all levels of Australian motor racing.”

ARC Commercial Director and former Bathurst winner Jason Bargwanna said introduction of Cruze proves the series is on the up.

“Aussie Racing Cars have proven to be one of the most exciting and popular racing categories in the country and with the support and commitment from Holden to introduce the Cruze SRi shows we are on the right track to take the series to a whole new level,” Bargwanna said.

“The Holden Cruze looks awesome and we are full steam ahead with the construction of 20 new race cars.

“With new cars, new drivers and a fresh new energy and attitude, the ARC is the perfect category to kick off a racing career.”