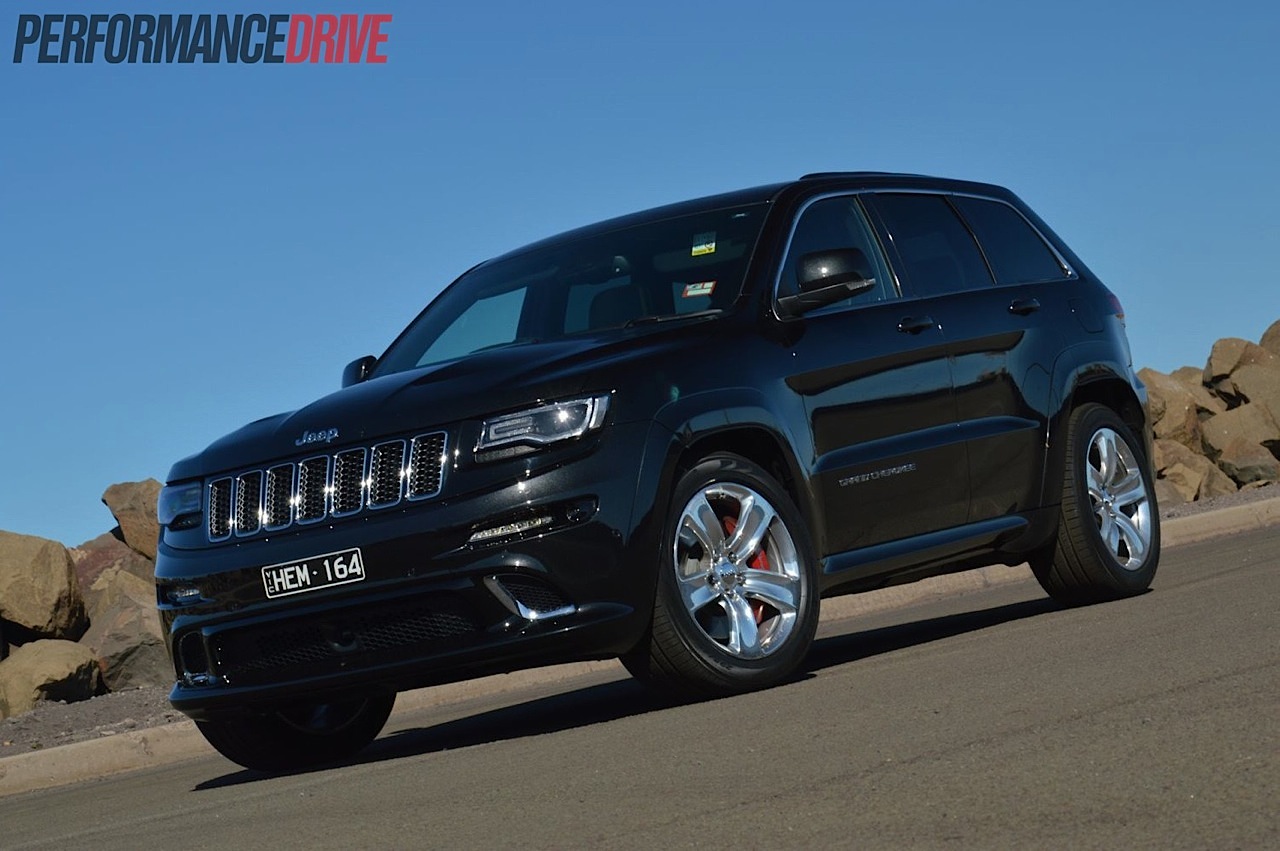 You may have heard of the Finnish tradition, jumping straight from a hot sauna and into the icy cold snow. It’s meant to be invigorating for the body and soul. We think we’ve found something better; pressing the start button in the 2014 Jeep Grand Cherokee SRT, fresh in the morning. It literally rumbles life through your system. 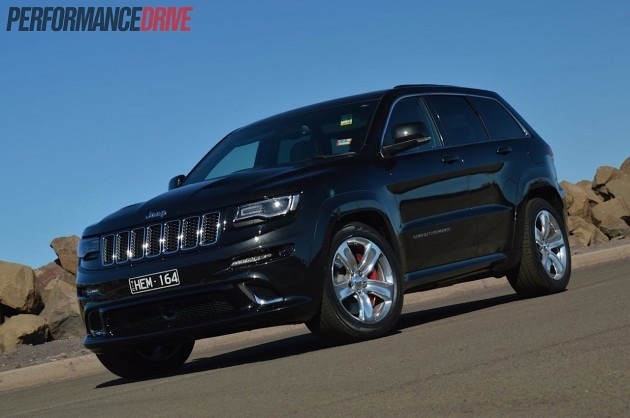 The 2014 Jeep Grand Cherokee has been enjoying some very successful sales over the past few months. In fact, during July, August, and September this year it was the best-selling vehicle in its class (SUV below $70,000), according to the official VFACTS national sales figures. And with each month, sales are increasing and increasing, going from 1196, to 1319, to 1402, respectively.

For the 2014 version, Jeep added one fairly important and significant ingredient to the range; a ZF eight-speed automatic. This replaces the old five-speed auto. There’s also some revisions to the interior with an improved infotainment system, lower price points for some variants, and minor styling tweaks on the outside.

A new rear-wheel drive entry-level variant has been added to the range too, for those wanting the perched up character of a large SUV while embracing the efficiency of a two-wheel drive.

As for this. This chisel-jawed, steroid-munching, thunder on wheels keeps the pounding 6.4-litre HEMI V8 and its 344kW, and the SRT performance underpinnings. It too gets the eight-speed auto, so now it’s even quicker than before.

Prices kick off from an extremely tempting $77,000. It might sound like a big price tag but this is a big car that goes up against some big competition, most of which cost twice as much. 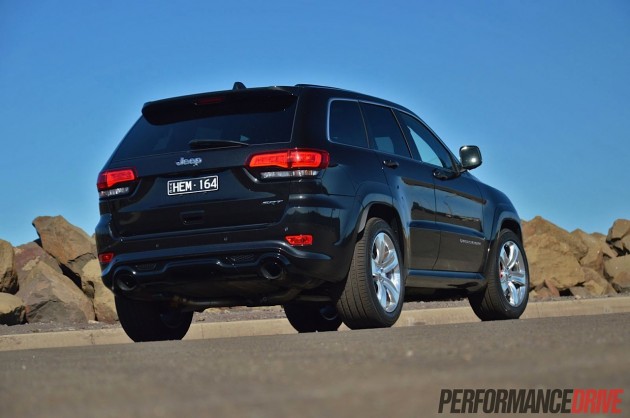 Jumping up into the Grand Cherokee SRT is a bit strange at first. You’re immediately greeted with convincingly sporty half-leather half-Alcantara bucket seats, yet, you’re perched up because you’re in a large SUV. It feels nice. It feels quite special, like a sports car, and you sense a distinct aura around you like something tremendous is just about to begin.

Accommodation for front passengers is airy and fruitful. There are lots of gadgets to play around with, chief among which is the new 8.4-inch ‘Uconnect’ touch-screen interface. It incorporates all of the on-board features and controls, including the awesome SRT Performance menus with acceleration timers, g-force gauges and engine power gauges.

Uconnect is essentially Chrysler-Jeep’s connectivity platform, capable of pairing with smartphones and Bluetooth/USB and so forth. It also includes Voice Command and a full satellite navigation system as standard on the SRT.

Using the new interface is easy, with main menus spread across the lower screen. A word of warning though, there is a ‘sport’ mode button for the dampers which is almost hidden away within the SRT Performance menu. We only found this feature after browsing around in the depths of the system, almost three days into our drive.

As mentioned above, the price might seem high but you do get a lot for your money. Some of the standard features are impressive, with advanced creature comforts like heating and cooling front seats (heated rear seats), a heated steering wheel, a good radar cruise control system with adjustable distance control and auto braking, and a new complete-TFT LCD instrument cluster for the driver. The beauty of a full TFT layout is the driver can customise the display, with options to swap to an analogue or digital speedo, and toggle live readouts for the SRT functions.

The other main controls that you’ll want to play with are of course the driving modes. Down near the updated gear selector you’ll see a rather encouraging dial, and an even more encouraging button that simply says ‘launch’ with a Christmas tree light stack next to it – a fairly simple launch control system. Driving modes range from Snow, Tow, Auto, Sport, and Race. Race is the one that gets the heart palpitating.

As for cabin space, like the SRT’s ego, it’s big. There’s heaps of room in the front and equally as much in the rear, catering for all passenger types, short, tall and/or fat. The cargo capacity in the very back is rated at 782 litres, expandable to 1554 litres when the 60/40 rear seats are folded down. 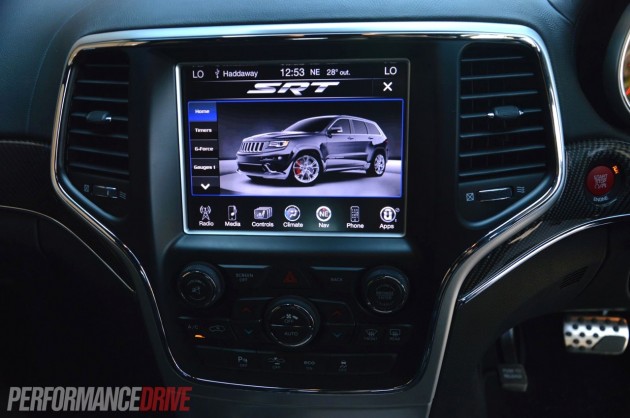 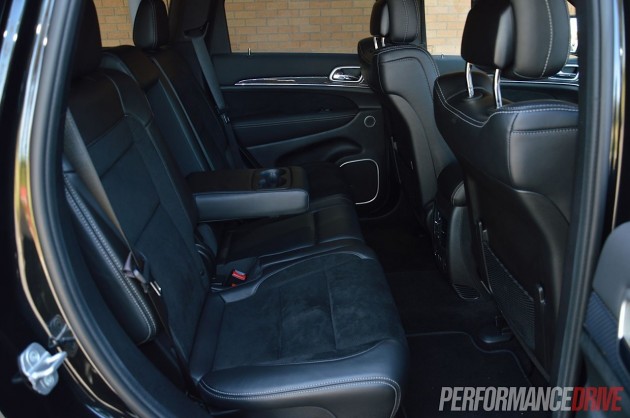 There’s so much road presence with the SRT. Other motorists are either giving you a gingerly grin, like a shy girl at school making eye contact with the notorious yet attractive bad boy, or motorists simply get out of your way – often when they’re not even in your way. In other words, this monster gets a lot of respect on the road.

It’s a massive American SUV, manufactured in Mexico. How does it handle? Does it feel like it’s going to fall over going around corners? Fortunately, no, it doesn’t feel at all like it’s going to turn belly-up at the sight of a bend. It feels awesomely solid in fact, and meaty and planted. It actually doesn’t feel that heavy behind the wheel either, despite pressing 2289kg onto Earth.

Jeep has trimmed around 47kg from the SRT’s stomach since the 2013 version, and although that isn’t really enough to see any major benefit, the previous version felt pretty light on its toes as well.

Part of this buoyant and agile feeling, at least initially, is down to the quick rack and pinion steering. It uses a gear ratio of 17.5:1 against the regular Grand Cherokee’s 18.7:1. The drawback of this setup is slightly touchy highway behaviour, like in the previous model.

Turn in with some aggression and the big bruiser will follow around with impressive immediacy. There is a slight after-shock moment as the body keeps up with the underpinnings, but only when you’re really pushing it. The level of communication through the steering can become a bit vague and slow to respond if you try and drive it like a nimble sports car.

Tthe best thing about this vehicle – the element that is metaphorically the life of this party – is the engine. If you’re buying the SRT because you want to go to track days every month, you’re probably in need of some medical help. No SUV is going to bring you the level of handling and engagement of a car, which has a much lower centre of gravity.

The engine. It’s a masterpiece as far as we’re concerned. But not a masterpiece like an intricately detailed piece of art. More a masterpiece like a quality six-burner BBQ on a nice summer’s day. It pushes all of the right buttons and gets everything done. For one, it sounds bloody fantastic, especially on the overrun. It rumbles like a high-horsepower street machine. It also rampages its way to the relatively high 6800rpm redline, pulling you with it like a train carriage. The best 0-100km/h time we managed was 4.9 seconds, which is 0.5 seconds quicker than the five-speed auto 2013 Grand Cherokee SRT8.

Despite being an enormous engine, fuel economy isn’t as bad as you might expect. We averaged 16.1L/100km during our test, which was mostly made up of a self-indulgent driving style. The official average is 14L/100km and the engine has passed Euro 6 emissions laws which aren’t even in place until September 2014. Economy has improved from the previous model’s 14.1L/100km figure.

When it comes time to slow down, the initial bite from the huge Brembo brakes is strong and powerful. There is some evidence of fade with repeated abuse.

Being an SUV, you might want to take this beast off the road at some stage. The natural ability of the Grand Cherokee is very good, with suitably designed approach and departure angles (26 degrees and 24 degrees front and rear) and decent ground clearance.

The SRT version doesn’t come with Jeep’s air suspension or the Quadra-Drive II transfer case with low range. Instead, it gets a more sporting Bilstein suspension setup with adaptive dampers and a full-time electronically controlled all-wheel drive system with an electronic rear limited-slip diff.

It’s off-road performance is decent with virtually zero traction loss, however, if you’re planning on tackling some really rugged terrain the low-profile 20-inch tyre and wheel package will be your main hindrance. 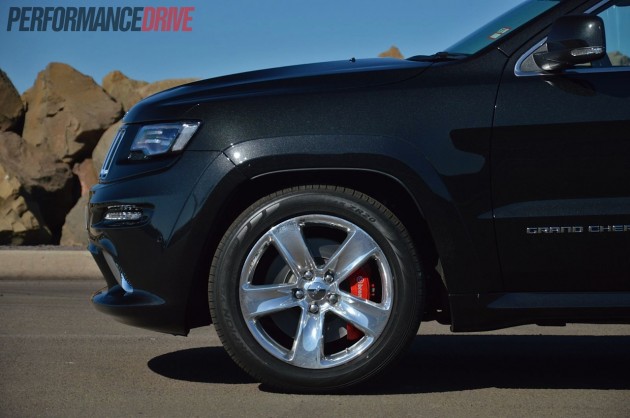 We reckon it’s an awesome vehicle. Sure, it’s not as refined or as efficient as most things from Europe and it might not be as practical or as cheap to repair as most things from Japan, but that’s not what this beast is about. It’s as far away from boring as you can get in the (standard production) automotive world, reminding us that cars needn’t always be so sterile and sanitised.

It’s a fun event each time you drive it, and it celebrates motoring and gets you excited about driving on more than one level. And for that, we’ll say it’s one of our favourite SUVs currently on sale. Well done, Jeep. Thanks for putting a smile on our – and many other – faces.

PROS:
– Thumping V8 performance
– Reasonable price blows the competition out of the water
– On-board SRT performance computer
– Bilstein suspension – although it might be a bit firm for some
– Road presence and muscle machine design
– New eight-speed auto is a gem

CONS:
– Overall refinement not quite up to international standards
– Big Brembo brakes overheat after a few decent-speed hard stops 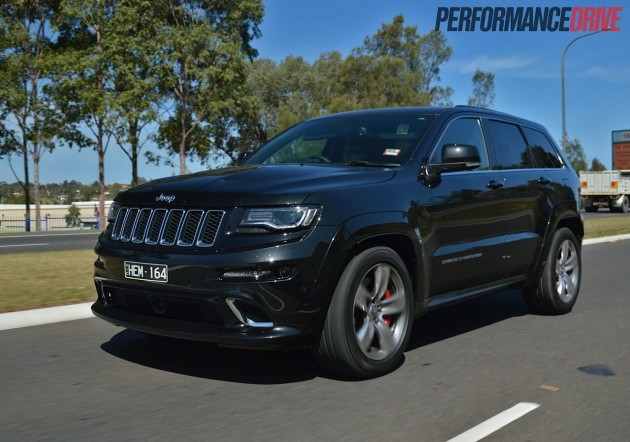