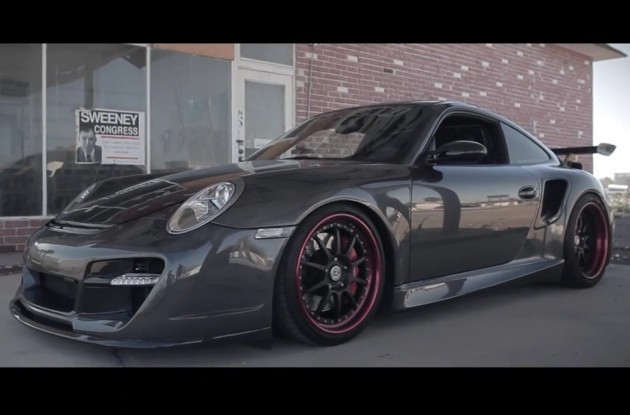 Vivid Racing has been building the Porsche for some time, slowly documenting various build aspects as it goes. It has since cracked 332km/h at the Texas Mile, and laid down 825hp from its 3.8-litre flat six engine.

Obviously, the engine has been administered with a healthy dose of upgrades, including GT3076rs twin-turbochargers running 23psi of boost. It also features a Softronic Tune engine computer remap, and a custom Valvetronic exhaust system with an in-car switch to swap from street to race settings.

On the outside, the Vivid Racing VR825 Porsche 911 Turbo features a full Vorsteiner VT-R bodykit and a lightweight Vorsteiner Clubsport carbon fibre bonnet. Matching the theme are a set of racing lightweight HRE C93 19-inch alloy wheels, measuring 8.5 inches wide on the front and 11 inches on the rear. The outer lips are coated in a House of Kolor red for a bit of contrast.

Ensuring the mighty beast stays flat and true while accelerating at ballistic rates, Vivid Racing has fit a full KW Variant 3 suspension coilover kit, and Agency Power sway bars and various joints and bushes. The upgrades allow the body to sit perfectly over those deep-dish wheels.

Vivid Racing has since sold the epic build but has put together a neat video, as seen below. It was filmed in Arizona on the street and partly on the track. Nice work guys, we look forward to a 991 Porsche 911 Turbo build…