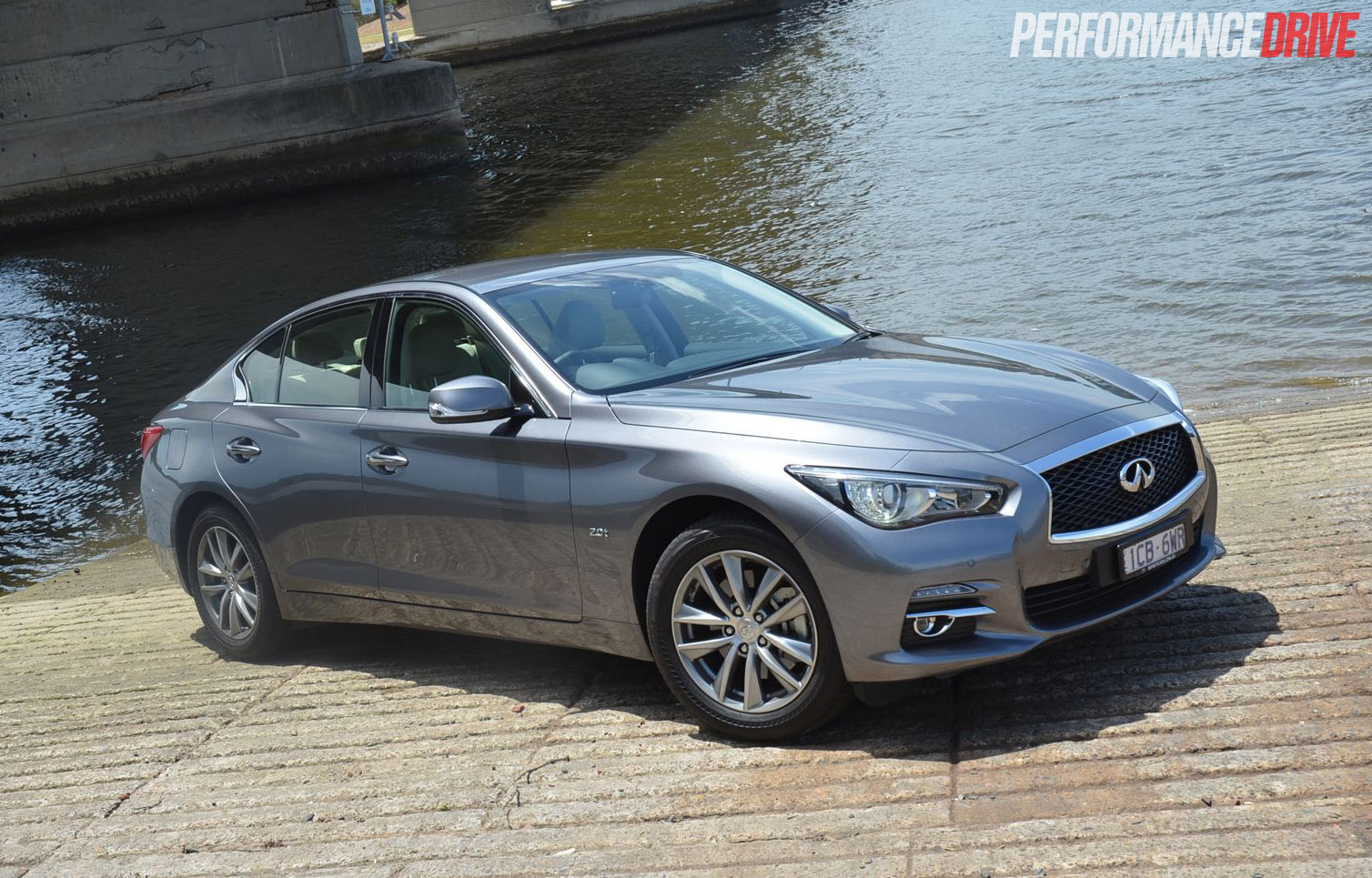 With the introduction of the Q50 2.0t, Infiniti has armed itself with a sedan to tackle the entry-level mid-size premium sedan segment. Lurking in its shadow are cars such as the Audi A4, BMW 3 Series, Lexus IS, and Mercedes-Benz C-Class, all of which offer an impressive heritage. Can the newcomer compete? 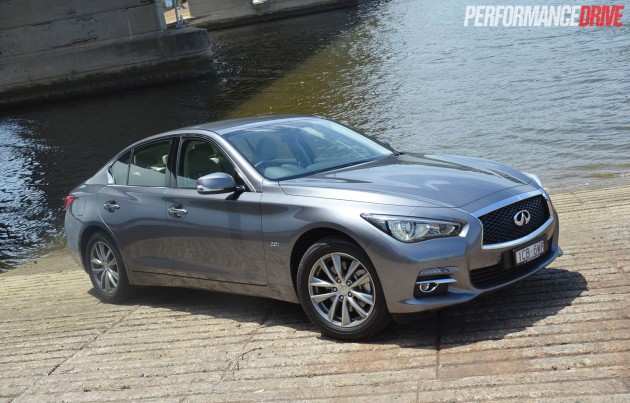 Starting from just $50,900, the GT 2.0t model not only sits as the least expensive way to get into an Infiniti vehicle, it’s also the least expensive model in its segment. The GT model comes in to join the slightly more expensive ($51,900) 125kW/400Nm 2.2-litre turbo-diesel GT as the only other entry offering – introduced when the Q50 was first launched in early 2014.

The 2.0-litre turbo petrol engine is borrowed from Mercedes-Benz, delivering 155kW and 350Nm. Bolted up behind the engine is the same seven-speed automatic transmission which is featured across the Q50 range. This is the most powerful entry model in its class by some 20kW and 50Nm.

Although the Q50 might be a new nameplate, it’s underpinned by the same Nissan FM platform that is used for all of the Q models, as well as the Nissan 350Z/370Z, and Nissan Skyline. Like the BMW 3 Series, Lexus IS, and Mercedes-Benz C-Class, the Q50 uses a rear-wheel drive layout. 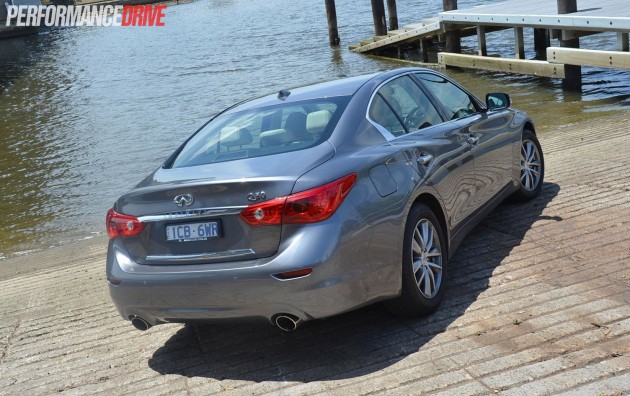 Step inside the Q50 and you’re greeted with an interior that impresses. The cabin is quiet and comfortable in all five seats, and the leather-faced seat upholstery is soft and uses and arrangement of perforated and smooth finishes to create a premium look. The cabin is also treated to a variety of smooth silver, faux carbon fibre, and soft-to-touch trimmings.

And while the overall feel of the cabin is certainly more Japanese than European, we doubt buyers of the German brands will turn their noses up in disgust. The two-tone trim in our GT test model gives the cabin a nice contrast of dark and light to help break up the overall look, but if we might be picky for a second, the dash design loses some points in that it looks a tad too symmetrical; you can tell this is a car built mostly for right-hand drive markets. It doesn’t mean it’s hideous, but it doesn’t help to give the car a unique look.

Falling nicely into your hands is a soft leather steering wheel, which is made even more enjoyable thanks to a snug driving position. All of the controls are easily at arm’s length, leaving you to sit back and enjoy the comfortable seat and supple ride (but more on that in a second).

All the gadgetry and knobs in the cabin feel sturdy and well made, and are placed in a well-organised manner that helps the interior to feel clutter-free.

The Infiniti InTouch interface system that sits in the middle of the dash consists of two screens, and is, in our opinion, one of the best systems to both use and look at in this class. The system offers full digital radio reception, Bluetooth and USB connectivity, and satellite navigation as standard on all models. It also plays home to the dual-zone climate control system, phone connectivity settings, general information, and the on-board tyre pressure monitor.

The bottom screen works in much the same way as a handheld tablet does, letting you browse through menus and view information via its touch screen. It does tend to get dirty easy though, leaving you to constantly wipe it clean (a soft cleaning cloth is provided). The GT misses out on the thumping Bose sound system of the higher variants, but the standard six-speaker unit produces decent tunes. 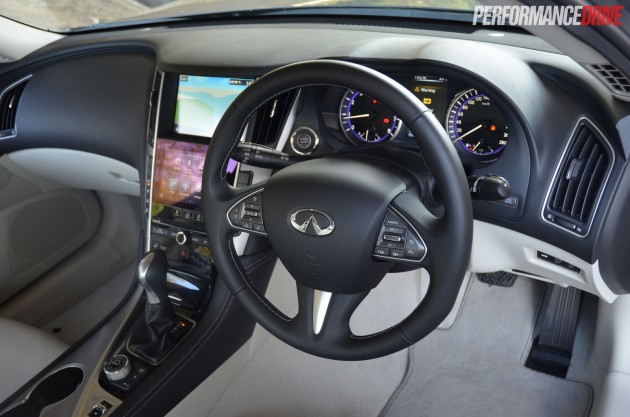 While we ummed and arred about the drive in the Q50 Hybrid, the rear-wheel drive Q50 GT 2.0t is a more rewarding driver’s car. The engine provides proper push off the line, leaving the tyres nervous under full acceleration. From there on quick bursts of acceleration are easily achievable with a prod of the pedal.

The only thing that hinders the performance of the Q50 once moving is the seven-speed gearbox. At times it can be quite indecisive, and gear changes aren’t exactly what you’d call lightning-fast. When using the Q50 for day-to-day duties the gearbox operates in a smooth manner, flowing through gears early with fuel consumption in mind. There’s no shift paddles on the steering wheel if you’re looking for some driver involvement, leaving you to slide the gear lever across to plus and minus mode for any kind of manual mode. Even then, it’s not inspiring and best left in drive.

With peak torque coming in at just 1500rpm, the Q50 never feels sluggish or lacking in performance. From the get-go it’s happy to rev freely and offer turbo-lag-free acceleration. We timed 0-100km/h in a respectable 7.3 seconds, which is not bad considering the Q50 sits at a hefty 1646kg. The sound of the engine isn’t anything to write home about, nor is the exhaust note exiting the rear. But from within the cabin the engine is silky smooth during all periods of driving.

With the base model GT you get a mechanical steering setup in light of the Direct Adaptive Steering system (electric) found in the higher spec S, S Premium, and Hybrid models. The mechanical setup communicates well and doesn’t throw any funny surprises your way. Like the DAS, though, it does feel slightly over-sensitive at times. For example, if all you want to do is switch lanes you can overshoot or misjudge it, but this will only occur for a short while until you become accustomed to it.

Point the Q50 GT 2.0t’s nose towards a series of bends and you’re set for a smile or two. The suspension works well to provide the driver with confidence, soaking bumps and lumps up in its stride. It’s one of those cars that makes light work of driving, be that to either make up serious ground on the freeway, shoot up a winding hill, or plummet down a rough rural road.

Being a luxury-focused model there is some evident body roll. But the car remains planted and leans with confidence into corners, allowing you to swiftly change direction without feeling like the car’s working against you. Brake pedal feel is also quite strong, never succumbing to any kind of fade during repeated pressings on our test route.

During our test we averaged 9.0L/100km during combined driving conditions, which is above the official figure of 7.3L/100km. We’ll admit that we were probably using the go-pedal a little too much, given the 350Nm on offer at 1500rpm gets things going so well that you just want to keep your foot into it. 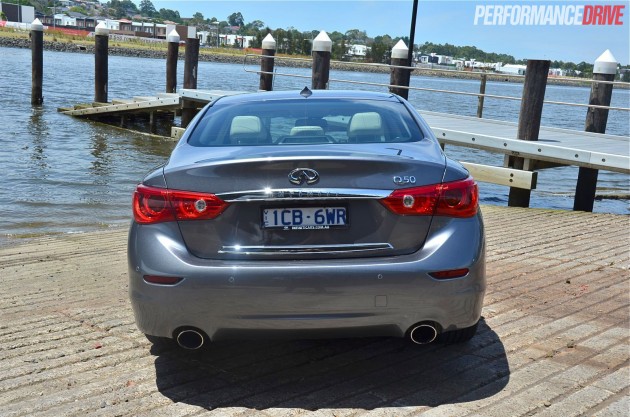 What you get with the entry-level Q50 GT 2.0t is a mid-sized sedan that has a premium feel and premium tech but doesn’t come with a premium price tag. The steering might be a little to sensitive for some and the gearbox a touch on the lazy side to be classed as a really good ‘driver’s’ car, but nonetheless the Q50 is a capable yet comfortable sedan. It’s also one of the best value in the segment.

If you want cheap luxury without the ‘cheapness’, the Q50 is a very impressive proposition. Sure, the higher-spec models do offer improved features and technology, but what the GT offers as an entry model is impressive. Nearly all of the onlookers we had query the sedan thought that it was worth a lot more than $50,900 (plus on roads). With its sharp looks, and sporty driving dynamics, the many onlookers have a point.

CONS:
– Gearbox can be indecisive
– Steering too sensitive 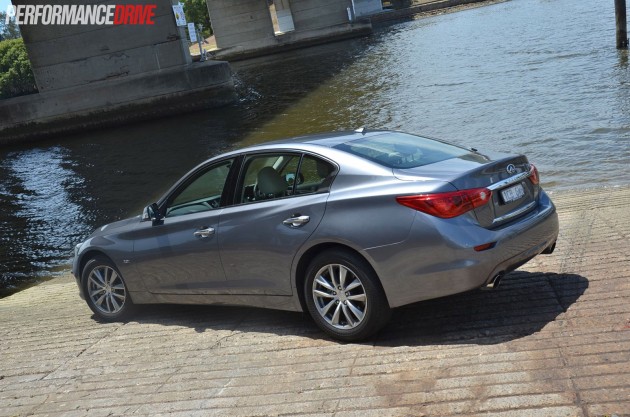