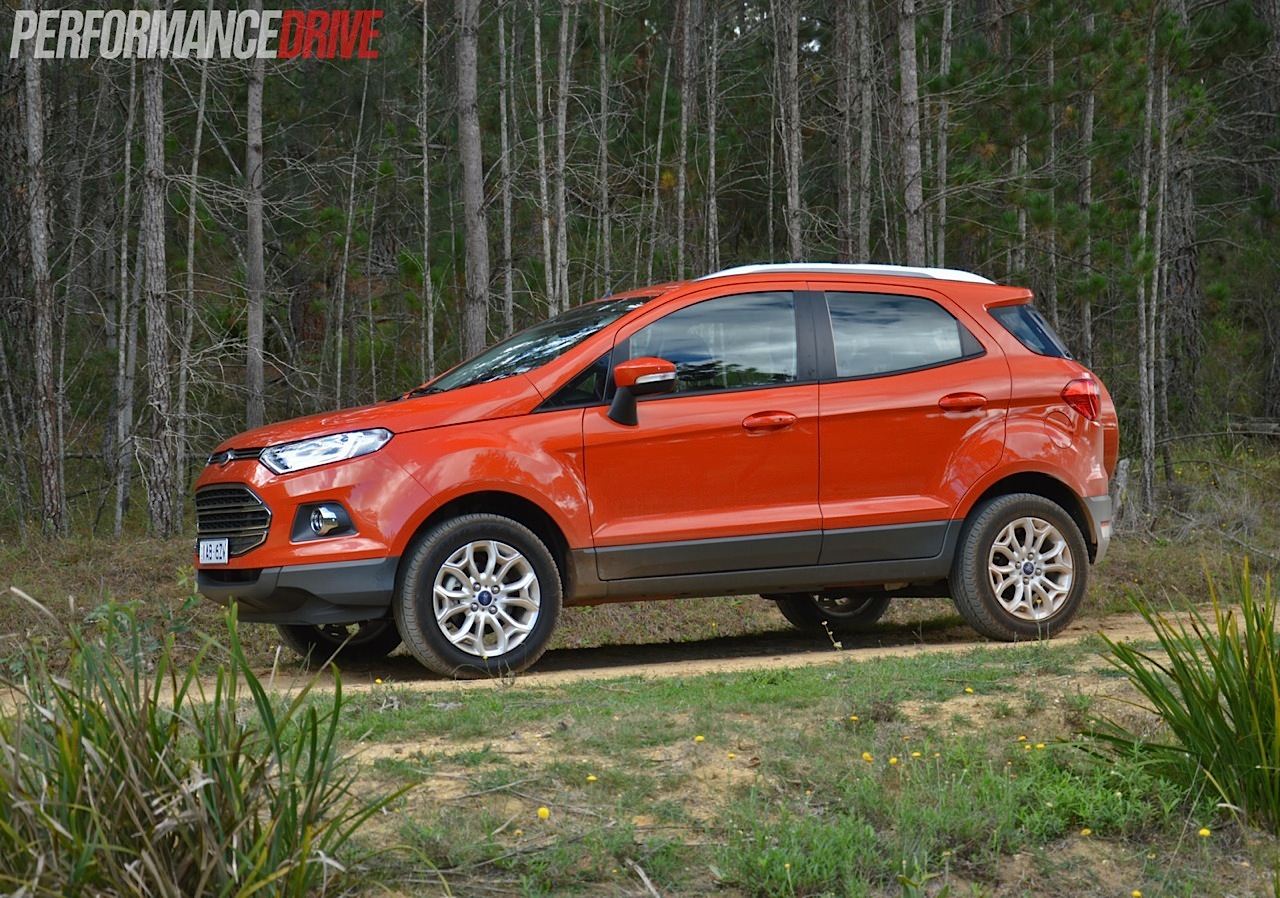 Get ready Australia, these tiny, ultra-efficient, happy-go-lucky SUVs just like the new Ford EcoSport 1.0L EcoBoost are going to inundate the roads soon, with almost all manufacturers offering one or at least planning to have one in the showroom in the near future. 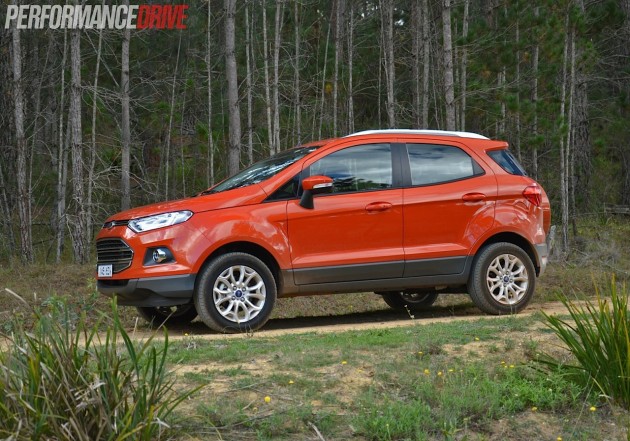 Ford Australia is gearing up to produce its last-ever Falcon, which will be followed by the closure of all local Ford factories in 2016. It’s going to be sad times ahead for fans and of course the hundreds that will lose their jobs.

In some view, the EcoSport couldn’t have come at a better time. It’s a fresh, bubbly product to give Aussies a preview of what to expect from Ford beyond 2017. It follows in the footsteps led by the Kuga, a vehicle that is becoming an increasingly popular model in the competitive small SUV segment.

The EcoSport is one of Ford’s latest global vehicles as part of the ‘One Ford’ campaign. Although the original model was designed for and has been on sale in South America since 2003, the new EcoSport is a pioneer on an international scale.

It’s one of the first super-compact SUVs. Soon, you’ll see similar products being introduced from all of the big-name carmakers. The layout is all about urban mobility and convenience with the practicality and freedom of a jumped up SUV-like wagon.

In Australia the EcoSport is available in three trim levels with two separate engine choices. The highlight of the two is the (Australian debut) multi-award-winning 1.0-litre turbo three-cylinder EcoBoost. We think this is one of the most charismatic and interesting little units on the market.

All models are front-wheel drive and are available with either a five-speed manual or a six-speed dual-clutch auto.

Here we’re testing the flagship Titanium model grade with the manual transmission. It’s available from $25,790.
(Prices start at $20,790 for the base model Ambiente with the less-favourable 1.5-litre naturally aspirated four-cylinder.) 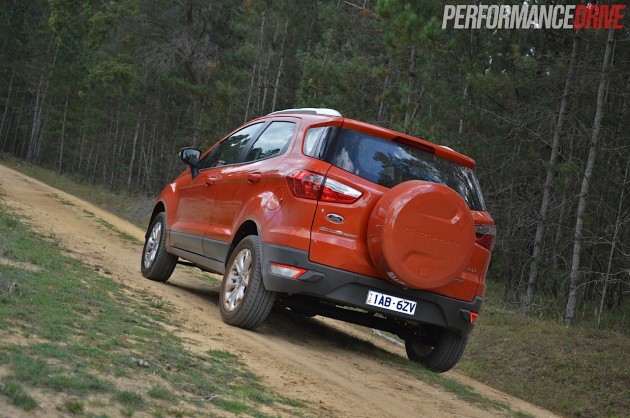 It’s based on the Fiesta so inside you get familiar surroundings with the benefit of a wagon layout at the back. This means front seat accommodation is respectable for this segment, with plenty of headroom and satisfactory legroom. The front chairs are perched up high for that must-have commanding driving position too, making you feel like you’re driving a big macho 4×4.

In the back the bench is pretty narrow and if your passengers aren’t touchy-feely types, you might want to restrict the bench to just two adults.

Ford has fit a reclining bench in the back, which is quite clever as it can effectively increase headroom as well as improve comfort. Having it titled back does intrude on the relatively small cargo space though.

The cargo area offers 346 litres, expandable to 705 litres with the rear seats folded down. Due to the restricted space in the cabin, Ford hasn’t been able to fit an innovative folding design. Instead the backrest simply folds on top of the bench and won’t fold completely flat. Most of the cabin is quite versatile though with up to 20 storage pockets including a six-can glove box.

In terms of overall quality, there are lots of scratchy plastics used for the dash and door trims. The futuristic dash design is carried over from other global Ford models, including the Fiesta, however, it has been revised slightly to improve user-friendliness. Some of the buttons are still confusing and the small blue and black LCD interface can be cumbersome.

Speaking of the interface, it’s all Bluetooth compatible with USB and auxiliary ports for music and smart phone connection. It’s infused with Ford’s SYNC system which includes an Emergency Assistance function that contacts emergency services automatically in the event of a crash (provided your phone is paired).

The top-spec Titanium is reasonably well packaged. It comes with parking sensors with a graphic distance display, hill-start assistance that stops you rolling back on hills, auto headlights and wipers, cruise control, and a leather upholstery. 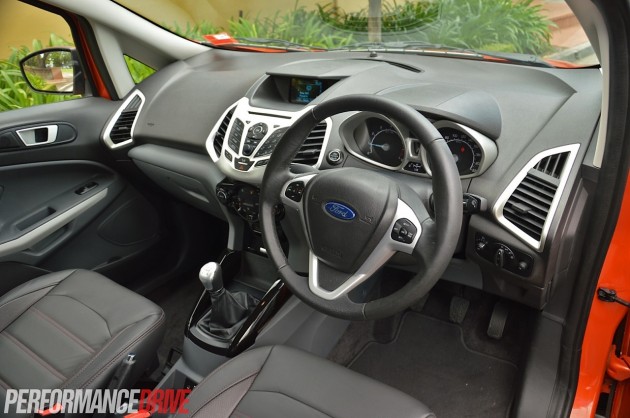 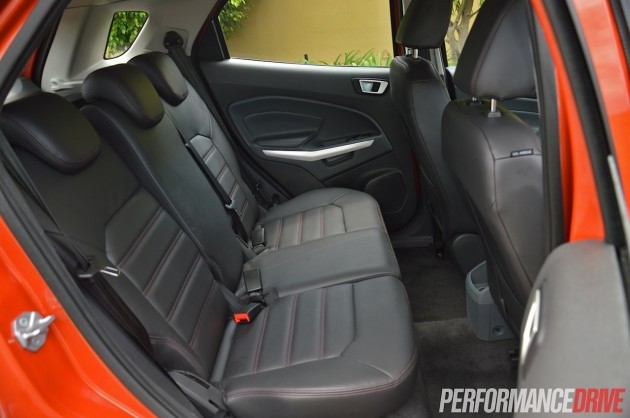 The highlight of this vehicle, for us, is the engine. It makes this product so much more interesting than just a fun little crossover. You might remember Ford celebrating the coveted International Engine of the Year award in 2012 and 2013 for this engine. It thrums along with an odd yet energetic soundtrack, and you can always hear the tiny turbo whistling away, charging the engine with pressure to keep it rotating.

On first impression, the engine has very similar characteristics as a diesel. There’s decent low-down torque with not much up high in the rev range. Accidental wheelspin off the mark happens frequently as you tend to dial in more revs than you need, mainly due to the perception that it won’t offer enough torque. But remarkably, it does.

Mid-range pull is more than satisfactory. In fact, the span of peak torque is quite impressive, with 170Nm on tap from just 1400rpm all the way out to 4500rpm. Such tractability is usually only seen in larger capacity turbo-diesels and V8s.

It’s a fun drive. It feels like you’re going faster than you are which is what makes it exciting and different. It’s straight-line speed and overtaking acceleration isn’t as bad as you might think either, and with the turbo, it does have the ability to surge its way through the rev range. Even up long steep hills in fourth or fifth gear, it will pull you up just fine.

As you might expect with a 1.0-litre engine, fuel economy is excellent. During city conditions we averaged 7.3L/100km. Out on the highway it is a little bit thirstier, averaging around 7.8L/100km. The engine has to work harder to keep momentum on the highway as there isn’t much rotating mass. With only a five-speed manual as well the engine revs pretty high (around 3000rpm) at 110km/h.

Just looking at the EcoSport you might think it’s super light in weight. Unfortunately, it’s not that light, weighing in at 1280kg for this manual Titanium version (over 100kg heavier than the equivalent Fiesta). As a result it doesn’t handle as well as its sibling. The centre of gravity is noticeably higher with somewhat floaty body control and reduced high-speed stability.

If you’re in the market for this type of vehicle though, outright handling and high-speed stability is probably not going to be your main priority. In its natural habitat, weaving around the streets in traffic and suburbia, it’s like a puppy dog that’s found a hole in the fence. It loves to scrounge around, playfully darting into and around corners.

With a quick-rack electric steering system and a technology Ford calls Pull-Drift Compensation to reduce torque-steer, it’s a competent and capable drive for the environment it is designed for. Active Nibble Control also helps to dampen vibrations sent through the steering wheel.

If you’re in the market for one of these little pretend SUVs, you’re probably going to at least have some interest or urge to go off road at some point. The EcoSport is perfect as it is able to have a blast through some ruts and mud tracks without the side-effects of a heavy-duty 4×4. It’s also very easy to drive and navigate through tight or tricky areas.

On the Titanium you get 16-inch alloy wheels wrapped in semi off-road 60-series 205mm tyres with a mildly aggressive tread pattern. The tyres really help it to tear over most off road surfaces, and the 200mm ground clearance allows you to clamber over some fairly demanding mounds and rocks. Of course, two-wheel drive is the main limit that will stop you from exploring more serious terrain. 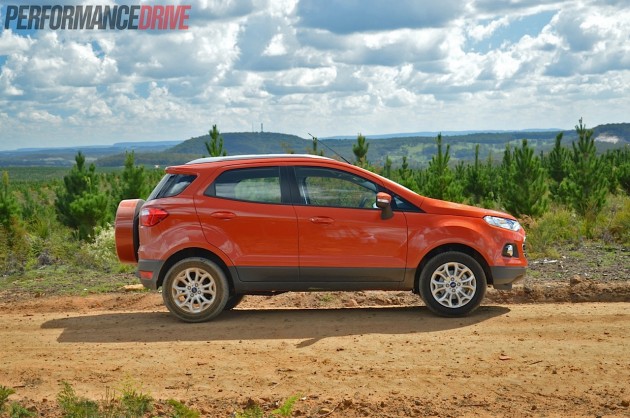 It’s worth buying because of that EcoBoost engine alone. It’s an interesting unit and one that always keeps you entertained. And, of course, it sips on fuel.

While it’s not quite as dynamic to drive as the Fiesta, it makes up for it with a good off-road attitude, which means you can take it further than any Fiesta will take you. It’s also more practical and overall more invigorating to drive.

Manual transmissions are a dieing breed, and we hate that, but in this case we would go for the six-speed auto. It offers a more suitable spread of ratios for the engine and the engine doesn’t rev as high on the freeway. 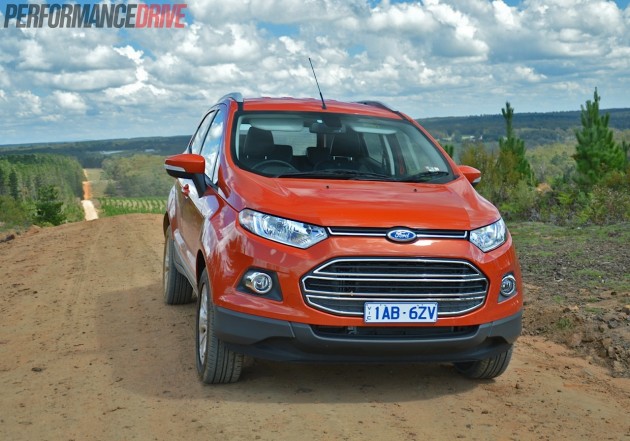