Nismo has pulled off a pretty cool stunt by racing an extreme base jumper through a mountain range in Switzerland. The stunt is the first of a series of new films which will be released, showcasing the technology and spirit of the Nismo brand. 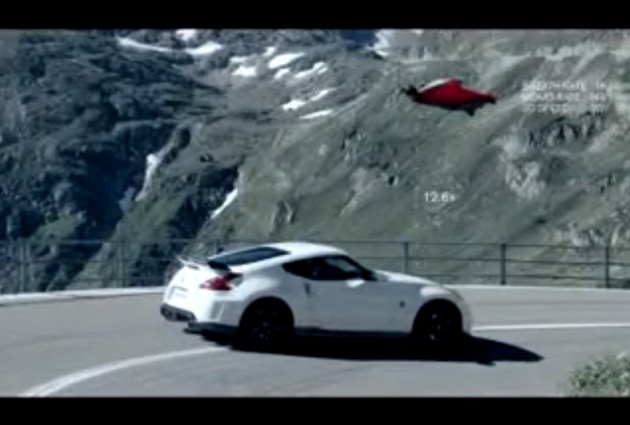 In the race, Nismo uses its latest Nismo Nissan 370Z (not sold in Australia) with Germany’s 2012 Nissan GT Academy Champion Peter Pyzera behind the wheel. Flying through the air is a world-renowned base jumper Dave Barlia.

The event took place at the spectacular landscape of Susten Pass in Switzerland, showcasing some of the advanced technologies used by the Nismo Athletes during the Driver Development Programme at the Nismo Lab.

While Barlia had to navigate his way down and across using pretty much nothing but a special wingsuit, dropping 1372 metres and reaching speeds of 210km/h, Pyzera in the 370Z had to negotiate a string of tight twists and turns. Pyzera spoke about the race soon after, saying,

“That was absolutely amazing, I could see Dave up above me and I just had to concentrate and get in the zone to beat him down. Afterwards we looked at the data we gathered from wearing the biometric harnesses, which monitor my biometric data, and I could see when I was totally focused.”

As previously reported, Nismo is becoming its own sub-brand and is planning to launch a range of new vehicles in the near future. The highlight of which will be the new Nismo GT-R. Nissan Australia is still assessing a potential local brand introduction.

Click play below to see how the epic race turned out. The second video shows some behind the scenes footage on how the race was put together.